Q: As America's most eminent Batmanologist, what do you think of all the hullabaloo over whether Bruce Wayne or Batman is the mask? -- Molly, via email

A: Honestly? I think it's probably the most overrated truism in comics.

I was around 13 when I first heard the idea behind it, that Bruce Wayne was just the "mask" Batman wore rather than the other way around, and my mind was totally blown by this sudden new insight into how my favorite character works. It's a very, very useful bit of shorthand that gets across the idea of how dedicated Batman is to fighting crime, and how much his life changed when he decided to devote himself to eradicating evil.

It's even been adopted by a lot of creators as a core tenet of the character, and gained a lot of traction on fans in the Batman Beyond episode where Old Man Bruce talked about how he even thinks of himself as "Batman" rather than "Bruce Wayne."

It makes a great sound bite, but it's a very simplistic view of things, when the reality -- or at least, as close to "reality" as you get with fictional characters -- is far more complex.

The idea of the secret identity and the alter-ego is one of the most appealing things about super-hero stories. The fact that Superman takes off his cape, puts on a pair of glasses, and goes to his day job isn't just a great plot device that allows for a supporting cast of nosy reporters that are constantly falling out of helicopters, it's also an aspect of his character that makes him far more relatable than any walk across the country. For all his power, he still has deadlines to make and a crush on the girl at the next desk.

Incidentally, I've often heard the "Bruce Wayne is the disguise" argument delivered as a direct contrast to Superman, whose farmboy values are usually cited as a reason why the "real" half of that relationship is Clark Kent. This is equally flawed logic, but I'll get to that in a minute.

With Batman, the idea of relating to the secret identity is blown out of the water the minute words like "billionaire playboy" and "stately Wayne Manor" hit the page, and as a result, it's easy to see the "Bruce Wayne" identity as being nothing more than a storytelling tool. Batman has no super-powers, so he has to have metal boomerangs, bulletproof Dracula costumes and a sweet muscle car to compensate, which in turn means that he needs a logical way to pay for all this stuff. Thus, he's not just a billionaire, but a billionaire who owns a company specializing in high-tech non-lethal technology that just happens to be exactly what the well-dressed vigilante is wearing this season.

If Batman is truly the "real" version of the character, then his need to be "Bruce Wayne" starts and ends with how he can put the Wayne fortune and resources to good use fighting crime. And while there are plenty of stories where that's exactly how it works, and while that's a perfectly fine use of those plot threads, it's a very shallow characterization.

Nobody only thinks about one thing all the time -- not even when the person is me and the thing in question is Batman -- and a well-developed character isn't devoted entirely to going about their goals in exactly one way, even if it dominates his life.

Now, it's certainly true that while "Bruce Wayne" is out and about on the Gotham City Social Scene, drinking ginger ale instead of champagne and romancing supermodels, he's definitely playing the role of a wealthy dilettante, which is not what he is. But it's also true that when he drags a crook up to the top of a building and threatens to drop him fifty stories unless he coughs up the whereabouts of the Riddler's hideout, he's playing the role of a murderous psychopath, which is also not what he is. Batman would no more drop that guy to his death than he'd spend the rest of his life having cocktails with the rest of the Drones Club.

They're both acts to a point; neither one is the truth about Batman/Bruce Wayne, but neither one is entirely a lie, no more than you're lying by acting differently at Thanskgiving dinner at grandma's house than you do when you're out at a bar with your friends. We all act differently depending on the context of our situations, and Batman's no different. Admittedly, he hides a larger portion of his life than most people and his extremes are a little more, well, extreme, but he's a super-hero. They don't do things by halves.

I think that the idea that there has to be a division in Batman is a false notion that was fueled by Rorschach from Watchmen: 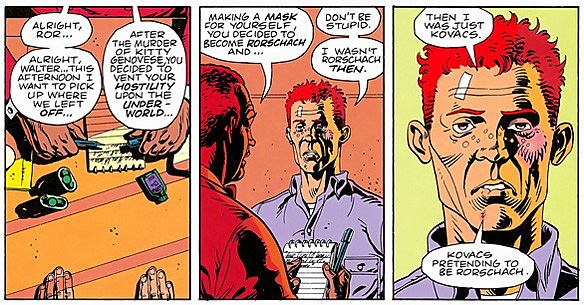 With Rorschach, there is a clear division between the two identities, specifically of one ceasing to exist when the other comes around. With Watchmen being as great and influential as it is, a lot of people latched onto this as being the definitive portrayal of the kind of masked vigilante character that Batman embodies, but there's a world of difference between the two characters. In this regard, Rorschach -- the uncompromising vigilante who came up surrounded by violence and was motivated by a tragedy to destroy what he saw as "evil" -- has a lot more to do with the Punisher.

Batman, however, isn't broken as a person in the way that Rorschach or the Punisher are. He certainly has a tragedy in his past that set the tone for everything he does now -- and he's certainly not known for being all that keen on compromise -- but the motivation is different. It's crimefighting, not vengeance.

When done well, Both "Batman" and "Bruce Wayne" have the same goal, and the person at the heart of both uses those resources to further it. And unsurprisingly, one of the creators who best gets this is Grant Morrison.

In Morrison's run, Batman is consistently shown as being a man who does everything in his power to stop crime at every level. One of the common arguments that people often go to in order to dismiss Batman as a character is that dressing up in a costume and beating up the mentally ill doesn't do a whole lot to effect real change, but as Bruce Wayne, that's exactly what he does. As a billionaire philanthropist, he creates charities, employs reformed convicts, gives misguided people second chances and donates a massive high-tech crime lab to the GCPD free of charge, and as a super-hero, he stops muggings, murders and the literal destruction of the city. In both aspects, he's devoted to fighting crime, but he doesn't go about it one way or another.

In other words, it's Batman who punches out the abusive pimp... 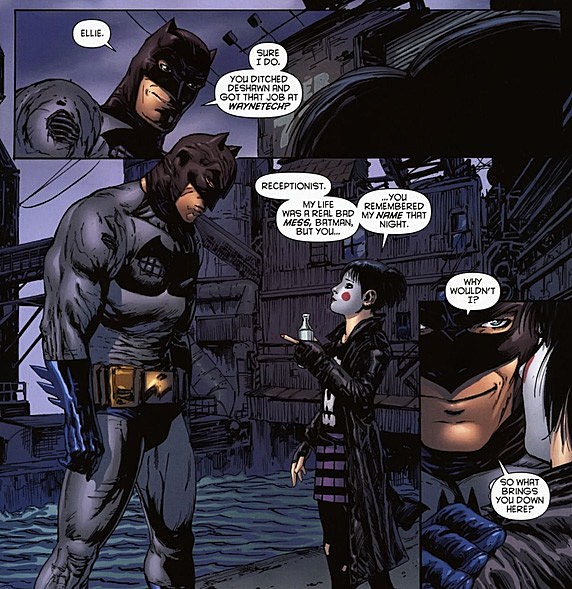 ...but it's Bruce Wayne who gives the girl a way to find a better life.

Incidentally, the other major incarnation of Batman that gets this exact aspect of the character right, showing Bruce Wayne to be just as invovled in the social aspects of crime prevention as Batman is in bringing down crooks? The 1966 Batman TV show.

"Bruce Wayne" and "Batman" are just two names for the same person, and, as I said before, the same applies to Clark Kent and Superman. Superman doesn't really need a job -- it's not like he's got rent to pay on the Fortress of Solitude -- but assuming that he wants to have a secret identity and not be Superman all the time, Clark Kent could do quite literally anything for a living. He could even stay in Smallville and work on the farm between Justice League meetings.

But instead, Clark Kent becomes a reporter for a major metropolitan newspaper, meaning that his actual day job is to seek out truth and expose the guilty to justice, in a way so American that they put it in the First Amendment. In essence, Clark Kent and Superman both stand for the same things, just like Batman and Bruce Wayne both battle against crime in specific ways. Same person, same goals, but a wide range of methods.

The end result -- and the end result of every character who has this kind of thought and development put into them over the years -- is a character that's far more well-rounded than he would be otherwise. They might act differently in different situations, but at heart, Batman and Bruce Wayne are the same person. After all, it wasn't Thomas and Martha Man who got shot in front of their young son Bat.

Q: You walk into a pizza place. They have to machines: Mortal Kombat II and The Last Action Hero pinball game. 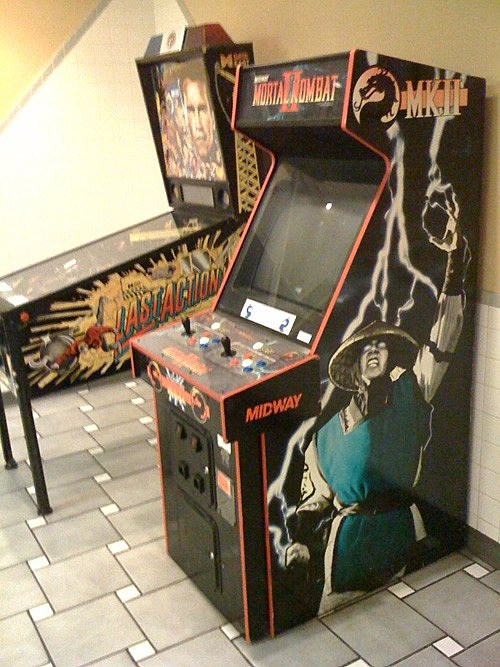 You only have one quarter. Which do you choose, and why? -- Jen Vaughn, via phone

A: This is maybe the easiest question I have ever gotten for this column: Last Action Hero all the way.

As for the why, well, can we all come together as a society and finally admit that Mortal Kombat was just not very good? Say what you want about me being a Street Fighter partisan -- which is true -- but that game seriously got by solely by being a game where you could rip someone's spine out rather than being a game that was actually fun to play.

Plus, it's a simple matter of economics. I am terrible at Mortal Kombat, which means that quarter is going to last me about 90 seconds -- two minutes if I pick Scorpion, because I think I can still remember how to do the spear move from reading GamePro in 1992, and the ol' "GET OVER HERE!"/uppercut combo would probably get me through the first level.

Admittedly, I'm not that much better at pinball, but holy crap, look at that thing! It's a pinball machine based on the most (only?) metatextual Arnold Schwarzenegger movie, and it has a police siren on the scoreboard. Not only is that awesome, but I'm going to go ahead and say that there's a pretty good chance that if I hit the right spinner... 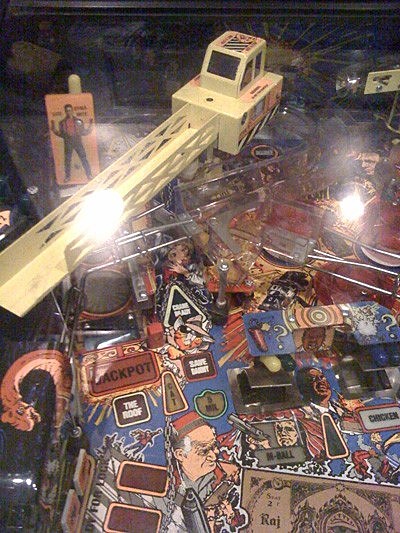