Q: Which DC characters would best exemplify the traits required to wield each of the Elements of Harmony from My Little Pony: Friendship is Magic? --Julian, via email

A: Finally. The question I have been waiting for. 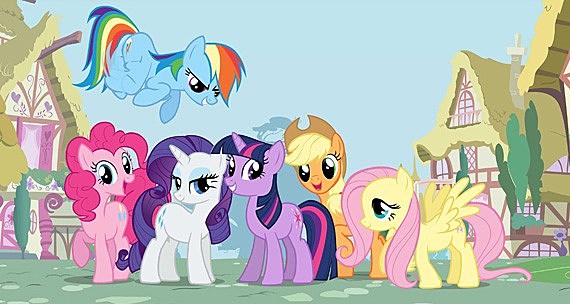 That's right, everybody: As much as I might've built up a reputation as a guy with an undying love of stories where batman chin-checks evil in all its various forms and the Punisher's nigh-incalculable body count, I am also a guy who owns every installment of the Bring It On pentology on DVD, so it probably won't surprise anyone to know that I have been watching the heck out of the new My Little Pony cartoon. So Julian, believe me when I say this: I have given this question a lot of thought.

For those of you who haven't been watching it, Friendship is Magic -- which airs on Hasbro's network, The Hub, and is produced, directed and developed by former Powerpuff Girls and Foster's Home For Imaginary Friends producer Lauren Faust -- follows the adventures of six talking, wide-eyed ponies who live in a truly inexplicable world where creatures without opposable thumbs have invented things like cowboy hats school desks and bakeries. Admittedly, the unicorns seem to have the power of telekinesis, but still, there's some pretty dubious sociology at work here. 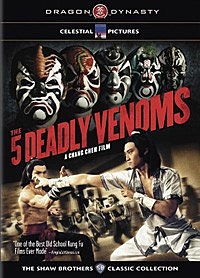 Specifically, the show revolves around six specific ponies, and much like The Five Deadly Venoms, they each represent a specific element of a greater whole. The difference, of course, being that instead of an unbeatable kung fu style based on different poisonous animals that have to be taken out before their fighting skills can be used for evil, they're all about being friends.

Other than that, though, it's pretty much the same thing.

At the start of the show, Princess Celestia -- All-Powerful God Queen of Equestria -- sends one of her minions down to Ponyville so that she can learn how to harness the six Elements of Harmony in order to stop her sister, Nightmare Moon from unleashing eternal night. Seriously. That's what the pilot's about. Fortunately, said elements just happen to reside in the first five ponies the minion meets, leading to a pretty handy resolution. Of course, the downside is that this is a show that opens with a massive thousand year-old conflict for the fate of the world and then moves into bake sales and apple harvests, but hey, that's life.

As for just which elements correspond to DC Universe characters, we're going to have to take a closer look. 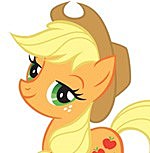 First up, we've got Applejack, who represents the spirit of Honesty. Now, there are a lot of super-heroes in the DC Universe that are all about not telling lies -- Wonder Woman was the actual Goddess of Truth for a little while, and being totally honest is a prerequisite for membership in the Green Lantern Corps -- so in order to narrow it down, we're going to have to look at what else defines her.

Applejack once received an award for going out of her way to help the citizens of Ponyville, and, more importantly, was raised on her family's farm. So let's see here: Raised as a farmer and devoted to truth and helping others? Sounds to me like we've found ourselves a Pony version of Superman. 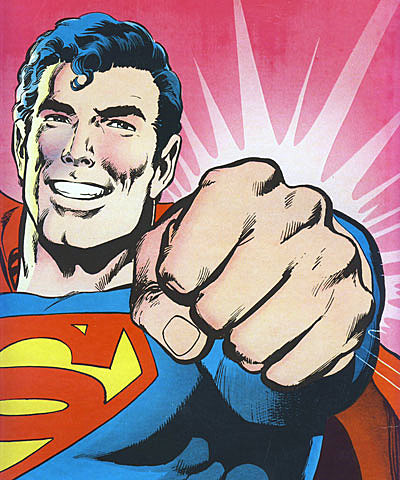 Admittedly, Applejack doesn't have Superman's invulnerability -- she once pushed herself to the point of honest-to-God hallucinations while trying to harvest an entire orchard by herself -- and as of 14 episodes in, she has yet to show even the first sign of heat vision. I'm like 80% sure that she wasn't rocketed to Equestria from the doomed planet Ponypton, but I think the connection stands.

Next up is Rarity, the pony of Generosity, which in the world of My Little Pony pretty much translates to constantly trying to stuff her friends into corsets, though admittedly she once cut off her tail so that a clinically depressed water dragon could use it to replace half of his moustache.

I may not have made this clear at the start, but this is kind of a weird show.

Anyway, if you think about generosity in the DC Universe, it's hard to beat Batman, seen here enjoying his little pony: 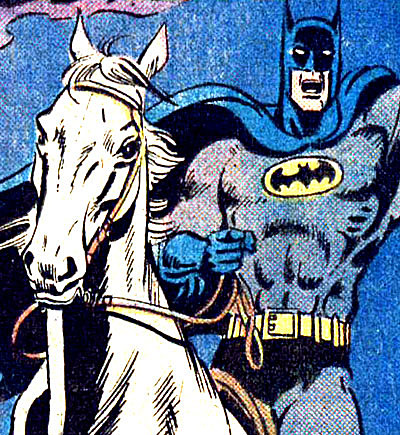 Batman might be more closely associated with things like vengeance, but sadly, a vengeance pony has yet to be introduced into the show's continuity. Even so, he totally fits for generosity: Not only does he literally run a billion-dollar charitable foundation, but he also gives up his own time in order to help clean up the streets of Gotham City and giving good homes to orphaned circus folk. And if nothing else, he's pretty generous when handing out uppercuts. 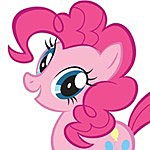 Next comes Pinkie Pie, the extreme extrovert of the My Little Pony universe. Her signature element is Laughter, and that means that she spends most of her time bouncing around, playing practical jokes, making up songs and generally annoying the living crap out of everyone in the vicinity.

Of couse, she also laughs in the face of certain doom and once plotted revenge on a griffon for being a jerk to her friends, which involved both psychological manipulation and shocking her with a joybuzzer.

You can probably see where I'm going with this: 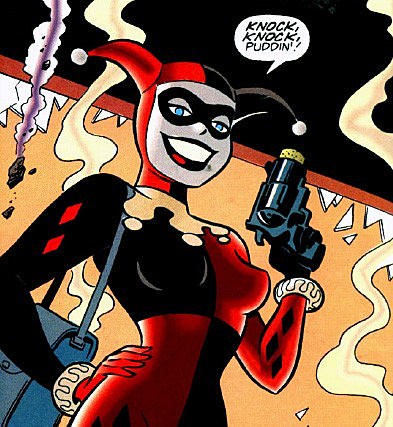 Much like Pinkie Pie, the Joker's henchwench Harley Quinn often annoys her closest friends, although getting on, say, Applejack's nerves down at the pony bakery tends to carry a significantly smaller risk factor than stepping on a punchline being delivered by a psychopathic murderous clown.

Of all the Ponies, I had the hardest time coming up with a DCU counterpart to Fluttershy. In addition to being the soft-spoken member of the Pöny Crüe and the resident animal lover -- which raises the question of just what constitutes an animal in a world populated by talking horses -- she represents Kindness.

Now, there are plenty of folks in comics that I'd consider to be good folks, but finding someone defined by kindness in a genre pretty much built around punching out crooks? It's tough. Fortunately, I was able to ask writer Jeff Parker his opinion on the matter, and he had the solution: Captain Marvel. 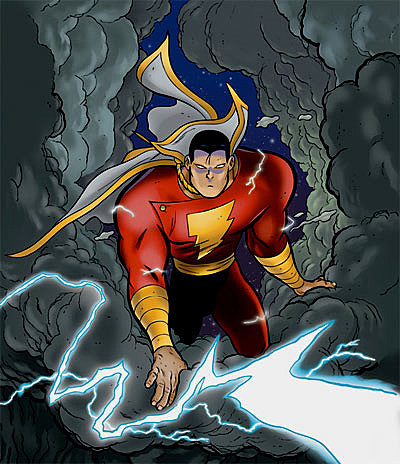 It fits, too. I mean, Billy Batson is a kid who was given magical super-powers, and then decided to share them with his sister, not to mention the entire rest of the Marvel Family and the occasional anthropomorphic bunny. I mean, I have a sister, and I wouldn't even share a pudding cup with her, let alone anything even resembling the Power of Zeus. 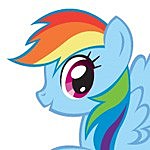 Rainbow Dash is arguably the most awesome of all ponies. She represents the element of Loyalty, but that's beside the point, as it is her job to keep it from raining by flying around kicking clouds in the face. Just so we're clear on this: She controls the fundamental forces of nature by kicking. Awesome.

So awesome, in fact, that she can only be represented by someone who is both loyal and whose adventures are nowhere near the realm of possibilty. In other words, she's totally Jimmy Olsen. 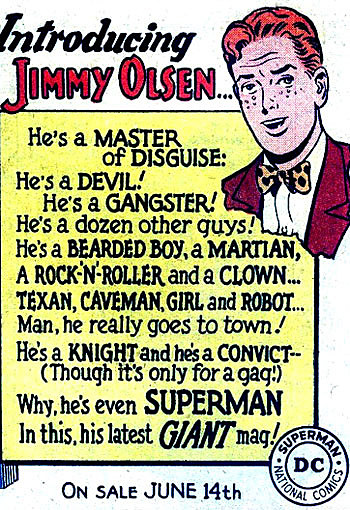 Despite the fact that there are a couple dozen Jimmy Olsen comics where he and Superman turn on each other for various reasons, at the end of the day, he is Superman's Pal -- it says so right in the title. And really, is a talking horse with rainbow hair that controls weather by beating up clouds any weirder than a dude who was turned into a porcupine-man by a magic imp from the Fifth Dimension?

Finally, we have Twilight Sparkle, and in the interest of full disclosure, I do want to point out that she was totally my result in the Which Pony Are You quiz at the Friendship is Magic website, which by this point you have to expect I have done. She's the de facto leader of the group, reporting directly to Celestia, and represents the extremely vague and nebulous ideal of Magic.

Given the title of the show, you might expect "Magic" to be a metaphor for the power of friendship, but no: It is straight up actual magic. In addition to the standard issue horn-induced telekinesis, Twilight Sparkle has incredible sorcerous powers, which she once used to battle a giant pony-eating spectral space bear.

Also, for someone meant to be learning about the power of friendship, she can be pretty judgmental. And that puts her right in line with her DCU counterpart: John Constantine. 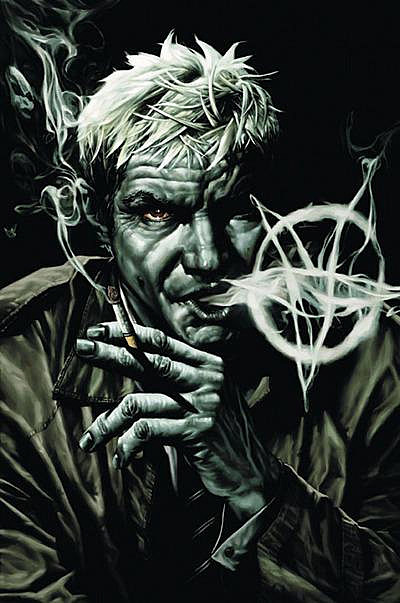 It might seem like a stretch to link My Little Pony to Hellblazer, given that one is a strange, often horrifying look at a world of constant betrayal, strange magic and a world constantly teetering on the brink of annihilation, while the other is about John Constantine, but I stand by it.

The similarities speak for themslves.

Q: Destro Vs Doctor Doom in a wrestling match, no rules, who wins? -- @Koltreg

A: Wrist rockets notwithstanding, Doom has Destro outmatched in pretty much every way. The only advantage Destro has is that if it's truly a No DQ match, he'd be able to call in the forces of COBRA to help him out in a Four Horsemen/nWo/Nexus type of situation. Even then, I'm pretty sure Doom takes out everyone but Cobra Commander, who has the good sense to get out of there while Doom's beating on othe Dreadnoks.

Q: What do you say to someone who doesn't like fun/silly stuff in comics because he thinks it all needs to be "adult"? -- @quietprofanity

Q: Post-adolescence, ever had a comic that brought a tear to your eye or otherwise elicited a spontaneous public outburst? --

A: Oh, totally. I know it's hard to believe, what with the fact that I'm a vocal fan of My Little Pony: Friendship is Magic, but I can get pretty emotional when it comes to my entertainment. The scene in JLA #41 where everyone in the world gets super-powers and they all go to save Superman because of all the times he's saved them? One of three things that never fail to make me mist up a little.

Q: Batman will not normally use guns for obvious reasons. But what if his parents had been punched to death instead? Would Bruce have then embraced the Cable lifestyle over martial arts? -- Matt, via email

A: Batman's parents could never be punched to death. I mean, have you seen Thomas Wayne? 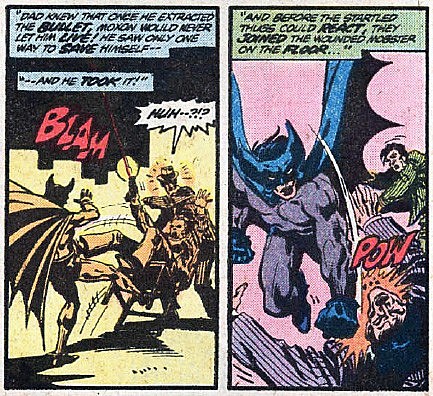 Dude is just like Batman, but with a Burt Reynolds moustache. He's Half-Batman, Half-Bandit. Frankly, I'm surprised a bullet did the job.