(Click for the Ask Chris Theme Song by the Ampersands!)

Q: You've mentioned that you believe Batman to be the most versatile DC character, but who is the Marvel equivalent? -- @Zbg333

A: You know, I get a lot of questions asking me to stack Batman up against various Marvel characters as though I'm some sort of... Moonknightologist, but this is one that addresses something that I find pretty interesting: The idea that Batman is one of the few characters that works in any kind of story.

There's a convergence of influences at Batman's creation that leads to him being a character that has as much in common with pulp avengers like the Shadow as he does with Superman, and who displays equal parts Sherlock Holmes and Doc Savage. As a result, he lends himself to a spectrum of adventures that other characters don't, from action to mystery to science fiction to comedy. It's just as true to the character to see him busting up organized crime on the streets of Gotham City as it is to see him battling Darkseid on the planet Apokolips or, as seen at left, wearing a gorilla suit and being menaced by tentacles.

Admittedly, there are people who don't share that view, who only want to see Batman in gritty, noir-style adventures where he fights believable crooks like the Joker, and who view stuff like the Brave and the Bold cartoon as a watered-down shadow of what the True Batman really is.

But those people weren't on national television as a Batman expert this week, so I guess that makes them wrong.

But putting aside my boundless ego -- a task that darn near takes a forklift at this point -- this does speak to one of the more frustrating quirks of super-hero comics fans and creators: The tendency to tie characters to very specific takes, and a refusal to acknowledge anything that steps out of those bounds. Really, as much as Batman might be the character who works best in the widest variety of stories -- which is as much a tribute to how much creators have done with him in seven decades of being one of the most popular characters in fiction as it is to anything else -- all you really need to tell any kind of story with a character is to stay true to what that character stands for.

In super-hero comics, there's a lot of weird stuff floating around. You might prefer to see Batman as a street-level vigilante detective, but also lives in a universe with an outer-space police force of people with magic imagination rings that named themselves after flashlights, so weird stuff is going to happen. Or to put it in Marvel terms, there's no reason that this... 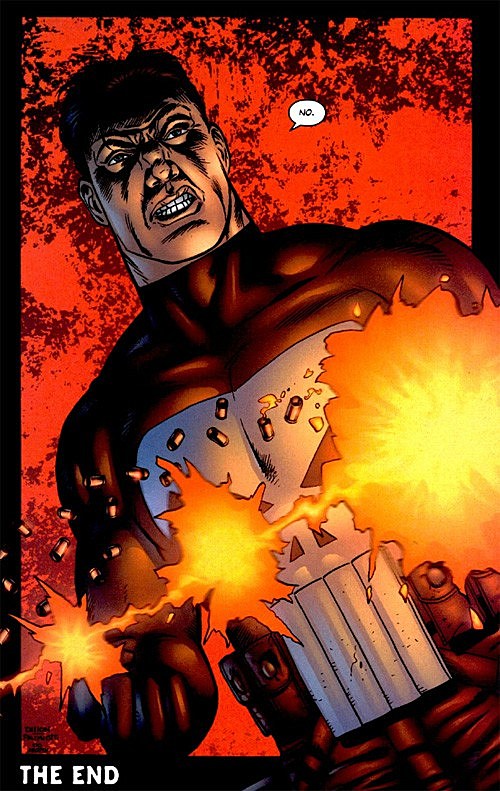 ... is any more intrinsically worthwhile than this... 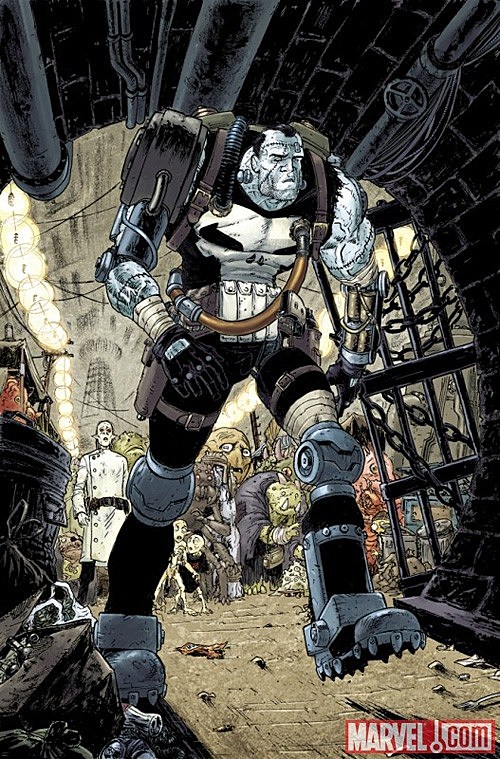 ... especially when you consider that the one many fans regard as being a more serious take on the character is also the one that involves decapitation-by-polar-bear and an unstoppable hitman who speaks with a Boris Badenov accent being smothered to death by the morbidly obese.

And believe it or not, this... 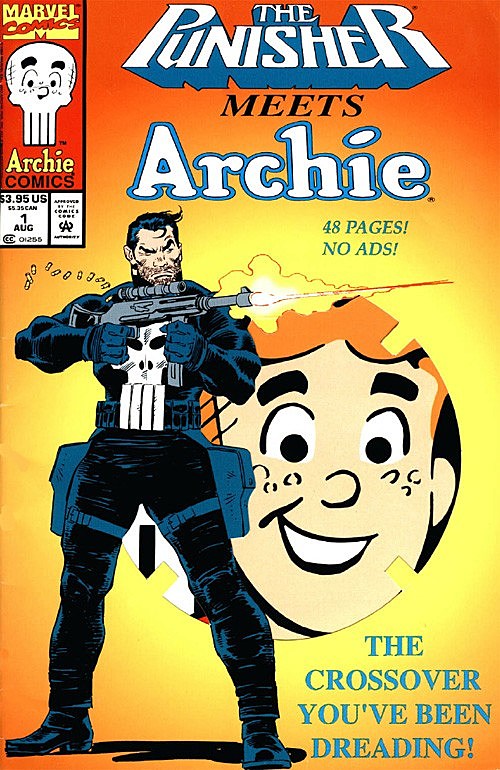 ... is not only a highly enjoyable comic, but one that manages to stay true to both of its lead characters at the same time.

Of course, like I said, some characters lend themselves to different types a little easier than most, and as far as who can fill prety much any role in the Marvel universe, that's a pretty simple answer: Benjamin J. Grimm himself, the ever-lovin' blue-eyed Thing! 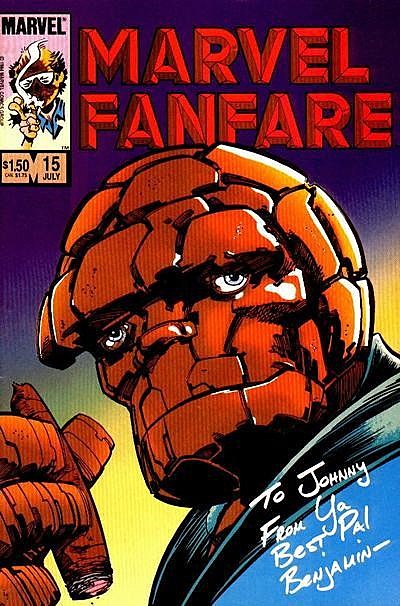 Again, I think it's an aspect of his character that has a lot to do with his origins. In the Fantastic Four's first appearance, the book that formed the basis for the entire Marvel Universe, they're changed into super-heroes by "Cosmic Rays," and that's a premise that sets a certain level for what comes after. Just the nature of the word "cosmic" conjures up images of the sort of images that are associated with the FF: big, world-shaking battles against grand-scale threats like Galactus and trips through the dimensional barrier to the Negative Zone, you know. Cosmic. And as the muscle of the FF, the Thing fits right in.

But there's something else at play here. If the FF is a family -- which has been one of the core tenets of the book since the very beginning -- then Ben's the outsider. Reed, Johnny and Sue sort of orbit each other, but for all intents and purposes, Ben's more "friend" than "family." That doesn't mean he doesn't fit in with the rest of the team, but while it's hard to imagine the other members without each other, the fact that the Thing isn't related makes him easier to spin off into his own adventures.

And then there's the fact that more than anyone else, the Thing represents that defining characteristic that set the Marvel Universe apart from its Silver Age DC counterpart: His power doesn't come without a price. He may be cosmically tough and strong, but in appearance, he's a monster who -- at least at first -- inspired just as much fear from the people he's saving as the villains he fights, actions which in turn underscore the humanity beneath that rocky surface.

It's the same basic idea that Marvel would later expand on somewha successfully in an obscure title called The X-Men. Some of you may have heard of that one.

Anyway, that leads to the idea of what drives the character of Ben Grimm when he's not punching out Annihilus with the rest of the FF. Reed Richards, for example, was always a super-genius, and even now, that's what defines him more than his powers. Ben, on the other hand, was a daring pilot willing to take a risky journey in order to protect his pals, and that's what establishes his love of adventure and defines him as a character.

Throw in the fact that he's the most enduring link between Kirby's pre-FF monster comics and the super-heroes of the Marvel Universe, and it all combines to give you someone who's a good man from the streets of New York who was trapped in the body of a monster by incomprehensible cosmic forces, who wants to do good by using his strength to protect others. And that's a character you can do anything with, even before you throw in the idea that his best friend has a "Pogo Plane" that provides a convenient plot excuse to get him anywhere in the world that you want to set a story. 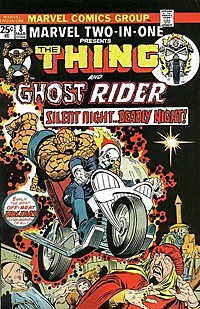 That's one of the reasons that Marvel Two-In-One is one of my favorite series of all time, and not just because it's a hundred issues (plus annuals!) of an orange rock monster teaming up with a different super-hero every month to punch the livin' crap out of bad guys.

Well, actually, that's exactly why I love it. This was a book where the Thing teamed up with everyone, from Dr. Strange to Luke Cage to ROM: Spaceknight. Sure, Spider-Man might've had a longer run on the more well-known Marvel Team-Up, but those rarely saw him out of his defined element of web-swinging and wall-crawling around Manhattan, and when they did, the fact that he was out of his element was often one of the driving forces of the plot.

The Thing, however, just melded right in with whatever he was faced with that month, and even when that unfortunately meant the creation of dudes like the Aquarian, it says something that the Thing could go from punching out space witches in Central Park with ROM to chilling with what essentially amounted to Space Jesus.

As a result, the Thing became one of those characters that can work in a story dealing with virtually any theme. He can be introspective and question his role in the world and whether he can even be considered human anymore like he did in "This Man, this Monster"... 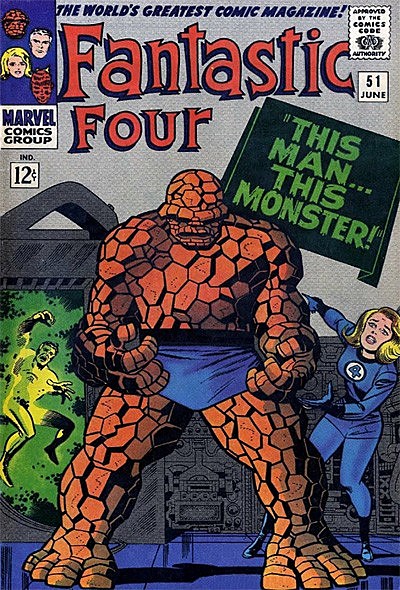 ...or he can fight a gang of surly Hulk robots and then crack wise while celebrating with a super-hero poker game, like he did in Dan Slott's criminally underrated The Thing. He can go toe-to-toe with cosmic-powered world-beating bad guys, or he can join a super-powered professional wrestling promotion.

Heck, you can even combine the two and still get a great story: 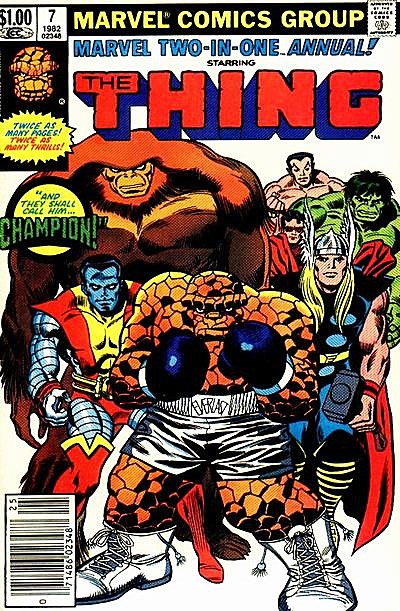 Seriously, that is a story where the Thing has team up with a bunch of other super-heroes who all enter the ring for a cosmic boxing match against a guy called The Champion of the Universe. And it's awesome. There's Action, Comedy, Sci-Fi, and if you throw in Alicia Masters, you've got Romance covered too.

The guy even works in ghost stories. 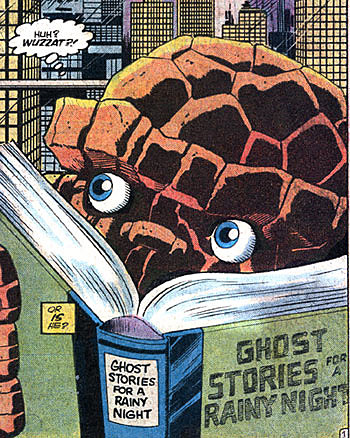 Or at the very least, while reading ghost stories, which is just as good.

Q: Let's say, hypothetically, that I had two comic book options to choose from: I can either purchase the recently-released trade paperback collection of the first six issues of Nick Spencer's new Image series, Morning Glories, or I can purchase all eight issues of Kirby's O.M.A.C.: One Man Army Corp. Keep in mind, I have the reprint collection of OMAC that DC put out last year – and it is a thing of beauty – but these are the real deal, in all their faded newsprint and benday-dotted glory. Which do I choose? Show your work. -- Dylan, via email

A: This question actually came in a few weeks ago, so hopefully I'm in time to help. Now, obviously, a run of OMAC is worth having; at the very least, you get the text piece in #1 where Kirby predicts the future in his typically amazing style...

...but consider this: You've already got those stories. Do you think Kirby himself would want you to buy the same thing you've already read, or go for something that's both new and creator-owned? I never met the man, but I'm guessing he'd go for the latter.

Q: Now that you're an Official Batman Consultant, are you going to let your fame go to your head? -- @Metz77

A: Last week, I referred to myself in this very column as a "philosopher king." I don't think there's any room left for my ego to expand.

Q: What comic had the worst art ever? My vote is for mid-80s Jonah Hex. -- @alogicalfallacy

Q: How is each My Little Pony aspirational-rad-positive for a growing young lady? I ask because I find Pinkie Pie "difficult." -- @MartynEm

A: That's right, everybody! It's time oncea again to close out Ask Chris with another installment of The Journal of Pony Studies!

I think you're being a little too harsh on Pinkie Pie. Sure, she can be a little overbearing and scatterbrained and is the voice of superstion in Ponyville, and there was definitely that one time where she assumed a zebra was an evil enchantress (who does evil dances) because she looked different, but the important thing is that she has good qualities that help her overcome the negative ones. Specifically, Pinkie Pie is more about having fun than the other ponies. She throws a party for Twiligiht Sparkle when she arrives in town to make her feel welcome, which is a very nice thing to do for someone, and even has one in an attempt to change Gilda the Griffon's attitude and help her make new friends. She is of the mind that there is no problem that cannot be solved through partying.

Which makes her the My Little Pony equivalent of Andrew W.K.