A: In a medium that's so driven by serialized storytelling, it is impossible to overstate the importance of a supporting cast. Sure, the heart of any story is the conflict between the hero and the villain, but especially in super-hero comics, the supporting cast provides a viewpoint for readers and interactions that allow for deeper insights than just "boy howdy, this guy sure doesn't like crime."

But while there are a lot of great characters who might not be in the spotlight all the time, super-hero books provide an interesting problem in figuring out just what a supporting cast member is.Take the Superman franchise, for example. At first glance, it's a clear candidate, if only because Lois Lane and Jimmy Olsen are two of the best supporting characters ever created. But they're also something a little more than just supporting cast members, too, and it's hard to figure out how much of what makes them great has to do with their own adventures, in which Superman is often seen as their supporting cast member. 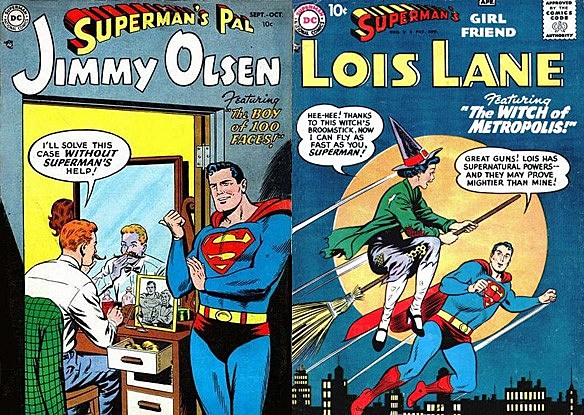 While it's usually pretty safe to refer to a love interest as a member of the supporting cast, it gets even more complicated when you throw sidekicks into the mix. Do Jimmy Olsen and Robin count as support or are they main characters in their own right? And what about villains? Is a supporting cast member anyone in a comic that isn't the main character?

But when most people say "supporting cast" in reference to a super-hero comic, they tend to mean anyone who doesn't have super-powers or dress up like Dracula so that they can battle a renegade botanist, which is the definition I'm going to go with since I don't want to be here all night. But it also means that a few books with really strong casts get knocked out of the running.

Again, going back to Superman, once you get past Jimmy and Lois, it's pretty slim. The most enduring supporting characters, like Steve Lombard, Cat Grant and the rest of the staff of the Daily Planet are generally pretty one-dimensional. I can't really imagine being all that interested in a Steve Lombard solo story -- and they do exist -- and while that's perfectly fine, it's also not exceptional.

But that criteria also means that you have to eliminate some comics that would otherwise be strong contenders, like Paul Grist's incredible Jack Staff. 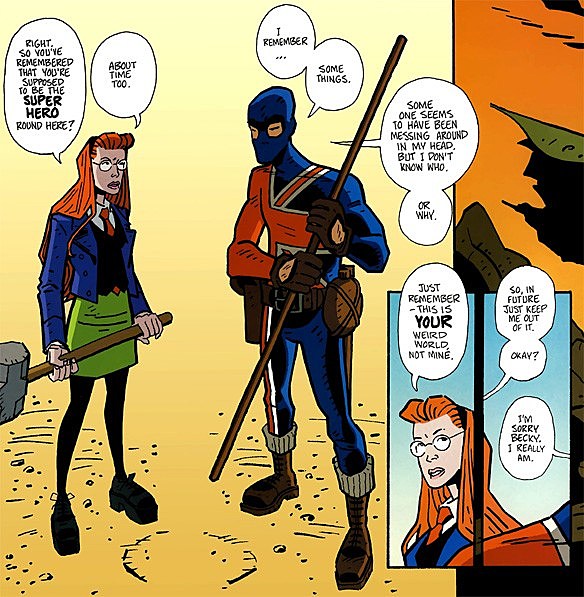 Don't get me wrong, Jack Staff has some of the best, most well-developed and most engaging characters in comics, but the reason for that is that Grist spends as much time detailing their interconnected adventures as he does on his title character. It even got to the point where he retitled the series as The Weird World of Jack Staff, reflecting his focus on the entire fantastic ensemble.

But within those guidelines, it shouldn't come as a surprise to anyone that I'm a pretty big fan of Batman's supporting characters. Not to make this all about the underlying themes of Batman -- because I wouldn't want to do that -- but if the role of the supporting cast is to reflect and illustrate characteristics of the protagonist, his crew does it better than almost anyone else.

You've got Commissioner Gordon, the moral center of Gotham City, who would've been crushed by the overwhelming evil without Batman there to give him the opportunity to rise to the top. You've got Alfred, who manages to convincingly serve as a father figure for a character who's defined by being an orphan, patching up his wounds, providing sound advice, and is even occasionally acting as the Mycroft to Batman's Sherlock: 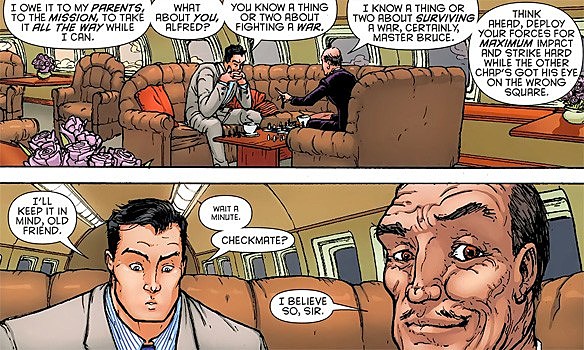 Even characters with smaller roles, like Leslie Thompkins, bring something interesting to the greater mythology. But the keyword above was "almost," and you may want to take note, because I don't say this very often: In this arena, Batman comes in second.

The best supporting cast in super-hero comics belongs to Spider-Man. 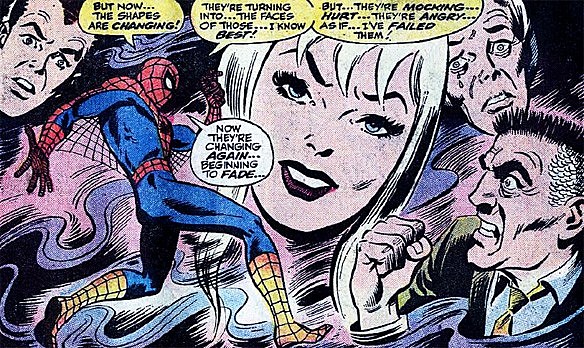 That's probably not a bold revelation for anyone, since the soap-operatic nature of Spider-Man is what set his stories apart from others and helped to revolutionize the modern super-hero. The very nature of the secret identity -- a legacy that goes back past Superman and through the Scarlet Pimpernel -- invites a supporting cast that sees his alter-egos in a different way. But with Spider-Man, the fact that his everyday interactions were just as much of a draw as his super-villain punch-outs led to creators cultivating (and I apologize for this one) a web of characters that not only reflected Spider-Man himself, but also emphasized the duality that resulted from leading a double life.

Almost every character in Spider-Man's supporting cast had a vastly different opinion of Peter Parker than they did of Spider-Man, from Flash Thompson to Harry Osborn to Aunt May to Gwen Stacy. The only one who didn't was Mary Jane, who was later revealed to have been in on the secret all along, but even that points to an interesting pattern among his love interests, in that each one represents a different aspect of his life, and they're all things most people can relate to pretty easily. 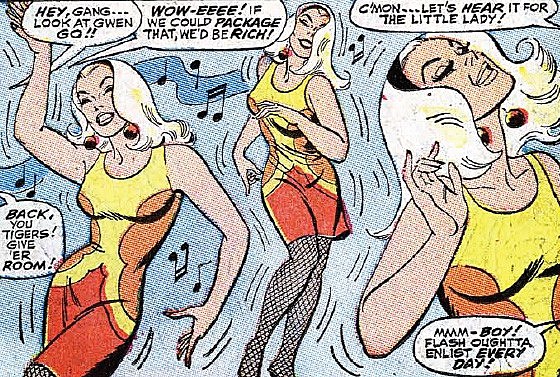 Gwen Stacy is the (absolutely gorgeous) girl that got away, the idealized perfection of his past. I've mentioned before that one of the most appealing aspects of Spider-Man is that the cocky, wise-cracking Spider-Man is the guy that nerdy, introverted Peter Parker always wanted to be and eventually grows into, and the fact that Gwen loves Peter but is at best deeply suspicious of Spider-Man underscores that fact. She's stuck in his past, and never really comes to terms with the person he's becoming as he grows up.

The Black Cat, however, is the (absolutely gorgeous) opposite -- at least, at first. She's sexy, dangerous, and exciting, but she's only interested in the surface. She was interested int he bravado and action that Spider-Man projected, but in one of the most literal metaphors in comics history, she had no regard at all for the actual person underneath the mask. She flat-out refuses to acknowledge his past, instead only wanting to move onto the next thing.

Mary Jane is the (absolutely gorgeous) girl next door who's been there for the whole thing. She knows him better than anyone else, and in the current version of events, that translates into her knowing him a little too well, something that tends to happen with people who have seen you from all sides.

Even Spider-Man's newest love, Carlie Cooper, the (absolutely gorgeous) police scientist, brings an interesting new perspective to things. She's literally a scientist who catches criminals, and as such, she has the potential to understand Peter Parker on an intellectual level and his desire to fight crime. I hope she sticks around.

But there's one character that really puts Spider-Man's supporting cast over the top. The man. The myth. The moustache. America's greatest newspaperman, J. JONAH JAMESON. 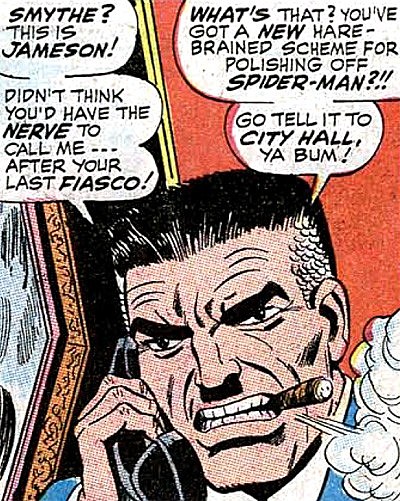 I'm nowhere close to kidding when I say that JJJ's easily one of my favorite characters of all time, and while a lot of that has to do with the sheer hilarity of a dude sustaining that level of anger for 50 solid years, he's actually a surprisingly complex character.

For all intents and purposes, Jonah has as much a claim to being Spider-Man's arch-enemy as anyone else, up to and including the Green Goblin. He constantly attempts to turn public opinion against Spider-Man through his newspaper, and he's even been at the source of creating actual super-villains and killer robots to fight him. But at the same time, when he was being blackmailed for his part in creating the Scorpion, he publicly admitted to it rather than allowing someone else control that information.

The scene in the Spider-Man movie where Jonah -- played by J.K. Simmons in the greatest page-to-screen transition we're ever likely to see -- refuses to give up the identity of the photographer who took pictures of Spider-Man, even while his life is being threatened, is a great example of the idea that there's an unshakable core of integrity to him. For all his bluster and seething explosive hate, he's a guy who's deeply committed to the truth, and he will do everything he can to get that truth in the hands of the people. It just so happens that what he believes to be the truth is completely wrong.

That said, it says a lot about him that he hired an editor like Joe "Robbie" Robertson, who is equally committed to the truth but has never commissioned a machine with the word "slayer" in the name. Robbie's there to keep him honest.

Jonah also provides one of the most interesting plays on Spider-Man's duality, in that Peter Parker not only has to betray himself to his own worst enemy's propaganda machine to make ends meet by selling photos to the Bugle, but in doing so, he's secretly violating the truth that JJJ holds above all else, thus proving him right all along. Spider-Man really is a menace!

And none of that has anything to do with Spider-Man's super-heroics. It's the sort of consistent, character-driven interaction that can only result from a cast that's exceptionally well-defined, and that add an incredible amount to their stories, and in the world of super-hero comics, it just doesn't get any better.

As for the best supporting cast outside of super-hero stories... 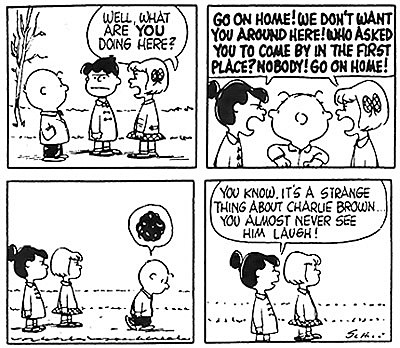 I think that about covers it.

That's all we have for this week, but if you've got a question you'd like to see Chris tackle in a future column, just put it on Twitter with the hashtag #AskChris, or send an email to comicsalliance@gmail.com with [Ask Chris] in the subject line