Q: Seems an obvious choice, but what are the best comic reboots ever? --@jleehenderson

A: I got a lot of questions along these lines this week, and I'm a little surprised about that. Not because I don't have anything to say, but to be honest, I would've thought that everyone would've gotten tired of discussing it a while ago. But in this column, I'm committed to answering the questions you send in, so never let it be said that I don't give my readers what they ask for. It might be difficult this time, though.

I mean, I haven't actually watched ReBoot since they stopped showing it on Cartoon Network about ten years ago. 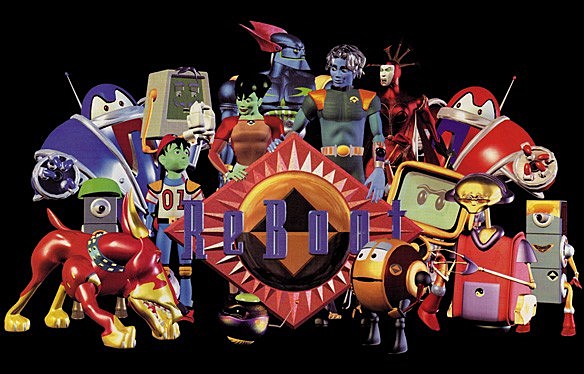 That said, I was a pretty big fan of the show, which probably won't come as a surprise to anyone who was here when I went into excruciating detail about my continued love of cartoons made for twelve year-olds. To start with, the premise of the the show was phenomenally clever. The idea that there was an entire society of innocent digital creatures living in your computer that you were subjecting to a wholesale slaughter whenever you kicked off a game of DOOM was genius.

For those of you who don't know, that's the premise of the show: The city of Townsville Mainframe exists inside a computer, and whenever the User plays a game, a section of that city is blocked off and the population is transformed ("Rebooted") into whatever NPCs the game needs to throw at the player -- you know, zombies, rival racecar drivers, presumably even the Nazi soldiers of Castle Wolfenstein, although I don't think they ever showed that one --until he's eventually defeated. The system has a Guardian program -- in this case, a blue dude with silver dreadlocks name Bob -- who's in charge of going into the games and defending everyone by battling the User in his game of choice.

It's a setup that, like the best serialized fiction, allows for you to do anything in any given episode. Any setting, any exotic locations, any MacGuffin that you want the characters to be going after has an instant reason for being -- you just pop them into the "Game" that drops down onto Mainframe in that episode and you're good to go. You can have a sci-fi adventure one week and a big sword-and-sorcery fight against a dragon in the next and it all makes sense. And because they establish right away that the cheerful Binomes -- the little Ones and Zeroes that made up the entire background cast -- would be mutated into mindless leeches if Bob failed, every episode's conflict has the same sense of danger to it. The stakes of each conflict are equally valid no matter what shape that conflict takes, and the presence of the Viruses in the system provide a great way to complicate things, especially since it's a show that went so far as to show what happened when the heroes lost.

The real genius, though, is the fact that this is a show that appeals to kids who are into video games while also casting those same kids in the role of the primary atagonist. Accepting the premise of the show is accepting that you're the one battling against Bob, and every time you win a video game, you're actually destroying your cartoon hero. It also raises some interesting pseudo-theological implications by presenting a society built around the idea that the omnipotent being in control of the system is at best apathetic and at worst an actual aggressor who literally destroys lives for his own pleasure.

I don't think that idea was ever actually addressed on the show itself, but I imagine there were plenty of freshman philosophy papers handed in circa 1997 that dealt with it in agonizing detail. 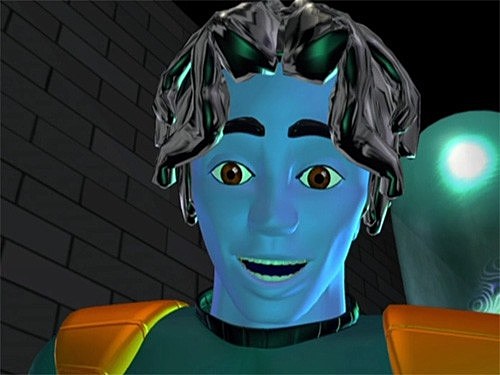 Looking back at it from today -- which you can do thanks to the first two seasons being on Netflix Instant -- the actual animation seems blocky and more than a little awkward at times, but then again, this show came out in 1995. It might not be Toy Story, but for something produced with the technology of the time as a weekly television show, it's actually not bad, and considering that it was meant to echo the graphics of the era's computer games, it held up pretty well in that respect.

The real strength, though, was in the story. It never really approached the level of moody sophistication that you got from the better episodes of Batman: The Animated Series -- because really, nothing at the time did -- and there were plenty of pun-laden catchphrases that started to get pretty annoying about halfway through the second time they were used, but the adventures were consistently, solidly entertaining. Once the series started skewing towards an older audience -- well, older in that it was for twelve year-olds instead of ten year-olds, anyway -- the complexity was raised in longer-form story arcs that still featured plenty of slapstick humor.

Which brings me to the answer to the first question. The best-handled ReBoots in terms of quality were unquestionably the third season.

A lot of kids' shows have a real hard time with going "darker," but ReBoot did it better than most with Bob's "death," young Enzo stepping up and proving woefully inadequate, and being blasted out to the Internet and letting the evil virus Megabyte take over the System. On paper, it shouldn't have worked at all, especially since this as a time before being sent out into the wilds of the Internet was a plot that would've manifested itself in a truly entertaining story of a man battling against seemingly infinite hordes of cats with poorly spelled captions.

What they ended up with sounds like it'd be awful: The show's two youngest characters get rapidly aged, with the girl becoming a "sexy" adult version of herself and the boy basically turning into Cable, right down to the glowing cybernetic eye. In practice, however, it ended up being really good, and in the grand tradition of kids' shows referencing Coen Bros. movies, it was also the season that featured an extended homage to Fargo.

In fact, the episode that really sold me on it when I was watching it on Cartoon Network years ago was the surreal dream sequence episode based on The Prisoner, which, again, sounds crazy. But even that was just set-dressing for the overarching conflict that saw Enzo roaming around searching for his way home, a sequence of episodes that somehow managed to figure out how to seem exotic after two seasons' worth of switching genres every 25 minutes.

And at the end, where you find out that Megabyte's been running Mainframe like Bartertown and Bob comes back from the dead as Computer Jesus? It's highly entertaining stuff.

As for the best comic ReBoot, I have to say that Season 3 also delivers pretty well in terms of humor as well, specifically the season finale -- which at the time capped off the entire series. It's a nice little example of tight plotting, too, in that they managed to pull off the conflict the entire series had been building to, bringing almost everything to a satisfying conclusion, and still ended up with an extra five minutes to goof off with.

The result: A musical recap of the entire season:

That sequence is only narrowly edged out by Mass Effect 2 for being the best use of The Pirates of Penzance in a mass-media production created by Canadians.

Inc losing, I don't know if it'd make my top five or anything, but it's definitely something I enjoyed. I just can't figure out why so many people would be asking about it this we--

And now, a few quick ones:

Q: What is your favourite comics series right now? (Non-Big 2, please, but it probably wouldn't be anyway). -- @saoki

A: Right this very minute, the comics I'm loving the most that aren't from Marvel or DC would probably be the consistently amazing Atomic Robo and, believe it or not, IDW's Dungeons & Dragons comic. Image's Screamland is also a safe bet, although I've only read the first issue of the current series (and the extremely underrated mini that preceded it), and Stan Sakai's Usagi Yojimbo has been going for 24 years and has never had a bad issue. It's ridiculous.

If I'm honest, though, the one I'd peg as my current favorite would have to be Mark Waid, Marcos Martin and Paolo Rivera's Daredevil. Those first two issues were as good as anything Waid's written -- and with his career, that's saying something -- and Rivera and Martin are the kind of artists where I look at their pages and wonder why anyone else is even trying right now.

Q: Why do you hate Steel/Commander Steel/Citizen Steel so much? Are you a cyborg racist? -- @graemem

A: How could I be? I have it on very good authority that we're all cyborgs in today's kooky, mixed-up modern world!

Q: Has your love for Batman ever ruined a date? -- @Brevidades

Filed Under: Ask Chris, AskChris, Reboot
Categories: Ask Chris, Humor, Opinion
Comments
Leave A Comment
12 Facts You May Not Have Known About ‘ReBoot’
Ask Chris #207: Rebuilding The Legion Of Super-Heroes
Ask Chris #197: Judge Dredd And The Fashion Of The Future
Ask Chris #196: He Stood Alone At Gjallerbru
Ask Chris #195: Making Connections In Comics History
Ask Chris #193: Let’s Pitch A Wonder Woman Movie
‘Castlevania: Mirror Of Fate’ And Making The Best of A Reboot
Ask Chris #111: Arcade and Why Success Doesn’t Make a Villain Credible
Ask Chris #104: The Most Versatile Villain in Comics