Q: There's lots of Christmas specials in comics. Are there any decent Hallowe'en specials? -- @ilionblaze

A: You'd think that with all the costumes and masks floating around, comics would be way more keen on Halloween. Sure, it's easy to find a solid horror story in Hellboy and there are 70 issues of Tomb of Dracula floating around, but stories that are actually devoted to the day itself are surprisingly hard to come by. There are, however, a few great ones out that that are perfect for getting in that Halloween spirit.The first comics that spring to mind as essential reading for anyone who loves Halloween are the two Hector Plasm one-shots by Benito Cereno and Nate Bellegarde: 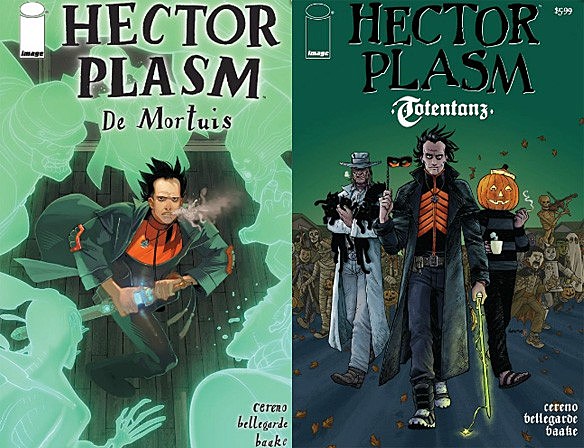 Originally introduced in backup stories in the pages of Invincible, Hector Plasm is a wandering supernatural troubleshooter who deals with unquiet spirits. Like Atomic Robo, it's a comic that invites a comparison to Hellboy, particularly in the way that Cereno draws on folklore and mythology to craft his stories, and builds them around a protagonist who's affable and easy to relate to while still being steeped in the supernatural.

Both of the ones-shots are well worth reading, but the second, Totentanz, is focused directly on the Halloween itself, with Bellegarde drawing an incredible, beautiful version of the Danse Macabre, and a story of Halloween traditions that Cereno identified as the best Hector story, Hop-Tu-Naa: 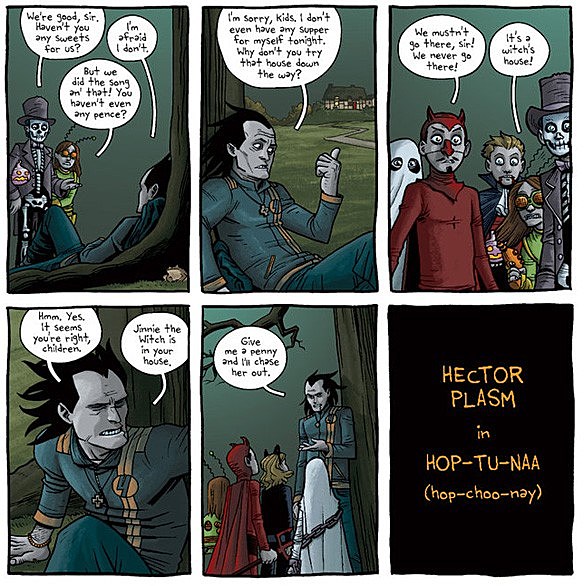 De Mortuis and Totentanz are both available digitally through Comixology. The other Halloween special I'd recommend, though, might require a bit of back issue digging to find, but trust me, it's worth it.

Mostly because it's got the Hulk vs. Frankenstein. 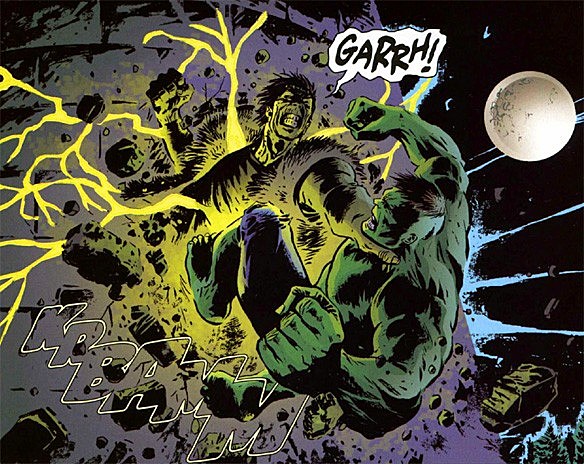 Released in October of 2008, Monster Size Hulk was a Halloween Special that saw Marvel's most prominent monster in an extra-sized throwdown against their more traditionally supernatural characters. Steve Niles and Lucio Parrillo did a story where the Hulk hung out with Werewolf By Night and they bonded in a way that only two dudes who frequently wake up in the woods sporting ripped-up pants in secondary colors can, Paul Tobin told a bedtime story featuring Googam! Son of Goom!, and there's even a prose piece where the Hulk met Dracula by Peter David, with some pretty awesome illustrations by Garbriel Hardman. 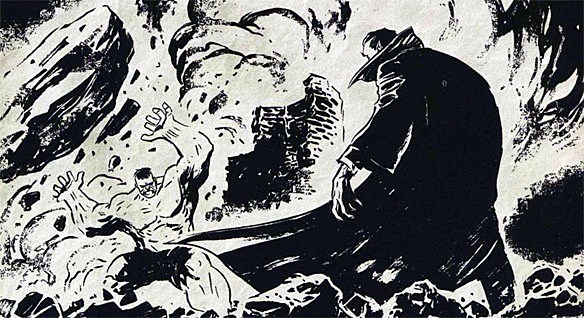 The real star of the show, though, is the lead story by Hardman and Jeff Parker, appropriately titled "It's Alive! ALIVE!!!", exclamation points included.

It kicks off with Bruce Banner on the run from the authorities in France -- because, you know, why not -- when he's suddenly abducted. He wakes up on a train with a sexy lady and her tiny, hunchbacked manservant, and before long, he's on his way to Castle... 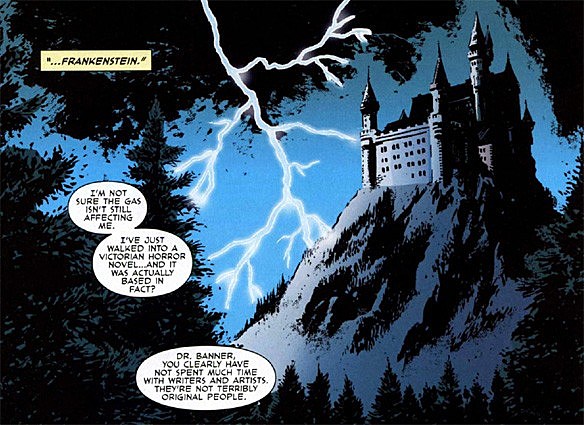 As it turns out, the lady is Victoria, the alchemically preserved 73-year-old daughter of great granddaughter of Victor Frankenstein, who has a slightly used Monster in her basement and needs the help of a briliant scientist to get it back in villager-terrorizing order.

The crazy thing here is not that this woman has a plot to resurrect a monster in her basement, because really, when you grow up saddled with a name like Victoria Frankenstein, that sort of thing is to be expected. The crazy thing is that she decides that the best way to do this would be to kidnap Bruce Banner, a physicist, and get him to help out. I mean, it's also pretty weird that Banner would just shrug and go with it, but I have to imagine that if your life is mostly built around punching out MODOKs and Bi-Beasts, you start to figure out that when Victoria Frankenstein is asking you to science up a monster for her, the next 22 pages of your life are probably going to be pretty awesome.

And as it turns out, they are! After spending some time recreating The OG Frankenstein's work from his notes, Banner is hit by the least surprising heel turn since Sinestro. Victoria and her ersatz Igor (whose name is Fritz) knock Banner out and hook him up to the machine, operating on the premise that anything the fury of nature can do, the Hulk can do better. 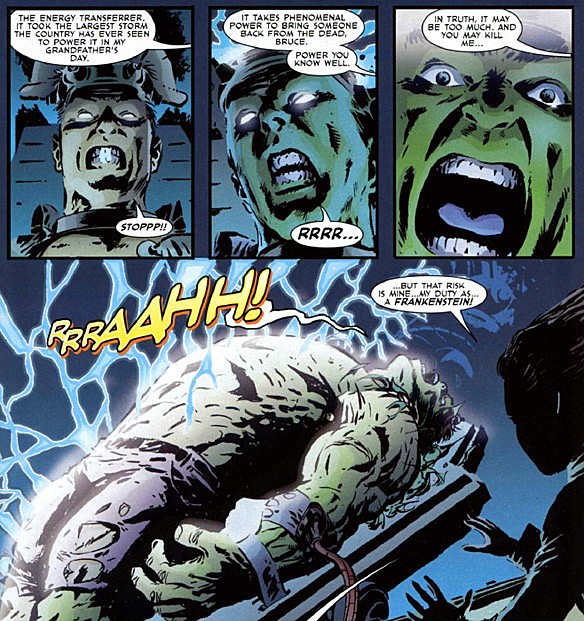 Victoria claims that she actually does think he's a swell guy, but it's the age old story: Boy meets girl. Boy likes girl. Girl uses boy for his scientific knowledge and volatile radioactive blood. Boy turns into the Hulk.

Thus, one Gamma Ray transfusion later, The Monster of Frankenstein and his inexplicable fur vest have risen once again! 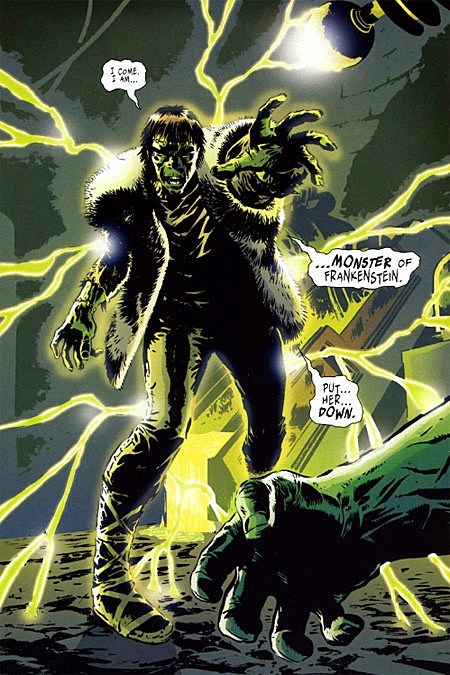 To his credit, Parker somehow manages to avoid using the word "Frankenhulk" anywhere in this entire story, but in a way that you know he was thinking it every step of the way.

Feeling the bitter sting of betrayal, the Hulk and Frankenhulk get in a fight that sees them throwing tractors at each other until the Hulkbusters show up to remind everyone that yes, you're still reading a Marvel comic. They were alerted by Fritz the Hunchback, who wants Victoria all for himself, but as they start blasting at the Hulk, the monster senses a kinship. And again: The phrase "LASER... BAD!" appears nowhere in this comic, but you know they're thinking it.

So, in classic Marvel style, the Hulk and Frankenstein (deal with it) have a team-up. They learn to look past the grotesque exteriors and to the person inside, recognizing what makes them similar, rather than the superficial problems that keep them divided. And then they beat the living crap out of a bunch of dudes in Mandroid armor.

And really, isn't that the true meaning of Halloween?

Q: If Dracula retired, who from comics would be most qualified to replace him? -- @SeanMulkerrin

A: Wait, "retired?" From what? I mean, retirement sort of implies that there's a job involved, but vampirism isn't really something you do vocationally. If he was going to retire, I guess it would be from his career as the ruling noble of his Transylvania neighborhood. If that's the case, there's an obvious answer: Aquaman.

He's got experience as a monarch so that's covered, and while it doesn't have anything to do with blood, he definitely sucks. Hot-cha!

That's all we have for this week, but if you've got a spoooooooky question you'd like to see Chris tackle in a future column, just put it on Twitter with the hashtag #AskChris, or send an email to comicsalliance@gmail.com with [Ask Chris] in the subject line!