Q: What is your favorite dinosaur, and why? -- @RaeBeta

A: I'm not going to lie to you, Rachel: I think about dinosaurs a lot. Like, you know those statistics that run in magazines every now and then about how the average man thinks about sex 900 times a day? Well for me, that figure represents the number of times I think about Batman, Dracula, skateboards, dinosaurs, or some combination thereof.

And now that I actually write that down, it, uh.... it might be revealing a little more about me than I intended. 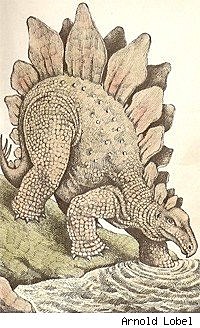 Then again, that's sort of the point of asking about someone's favorite dinosaur. Believe it or not, I think you can learn a lot about a person from the way they answer that question. That's one of the reasons we used it as our standard opener for a while on War Rocket Ajax, because when you get right down to it, anyone worth talking to has given serious thought to dinosaurs at some point in their life.

After all, dinosaurs are awesome. I mean, there's one that basically has a spiked mace for a tail and pointy spines down its back. That sounds like the description of something that's four pages down from the Gelatinous Cube in the Monster Manual,or at the very least capturing princesses in the Mushroom Kingdom. There is nothing about them that seems like they should have actually existed, but they did, which we know now because they continue to exist as terrifying skeletons that people have built entire buildings around, even though they were probably all killed by something from outer space.

And the stegosaurus isn't even the best one, which brings me to my personal favorites. If we're talking about actual real-life dinosaur species, then for me, there's no question whatsoever: Tyrannosaurus Rex. 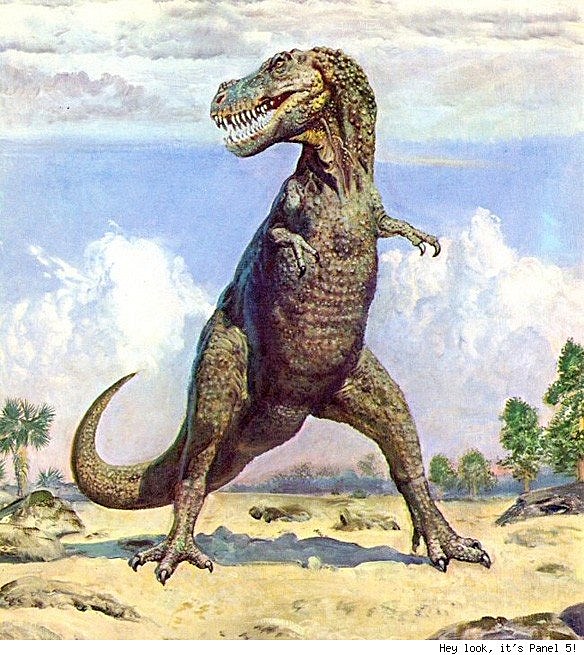 Now, I realize that saying the T-Rex is your favorite dinosaur is the paleontological equivalent that your favorite GI Joe is Snake-Eyes and your favorite X-Man is Wolverine. It's everyone's favorite, and for good reason: There is nothing about the T-Rex that is not just ruthlessly badass, starting with a name that translates to the downright super-villainous "King Tyrant Lizard," all the way down to the fact that they ate other dinosaurs, including each other.

Also, just putting this out there, if you subscribe to the theory that the T-Rex was a scavenger and not a hunter, then you and I will never be friends.

For me, though, the appeal of the T-Rex comes down to exactly two things: Those tiny, tiny arms. I love those, if only because I can imagine a T-Rex holding anything -- like, say, a hot dog -- and it is instantly the funniest thing in the entire world to me. I have no idea what kind of evolutionary process would give a forty-two foot-long dragon monster the most adorable forelimbs that have ever existed, but, well, here we are, with T-Rex and his tiny little arms.

As for which specific thunder lizard is my favorite, that's even easier: Jack Kirby's Devil Dinosaur. 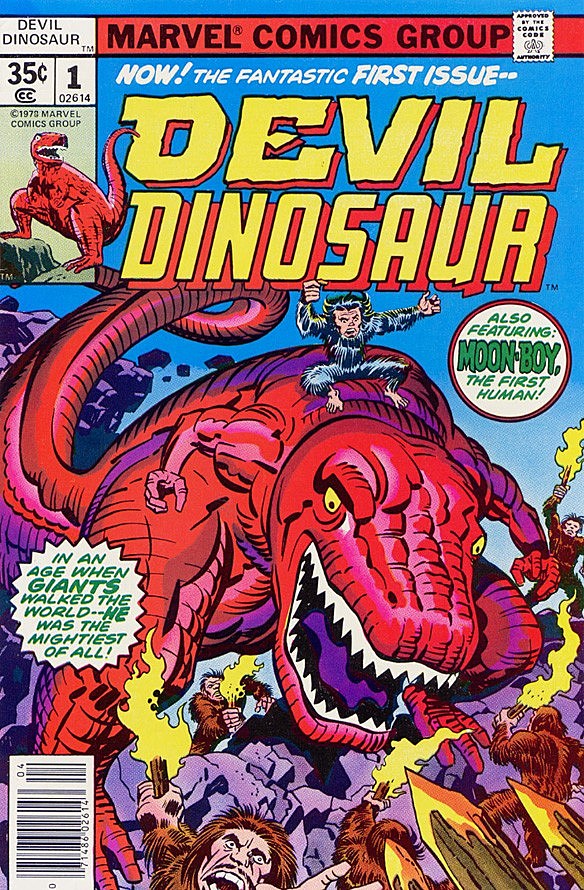 As much as it's often regarded as one of the King's lesser efforts, Devil Dinosaur is probably my third-favorite Kirby comic. Admittedly, "third-favorite" might not sound like much, but we're talking about a dude who was largely responsible comic books as we know them in a career that lasted for half a century.

Originally released in 1978, Devil Dinosaur was the product of a strange period in Kirby's career. This was towards the tail end of his return to Marvel, which was a pretty big deal considering that he'd spent the first few years of that decade in a stint over at the distinguished competition. At DC, Kirby dragged Jimmy Olsen into the Bronze Age and created the entire Fourth World saga in a process that saw him writing and penciling a complete comic book every two weeks, while he was also doing stuff like The Demon, Sandman and my personal favorite, OMAC. But more on that in a second.

The point is, it was an unquestioned renaissance for Kirby, and while his return to Marvel in '75 is often overshadowed and overlooked when compared to what he was building with the Fourth World, it's very much along the same lines. The bombastic adventure of Captain America, the cosmic madness of The Eternals, the sci-fi strangeness of Black Panther, they're all classics.

And then there was Devil Dinosaur. 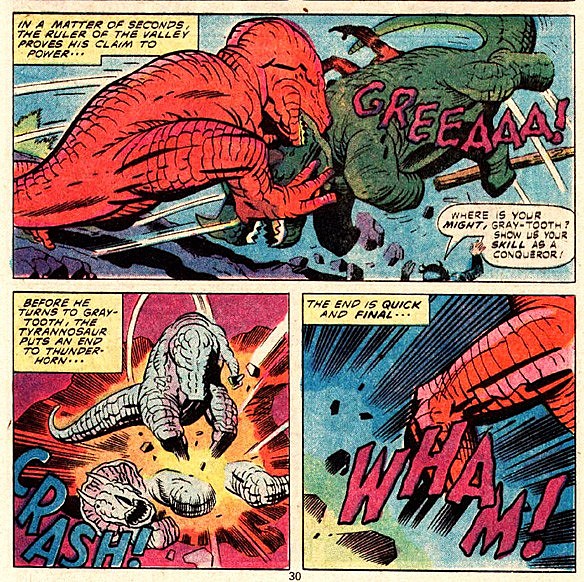 Like OMAC, Devil Dinosaur was a relatively short-lived comic -- the former only lasted 8 issues, and the latter managed to get a ninth in. When you take them together, though, they read like a bookend of Kirby's cosmology, with OMAC set in the distant future of "The World That's Coming" and Devil Dinosaur telling stories of the unknowable past of "The X-Age." But the interesting thing is that as much as they might seem like high concept fantasies -- and as much as they definitely are high concept fantasies -- there's a definite undercurrent of Kirby actually basing his ideas on things that he'd picked up. After all, there's a bit in the text piece in OMAC #1 about how computers "exchanging the time of day" from New York to Chicago that will one day be lead to sharing information instantaneously across vast distances. That part of the World That's Coming actually got here.

With Devil Dinosaur, the key idea was that scientists may think that man and dinosaurs never coexisted, but with the discovery of the Coelacanth alive and well off the coast of South Africa 65 million years after they thought it went extinct, all bets were off. Something that far back in the past was as much of a mystery as the future: 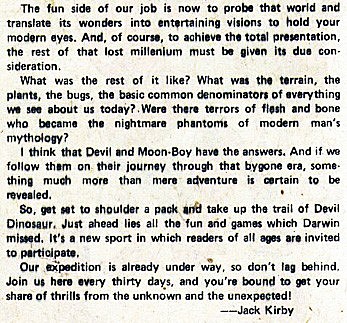 In other words, like OMAC's far-future dystopia, it was the perfect setting for his creations to go on an absolute rampage. Which is exactly what happened in Devil Dinosaur, especially once the aliens showed up to build the Garden of Eden in #4. 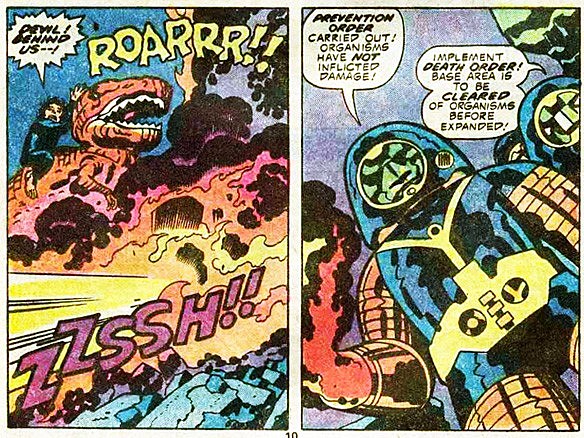 You know, you'd think the fact that the Garden of Eden was a alien construct built around a tree-shaped super-computer that gained sentience when giant ants blew up a spaceship, which was then destroyed by a super-Tyrannosaur and his caveman buddy would come up more often in theological discussions.

That's what's so great about this comic: It is pure distilled "why the hell not" for 20 pages at a time, starring a dinosaur that was born in the fires of a volcano and thus does nothing but beat the living crap out of other dinosaurs, with the occasional caveman, alien or spaceship thrown in for good measure. In short, it was everything great about dinosaurs combined with all the fearless energy that made Kirby comics so great. It's the best of both worlds, and when those worlds are dinosaurs that kick other dinosaurs to death and comics by Jack Kirby, that's downright magical.

Plus, he once fought Godzilla once after Godzilla was shrunk down and sent back in time. '70s Marvel was the best, you guys. The best.