Q: What is the best 150th issue of any title ever? -- @phillyradiogeek

A: Comics will use just about any occasion they can for a special issue, but 150 is a pretty weird number to be excited about. Unless, of course, it's the 150th installment of a weekly Q&A column about comics, in which case you should get very excited and also provide gifts to the writer.

Very expensive gifts. Or cash.Sorry, what I meant to say was that because it's such a kind-of-but-not-really-big-number sort of situation, looking at all of them produces some weird results. There are 150th issues that just cold skip over like it's no big deal, and others that try to make a huge thing out of it, so it ends up being a mixed bag. So in honor of the occasion, let's have a few from some of my favorite series.

To start with, I'm sad to say that Detective Comics, which hit #150 back in 1951, doesn't really measure up. Despite leading off with a story where Batman fights the gun-toting ghost of an executed hitman, it ends up being a slightly more improbable version of a Scooby-Doo plot, where a gang boss is using a cardboard cutout covered in chemicals that are simultaneously invisible and glow in the dark. Even the backup, "Robotman Meets Robotcrook," is nowhere near as good as you want a story with that title to be.

The sesquicentennial issue of Batman, however, features a story where Batman decides he wants to get laid and builds a robot to handle his crime-fighting while he's macking on the ladies. 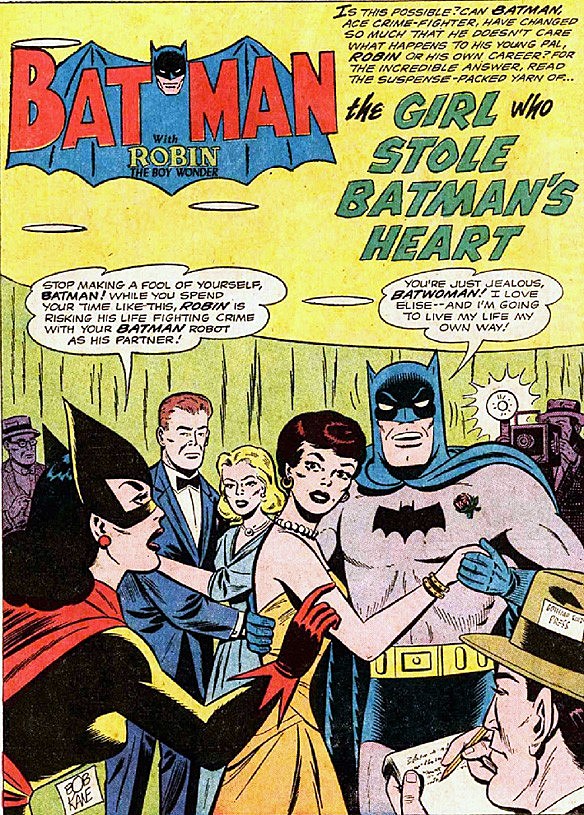 Now we're getting somewhere. Any issue featuring Batman yelling like a teen on Tumblr about wanting to live life his own way! and wearing a rose pinned to his tights is going to be in contention for the best comic ever, regardless of issue number, and that's before you get to the part where he builds a crime-fighting robot to free up his social calendar.

Even beyond that, Jerry Coleman and Sheldon Moldoff give us one of my all-time favorite panels: 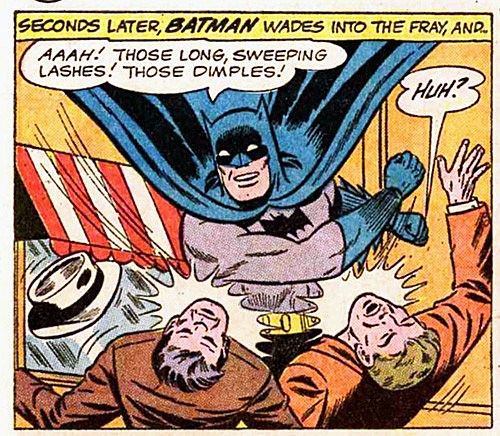 Dude is just so happy, and the guy getting clobbered is weirded out.

But just for the sake of argument, let's see what else comics that hit #150 had to offer. Amazing Spider-Man seems like it would be a pretty good candidate for the best, since it has what are probably the best first 200 issues in the history of superhero comics, and 1975 is right in the sweet spot where the book was at its best. It's even an Archie Goodwin/Gil Kane issue, and that's a pretty solid team.

In practice, though, well... 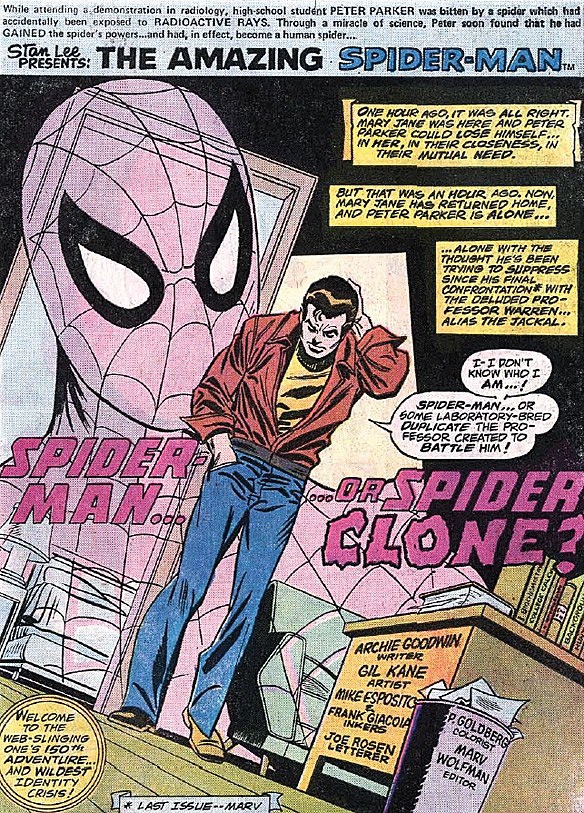 ...we probably could've done without that one.

Adventure Comics -- always a good source of bizarre stories -- hit #150 around the same time that 'Tec did, and while the actual stories are kind of lackluster, the splash pages are basically amazing. First, a bunch of boys in strange hats learn why trying to spank Superboy isn't a great idea: 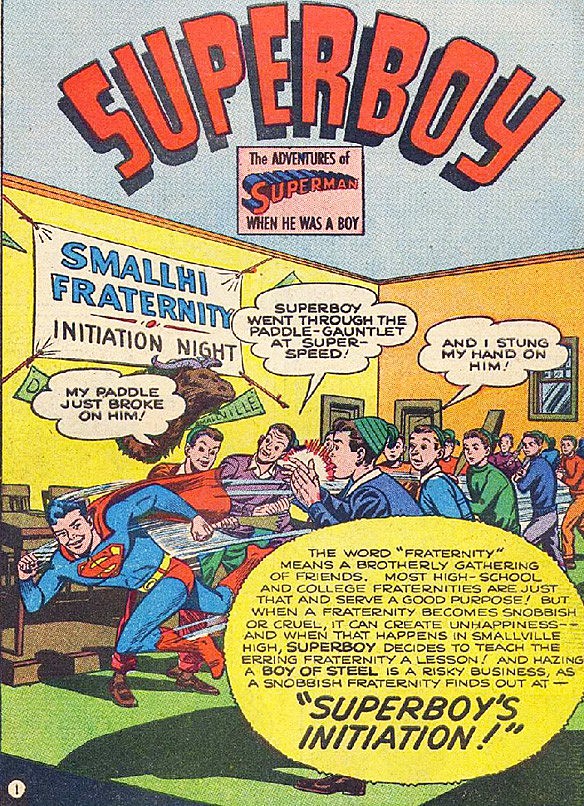 It's essentially a morality play designed to get children to stop spanking new members of their high school fraternities or making them walk on tightropes. Apparently this was a problem in 1950?

Not to be outdone, the Shining Knight spent his splash page in this issue fighting a newspaper that rides a horse, as drawn by Frank Frazetta: 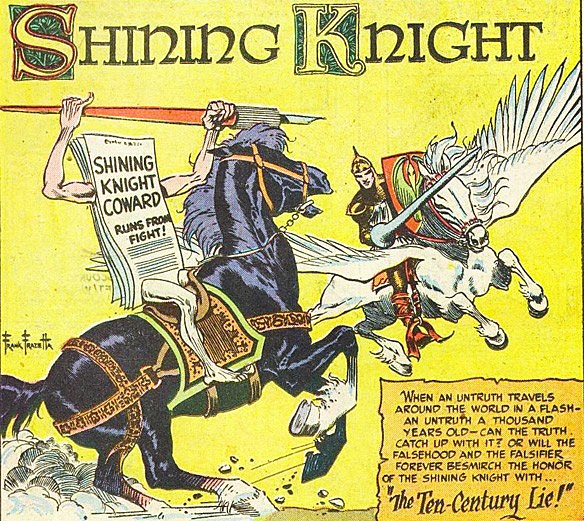 Comics that hit 150 issues are a little more rare as you get to the modern age -- especially in recent years -- but another favorite of mine hit that milestone in 1994: G.I. Joe #150, in which Snake-Eyes fought his way into the Cobra sanctum sanctorum, set Cobra Commander on fire with white phosphorous and beat him to a pulp, all to rescue his dear friend, Storm Shadow.

Which we know because that's exactly how they summed it up in the next issue: 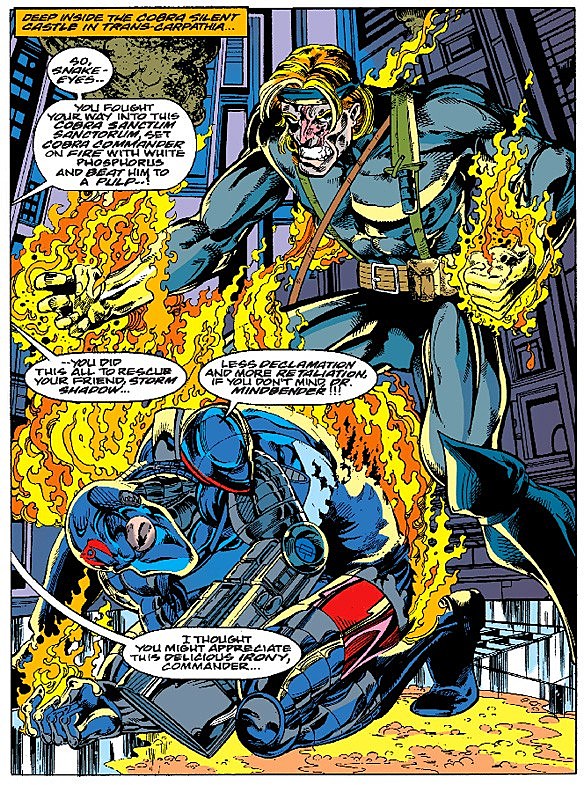 Unfortunately, this is one of those cases where the summary is a little more exciting than the actual event, largely because Snake-Eyes' fists were not actually on fire during the aforementioned beating. The actual issue is a little weird, and while it involves Cobra Commander's anti-ninja holodeck and multiple kicks to the face, there's also a lot of Snake-Eyes hanging out without his mask on so that his blonde mullet can flow free, pointing at his tattoo and silently forcing Scarlett to carry the burden of expository dialogue. Storm Shadow is also turned evil again by the use of a gigantic mind control machine, but really, in a G.I. Joe comic, that's neither good nor bad. It's just something that happens with alarming frequency.

Let's see, what else is there... Uncanny X-Men #150 has one of their more melodramatic battles against Magneto, who is weirded out when he almost kills Kitty Pryde, presumably because she was wearing the goofiest damn costume in X-Men history... Jimmy Olsen #150 is from that weird hit-or-miss Post-Kirby period... Ah! Here we go.

As great as Batman's anti-c**k-blocking robot might be, I think I have found the champion: 1962's Superman #150, featuring a story by Robert Bernstein and Kurt Schaffenberger (the best Superman artist ever, deal with it) in which Lois Lane challenges Lana Lang to a duel to the death... 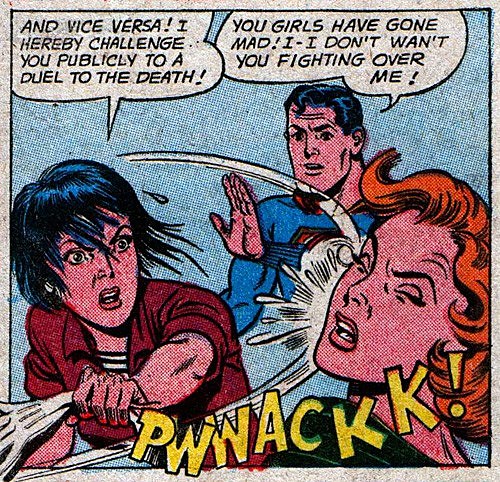 ...and was then shot by Lana Lang, leaving Superman to dispose of her corpse. 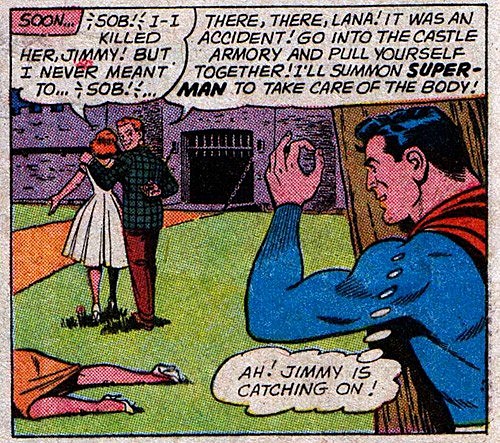 This thing is amazing. As you might expect, this whole bizarre situation was a ruse, but unlike the standard Superman story of the time, it's not one that Superman was pulling to teach his friends a lesson. At least, not at first.

Instead, Lois and Lana are having dinner together and commisserating over the fact that Superman won't commit to a relationship when they hit upon the genius idea of trying to murder each other so that he'll finally pick one of them. Seriously: That is their plan. So they stage an elaborate hoax during Superman's televised appearance at a Tunnel of Love (because that's what Superman did back then), in which Lana pushes Lois into the water and Lois emerges shouting "I've suppressed my murderous impluses! Now I'm going all out for revenge!"

She oversells it just a little bit.

Still, it's a promo worthy of Dusty Rhodes, and combined with a couple of glove-slaps that I can only refer to as "highly erotic," it's enough for Superman to buy the whole thing. So he does what Superman does back then when he's not appearing at theme park ride openings: He stages an elaborate hoax of his own, involving -- what else? -- robot girlfriends! He makes one of Lois and one of Lana, and then, just in case this wasn't every weird Lois Lane story trope cranked up to eleven, he locks the genuine articles up in the nearby castle they're using for their battleground -- sorry, did I not mention that there was an isolated European castle in Metropolis in this story? -- and then tricks each of the women into thinking they accidentally murdered each other.

Please note how super-stoked Jimmy is over this plan.

Under normal circumstances, this would proably be where it ended, but we still have one more twist to go. When Superman lets Lois and Lana out of their impromptu prisons, they each assume that the other was faking to get some advantage in their ongoing feud for Superman's heart, and start going at it with actual battle-axes and longswords. 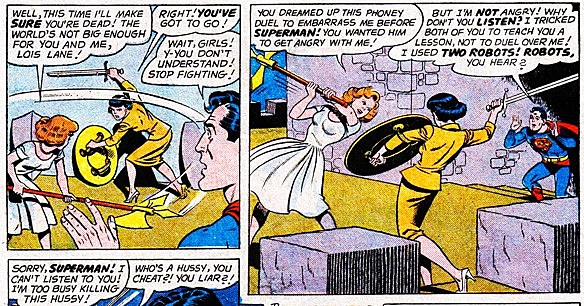 Let's be real with each other for a second: If you tell me that you have read a better piece of dialogue than "Sorry, Superman! I can't listen to you! I'm too busy killing this hussy!" then you are lying through your teeth and are not to be trusted.

The girls end up going over the parapet, but when Superman saves them, it's revealed that these are actually the robots, and the real Lois and Lana were pulling another hoax in order to teach Superman a lesson about trying to teach them a lesson! There are three levels of hoax involved here! This is straight up Inception levels of emotional manipulation! It is amazing.

So that's it: Unquestionably the best 150th issue of all time, definitely worthy of the kind of celebration that requires very expensive gifts.