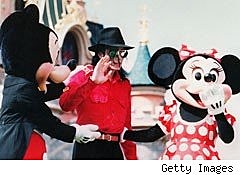 At one time Michael Jackson wanted to buy Marvel comics, but now that he's out of the picture a much bigger rat has moved in. Well, maybe that's more of a mouse than a rat. Disney, home of Mickey, is going to buy Marvel, home of Spider-Man, Thor, Fantastic Four and Thor.

According to Arvind Bhatia, an analyst at Sterne, Agee and Leach, the deal looks like be a "win-win" for both companies. Since we don't own any Marvel stock, we're going to refrain from commenting on the share offer price, which has been quoted as $30 plus a small amount of Disney stock and also $50 per share.

Of course, how Mickey's tight fist of control will wrestle with Spider-Man's web remains to be seen. Could this mean more musicals a la "Spider-Man"? After all, Disney has done well on the big white way. Then again, Marvel's Bromance series might include Donald Duck getting cozy with the Hulk, that could get a little weird.