This week's episode starts off with the iconic image of Bennet dead with Claire and the mystery man (who I'm still speculating is West). Bennet and Mrs. Bennet are speculating about whether Claire is dating someone new. Again the subject of trusting outsiders comes up, and Bennet expresses an intrest to meet him. Claire lies, 'There is no boy.'
Cut to NYC, where Mohinder and Matt are busy being good daddies, trying to soothe Molly out of her screaming nightmares. Molly's not very happy and I'm sure her displeasure grows upon him singing to her. Nice voice buddy.

Nathan goes to see his kids at school to tell them that his Mother is in the hospital and that she'd appreciate it if they'd call. Through the gate he delivers the news, a derelict dad. An official from the school asks him if she can help, and when he informs her that he's their father, she informs him that he's not allowed to be on school grounds. He introduces that gold digging woman to the man who ultimately heals her and this is the thanks he gets? Seriously?

Maya and Alejandro are with Derek, the American who reveals that he's from New Jersey, but picked up a (Claire's?) car in California. It's revealed that they're all going to be looked for at the border. Who do they almost run over? Our favorite bad boy, Sylar.

We get a brief look into Micah's homelife at the present, hanging out with his cousins and his grandmother. While his cousin wants to watch pay-per-view, both his grandma and his cousin won't give him the money, but Micah's sweet ability to manipulate electronics might earn him some favor.

Matt Parkman is in Angela Petrelli's hospital room where she confesses to Kaito Nakamura's murder. She even goes so far to say that her wounds were self-inflicted. She conveys to Matt that she must lie to protect all of them. He's having none of that.

West and Claire meet at school, where Claire tells him that they should no longer see each other, because her parents are so overprotective. He promises that he'll back off tomorrow if she lets him take her out today. She agrees.

Nathan comes to the hospital to see his mother, where Matt tells Nathan he knows that his mother did not kill Kaito Nakamura, the same way he knows that Nathan can fly. Because he can read minds. Woo -- revelations!

Sylar, Maya, Alejandro and Derek are all in the car talking about destinations. Sylar says that he and Dr. Suresh are old friends and he'll take them to meet him. Maya thinks that it's a sign from god and when Sylar tells her his name, Gabriel Gray, that solidifies it for her. Alejandro remains suspicious.

We reconnect with Monica, Micah's cousin, who's completely psyched about getting a management position but her manager doesn't think she's right for it. Pretty much the only intresting thing in this scene is that she can replicate a flower tomato at the burger assembly line that she saw on TV that morning. What's her power, food art? 'Cause that's pretty cool.Claire announces in her normally obscure and badly lying kind of way that she has to go to the library for a research project about libraries. What? Instead she runs to the end of the street, sans books (not obvious at all), Bennet in pursuit, only to be whisked up into the air by West just before Bennet can see them.

Nathan and Matt are throwing out theories on who could be the killer, when a picture comes up that interests both of them. Angela Petrelli, Mr. Petrelli, Linderman, Charles Deveaux, Kaito Nakamura the dude with the glasses (named Bob), a woman who Matt recognizes and ... duh duh duh, Matt's father. Four people are unaccounted for. I wonder who's parents they are...

Monica knows there's something inside her that needs to come out. Her food artistry skill? But the show strikes a chord of realism when it's revealed that she lost her mother in Hurricane Katrina.

West and Claire go on an official date. To the top of the Hollywood sign and beyond! She tries to open up and West tells her to jump. He explains that he can't help her if she doesn't trust him. So let's get romantic! She plummets off of the Hollywood sign, and he catches her. Best line? 'I know you can heal Claire but I never want to see you hurt.' Too. Much. Romance? Here's the major question: did the plot line change once Hayden turned 18 and became a legitimate sex symbol? Are they just systematically working up her relationship with West to get some skin scenes in the show? I don't know about the average reader, but 'Heroes' doesn't need any hot cheerleader ass to be excellent programming. Just throwing it out there.

Micah's using his crazy skill to get the pay-per-view fight. And Monica's perplexed and disappointed. She gives him the I know it's tough, but you got to obey the rules speech. Wait -- did Micah just feel what was going on in Monica? AND -- can Monica just do everything she sees? If so, that could be a really useful power and an excuse for TV to be not only a learning tool, but a life-enhancer.

Matt asks Molly to help him find his dad, since he seems to be in the middle of Matt's case. Upon gazing on his picture, Molly realizes that Matt's father is, in fact, the Nightmare man. Then her eyes go all crazy and show the godsend sign. Um, ok. That's a pretty cool power too. Being able to change your eyes? Can you imagine how that would intimidate? Don't mess with me, I'm crazy -- and then turn your eyes to concentric circles!

Nathan Petrelli is beginning to annoy me. He's in some kind of demented self-pity place hallucination state. Every time he seems to think of Peter, he sees himself in the mirror burned. Strange: Explain it already, don't make my mind work on a puzzle so small as Nathan Petrelli.

Maya, Alejandro, Sylar and Derek are at a rest stop. Derek has figured out that the pair are murderers and informs Sylar as much. Sylar kills Derek with a brick, pretends to sympathize with Alejandro and Maya's powers and scoots off in Claire's stolen car. Hmm, wondering what his motivation could be? I say it's purely humanitarian. I mean, wandering around in South America probably helped him more clearly redefine his priorities, right? 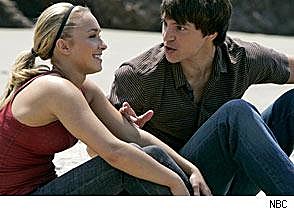 Claire and West decide after their date that there needs to be a better lie she can tell. She decides that cheerleading is the best option, and Bennet grudgingly allows her to. Right after that, the Haitian comes, telling Bennet that there's a lead on the pictures in the Ukraine. Bennet's getting dragged into another mass of lies, right behind his daughter.

Mohinder and Matt are arguing about whether or not Molly can find Matt's father. Matt insists that it needs to be done. Molly says she'll do it for him. But when she does, she goes into a coma. Matt gets to do some super emotional acting. And the tears just come -- not from Matt, but from us. Because lord knows I've so grown attached to that annoying little person-finding kid. She's like Shirley Temple with super powers.

Proving our earlier musings about Monica's power, it appears that she, in fact, can do whatever she sees on TV, kicking the crap out of a would-be burger store robber. Again, let me reiterate. This power kicks complete ass. Let it be known.

While there were some really cool parts this epi
sode -- it was neat to meet the new hero, Monica, and I'm excited to see where her power takes her -- for the most part, it was same old, same old. Nothing really revolutionary, except that we recieved confirmation that basically all of the original heroes were the parents of the current generation of heroes -- though we kind of already knew that. It was interesting to find out that Matt's father is the nightmare man. He must have crazy psychic powers akin to those manifested by the Phoenix, aka, Jean Grey. Either way, the season won't be complete until the Nightmare man explodes someone's head by just thinking it. (While Tenacious D blares in the background... digression!) Despite the relatively slow paced episodic package this time round, I'm still dying to see what happens next week. And, as embarrassing as this is to admit, I'm starting to like the West/Claire dynamic. It's cute. Well, at least until they kill Claire's dad. (Purely speculation, of course!) Until next week 'Heroes' fans! Hopefully we won't spend the next hour pining over Molly's distastefully cute comatose body.

Filed Under: heroestvsquad
Categories: News
Comments
Leave A Comment
Back To Top