The first episode of the second season starts off strong, growing to a fever point and ending in a way we can't describe as anything less than absolutely nuts. With quick touch-and-go reintroductions into the lives of our favorite heroes, we get a glimpse of what's been happening over the last 4 months.

While he's in no way our favorite character, Mohinder Suresh starts off the new season well by giving a highly detailed lecture to a smattering of academic types on the evolution of ordinary people with extraordinary powers. A disease is preying on our heroes, those folks with that extra special something. Apparently, if no one does anything to stop the disease, it will eventually halt the rightful evolution of man.

Enter Claire and Bennet trying to start a new life with a new name. Claire's the same as she was last season, nothing seems to have jaded America's favorite perky cheerleader. While discussing best ways to stay underground and unnoticed, she throws out a highly teenage comment, "Wouldn't less attention be drawn to me if I had my own car?." Kids today! So priceless. Claire's personal trial to 'skate by unnoticed,' ends up being a lot harder for her as well as Bennet himself than they had anticipated. Not to mention Claire meets a new friend at her high school named West. 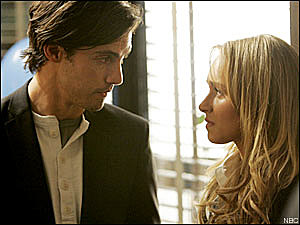 We find Hiro where we left him at the end of last season -- in feudal Japan -- coming face to face with his personal hero, Takezo Kensei. Things don't exactly turn out the way he expects once Kensei is unmasked. Hiro's mentor turns out to be nothing more than a drunk Englishman, not interested in heroism at all. Hiro is determined again to save the day and help Takezo Kensei live up to his legendary status. At this point, since Kensei is such an ambivalent drunkard, we're thinking Hiro's going to have to step up to the plate and take his place becoming a legend in his own right. Go Hiro!

Our favorite cop, Matt appears to have fully recovered from his gunshot wounds to the chest. Going out for detective, he uses his amazing powers of mind-reading to excel beyond his Chief's wildest dreams. Matt's cheating wife is now out of the picture, and Molly, the girl who can find anyone if she thinks hard enough, is now in his and Mohinder's ward. In a scene reminiscent from 'The Ring,' Molly's teacher informs Matt of some very interesting drawings that are stemming from the child's nighmares ... In yet another take off from a famous film, the words 'I can see you!" are heard during Molly's nighmare. We get it, it's the eye of Sauran from 'The Lord of the Rings,' he's watching all of the heroes. Gotcha. Regardless of what movie it was pulled from, it's fairly obvious that the Heroes have something else they need to worry about ... a new nemesis if you will, even worse than Sylar.

Nathan has officially lost his marbles as well as his family, and political career. The former politician and all-around bad guy, Nathan Petrelli is now a bearded alcoholic completely stuck on the idea that Peter, presumably dead, is still coming back and Nathan's still racked with guilt at his brother's death.

New Heroes also abound! We meet Alejandro and Maya, who are heading from Mexico to the US border. While it's not clear if Alejandro has powers, it seems that Maya is able to kill people en masse with her mind, something that she doesn't mean or like to do. We also meet the man who recruits Mohinder to a new kind of evolved people tracking facility. While we don't catch the guy's name, we do know that his power is to turn any metals into gold. That seems useful -- sign us up! Claire's new friend West also has a few secrets of his own ... let's just say, there might be a new flying man this season round.

To further the wild conspiracies surrounding the show, death threats are mysteriously arriving to original Heroes, Angela Petrelli and Kaito Nakamura, that show pictures of the two with the mysterious sign on Kensei's sword painted in red over their faces. Who's behind these planned assassinations? It can't be Sylar, that would be too obvious, and from Kaito's brief chat with the masked assassin, it's someone they never expected. But WHO?

As if death threats aren't strange enough, we're also treated to a strange glimpse in the mirror from Nathan Petrelli. Is that Peter's burned face that Nathan's seeing in his reflection? Will his brother be forever inside of him? Or is it just his own guilt burning away inside of Nathan that's making him see Peter's face there?

The last two minutes of this episode of 'Heroes' is so monumental and mindblowing I won't even transcribe it here, watch it online if you haven't seen it yet or check out this review that gives a little more! Needless to say, much like the first season of 'Heroes' we're left with more questions than the last and a healthy appetite for more. We can't wait for next week. Until then, 'Heroes' fans.