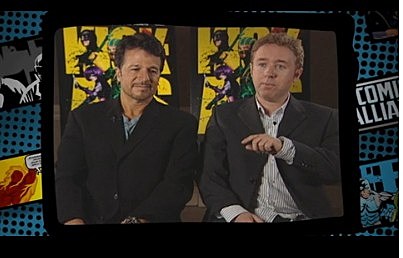 With the release of "Kick-Ass" the movie coming up fast on Friday, we've got a short video interview with writer Mark Millar and artist John Romita Jr. talking about the hurdles the film faced and their excitement about seeing the comic realized on the big screen.

And of course, no Mark Millar interview would be complete without his trademark bombast, which always makes for such amazing, amazing quotes: "As soon as it started, it was instantly my favorite film ever. I feel as if 'The Godfather' looks [like] rubbish now... It's the best movie ever made... Plus, I feel as if America has had a hard time over the last two or three years. And I think this is the moment it all turns around for America. I think this is the turning point, this film."

Check it out after the jump!