"Kick-Ass" had a New York City showing this week at a special screening by UGO for journalists, bloggers, industry folk, and a select few fans. Writer Mark Millar and artist John Romita Jr. were on hand for the screening, and took questions from fans and host Jordan Hoffman afterwards. ComicsAlliance was there as well to bring you a recap of the Q&A with Millar and Romita. 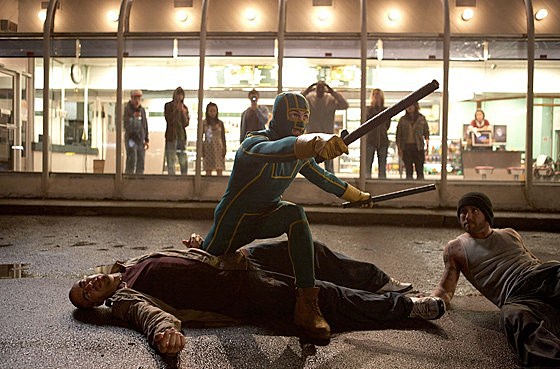 Romita kicked things off by telling the audience that his favorite moment in the film is the opening scene where the wannabe costumed hero plunges to his death, as it is a direct adaptation of the first panel of the comic. "So it's all downhill for you after the first scene?" Hoffman asked. Millar said he was partial to the final fight scene between Hit-Girl (Chloe Moretz) and mobster Frank D'Amico (Mark Strong), and recalls saying to Strong on set that the respected Shakespearian actor is "going to be remembered for kicking the s--t out of a ten-year-old girl." Romita added that he really likes Kick-Ass and Hit-Girl face-off against the drug dealers in the flophouse, as it is also transferred verbatim from the comic. (Clearly Romita wanted Zack Snyder to direct.) Hoffman added that the scene is loyal to the comic, "minus one decapitation."

Hoffman plugged the new "Kick-Ass" hardcover ("It comes with a guarantee to make your penis slightly longer," Millar quipped) and asked about the differences between the comic and what ended up onscreen. Millar brought up the film's new ending, where Kick-Ass uses a jetpack to save Hit-Girl (told 'ya there would be spoilers!) instead of the elevator scene from the comic. At first Millar says he balked at such an over-the-top ending, but director Matthew Vaughn insisted on shooting the scene and seeing how it worked in the final cut. Millar acknowledged that, after watching the film with an audience, that scene gets the biggest cheer: "It's the Luke Skywalker coming to blow up the Death Star moment." Romita acknowledged that the elevator scene wouldn't have been cinematic enough, and while we agree, it's a big leap from a tense elevator scene to your lead character flying around with a cheap-looking jetpack. 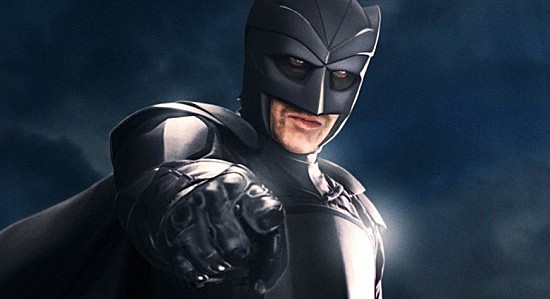 Next the group discussed the origin story of Big Daddy (Nicolas Cage) and Hit-Girl, which is depicted through an animated sequence in the movie. Romita, inker Tom Palmer, and colorist Dean White created original artwork for the 90-second sequence, which Matthew Vaughn viewed as an homage to the comic. Vaughn gave Romita carte blanche to create art for the 2D/3D animated sequence, which took nearly two years to complete. (And ends up kind of looking like a motion comic.) Romita also created artwork of the various thugs and mobsters that Big Daddy draws in the film.

Millar discussed the autobiographical nature of the comic and movie ("[Dave] is the George Costanza to my Larry David"), and told a story about the time his friends suggested that he lie to his girlfriend about being gay in order to get out of the relationship. (Turns out there are some realistic moments in "Kick-Ass.") Millar also related Big Daddy and Hit-Girl to his own relationship with his daughter. ("We do tomboy sort of things together, but without the semi-automatic weapons.") 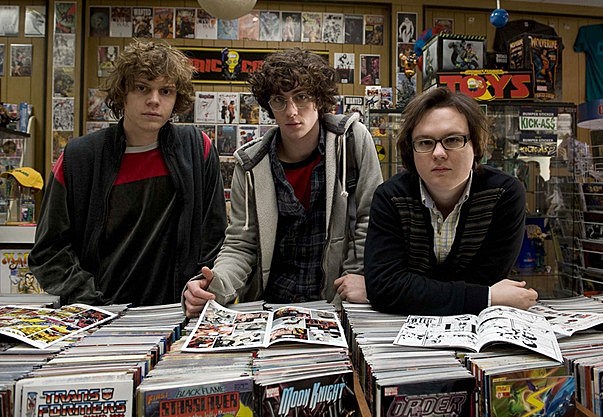 A fan asked a question about Nic Cage's involvement and the casting process, and Millar joked that he had originally written the Dave Lizewski part for Zac Efron, on the theory that any guy would pay $10 bucks to "see the s--t get kicked out of him." Matthew McConaughey and Mark Wahlberg were both in the running for Big Daddy, while Robert DeNiro was up for both Big Daddy and Frank D'Amico, as he had worked with Matthew Vaughn on "Stardust." (He plays a cross-dressing pirate. Seriously. Netflix it.) Romita wanted Walhberg for Big Daddy ("Say hi to your mother for me, Hit-Girl. Oh, wait, you can't. She's dead.") but was happy with Cage's casting since the actor is a big comic book fan. Millar said the Hit-Girl auditions were a "moment of existential terror" because the child actors were required to use the "c word." Romita and Millar revealed that a young stunt child stood in for Moretz in several scenes, as did a horse jockey and a "little person martial artist."

Talk moved on to the comic, with Millar saying September for the start of the next volume, but Romita asking fans to give him until Christmas. Millar confirmed that besides the return of the Red Mist, the new series will see a new villain named -- wait for it -- "The Motherf$!ker." Romita added that the title will likely be "Balls to the Wall." (So get ready for German metal band Accept to come out of the woodwork and sue for copyright infringement.) 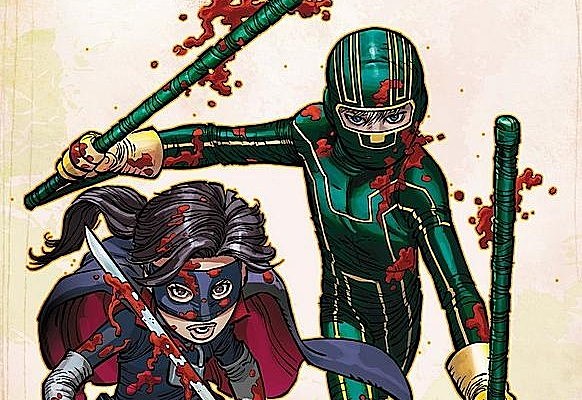 The pair then discussed the difficult process of getting the film made. Romita said every studio turned Matthew Vaughn down, so he turned around and financed it himself. Millar felt that the production team had "the 'Pulp Fiction' of superhero screenplays... a game-changer" but that everyone in Hollywood hated it. Studios insisted on taking out Hit-Girl, or making her 25, and cutting the dirty language in order to get a PG-rating. At this point Vaughn decided to raise the $40 million budget himself, throwing a fundraising party with his rich friends and tossing in $5 million of his own dough. So the lesson here, kids, is marry a millionaire supermodel with wealthy pals and someday you might be able to direct a modestly-budgeted teen superhero comedy.

Millar called Vaughn "ballsy" for making the movie and then selling it back to a studio for a huge chunk of change. He thinks the movie works because, like "Pulp Fiction," "when it's funny it's really funny, and when it's scary it's really scary." Millar says this is what he went for with the comic, and Vaughn got it right away. Hoffman plugged the "Kick-Ass" making-of book, which talks about the production of both the comic and the movie.

Romita credited (or blamed, depending on your interpretation) Vaughn with the decision to let Kick-Ass/Dave get the girl in the movie. Millar acknowledged that Katie getting her boyfriend to beat Dave up for lying about being gay is more realistic, but that "when someone pays $10 bucks, they want to see people having sex." (As Chris Murphy said in his review of the film, where is Millar seeing movies that it only costs him $10 bucks?) Romita added that the twist in the comic where Big Daddy was actually just a fanboy like Dave, and not a former cop, was dropped because Vaughn felt it would knock the movie's momentum off.

Millar plans to add the cop character from the film who adopts Mindy/Hit-Girl at the end into the next comic series as a way of acknowledging the movie's storyline. "It will be subtle, the differences, and it won't affect the flow of the story." Millar has had the story for the trilogy in mind for some time, and is working with Vaughn to make it coincide with potential future sequels. Romita added, "We have to hurry up [with the sequels], because Chloe is growing as we speak." 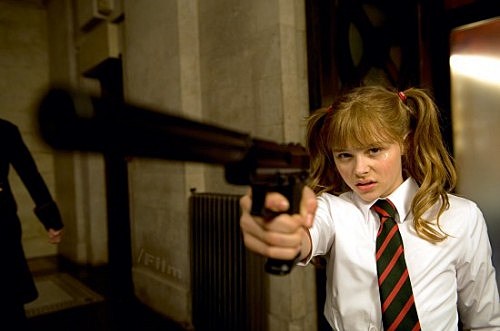 Romita discussed the phenomenon of real-life superhero vigilantes, at which point things got weird. A fan dressed in some sort of colorful motorcycle outfit stood up and discussed how the members of his organization fight drug dealers and street crime in costume. The fan noticed a lot of parallels between his real-life costumed vigilante organization and Kick-Ass, such as both of them having a MySpace page. (So, basically, he's stuck in 2006, just like Millar.) Millar mentioned designing his own superhero costume with friends growing up, and that one friend's costume just ended up being a Batman outfit. (Because why mess with perfection?)

Finally, Millar addressed the question of whether he writes comics with movie deals in mind. "If I wanted to write [Kick-Ass] for a movie, I would have played it safe. I just write the kind of comics I want to read. On paper, 'Kick-Ass' doesn't seem like the sort of thing that would be made into a movie. But now it's being called a game-changer, and everyone wants to get on board with this sort of thing. I just think if you try to chase the dollar, if you try and write a comic as a movie, it's never going to work. Just write what you want to write. I see the movie as a $100 million dollar ad for my book."

Who is this Millarbot with a thick Scottish brogue, and what has he done with Mark Millar?