Every once in a while, something comes along that's such an incredible train wreck on every level that it seems like the entire Internet grinds to a halt while we all try to comprehend that it actually exists. Today, that time has come once again, thanks to Marvel Brothel. 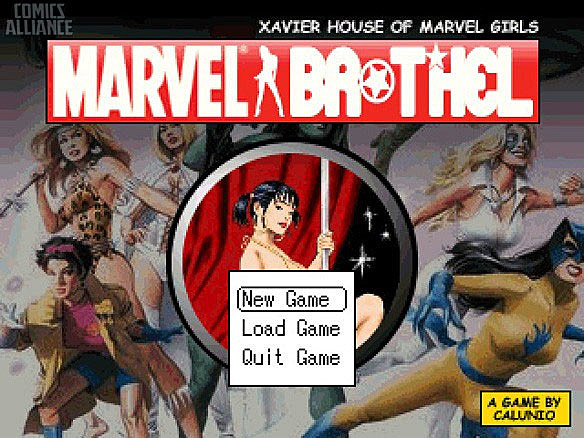 What it does provide, however, is complete and utter insanity, starting with what has got to be the single greatest opening sequence in video game history:
A fan-made project built using the RPG Maker 2003 engine, Marvel Brothel is pretty much exactly what it sounds like: a video game where Professor X decides that the best way to further humanity's acceptance of mutants would be by literally pimping out the heroines of the Marvel Universe to a never-ending stream of johns.

Unfortunately for the curious masses, it looks like Marvel Brothel is no longer available for download, as it was removed from RPGMaker.net for what I'm pretty sure are incredibly obvious reasons, but not before ComicsAlliance snagged a copy so that I could subject myself to it for your amusement.Right from the start, I can tell you with no uncertainty that this is not a very good game. To be perfectly fair, the graphics actually are pretty neat, with each character done up in 16-bit Final Fantasy style sprites but everything else is a complete drag, and while it might seem crazy to rip on a game for not making even the barest attempt at eroticism, but really: One goes into something called Marvel Brothel with a certain level of expectation.

This is the entire premise of the game, that Professor X has turned to pimping not for financial gain, but as the next evolution in the process of mutants gaining acceptance. After all, if all humanity sees is mutants fighting, then they're never going to really be able to let go of their fear of mutants.

You know, I've got to hand it to "Calunio" here; as far as fan-fiction plots go, that almost -- almost -- makes sense. Plus, it allows for a truly amazing turn of phrase as Professor X justifies his new venture: 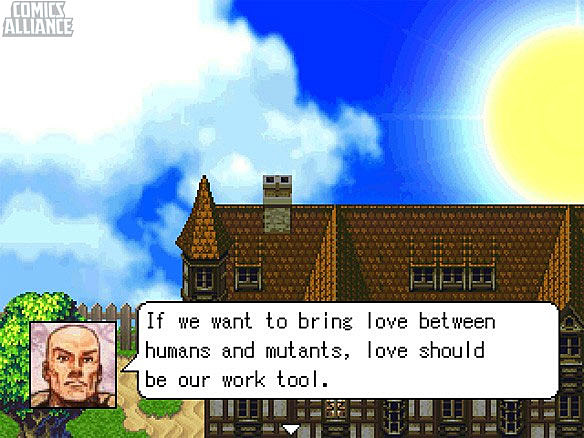 I think we can go ahead and shut the English language down now, because we are never going to be able to top "love should be our work tool."

Once the premise -- rickety as it may be -- has been established, Gambit shows up to give you the rundown on just how to go about running The Best Little Whorehouse In Genosha:

This, I think, is the best choice in the entire game. Everyone else in the game is hilariously out of character, but Gambit? That guy fits right in as the consigliere of a super-powered bordello.

Plus, he's full of great tips like this one:

Not exactly a surprise there, champ.

You're then invited to take a tour of your new facilities, which start out pretty bare-bones, although it's worth noting that Professor X did have enough foresight to stock the room where the ladies entertain clients with a few condoms on the dresser: 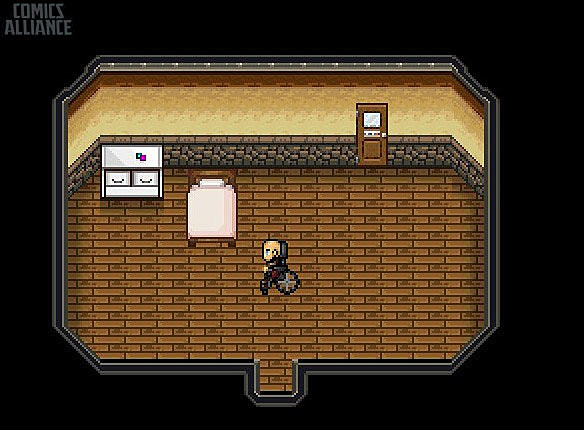 Also, you can go into Cerebro and dial up Forge for yet another truly amazing bit of dialogue: 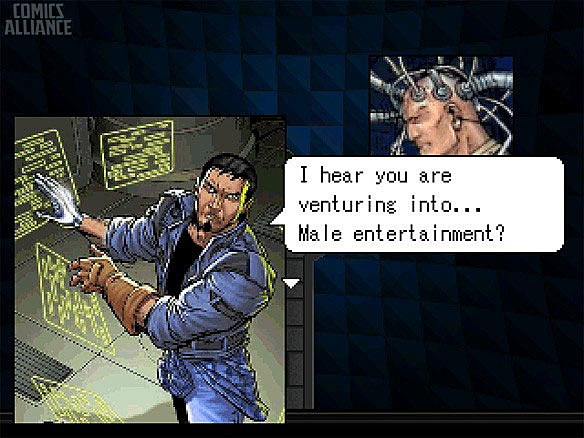 True to his character in the comics, Forge's role in Marvel Brothel is to outfit the X-Men with equipment and technology, although in this case, the tech is less "cybernetic leg" and more "sexy mood lighting."

You can take the money you earn -- well, that you collect, Professor X isn't exactly doing the earning -- and buy upgrades for the brothel. He stocks about what you'd expect, like sex toys... 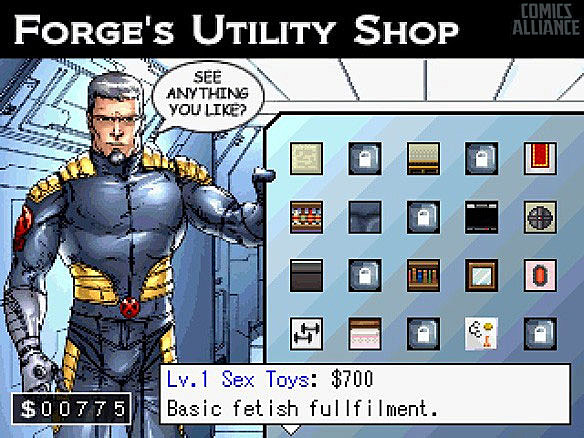 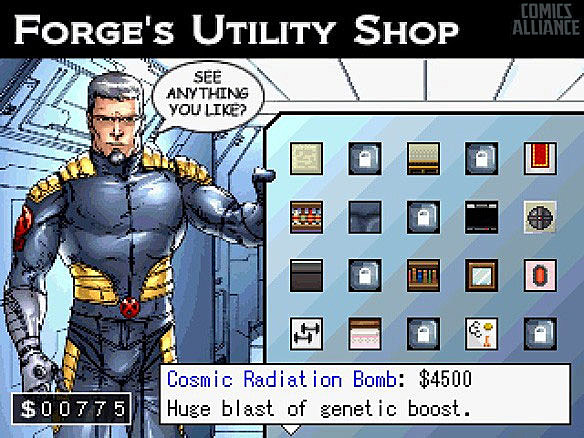 After that, it's time to actually start the game, and for something that oughta be combining the excitement of the X-Men and the thrills of Dolemite, the end result is both buggy as hell and extremely monotonous. It's all about matching up the stats of each girl to the stats of the customers, which basically involves rolling from one side of the screen to the other for five minutes at a time. In other words, Big Daddy Kane was wrong: Pimpin' is easy. It's just not very fun.

At the start, your roster of ladies is limited to Rogue, Storm and -- just to creep things up a little more than they already are -- Jubilee, complete with her early '90s yellow trenchcoat and Bret "The Hitman" Hart sunglasses. This presents a bit of a problem -- moreso than the game itself already does, I mean -- as a good third of your stable is completely unable to go about her duties: 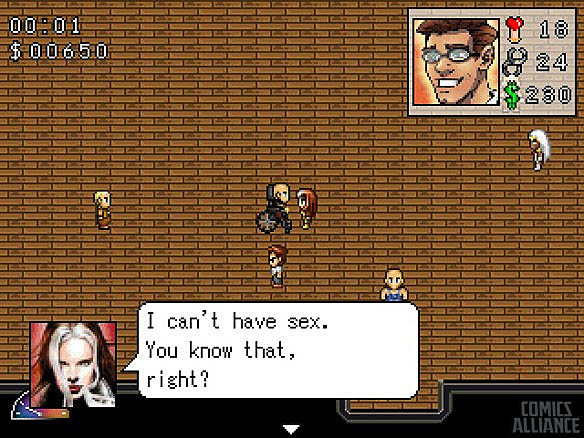 You'd think this would make Rogue functionally useless in the game, and you'd pretty much be right, except that eventually, bad guys start showing up and someone has to step up and fight them. And by "fight," I mean "bump into while hitting Enter."

Eventually, you get a few other options:

Yes, you recruit new superheroines of the night by purchasing them from Mojo. Because pimping out Jubilee in the name of Mutant Rights just wasn't quite sketchy enough.

I will say, though, the expanded roster available from Mojo has some surprising depth to it that's not limited to the X-Men. The Wasp, Elektra, Songbird from the Thunderbolts, She-Hulk, Black Widow, the choices are from all over the Marvel Universe, with each one coming with her own special ability and characteristics that appeal to different clients. I'm even pretty sure I saw Mary Jane Watson in there somewhere, and that makes even less sense than everything else in this game.

Really, though, the game is all about resource management and the extremely repetitive process of playing matchmaker to a neverending stream of johns. They show up constantly, which makes it a lot like Root Beer Tapper, except that the only thing they're interested in tapping is that ass.

Occasionally, the monotony is broken up by a customer who comes in with a particular fetish to be filled, which often involve attributes that you'd probably only know if you were familiar with the comics. Usually these are pretty mundane, but occasionally... 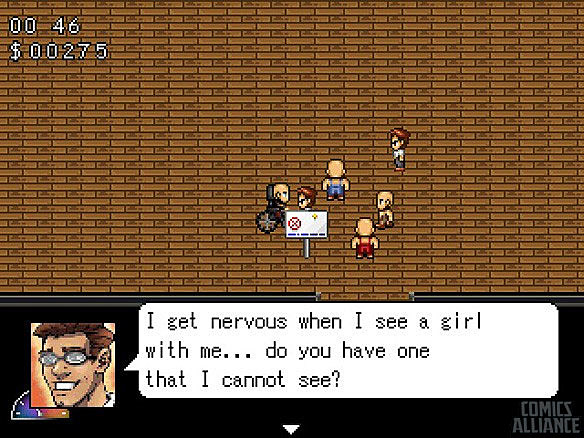 ...they get alarmingly specific.

The only other thing that breaks the monotony are the events that occur between levels, in which other Marvel characters show up to move the plot along, like the Kingpin... 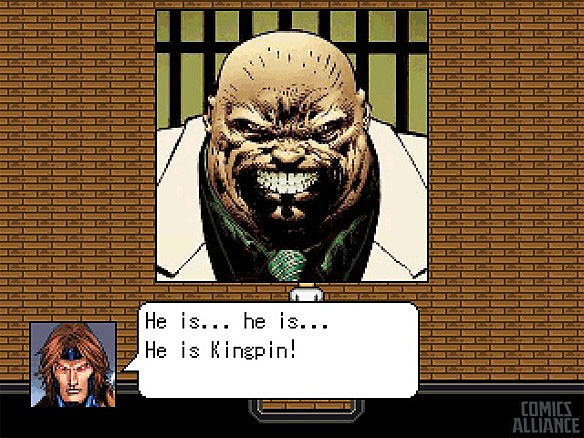 ...who rates your brothel and upgrades your clientele based on how well you decorate. Again, that's a pretty good fit for the character. After all, I'm almost positive I saw him rating interior design at least once during the Ann Nocenti run on Daredevil.

I only played the game for a couple of hours -- that being the maximum amount of time I could handle the thrill-a-minute excitement of trying to decide if I should spend my money to recruit the Wasp into a life of sin or add a couch to the break room -- so I never got to see any of the scenes involving the Hulk, Spider-Man, Wolverine or Mister Sinister, all of whom show up in screenshots: 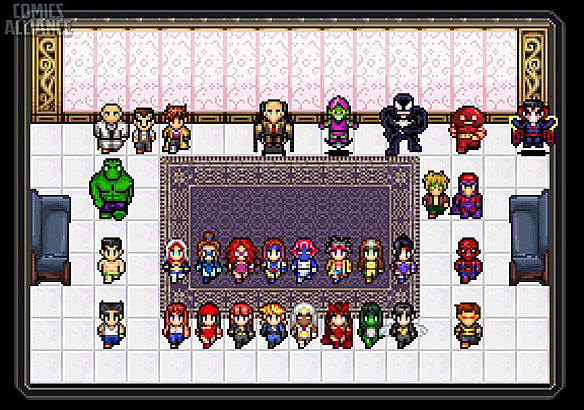 For the record, I didn't get that sweet rug, either.

I did, however, get the one scene that I think sums it up the experience better than anything else: 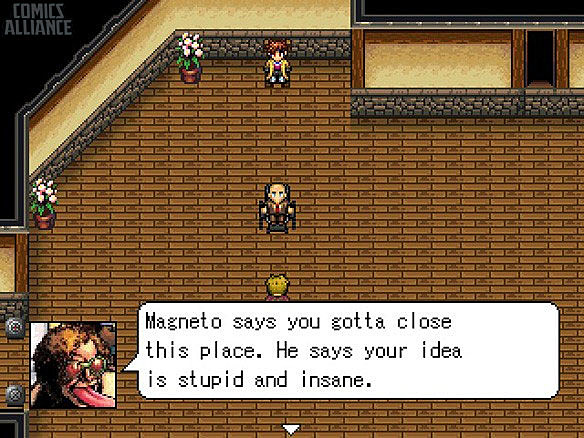 Never before have I wanted a "Magneto Was Right" t-shirt quite this bad.