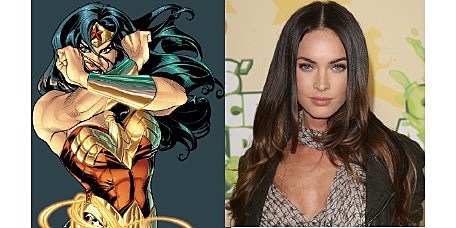 (Above: Wonder Woman blocks out the bad.)

With her film roles in the fan-favorite "Transformers" franchise and the upcoming adaptation of "Jonah Hex," model/actress Megan Fox was well on her way to becoming a darling of the comics community. Well, at least until she was asked about rumors that she might play Wonder woman in an upcoming film, in an interview that was posted today at the "Times Online":

(See the diss after the jump)

"Wonder Woman is a lame superhero. She flies around in her invisible jet and her weaponry is a lasso that makes you tell the truth. I just don't get it. Somebody has a big challenge on their hands whoever takes that role but I don't want to do it."

You're an attractive lady, Fox, but if you're gonna go all mean girl on the world's most popular superheroine -- particularly when you have no idea what she represents -- then you can take a super-long walk off a super-short pier. Despite her slamming bod, Wonder Woman is even more beloved for her intelligence and strength of character, so maybe you should stick to roles that are a little more within your scope: running, screaming, and looking pretty.