A common problem for cape comics is what is best termed an out-of-proportion amount of sexualized art. It probably has its roots in superheroes as a power fantasy for boys, and it follows logically, if a bit sadly, that women would be portrayed as the ideal sexual partner, rather than an objectively idealized character. Whatever the reason, we're mired in crappy sexualization. And the problem isn't just what that means for women, but what it means for the craft and quality of the comic. Imagery that prizes sexualization above all else -- especially when that doesn't make sense for the story -- can pull you out of the moment and stop your reading experience dead.

Over the next two weeks, I'll be talking about sexuality in superhero comics from the perspective of craft, and how different approaches to art (and sex) serve can serve the narrative, or detract from it. Today, I'm comparing and two contrasting the work of artists Ed Benes and Cliff Chiang on the same superheroine, Wonder Woman, to see how differently they approach the character, and how big an impact that has on the story they're trying to tell with their art.The line between sexy and over-sexualized in comics is a hard one to pin down. It's different for everyone, of course, but for the purposes of this post, we should probably agree on a few ground rules, just for the sake of having one conversation, rather than many. Art in a comic is over-sexualized when the women are drawn as sex objects first and heroes (or people) second. Skimpy clothes, large breasts, arched backs, and exploitative camera angles all contribute to heroines being drawn as sex objects. For a good example, check out this image by Ed Benes, which was part of the promo push for Blackest Night: 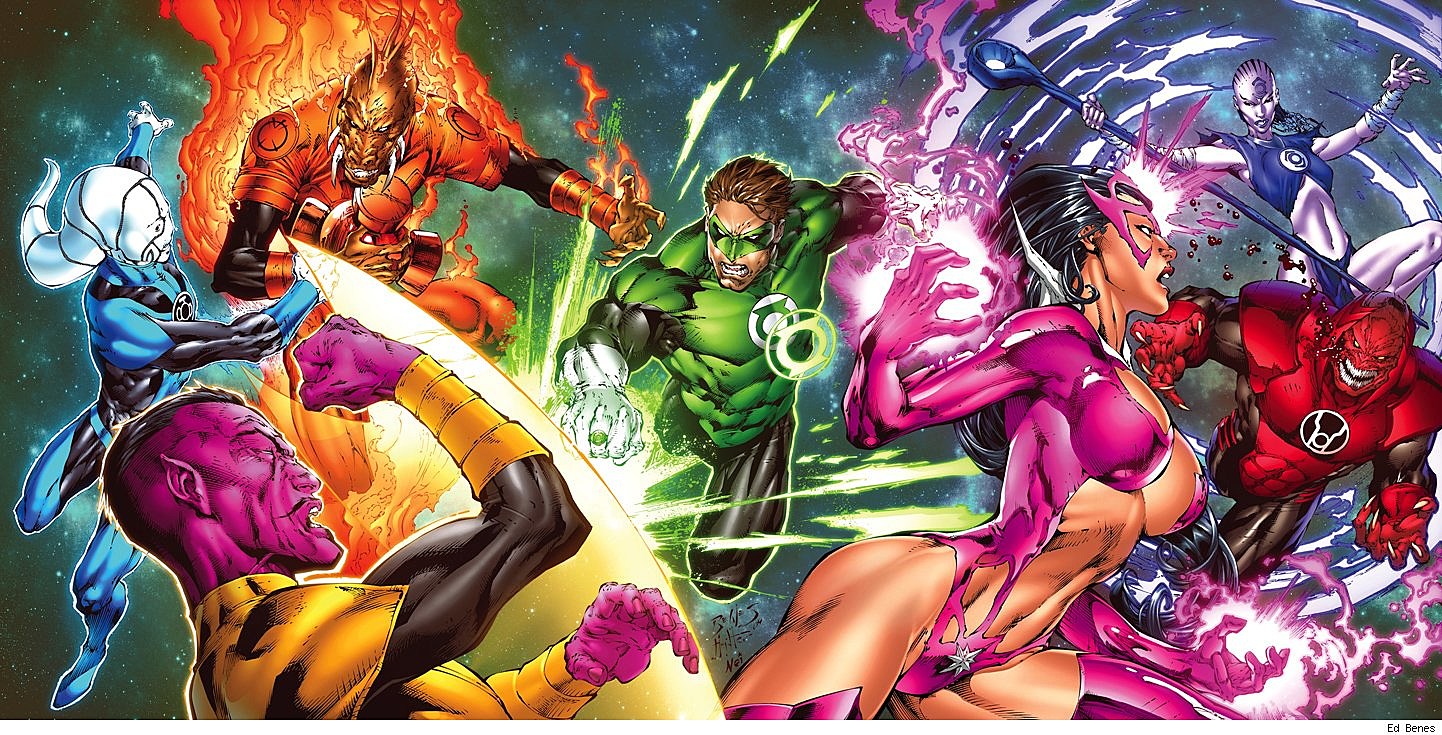 There are five fully-dressed men on the page, but the two women have as much skin on display as possible, no matter how unlikely it would be. Star Sapphire, the one in the foreground, is a particularly terrible example of the depths superhero art can sink to, as there's nothing reasonable about her costume, from her high collar to her cleverly-placed superhero emblem. Her breasts and butt are emphasized to the detriment of the story this image is trying to tell. The image is, at least theoretically, about a vicious war between several different factions. In practice, it's about fully-clothed, over-muscled dudes growling at each other while a lady vamps with barely any clothes on nearby.

The most egregious example of how Benes in specific and superhero comics in general over-sexualize their female characters comes in Justice League of America 14, written by Dwayne McDuffie and drawn by Ed Benes. Half of the Justice League has been captured as a result of Lex Luthor's latest scheme, and Superman and Black Lightning go on the offensive to rescue their teammates. Here's how Benes chose to depict the captured team: 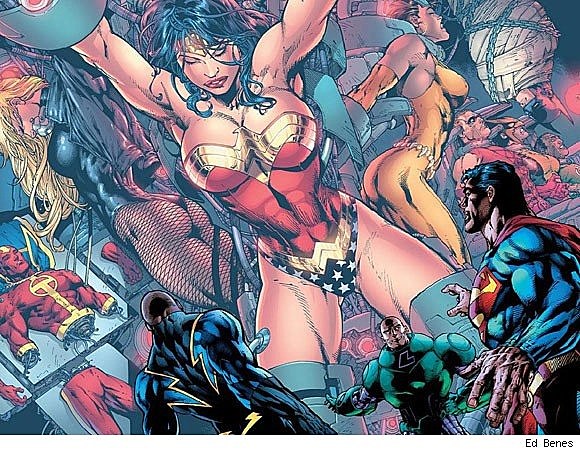 What does this image actually tell you about the story at hand? The art is undeniably suggestive, with Wonder Woman's breasts front and center, Vixen in a position that could be most charitably described as "aggressive doggy style," and Black Canary's breasts and butt on display simultaneously. Oh, and in the background to the left is a bisected robot, and nearly hidden off to the right are four more members of the JLA, three-fourths of which are male. But the focus of the page, the first thing your eyes go to when turning the page, are Wonder Woman's breasts.

How does this enhance the story? Lex Luthor is pulling off a very basic supervillain plan here, and he's not a character where you'd expect a BDSM-inspired damsel-in-distress plot, so the sexualization doesn't add anything to the scene. It's just a chance for the reader to get a quick thrill and the artist to sell the page for extra cash. Sex is the focus, rather than the danger. That saps all of the tension from the scene and fundamentally changes how the comic works.

T&A sells, and sells well, to a specific subset of comics fans. There's nothing wrong with that in and of itself, but the problem is when it becomes the point of a story where T&A isn't the point, and the actual act of reading a comic book becomes less fun than it should be.

Black Canary, Wonder Woman, and Vixen are three of the more powerful and significant women in the DC Universe, and the difference in their captivity and those of their friends is stunning. Batman has been tied all the way up, including heavy chains, despite being a normal human being. Green Lantern, Hawkgirl, and Red Arrow are strapped to chairs and presumably being tortured, judging by the looks on their faces. But our three heroines here... look at how they're restrained. They aren't being tortured. They're being displayed. And what does it say about this type of cape comic when the thought of heroines being tortured (i.e. treated just like the rest of their fellow heroes), is a more pleasant one than how they're depicted here? 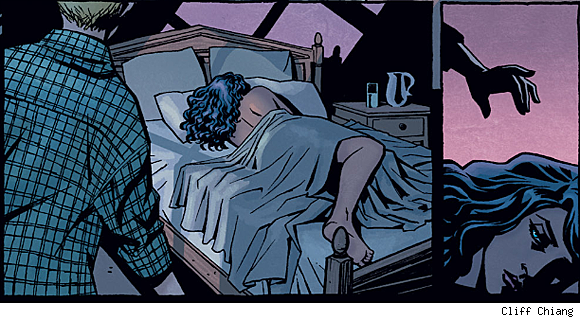 On the other end of the spectrum, we have Benes's polar opposite, Cliff Chiang, who is currently the primary artist on Wonder Woman. While Benes is best-known for delivering art similar to Jim Lee's style but with poutier lips and fuller proportions, Chiang has made his name on books that feature very down-to-earth settings, or extraordinary settings approached in ordinary ways. His work on Doctor 13 wasn't so far from his work on Human Target -- both series used Chiang's eye for fashion and detail to great effect, and the acting in his art is second to none.

It's impossible to find a 1:1 comparison of Chiang and Benes's Wonder Women, but the first issue of the new Wonder Woman featured a scene that would have been very different under Benes's pencil. Zola, a young woman in danger, appears in Wonder Woman's bedroom. Wonder Woman wakes up, finds out what's going on, and then puts on her costume. Zola is wearing a long-sleeved shirt, a tank top, and her panties. Wonder Woman sleeps nude and is nude until she puts her costume on, a detail that suits her character and is presented very matter-of-factly. 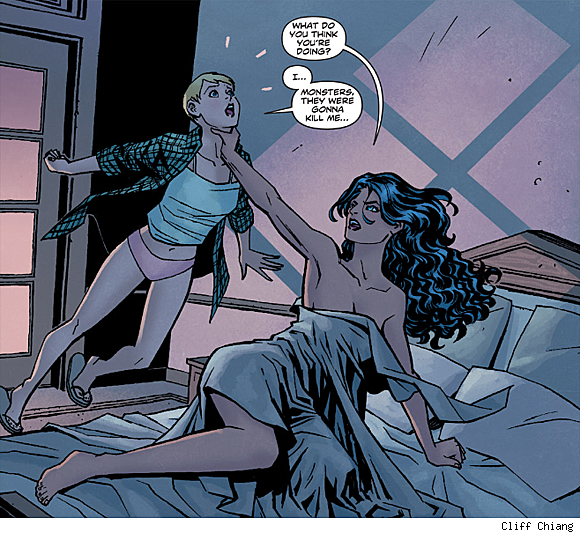 As far as chances for cheesecake go, this is prime material. Both ladies are naked or near-naked, no one's going to wear any pants any time soon, and it's a dark night. Start your fanfiction engines... now. But these four non-consecutive panels do a pretty good job of showing the difference between over-sexualization and good comics art.

Chiang had every chance to go cheesecake with this scene, and he didn't. Instead, he chose to focus on telling a story. The scene is four pages long, and there's nothing as absurd as the restrained heroines in Benes's spread; the nudity is done in a way that never adds a sleazy layer of exploitation slime to the proceedings, because it isn't the focus. The panels lose some of their impact when viewed individually, but together, they paint a scene that's full of both tension and a wry sense of humor. Diana is naked, but that isn't the point. It's simply a building block for a scene, one brush stroke in the picture that is Wonder Woman #1.

The difference between Chiang's pages and Benes's bothers me every single time. Chiang understands that sexualization has a time and place, and that time is not when you're trying to tell a serious story with serious stakes. There's a certain level of titillation inherent in a naked Wonder Woman, but it never tips over that edge and becomes the primary focus. There's an intention to the nudity Chiang draws that is based in character, while the only point of Benes's cheesecake is to get your rocks off. One page stops a comic dead. The other gets you reading faster and faster because it builds a story up. 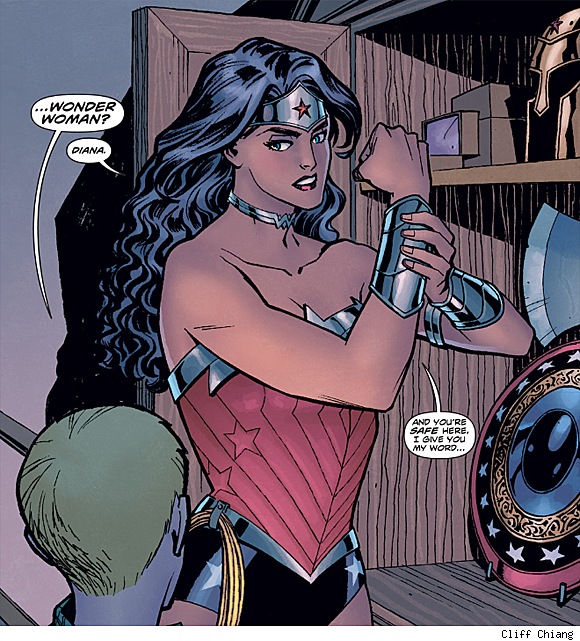 Cape comics exist to tell stories. There are a variety of stories they can tell, from mysteries to sci-fi to cheesecake to drama to existential examinations. The problem is when the streams cross to detrimental effect. In certain proportions, mixing those stories is fascinating. It's when things get out of proportion, when things turn grotesque, that the entire enterprise begins to fall apart.

Nobody wants to read a murder mystery where the ending is a space alien drops out of the sky and zaps everyone into being a good guy, or a comic about existential terror that ends with Superman punching the terror away. Those situations sound ridiculous -- just as ridiculous as a big fat overbearing slice of cheesecake in what should be a normal adventure comic.