Picking up where yesterday's post left off, this is a look at ten books being published in October 2007 that you might otherwise miss. From art school girls to gun-toting library police, there's a little something for everyone to enjoy here. 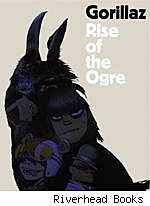 Ok, I'm going out on a limb here, but bear with me. One of the creators of the Gorillaz is long-absent-from-comics Jamie Hewlett, best known for creating Tank Girl. Now, I'm not a big fan of the Gorillaz (time to turn in my cool music card, huh?) but I've always loved the visual style of the characters thanks to Hewlett. Now, since this is a graphic novel, I'm hoping and praying that it's illustrated by Hewlett. Because if so, I'm running out and buying it. If not? Well, perhaps not. So this potential hit might really be a bit of a miss. Fingers crossed, everyone, because we need more Hewlett comics.

WET MOON VOLUME 3 GN
by Ross Campbell
Cleo and her friends continue to navigate the sea of relationships that washes through this strange little southern college town of Wet Moon. But the waters are rarely calm and the waves are unending. Can this little clique make it without sinking or will the weight of their secrets and insecurities leave them drowning?
SC, 200pgs, B&W, SRP: $14.95

Do you know what I love the most about Wet Moon? The amount of actual plot in the books isn't terribly high (although don't get me wrong, there is definitely a plot) but it's utterly engrossing because of Campbell's rich characterization in his cast of college freaks and counter-culture members. The art itself is also well worth noting, a gorgeously rich and thick ink line that draws everyone in wonderfully full and lush ways, while always looking realistic. Campbell's profile might be going up with his upcoming book for DC's Minx line, but Wet Moon is where it's really at. 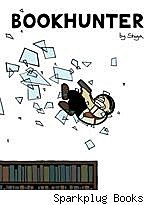 BOOKHUNTER GN
by Jason Shiga
The year is 1973. A priceless book has been stolen from the Oakland Public Library. A crack team of Bookhunters (a.k.a. library police) have less than three days to recover the stolen item. It's a race against the clock as our heroes use every tool in their arsenal of library equipment to find the book and the mastermind who stole it. Will the detectives catch this scoundrel?
MATURE THEMES
SC, 7x10, 144pgs, PC, SRP: $15.00

It's 24 meets Encyclopedia Britannica. I mean, come on, what more can you ask for? (Ok, how about the lead character propelling himself backwards through the air in order to take out the bad guy threatening to destroy a pile of books in the opening scene? And yes, when I say "take out" I mean shooting to death.) This is such a strange collision of library geekism and action-adventure that it's almost hard to wrap your head around it, yet Shiga makes it work. And admit it, haven't you always been afraid the library police are going to knock on your door and yell at you for having your books overdue?

THE KINDAICHI CASE FILES: THE MAGICAL EXPRESS
Author: Kanari Yozaburo
Art By: Sato Fumiya
Rating: T (Teen Age 13+)
The Magical Express is a train that runs between Tokyo and a remote town, but what makes it unique are the magic shows put on by a group of prominent magicians. The "Hell's Puppeteer," however, has decided to kill off the magicians one by one, seemingly delighting in the magical aura that surrounds these seemingly impossible murders. But who is the "Hell's Puppeteer"?
SC, 5x7, 192pgs, B&W (16 of 27), $9.99

Come on, don't you remember where I told you before how great The Kindaichi Case Files series is? This series of mysteries is fun in part because you can try and solve it before the main character, and in part because Kanari Yozaburo's stories are just so darn clever. There's a real lack of ongoing mystery series in comics being published right now (Case Closed from Viz is the only other one leaping to mind) and I admit it, I'm a little needy. I want more. So please buy 50 copies (give them as holiday gifts to everyone you know) so that more publishers will jump on this bandwagon.

OWLY VOLUME 4: DON'T BE AFRAID TP
by Andy Runton
The fourth graphic novel in the award winning, all-ages series, Owly: Don't Be Afraid tells the story of new visitor to the forest. He may be misunderstood because of how he looks, but things aren't always what they seem, and everyone soon finds out that the power of friendship can fix just about anything. Relying on a mixture of symbols, icons, and expressions to tell his silent stories, Andy Runton's clean, animated, and heartwarming style makes it a perfect read for anyone who's a fan of Jeff Smith's Bone or Mike Kunkel's Herobear and the Kid.
RES. from Previews Vol. XVII #2 (FEB073809)
SC, 5x7, 120pgs, B&W, SRP: $10.00

Yes yes, I know what you're saying. You don't do cute. And this sounds cute. But you're going to have to trust me on this when I say that Owly will charm even the hardest heart out there. (I've only met one person who couldn't be seduced into loving Owly, and we've now named him the most soulless person in comics. He took it as a compliment. So there you go.) Andy Runton's art is beautiful, a real breath of fresh air, and this is one of those amazingly rare books that really is all-ages. No, really, adults seem to dig Owly as much as kids. It's just that good.