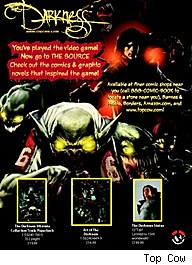 "The Darkness takes the first-person action video game to new depths on both a visual and a gameplay level and brings the graphic novel to grisly new life," said Christoph Hartmann, President of 2K. "Starbreeze Studios really captured the dark and gritty storyline of The Darkness comic book. Players can experience The Darkness through an intense and engaging game that will stay with them long after they've set their controllers down."

Set in the dark and seedy underbelly of New York City and the ethereal realm of The Darkness, players assume the role of mafia hitman Jackie Estacado, the latest heir to "The Darkness," an ancient power that awakens within him on his 21st birthday. Jackie must use traditional weapons as well as learn to command his terrible new powers to seek revenge on his own crime family. The Darkness is based on the best-selling comic book series of the same name, published by Top Cow Productions and created by Marc Silvestri, Garth Ennis, and David Wohl. The Darkness comic book launched in 1996 and is currently published in 19 different languages around the world. New and existing fans alike of the comic book can read the two story arcs which served as inspiration for the video game in the recently released The Darkness Ulitimate Collection Trade Paperback. Fans can also get an expansion of the video game storyline through The Darkness Levels comics, where each "level" issue corresponds with the same level in the game.

"We are excited to work with 2K and Starbreeze Studios to bring The Darkness from the printed page to the next-generation consoles," said Marc Silvestri, Founder of Top Cow Productions. "Since we have all worked very closely on this project, fans of the comic book will be pleased with how accurately and effectively it comes to life as an incredibly visceral and enjoyable video game."

Innovative features include:
• Varying manifestations of the Darkness allow you to devour, impale or implode your enemies. Use the Darkness to toss huge objects like cars as though they were toys.

• Summon darklings - impish and humorous demons - to do your bidding and eviscerate your foes.

• Cannibalize your victims – Slay your enemies and command the Darkness to eat their hearts and increase your strength and power.

• The light is your enemy – Extinguish any light in your path while seeking the shadows wherever possible in order to feed and replenish the Darkness.

• Diverse voice talent – An all-star cast adds authenticity to the characters and credibility to the overall cinematic experience, including Kirk Acevedo (Oz, Band of Brothers) as Jackie Estacado, Lauren Ambrose (Six Feet Under) as Jenny Romano, and Mike Patton (Faith No More, Peeping Tom) as the voice of the Darkness.

• In-game television – Watch select shows in their entirety, including everything from Nosferatu to Popeye. Players can also tune into breaking news that directly relates to the storyline.