Q: Is there anything interesting about the Flash? Is he really a core player of the JLA like the animated series portrays? -- @JibblyChan

A: I think it says a lot about me that I always find questions like this really surprising, because I forget for long stretches of time that there are people who didn't get super obsessed with the DC Universe in the early to mid '90s. It goes without saying that this is a symptom of a larger problem I have with acknowledging that other people actually have opinions about things, and that they arrived at them by doing different things than I did, but we all have flaws we need to work on.

I mean, I won't work on any flaws I may have, but I can definitely tell you why the Flash is one of the best and most interesting characters in comics. Or at least, why he was. 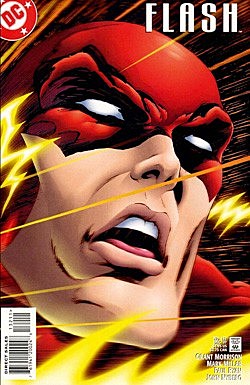 Historically speaking, the Flash is easily one of the most important characters in comics. As much as we like to assume that the DC Universe is largely built around Superman and Batman, the Flash has been at the center of things pretty often. Barry Allen's introduction ushered in the Silver Age, bridged the gap with the Golden Age by introducing the concept of Earth-2, and his death, maybe The Last Good Death In Comics, arguably marked the end of the Bronze Age, and even after his eventual (and regrettable) return, he was the character that scrapped everything for Flashpoint and the mess we're in now the New 52. When the role was given to Wally West in the mid '80s The Flash was the book that defined the DC Universe for the next 20 years.

That's where my affection for the character comes from. I think it's become pretty clear over the past 150 columns that I've always liked Batman and Superman, but Flash, specifically Mark Waid's run with artists like Salvador LaRocca and the late, unparalleled Mike Wieringo, was the book that made me love the DC Universe as a whole. The history, the details, the way things were built off each other with the potential to interact, all of that was stuff that I was completely obsessed with because of the Flash. But I'll get back to that in a minute.

For now, let's talk about the character himself. You asked if there's anything that makes him interesting, and I'd argue that right from the start, super-speed is one of the most adaptable and inherently interesting super-powers in comics. The idea of a guy who runs really, really fast is the simplest thing in the world, but when you really sit down to think about it, there are so many things you can do with it. I'm not a huge fan of Silver Age Flash comics, but I'll give those creators credit for introducing the idea of all the various "speed tricks" and really making them work in a way that made those stories exciting. It's a trend that continued into the modern age, and the best stories are able to add new twists and turns onto that same simple idea. Stopping an earthquake with a million high-speed stomps on a fault line, punches that can propel someone into the atmosphere at escape velocity, vibrating fast enough to pass through solid objects and even high-speed learning, that's all stuff that's happened in comics, and that's just the physical side of things. Once you get into the big metaphors -- like, say, literally outrunning death -- things really get interesting.

Plus, it's one of those powers that truly works best in comics. I don't want to get all Scott McCloud on anybody, but I think it has a lot to do with the fact that comics are static pictures designed to give the illusion of motion. In movies and TV, super-speed never really looks right, but in comics, artists have decades of training in trying to make still pictures look like they're moving around and interacting with each other. When you exaggerate the motion, you get an effect that you can't really duplicate in a medium that doesn't speak in a language of speed lines. 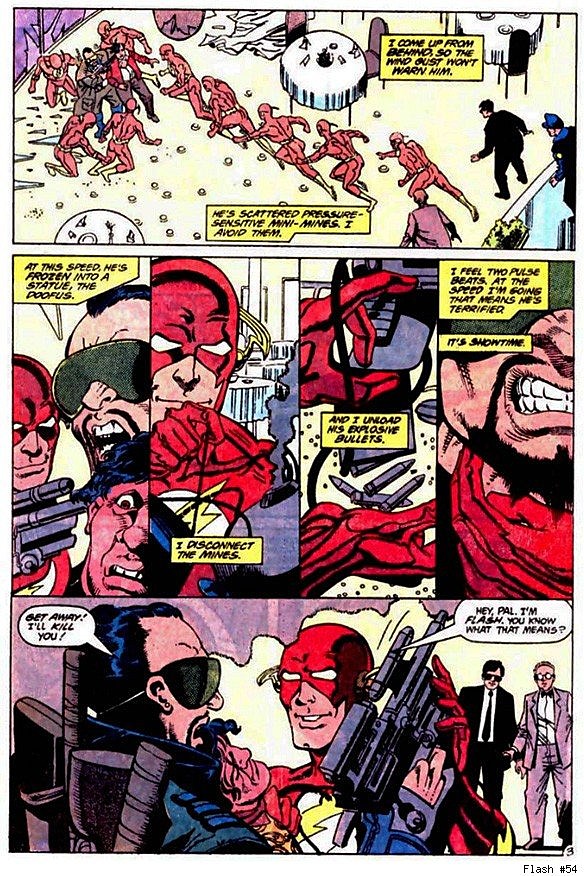 Along the same lines, I really love the idea that the extra reaction time that comes with super-speed comes with a chance to examine whatever's in front of him and decide on a course of action. It makes him a problem-solver rather than just a guy who can punch you really fast, and while Barry Allen's not even my third-favorite Flash, even I can't deny that there's a lot of merit in the idea of a scientist who gets the ability to think his way through what would otherwise be a split-second decision. Plus, there are just great ideas you can do with that stuff, like the issue where the Flash sees a kid who's about to be struck by lightning and pours on the speed to "rescue" him, unaware that it's Billy Batson trying to transform into Captain Marvel.

Plus, that makes things extra dramatic when he's up against a problem that's moving as fast as he is. And, let's be honest here, a guy who can punch you really fast is still going to be pretty entertaining. 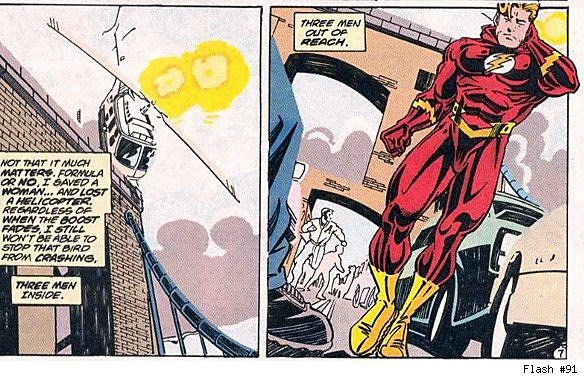 Because of that, he's a character that really rewards the same sort of approach, creating increasingly outlandish problems and then figuring out how to solve them with super-speed. You know, like that time that he had to race against a slightly off-model, non-copyright infringing Sonic the Hedgehog to keep aliens from blowing up the Earth (Note: This actually happened. In 1996). I don't mean to hammer the metaphor too hard, but when Flash succeeds, it's by moving fast and staying one step ahead of the reader. 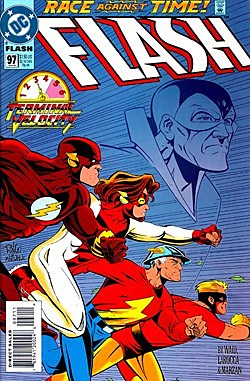 I've written pretty extensively about the relationship between Wally West and Barry Allen and why the latter was better off dead than he ever was alive, but it really goes beyond just those two characters. In the '90s, the entire DC Universe felt like it was moving forward, and a lot of that had to do with what was going on in the Flash. After Crisis, when all the various Earths had merged into one, with different characters being moved into different slots on a longer timeline, Superman, Batman and Wonder Woman were pretty much anchored into their spots, but the second-stringers -- characters like Flash and Green Lantern who were already built on replacing their Golden Age predecessors -- were given an interesting excuse to be replaced. And in a lot of cases, they were. There was a new Robin, a new Green Lantern, a new Dr. Mid-Nite, a new Doom Patrol, a new Green Arrow, a new set of Titans, a new Hawkman, a new Legion of Super-Heroes, a new Wonder Girl. And because of all that, even if we all knew they were never really going to replace Superman or Batman with a teenage leather-jacketed clone or weird religious zealot with claws, there was context that allowed readers to think that maybe there would be a new version of those characters.

The idea of legacies and carrying on a heroic tradition became a central theme in the DC Universe, and a lot of that was because it was the driving force of The Flash -- and, to a lesser extent, JLA, which was predicated on the idea of doing a big team book with all the most popular superheroes (and Aquaman) for the first time since the '70s. It probably helped matters that Wally West was a character who dated back to 1959 and was replacing a guy who went out with the ultimate, universe-saving heroic death -- as opposed to, say, Kyle Rayner, a brand new character replacing a dude who went nuts, blew up a city and started coveting rings like he was about to ask somebody what taters were, precious -- but it's just as important that he embodied the idea of a legacy.

Wally's goal of living up to his uncle's legacy became one of the driving forces of his character, and the central conflict of a lot of those stories, especially the classic "Return of Barry Allen." Under Waid in particular, the Flash interacted with his predecessors, his descendants, and even teased the idea of "younger" characters like Jessie Quick and Impulse replacing him right then and there. 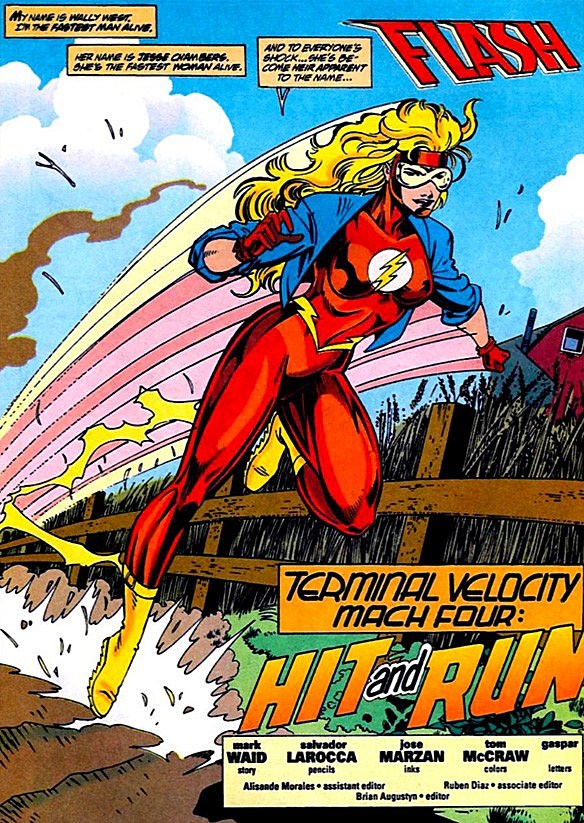 In a genre that's often defined by the lengths it'll go to in order to get the illusion of change without ever actually changing anything, there was actual change in those books. The Flash, both as a character and a comic, was at the forefront of that, and, along with Starman, did one of the absolute best jobs of balancing forward momentum against using the past to build stories. It's an extremely difficult thing to pull off, but when it works, it creates an engaging story that makes you want to learn more about what you're reading. It gets its hooks into you, and you end up obsessing about it for like 20 years.

And while the Flash was the earliest to make it a central theme, it wasn't the only one. It's the same core idea that would spread out into some of the best DC books of the era: Robinson, Harris and Snejbjerg's Starman, Ostrander and Mandrake's Martian Manhunter, Peyer and Morales's Hourman. They were all books that used pieces of the past to rebuild a rich, complex DC Universe using the ideas of legacy and momentum. It gave the DCU a foundation that was different than the Marvel Universe, which has always been more based around everything happening now, with pieces of different books popping up in unexpected places (like, for instance, Dr. Doom fighting Spider-Man), and it made for a really strong, unified background that supported these creators.

I don't know if I'll ever understand why they made the choice to undermine and ultimately dismantle that, first by shifting into reverse and bringing back all the old characters and then rebooting yet again to ensure that the legacy characters "never existed," but, well, that's comics. If I was interested in being fair, I might point out that they're still in the process of building the current DC Universe and figuring out what it's going to be about now, but I'll start being fair when more than four of those comics start being good.

Huh. Kinda lost the plot there for a second. The point is, whether it's acknowledged or not, the Flash is a character who has all of that as his history, with powers that are the perfect combination of being visually striking and informing his view on the world. You asked if there was anything interesting about him. I'm not sure there's anything that's not.

You know, except for, like, everything about Barry Allen. That dude's a stone cold snooze.