As much as I love comic books, I've never been all that into superhero-themed roleplaying games. My interest in rolling dice seems to be directly proportionate to the likelihood of encountering a gelatinous cube, so I tend to stick to the sword-and-sorcery genre -- and apparently, that has caused me to miss out on some truly weird stuff.

As my friend Andrew Weiss explained to me, the Marvel Super Heroes RPG's Ultimate Powers Book not only included a thorough list of strange abilities for your character, but also encouraged players to capture the outcast feeling of the X-Men by randomly generating powers and then building their characters around them. For some, this is just a weird concept, but for Andrew, this became the core of an art jam, and the results are pretty amazing. Voodoo chickens driving zombie robots, super-powered apes who battle with obscenity, alien prophets crippled by self-doubt and more, all drawn by CA favorites like Kyle Starks and Jon Morris! Check out a few of our favorites after the cut!First up, Leonard Pierce and Jon Morris's Apes**t, a gorilla with the powers of Berserker Rage, Fire Generation, Destructive Vibration and Object Telekinesis! 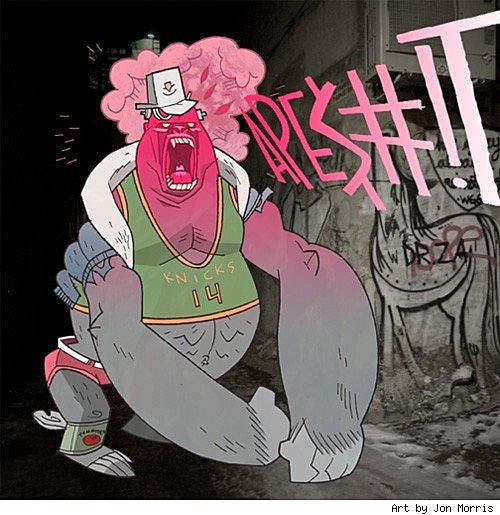 At first the experiments were inconclusive; Pogo's general reaction to being forced to watch sixteen hours in a row of various Spider-Man villains wrecking up central Manhattan was to become cross and uncommunicative, but as the gorilla was a sullen 12-year-old, this may have been attributable to mere adolescent contrariness. Dr. Crowmartin-Fitzjimson decided to ramp up the exposure, forcing on Pogo endless online news articles, web videos and podcasts about super-villainy; also, on the advice of fellow Pegasus scientist Dr. Henri Sorel, she decided to "throw some radiation in there", bathing the ape's daily media sessions in gamma and cosmic rays.

Unfortunately, like 94% of humans, 57% of gorillas, and a surprising 23% of broadclub cuttlefish, Pogo possessed latent mutant powers that were unleashed by constant exposure to the cocktail of radiation and bad news. Within weeks, he was manifesting bizarre powers in reaction to his environment: his already formidable gorilla strength doubled, allowing him to toss his caretakers around like rag dolls after viewing news footage of destructive supervillain rampages. Angry internet trolls made him behave like an actual troll, hiding under bridges and waylaying unwary muggers and pickpockets into a sound thrashing while in a berserk rampage. Flame wars made him actually burst into flame. He reacted to superhuman brawls by spinning around ferociously, kicking up a cloud of dust and causing nearby objects to fly about in a whirlwind of cartoonish violence, powered by his no longer latent telekinetic powers. Worst of all, when the stress and tension instilled by a steady stream of sensationalist super-news got too much, he was forced to use his mysterious powers – or his head would literally explode. 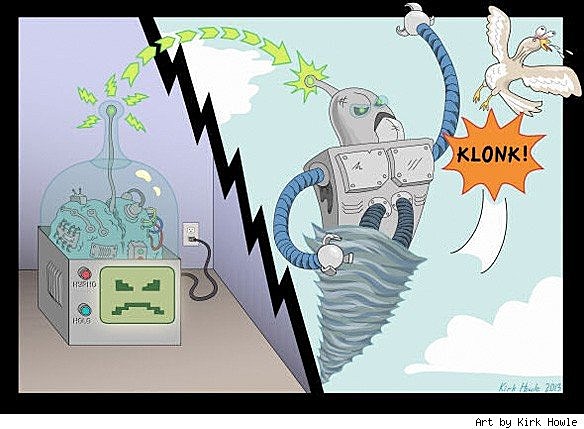 It all began in Avengers #210, when a rogue US Weather Service computer on a space station transformed a group of meteorologists into the Weathermen and used them in its attempt to cleanse the earth of humanity. The Weathermen and the computer were defeated by the Avengers; the computer was struck by one of Thor's lightning bolts and lost its artificial intelligence.

SHIELD agents studied the computer to make sure it would no longer pose a threat, and then took some of its components and used it in one of their computers so they could track weather-controlling superheroes like Storm. Unfortunately, one day a bolt of lightning struck the station and reactivated the evil computer's personality! The computer decided to once again threaten humanity...

And found it was too small to do very much harm. It was just a little computer brain in a little box, and it couldn't unplug itself from the wall without shutting down.

From Kyle Starks, Baron Perdu, a chicken with a zombie that combines sympathetic magic, sonic generation, digestive adaptation and duo-dimensionality! 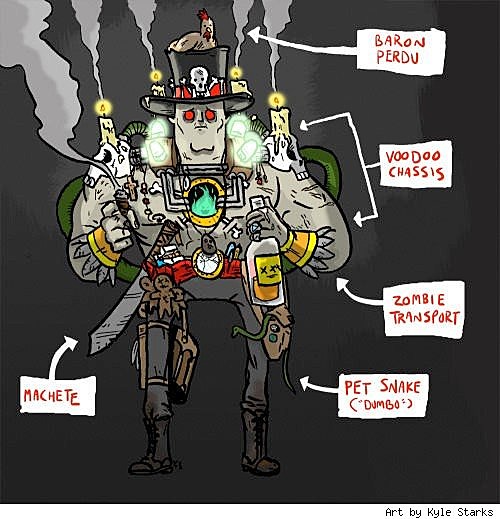 But the experiment was a failure in more ways than one. Amidst the casting and gere-gere's and grimoires they had indeed succeeding in opening a portal to the Vodun dimension. They had opened the gate. The great Guede and Loa of Voodoo mythology saw what was in place and could not allow it. Dark or Petro Voodooism is a very small part of a greater Hoodoo. Baron Samedi and Damballah looked upon it with the disdain expected of any wise God so these repulsive actions could not go through. So they sent one of their own through to attempt to stop it. Like all summoned Loa he was to immediately find his Horse, he was to locate a living being to possess and to use his immense powers to halt the unimaginable terror that was underfoot.

Sadly, for the lesser Ghede the only living thing in that room...was a chicken, one of the few, still in cages, that had survived the night of bloody sacrifice. So born onto the earthly plane was Baron Perdu.

Even more unfortunate for the Circle of the Bitter Loa was that despite only being a chicken, he was still a Vodun Ghede and therefore had just enough power to command the zombie in the room. Who happened to be wearing an artifact of unbelievable strength and powered by the very source of his homelands

From Ken Lowery and Cathy Leamy, Worrybird, an alien monarch with the power of flight, remote sensing, hypnotic voice, zombie animation, prehensile hair, and a crippling case of impostor syndrome: 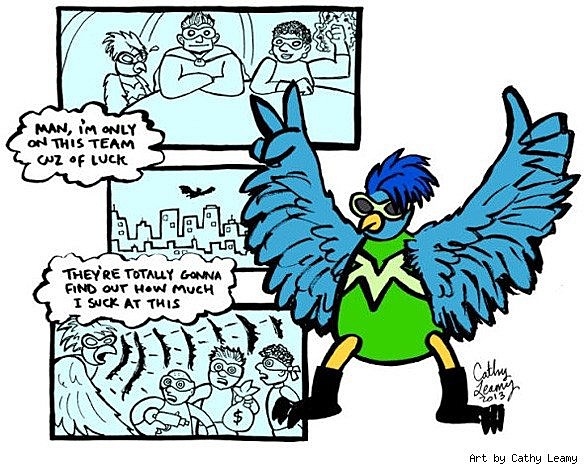 Possessed of an unspeakable urge to do great things but with no official demands, discipline, or reason for being to shape him, Hawksley wasted most of his childhood messing with his hair and trying on different shades of Lycra. Nonplussed by his father's advice to "I don't know, get a liberal arts degree?" and crippled by the certainty that he was a talentless, purposeless waste of space, Hawksley hitched a ride out of the Commonwealth with his diplomat brother and never looked back.

Through a series of mishaps as convoluted as they are ultimately pretty dull, Hawksley veered way, WAY off course. Suffice to say that about one day after telling his brother he'd "catch up with him at the Galactic Wall Drug," Hawksley found himself awakening from cryogenic sleep after crash landing on the National Mall.

His introduction to humanity was dramatic, and so he felt obligated to accept the gravity bestowed to him. Plus, he lies like crazy when he's nervous. And that's why the entire world now thinks Hawksley is a cosmic harbinger of doom possessed of great powers who has decided to become a force for good. "My opponents," he said in his first television interview, "will learn to worry when they hear my call. Like, a lot. Just worry their heads right off. It'll be nuts."

The moniker that followed was as unfortunate as it was inevitable.

For more, including all the FASERIP-ing action of the actual stats and biographies for the characters, check out the Ultimate Powers Jam!