Though it might feel like it now sometimes, autobio comics haven't always dominated the independent market. Despite a panorama of undergrounds in the sixties, Western comics didn't really do autobiography until the seventies, when the brilliantly troubled Justin Green and the cantankerously regimented Harvey Pekar released their respective books, "Binky Brown Meets the Holy Virgin Mary" and the long-running "American Splendor."

Leading up to the eighties, the movement built slowly but impressively, adding a cast of quirky newcomers and attracting throwbacks from previous eras like R. Crumb and Will Eisner. There had been some explorations but no territory defined. And it's in this dark environment that a young Eddie Campbell released a flare.

"Alec: The Years Have Pants" collects 640 pages of strips dating back to the hoary days of the late 1970s. Culling material from Dark Horse, Eclipse, Tundra, Fantagraphics, Eddie Campbell Comics, and even photocopied DIYs, this handsome compendium from Top Shelf Productions not only makes a fine weapon (even in paperback), it definitively answers that epic question: Is Campbell the best autobiographical cartoonist of all time?

No duh.The problem with many autobio comics is their incompleteness. Besides the sad fact that many get lost in solipsism and mopeyness, in general they lack the randomness and irrelevance of everyday life. With their tunnel vision burrowing away and the over-importance they place on the central character or story, books that are intended to convey real life get lost in ways that seem more and more unreal. Even some very, very good books seem to rest on a certain level of self-importance that can be positively irritating. No such problems hamper "Alec." 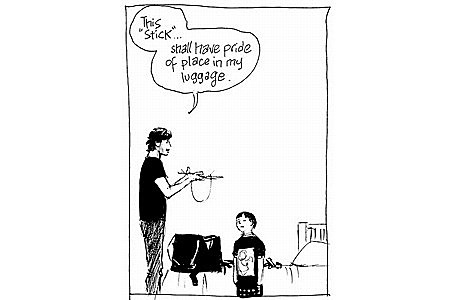 Campbell renamed true-life characters in his first book to protect them, and gave himself the moniker of Alec MacGarry -- a decision which he's regretted ever since-- but at no point does Campbell give the impression that there is anything noteworthy or important about his stand-in, or his tipsy adventures. "Alec" triumphs over so many autobiographical comics about work or sex or art because it is about all of these and everything else. It's about life. Anything that fits into life fits in to Alec, and as the years go on the conflicts change. The wild pub nights and existential confusion of "The King Canute Crowd" becomes the intoxicating awareness of one's own savagery in "Graffiti Kitchen," the quest for success in "How To Be An Artist," the reality of a bread-winning family man in "After The Snooter."

Campbell's storytelling mastery also allows him to pay tribute to the shades of real life typically forgotten in autobiographies. Throughout his anecdotal journaling, strict attention is paid to the details, the quiet, random moments that leak through the routines. Awkward gaps in conversation and the arbitrary thoughts that bubble up through awareness are not only given equally importance, they are in a way the very heart of the stories. Portrayed in quirky, clever ways that knife through storytelling convention, these short, ethereal musings are the glue that binds everything together.

From the beginning, Campbell's artistic style is distinct from the humdrum. Rendered in impressionistic swatches of Zip-a-Tone and loose, confident slashes of ink, the art is subtly chameleonic and strongly evocative of the moments they express. Slight changes in line strength here or there modulate from silly to serious at a flick. Panels drawn from memory are sketchier and less defined; panels drawn from photographs communicate the realism of captured moments.

As the years go on, Campbell's art evolves and becomes more refined, hitting its peak in the subtle washes of "After The Snooter," but his playful approach to storytelling allows him no rules. Whatever style best conveys the moment is one employed – classical renderings, childlike scribbles, and everything in between are woven together in a fine mesh, a net trapping the reader in the narrative.

It's difficult to offer a complete review of each story collected, because it not only covers 640 pages and several fantastically told stories, it spans thirty-some years of a real life. Parenthetically titled as "A Life-Sized Omnibus," it's not simply an exaggeration. These stories travel through Campbell's journey from an eager, confused young artist to the sequential art master he is today.

And strange as it may be for a 640-page book, even this collection is not complete, missing "The Fate of the Artist," available separately from First Second. Top Shelf makes up for that omission by including a new collection of previously-unseen anecdotes collected over the last twenty-seven years, and as usual they are funny, poignant, and masterful.

Since page one, it's been apparent that Campbell's goal was to live the life of an artist, whatever that turned out to be. With this omnibus, it's painfully apparent that he's achieved that goal. Many of his latest Alec efforts have been concerned with thoughts of his demise, and with the breadth and quality and this collection, he may be relieved to know that he can now officially die, his legacy fully intact, his status as the best autobiographical cartoonist firmly cemented.

It's fair to say that comics would be very different if not for Eddie Campbell and "Alec." For years his influence shaped the world of readers who had not even heard of him. If not for Campbell, the British Invasion of the 1980s might have been very different. These are the comics that pushed Alan Moore, Neil Gaiman, and the rest of the first wave to drag comics out of the ghettos and into some recognition of literature, even a bastard literature. In essence, every great comics writer of the last three decades has drawn influence from these stories, whether they knew it or not. These are even the very comics that inspired Top Shelf co-founder Chris Staros to step into publishing.

In Campbell's homeland of Scotland, there are still pubs with the sign "No Dogs or Campbells Allowed" hung out over the front, a grudge held over from "Braveheart" days, when our ancestors (my mother's side is Campbell, coincidentally) fought for the English in the battle for Scotland's independence. Is this ancestral gaff what sent Eddie out into the world? Was he trying to redefine comics or just looking for a place to get good and pissed?

Whatever the case, count your blessings, people. As dark and unexplored as the land of comics remains, we can avoid many dead ends and pitfalls thanks to Eddie Campbell and Alec. Cheers!