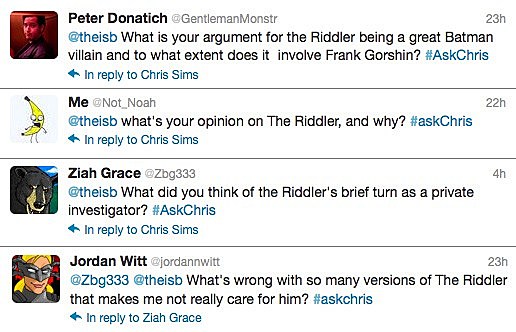 A: Huh. Probably should've seen that one coming.I love the Riddler. Generally speaking, I love most of Batman's villains; one of his greatest strengths as a character is that he has what is unquestionably the single greatest gallery of foes in comics. Most other super-heroes are limited to a few genuinely great bad guys to play off of while the rest of their time is spent punching out the Trapster or the Toyman or whatever. With Batman, though, it's one classic after another. The only one who even comes close is Spider-Man, but even Batman's second-tier scrubs are more entertaining than anyone else's.

I mean, I realize that I'm the only person who has a deep and abiding affection for the KGBeast, but even without him, you've got The Joker, Catwoman, Ra's al-Ghul, the Scarecrow, Mr. Freeze, Poison Ivy, Two-Face, Deadshot, and the list keeps going from there. They're so simple in concept that they've become archetypes, built around streamlined visuals and super-powers, but still hold their own as complex characters. Even Bane, the poster boy for the pre-fab Event Villain, is actually pretty well-crafted. And the Riddler's right there with best of them.

And yet, it's been my experience that a lot of readers dismiss the Riddler outright, often because they see him as a goofy product of a bygone age. For them, the Riddler's just another gimmick for writers to hang their puns on. They think he's corny, and to be honest, they're not wrong. 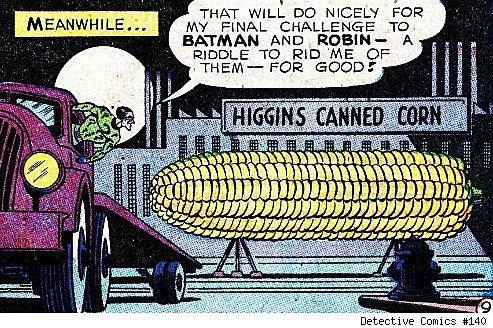 My old pal Dave Campbell even went so far as to coin the term "The Riddler Factor" to describe the magic combination of circumstance and McGuffins put into place so that a story about an otherwise lame villain can fill up an entire comic. For him, there was no reason in the world that any story involving the Riddler should last more than, say, half a page of Batman punching him in the face and throwing him back into Arkham. He is, after all, just a guy in a suit.

But that's the thing about the Riddler: He's not just a guy in a suit. He's a genius in a suit.

One of the recurring themes in this column that pops up whenever I write about Batman -- which, as regular readers will no doubt be aware, is pretty often -- is the idea that Batman's presence causes a fundamental change in Gotham City. I'll keep it short this time, but by virtue of his existence as the hero that he is, Batman essentially ends Crime as we know it, and the only way that Crime survives is by evolving into something else. Criminals become Arch-Criminals. Bad guys become Super-Villains. 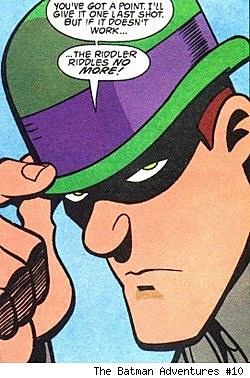 And the best super-villains, of course, are the ones that reflect something about the heroes they battle, which is why it's a good thing that Batman has become a pretty complex but very well-defined character over the past 70 years. Batman has a desire to create order in a world that took his family from him by random chance, which is how we get the Joker, a smiling murderer who gleefully spreads death and chaos. We get Ra's al-Ghul, a mastermind with a lifetime -- or more accurately, lifetimes -- of training who wants to create his own brand of order through methods that are so extreme that they can only be called genocide, to show us the moral structure that Batman has to operate within.

But as much as Batman's a crimefighter and an adventure hero, it's every bit as important that he's The World's Greatest Detective. And that's where the Riddler comes in.

See, part of the reason that Crime has to evolve is because if it doesn't, the stories are really boring. A comic where Batman is just beating up carjackers or drug dealers might be viscerally satisfying for the many ways in which you can watch him just straight up wrecking dudes -- which is, in fact, the premise of about 80% of Rocksteady's Arkham games -- but the stakes aren't there. It certainly doesn't warrant dressing up like a Dracula, anyway.

But at the same time, if your goal is to make your character a detective, to the point where you put him in about 900 comics with the word "Detective" right there on the cover... 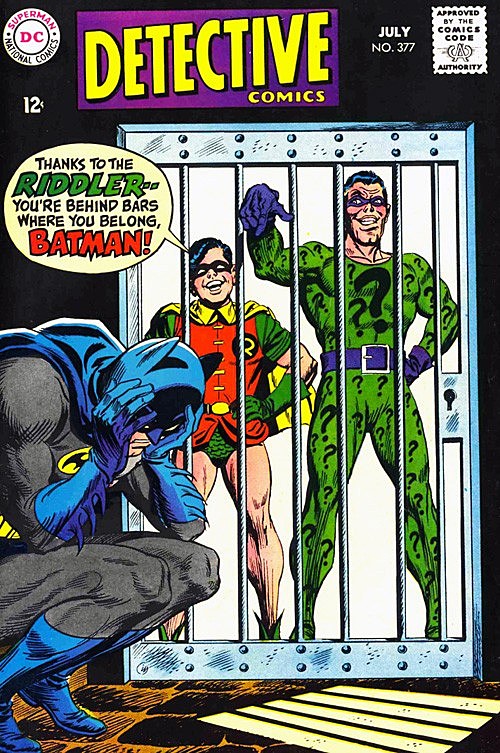 ...then thematic super-villains cause a problem of their own. Seriously, when murder victims show up with big Joker smiles on their faces, you don't have to call CSI to figure out who you're dealing with. Even the occasional fakeout story just reinforces the pattern. Also, let's be honest here: Picking up a scrap of cloth at a crime scene and going "hmm" is fine, but nobody actually wants to see Batman doing lab work for any amount of time longer than a montage. So how do you get around it?

You create a villain themed around mysteries, puzzles and clues. You create someone specifically built to challenge a detective. And that is the genius of the Riddler.

Batman has a compulsion. Well, maybe that's not the right word for it, but he's certainly driven, not just to fight crime, but to solve mysteries, to find out who the bad guy is so that he can deal with them and make people safe again. And the Riddler has a compulsion that plays off of that beautifully. He creates mysteries, but they're never the kind that you get from other crimes. In fact, the two most important questions in the traditional mystery story -- who and why -- are always answered for you whenever you're dealing with the Riddler. It's always obvious when he's involved because he wants recognition for what he's doing, and as for his motive, it's simple. He wants to beat Batman.

So the mystery becomes twisted into a challenge, and no matter what the stakes are in the scheme itself, the stakes of the challenge are always as high as they can possibly be for Batman. If he can't outwit the Riddler, then it shows that Batman can be beaten. It shows that crime can win.

That's why I love the Riddler, because he's not just testing the man, he's testing the myth. He's testing the entire persona that Bruce Wayne constructed when he decided to put on a mask and become something more than a man. If the Riddler succeeds, then we all learn the one thing that can truly destroy Batman: The idea that he can fail.

Which, incidentally, is one of the many, many reasons why "Hush" is such an awful story. 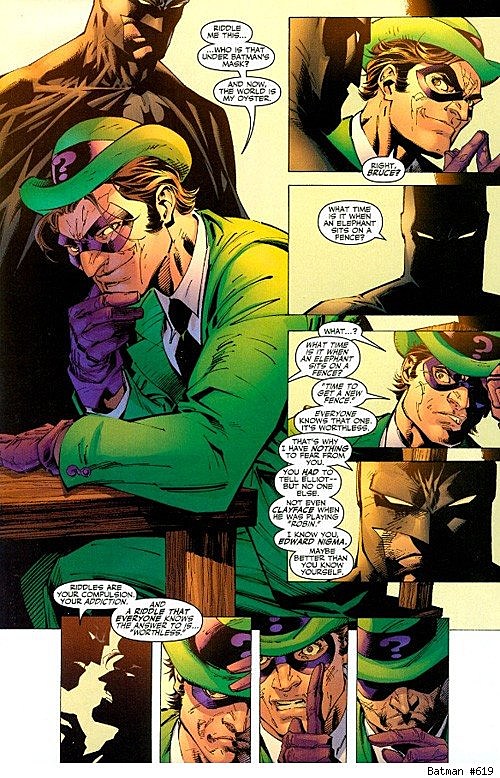 I don't want to spend any more time on this than I have to, but the entire idea of the Riddler being the mastermind behind this dumb nonsense plot is quite possibly the low point of the character's history -- and considering that it had to contend with Jim Carrey shrieking "Joygasm!" on the set of Batman Forever, that's saying something. The entire story is just a highlight reel of stuff you remember seeing elsewhere -- Batman fights Superman, just like in The Dark Knight Returns! And then he fights Ra's al-Ghul with a sword, just like in the O'Neil/Adams issues! And then he thinks about killing the Joker, just like in Death in the Family! -- stapled together in something that goes beyond rehash and actually makes those comics worse. It is a comic that you can only truly enjoy if you have never read another comic book in your life.

It's not very good is what I'm getting at.

Even the inclusion of the Riddler as a mastermind is a swipe at the character. It's meant to be a big reveal because you'd never expect the Riddler to be behind such a wicked awesome plot to kill Batman because he's such an awful villain, ha ha. And then it goes a step further by completely misreading his character during the big reveal.

The Riddler doesn't care about secrets. If he cared about secrets, he wouldn't leave mash notes at the scene of his crimes letting everyone know that he did it. The only thing he cares about is proving that he's smarter than Batman, that he can outwit the World's Greatest Detective. If he discovered Batman's greatest secret, he wouldn't sit on it in order to increase its theoretical secrecy value, he'd shout that sh** from the rooftops so that everyone would know he won.

Instead, Batman tells him "you're not going to tell anyone my secret because nuh uh!" and then punches the Riddler in the face. Because, you know, that's a great way to ensure that someone doesn't immediately set out for revenge. Storytelling, everybody!

Seriously, it is the worst. And unfortunately, that kind of story tends to be the exception rather than the rule, and it's easy to see why. The idea of a person who exists only to destroy Batman's self-made mythology is great, and there's a lot of potential to it, but that's a really difficult conflict to write. As a result, stories tend to either fall into using the Riddler as more of a prop than a character -- "Dark Knight, Dark City" being the prime example of that -- or into playing up the gimmicks rather than the conflict they represent. 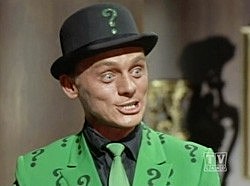 It's the latter that the '66 TV show went with, but Frank Gorshin's portrayal elevated every one of his episodes into something incredible. But the influence he created there -- the way he'd effortlessly transition from manic and giggling to cold homicidal rage with a single word, the outlandish plots, the sheer style that he brought to the role -- would end up being passed down to the modern portrayal of the Joker instead. Compare Gorshin's Riddler to Mark Hamill's Joker on The Animated Series and you'll see what I mean.

As for the twist Paul Dini introduced to the character during his run on Detective Comics, during which the Riddler reformed and used his notoriety to gain fame as a private detective, I really liked it. It's perfectly in keeping with his established goal of proving himself to be better than Batman, but by twisting it around so that now they're in direct competition. Batman, in order to maintain his myth, now has to outwit the Riddler and another criminal at the same time so that he can solve the cases first. It's a great idea that adds a layer of personal frustration to what Batman's trying to do so that things don't get too effortless, and shifting the Riddler over to a supporting role solves the problem those readers I mentioned earlier had with his inherent goofiness.

Plus, it dealt with all that idiocy from "Hush" by saying that Riddler got hit in the head and forgot it all, which is as complex an explanation as that story deserved. The only thing that was really wrong with it was how the Riddler tended to fall for the red herrings or pursue the wrong leads a little too easily. It never felt like their "competition" was even remotely close, although I guess you have to expect that sort of thing when the other character in the equation is the undisputed World's Greatest Detective.

If you really want a great Riddler story, though, pick up Puckett and Parobeck's "The Last Riddler Story" from Batman Adventures #10, in which the Riddler gives himself one last chance to outwit Batman, or else he'll retire from crime. It's hands-down the best take on the character that I've ever read.