Q: Batman outs himself as a Die Hard fan when he delivers a warning on the bodies of the downed Hyperclan members in JLA: New World Order. What are some other heroes' favorite movies? -- Morgan, via email

A: Brace yourself, Morgan, because I think this is going to be the first time I've ever said this in this column: That's an aspect of Batman that I've never really thought about. But, and this one's almost as rare, you're totally right.To be fair, Batman has a long and proud history of terrorizing criminals with notes. In fact, one of the weirder parts of his M.O. in the Golden Age was to pack up a dead bat and mail it to a crook to strike a little terror before he crashed through the window and started punching people in the face. It only happened a few times before it was phased out, presumably because a) shipping dead animals to one's enemies was a little too morbid as Batman moved away from his pulp influence and closer to the burgeoning super-hero genre, and b) even the children that were reading comics in the '40s had a hard time buying the image of Batman standing in line at the post office, tapping his foot impatiently with a cardboard box that smelled like a rotting animal tucked under his arm.

Still, that scene in New World Order -- which is unfortunately not a comic about the Justice League battling "Hollywood" Hulk Hogan, Scott Hall and Kevin Nash -- definitely feels like it has a Die Hard influence to it. If you haven't seen it... well, if you haven't seen Die Hard, then you need to not be doing anything other than watching Die Hard right now. If you have time to read this column, there is nothing you could be doing right now that is more important than watching that movie. Trust me, the Internet will still be here when you get back.

Either way, here's the shot in question:

And here's the scene from JLA #3, by Grant Morrison, Howard Porter and John Dell: 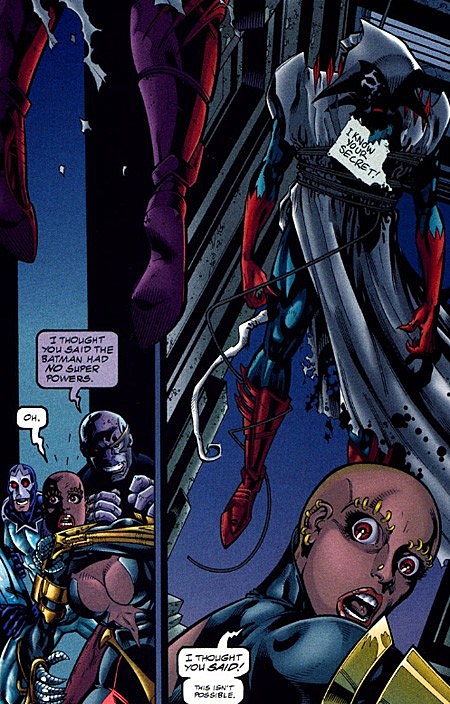 Quick aside: I doubt it'll surprise anyone to learn this, but that's one of my favorite scenes in comics. When DC relaunched the JLA as the "Big Seven" team, featuring their most powerful, popular characters and Aquaman, Morrison was faced with a pretty interesting problem. This was, after all, the first time in the post-Crisis DC Universe that Batman had been on a team with characters like Superman and Wonder Woman, who, at least by the logic that gave us "Power Rankings" on the backs of trading cards, were punching pretty high above his weight class. It's the same old problem that you get with putting anyone on team with Superman, really: How do you justify a normal guy with a belt full of boomerangs and smoke bombs hanging out with a dude who can lift mountains, take an A-bomb to the face, fly around at the speed of light, and shoot lasers out of his eyes?

Well, if you're Morrison and Porter, you pit the team against a team of alien super-heroes who -- spoiler warning for a comic that came out fifteen years ago! -- who turn out to be White Martians, which means they've got all of Superman's powers plus they can shape-shift, turn invisible and read your mind. Then you have Batman, the World's Greatest Detective, take out four of them by himself because he put the clues together and figured out what they were, and therefore their one weakness. It set the tone for the rest of Morrison's run and Batman's role in it. He's not on there because he's good at fighting or because he's rich, because that stuff doesn't matter when you're next to Superman or Wonder Woman or a guy who can make whatever you need by thinking into a ring. He's the smart one. He's the World's Greatest Detective. 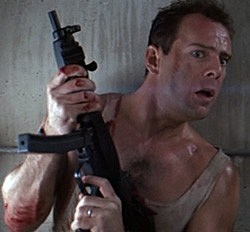 But to wrench things back to Die Hard, it makes perfect sense that Batman would be a fan -- and not just because it's the single greatest American action movie ever made. Die Hard is, after all, the story of a normal man -- a normal man with training, but a normal man nonetheless -- doing what he can against impossible odds to protect the innocent, against an exceptional thief with a deceptive and elaborate plan relying on theatrics and misdirection. He's helped by one honest cop, but hindered by other police officers and law enforcement agents who are incompetent, corrupt, or otherwise incapable of dealing with criminals operating at this level. And despite suffering through some pretty brutal injuries, his determination drives him to succeed by crawling through air vents, terrifying the bad guys, and, most importantly, dealing with being outnumbered and outgunned by outsmarting his enemies.

And at the end? Not only does the good guy beat the criminals, but in doing so, he gets back the family that he's separated from at the beginning of the movie. If that's not Batman's idea of a happy ending, then I don't know what is.

As for other characters' favorites, there are a few I can think of. Superman seems pretty obvious: 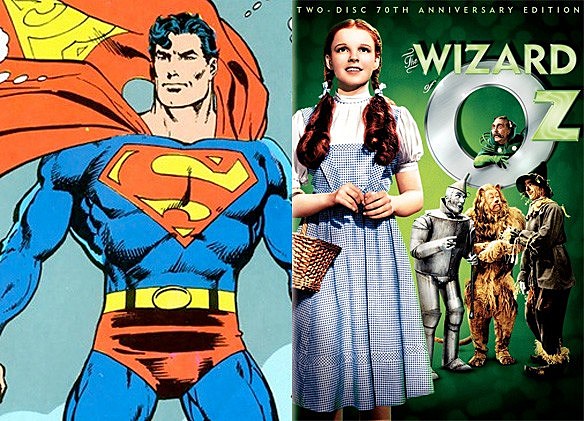 There is no way that Clark Kent doesn't absolutely love The Wizard of Oz. It's the story of a kid from Kansas who gets flown to a strange land where the people view her as the Other, initially fearful of her ability to effortlessly, accidentally defeat a great evil. But by doing her best to help the people she meets, and by standing up against someone who would hurt others, she wins out, and gets the greatest reward of all: Returning home to her family and the people who love her. There's even a scary bald dude who lives in a city of glowing green crystals.

At the very least, Superman has brought down the house at JLA Karaoke Night with "Somewhere Over the Rainbow," and given the color scheme of that movie, I'm pretty sure it's why he decided to wear a blue costume with red boots.

Spider-Man was a little tougher to figure out, but eventually I hit on one that made sense: 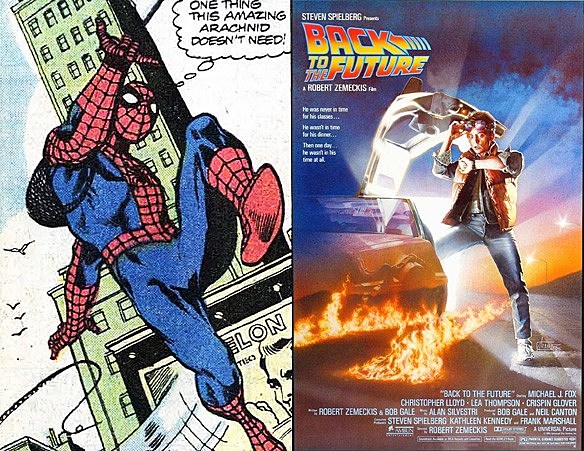 Even though the science nerd in him would cringe every time someone said the word "gigawatts," I'm pretty sure Back to the Future would be one of Peter Parker's favorite movies. Mostly, this one just comes down to the same reasons everybody else loves it. It's a great movie, sharp and funny with fantastic dialogue. For Peter, though, there's a little more to offer. It's pretty obvious that the quippy teenager encourages the nerd to stand up to the bully that makes his high school life miserable, but more than that is the idea that Marty gets to go back in time and not only fix things for his family, but he saves Doc Brown -- arguably more of a father figure than George McFly -- from being shot and puts everything right. For a guy whose entire motivation is based around a mistake he made in his past, that idea would hit home pretty hard.

Seriously: Peter Parker sheds a single tear whenever he sees a DeLorean. Put that in the Official Handbook.

The Thing was another character that came to mind, but figuring out his favorite film was a lot tougher than the others. Beauty and the Beast is a little too on the nose, and I don't think he'd dig sitting around for two hours watching a monster turn back into a handsome man, even if there were catchy songs by Angela Lansbury involved. But eventually, this one popped into my head: 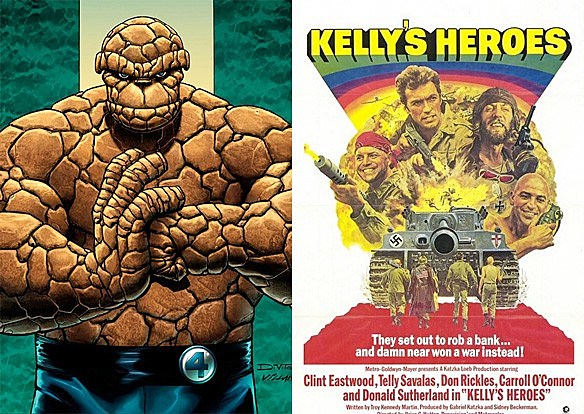 I can't really back this one up with any sort of deeper meaning or support from the text, but it just feels right that Ben Grimm would be into Kelly's Heroes. I mean, have you seen it? It's great. Clint Eastwood leads Telly Savalas, Don Rickles and Donald Sutherland (as a World War II hippie [?!]) across enemy lines to steal a cache of Nazi gold. It's amazing.

There are a few others -- Hal Jordan is definitely a dude who has never taken Top Gun out of his DVD player -- but those four are the ones that feel the most right to me. Good call, Morgan!