Q: Why do you like Assassin's Creed so much? What, in your opinion, makes the series so compelling? -- @jordannwitt

A: Assassin's Creed III came out this month, and even though I haven't actually played it yet -- reliving the Attitude Era in WWE '13 has been high priority here at Stately Sims Manor -- my love for the series is so intense that I actually left the house to buy it on the day it came out. And really, if you know anything about the life of a freelance writer, you'll know that is high praise indeed.

As for why, I'm not gonna lie to you, Jordan: It's mostly the stabbing. 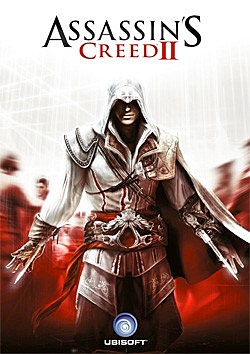 In a review of Fez, Matt Wilson wrote about how the driving force in most modern video games is whether or not it's fun to kill someone, and he mentioned that Assassin's Creed does it better than most. That's a very small part of the point he was getting at, but he's not wrong: In a medium that's flooded almost to the point of being defined by hitting buttons to make little imaginary dudes murder each other, Assassin's Creed still stands out for just how fun it's made that.

It's hard to write about this without sounding like a complete and utter psychopath, but, well, here we are, with me about to write about how great those games are at simulating blood spraying out of slit throats and the satisfying crunch of a dude's skull when you cave it in with a battle-axe. It's true, though -- the different types of weapons are all interesting and satisfying to use in their own unique ways, and while a lot of games struggle with context-sensitive actions, Assassin's Creed nails it. They even managed to build a counter-based combat system that's not a massive pain in the ass, and that's darn near miraculous.

The key, on that front at least, is simplicity. They made a game about Assassins in which there is one (1) button that you press to assassinate someone. It plays out in different ways depending on where you are, and you can set it up in different ways to accomplish different goals, but at the end of the day, that's how it breaks down: Push button, kill dude. That's all there is to it. It's the simplest thing in the world, but the fact that the actual method changes depending on other factors -- and that you can change those factors by taking advantage of the equally well-built movement system -- gives it a lot of depth.

Incidentally, that's why it was so darn frustrating when Ezio showed up as a bonus character in SoulCalibur V. I was really hoping that I'd be able to just parkour up to Ivy or Mitsurigi, hit one button and immediately stab them to death, but doing anything in that game requires you to hit about eighteen more buttons than I have the attention span for. Yes, it would've unbalanced things a little, but that's what happens when you put a guy who does nothing but kill people into a game where the rest of the characters are concerned with "ring-outs."

It's also worth noting that as a series, Assassin's Creed is one that consistently showed improvement and refinement of its core mechanics. I absolutely hated the first game to the point where I tapped out after about four hours and never went back to finish it. It was just so unbearably slow, and someone on the team had the bright idea to make guards get mad at you for moving faster than a narcoleptic turtle. Even with a plot that I was interested in, it was too much of a trial to actually get to the good part, and once a game starts to feel like it's putting obstacles in your path that you have to deal with before you can start having fun, it's not worth the effort. Assassin's Creed II, though? That thing played like a dream. They not only refined the controls, they went in and fixed all the problems that had made Altair's adventures such a chore.

And it kept up. Brotherhood's introduction of the, uh, Brotherhood mechanic was pretty fun, and even though Revelations threw in a bunch of complexities with the bombs, they didn't really get in the way of anything else. Maybe there's even someone out there who wants to use things like "stink bombs" and "strategy" and "not just running straight into the bad guys and stabbing them," but I can't imagine why that would be. I could've done without the Tower Defense stuff, but I've been a sucker for territory takeovers since GTA: San Andreas, so that one's a wash.

So yeah: Clearly, I am into the stabbing. But as for what makes the games compelling in a way that others aren't, I have to admit that I really like the story, too.

Before I go any further, I want to make it clear that when I talk about the story of Assassin's Creed, I don't mean this doofus: 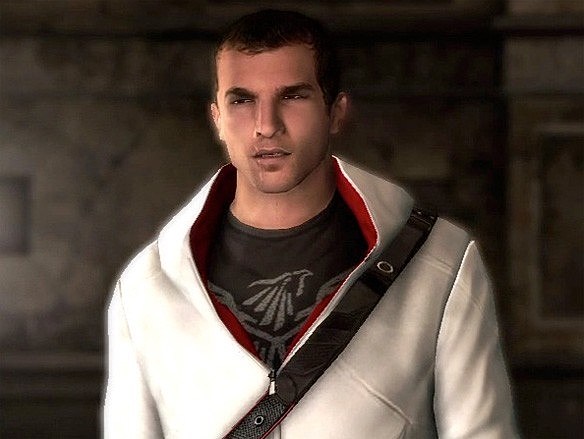 That's Desmond, and even after ostensibly spending four (well, three and a half) games with that guy, I could not possibly care less about him. For those of you who aren't familiar with the storyline of Assassin's Creed, you don't actually play as Altair and Ezio. Instead, you play as Desmond in the present, who jacks into the Matrix and relives his ancestral memories of his surprisingly murderous forefathers. He's doing this because the Assassins are still fighting the Templars who are Abstergo and they need the Pieces of Eden to find out about the aliens under the Vatican and the Reapers are coming back and only Commander Shepard can stop them and a bunch of other framing sequence nonsense that I can't be bothered with.

This dude, on the other hand? 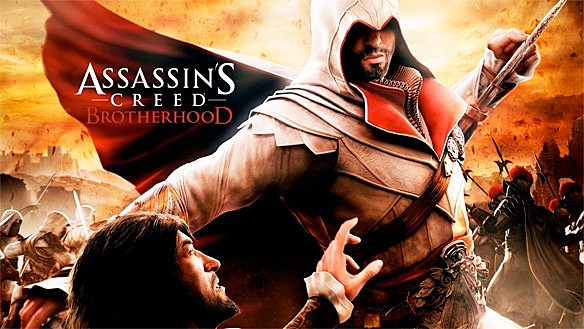 That's Ezio, and he makes the whole thing worth it. There'll occasionally be a glimmer of a cool idea in Desmond's story, but because you're spending most of the time with the characters that are one layer deeper, they're naturally the characters that have more depth and that you can more easily identify with. As a result, Ezio Auditore Da Firenze, the star of AC2, Brotherhood and Revelations, became one of my all-time favorite video game characters.

His character arc is one that I find incredibly fascinating, and while this might surprise you guys, it's not because he's a wealthy young man who watches his parents get murdered and then devotes his life to the cause of justice. My affection for that character arc is well handled elsewhere, and in Assassin's Creed, it's actually a really small part of what I like about Ezio.

Instead, it's the idea of seeing him growing and changing as he got older that hooked me. His arc in the games takes place over the course of 35 years, and they do a surprisingly good job of showing how much he changes over that time. For a game so decidedly rooted in beautifully rendered murders, the things that really stick out for me are moments like seeing Ezio as a young lover in ACII -- and not to get all Tumblr on everybody or anything, but there is nothing you can tell me that will convince me he and Leonardo Da Vinci were not meant to be read as More Than Friends. Then there's the moment where he gets his heart broken by Caterina Sforza in Brotherhood and tries to play it off, an extremely brief, blink-and-you'll-miss-it sadness that marks his transition from the passion of his younger life into the obsessive devotion to his mission, or his return in Revelations as an older man struggling with his weariness and whether he's past his prime. Admittedly, it doesn't quite address the fact that Ezio's bones should be ground to dust after 35 years of jumping off roofs in a time when medical science was more or less limited to leeches, but still. There's a consistent arc to it; you can see why the older Ezio is so blissfully oblivious when Sofia's inviting him to picnics and he just wants to talk about killing dudes. He's not the younger man who'd pick up on her signals anymore.

The end of Brotherhood is meant to be this big shocking twist for the framing sequence, and again, it was set dressing. I had no emotional connection to it. But Ezio? I could not wait to pay Ubisoft even more money to get the little animated short film that showed how he ended up.

Beyond that, there's just a bunch of other stuff I like about it. As an extremely mild history buff, I'm fascinated by the way the games use real-life historical events as the basis of the action. Hearing that all of Altair's targets were historical figures that actually had been assassinated or gone missing during the time period was originally what drew me to the series, even if it wasn't enough to keep me around.

That honor goes to the way the stories veer off the rails of history into complete bat-s**t lunacy. The motto of the Assassins -- the Assassin's Creed, if you will -- that Ezio keeps wandering around telling everyone for three games is "Nothing is true; everything is permitted," and that seems to be the writing staff's guideline for dealing with history. There's just enough there that's based on fact to make you want to go out and buy some books about the Renaissance, but when they get weird, they go for it in the most gloriously bizarre way that they possibly can.

In short, the history buff in me likes seeing Pope Alexander VI show up, but the fan of crazy high concepts loves that you get into a fistfight with him where he tries to kill you with his magic Pope staff and then you go talk to the aliens in the holodeck under the Vatican. Spoiler warning.

There's also the goofy video game logic that creeps in every now and then, like how Altair is hailed as a brilliant master assassin for taking four hundred years to come up with an idea like "hey, maybe we should carry two blades." That's always fun, but all told, the gameplay, the strong characters and the storytelling make up about 90% of what I really love about those games.

The other 10%? That one NPC who says "I've never seen a stranger man." Love that dude.