A: While my pick for the best American icon in comics would probably go to Wild Dog -- who drives a pick-up truck, wears a football jersey and camo pants, carries an uzi and fights terrorists in Iowa -- it's hard to argue that both Superman and Scrooge McDuck probably have a better objective claim to the title. After all, despite all their differences, the Last Son of Krypton and the Last of Clan McDuck are both quintessentially American characters. 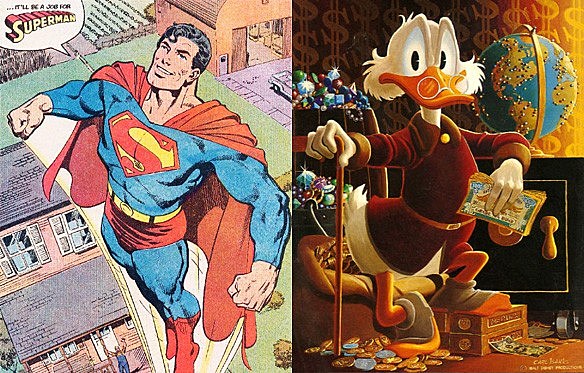 There's one obvious aspect of their characters that makes them so uniquely American: They're both immigrants who came to America for a better life. For Scrooge, it was to escape the poverty that was hanging over his family's head from a nobility that had fallen into irrelevance, while Superman was escaping the literal destruction of his home, with his parents making a sacrifice so that he could grow up somewhere where he'd have more advantages, like, you know, not being exploded. They're both trying to escape the past by coming to what's often been referred to -- at least in the country's mythology -- as a land of new beginnings.

But even that points to a difference between them that leads to two sides of the American story. While the reasoning behind their journey may be similar, the details are vastly and significantly different, most specifically in when they arrived. 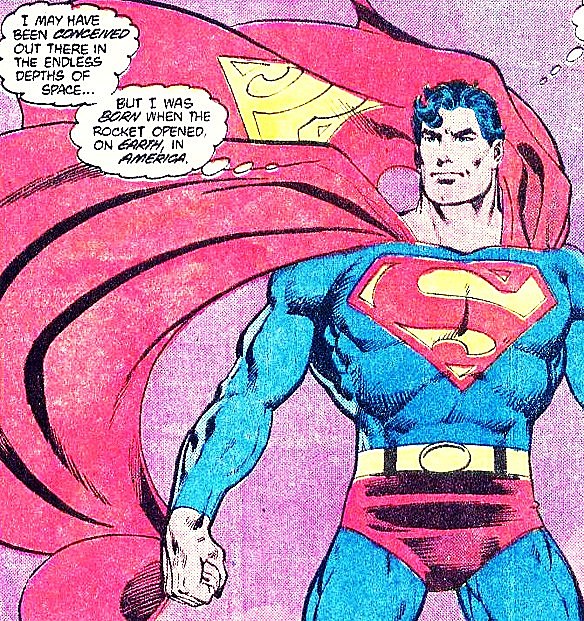 Superman came to Earth as a baby, and while the height of excess that was his Silver Age power set granted him a "total recall" memory so that he could remember his brief time on Krypton, he is for all intents and purposes an American. He grew up here, and that means that while he's certainly an optimistic idealist, he knew firsthand the realities of growing up in America -- or at least, the realities of growing up in an America that has stuff like cosmic rods and Green Lantern rings.

But at the same time, in most versions of the Superman story, he's also aware while he's growing up that there was something different about him, that in coming from somewhere else, he was different from everyone else. Of course, the mitigating factor there was that his differences involved flying around and bench pressing tractors, which certainly helps to build a young man's confidence, but I think it's a significant element that his parents -- his Earth parents -- are often portrayed as encouraging him to keep those differences a secret so that he can better assimilate into American society.

Which leads to something that's even more significant: When he finally does start operating as Superman, he tells everyone straight up what his entire deal is. He doesn't go out there and say that he's just a super-strong flying guy from Kansas, everyone in the DC Universe knows that despite appearances, Superman is an alien from the planet Krypton. And for bonus points, he does this through that distinctly American practice of manipulating the mass media by interviewing himself as Clark Kent.

Point being, in doing this, Superman represents one of the core ideals of America: No matter where you came from or what's different about you, if you're willing to pitch in and do your part, America will accept you for who you are. Now whether or not this is actually true in practice, that's a whole other column. 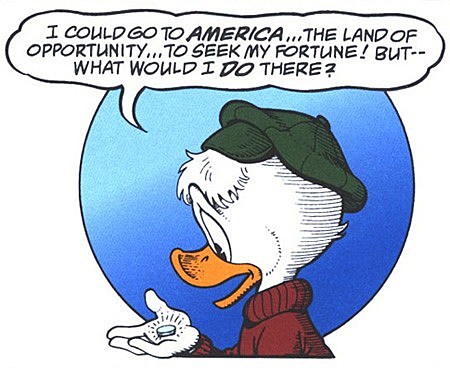 Scrooge, on the other hand, comes to America for the first time at the age of 13. That's certainly a young age, but the important factor here is that unlike Superman, he decides to come to America.

And he does so to seek out his fortune, because he's heard -- as we all have -- that America is the land of opportunity, where a man (or duck) can start with nothing and become rich through hard work and perseverance. In other words, he's sold on the idea of America, but when he gets here he's faced with the fact that "hard work and perseverance" translates to years upon years of backbreaking labor with crooks and liars around every corner looking to part a fool from his money.

Scrooge may have fulfilled the American rags-to-riches story, but he did so only through a great deal of hardship and suffering, and even when he finally gains his incredible wealth, it's a precarious position that leaves him only one disaster -- man-made or natural -- away from being wiped out.

That all leads to a very strong awareness of just what having that money means in American society. Unlike the loathsome Richie Rich, who inherited his impossible fortune and has so little regard for what money means that he has a safe made out of diamonds and gold and will never live like common people, Scrooge has a keen understanding of the value of a dollar.

It's also worth noting that Superman and Scrooge are both defined by the characters around them, though once again in opposing ways. Superman's greatest value isn't in his powers or in the physical act of saving a nosy reporter from falling out of a helicopter; his greatest value comes through inspiration. 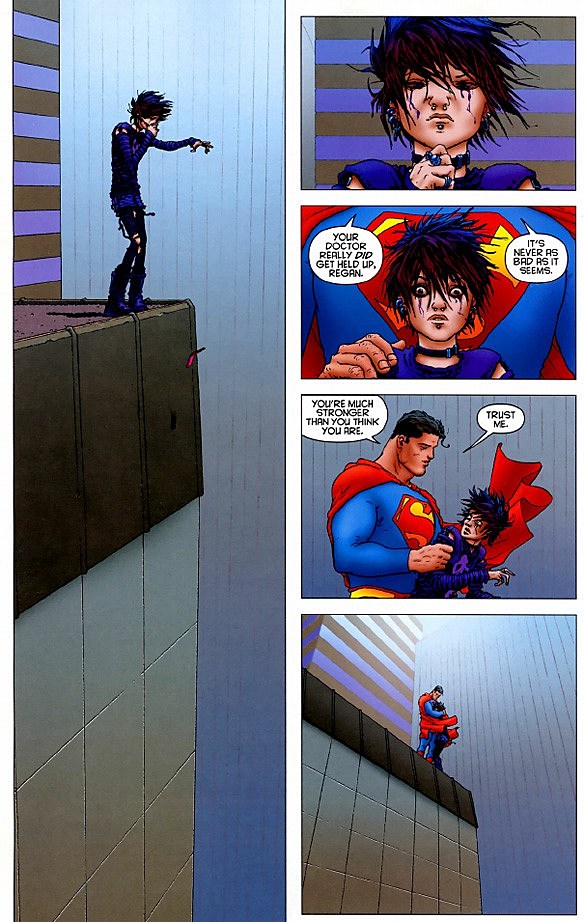 By his very existence, both in the comics and as a fictional character, Superman inspires people around him to be better people. His message -- related in several stories, my favorite of which is 1962's "The Last Days of Superman" -- is that it's not the powers that make him a Superman, it's choosing to do the right thing.

With Scrooge, he's made a better person by those around him. His first appearance in 1947's "Christmas on Bear Mountain" finds him as a bitter old miser who has completely given up on other people:

It's not until he meets Donald and the Nephews -- after testing their courage with an elaborate trick that involves bears -- that he comes to remember that he doesn't have to be apart from others. Instead, he finally recognizes something of himself, the endless curiosity, the fearlessness, the hunger for triumph, and it's only then that he becomes something greater.

They're both interesting takes on the idea of community, and how uniting with others can completely change us, just shown from completely opposite angles.

Which brings us around to the next difference that's also a key point in their American identity: The ideals they represent. 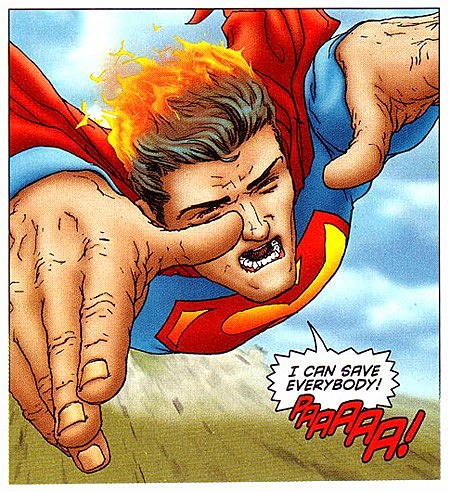 When you get right down to it, Superman is essentially a being of pure altruism. He has the power to do anything he wants. If he wanted to conquer the world and rule as a dictator, either benevolent or iron-fisted, that's completely doable. If he wanted to do nothing but lay around in bed all day playing XBox and eating pizza, he could do that too. But he doesn't.

Instead, Superman puts his powers to work helping those who can't help themselves, and while that might smack of socialism to some, it's a very important part of my understanding of America. It's certainly not unique to this country, but the idea of one person using his abilities for the good of everyone is extremely egalitarian, and equality is a pretty big deal around here.

Despite the fact that he's obviously tougher and stronger then everyone else, not to mention able to fly and see molecules, Superman doesn't declare himself king (except that one time). He uses his powers to help everyone, because in his mind, that's the fair thing to do. 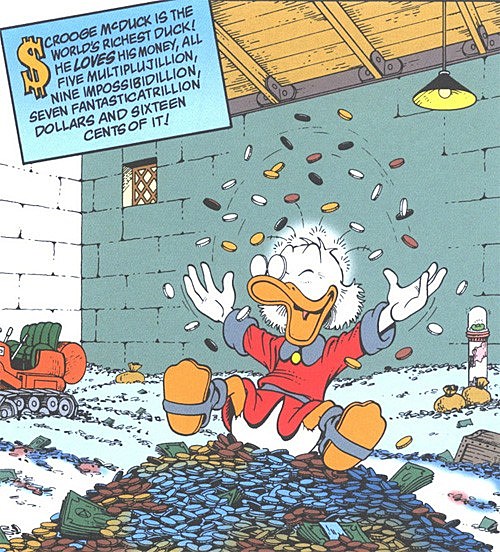 Scrooge, on the other hand, is motivated entirely by greed. Admittedly, it's a greed that's expressed as a desire for adventure that comes with a specific moral code that I'll get to in a second. He's even often shown to value every coin, bill and treasure as much for the memory of how he got it than for its actual monetary value, suggesting that it's the challenge and thrill of overcoming adversity that he truly values. And also having enough of it to swim in like a porpoise.

Either way, the root of it is an all-consuming drive for acquisition, which I don't think anyone could possibly argue isn't an intrinsic part of American society.

But at the same time, he has that moral code I mentioned earlier, and once again it's all based on the idea of playing fair.

But even with that code in place, The Life & Times of Scrooge McDuck shows that there was a time when he was so consumed by greed that he broke his own golden rule, and even the Scrooge of the Barks strips wasn't above exploiting his relatives for cheap labor and trying to weasel his way out of paying them. Even in the story with the famous "tougher than the toughies" panel above -- the classic "Only a Poor Old Man" -- sees him trying to con the nephews out of the 30 cents an hour he promises to pay them through some stone cold trickery.

In fact, in a lot of ways, his often ruthless tactics in clawing his way up from nothing to one of the most powerful people in the world -- financially speaking -- makes him less like Superman and more like Lex Luthor.

In other words, Scrooge is a character with regrets, who very clearly is shown to have his priorities wrong while traveling the world anywhere there's a resource to be exploited, from gold to diamonds to oil. Sound like anyone you know?

In the end, they're both great American icons, but oddly enough, it's the talking duck who lives in a world with Mickey Mouse whose exploits are more tempered with reality. Superman is a far better example of what we should be... 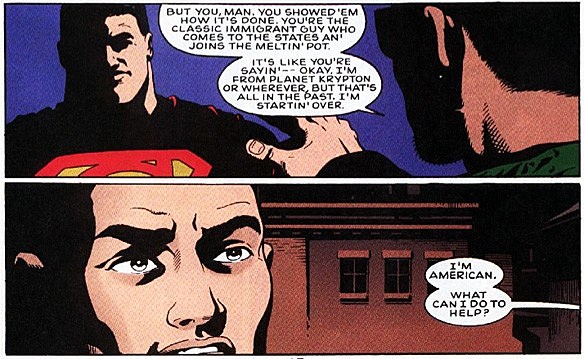 ...but Uncle $crooge is a little bit closer to what we are. 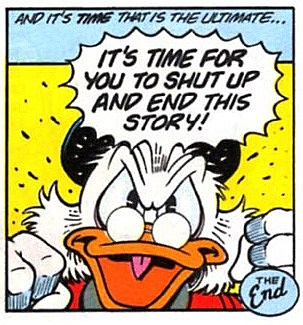 Q: I'm a huge H.P. Lovecraft fan and I've always wondered if there is a connection between Lovecraft's Arkham & Batman's Arkham, and if there is, is it more than just a shared and/or inspired name? -- Jill, via email

A: Batman's Arkham Asylum is indeed named for Lovecraft's Arkham and its notably high population of crazies. In fact, when Arkham first appeared in 1974, it wasn't even written as being part of Gotham City, but rather just "a New England Institution," which makes the connection even clearer: 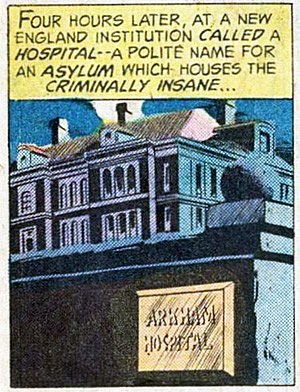 I imagine that this was originally just intended to be a throwaway reference, but by 1980, writer Len Wein used it as the basis for a story where Batman had to break into a mental hospital that featured a bunch of his villains as patients, and the rest, as they say, is history. For the record, that story -- in Batman #326 and 327 -- also features the idea that the staff at Arkham gives the Joker a mannequin wearing a fully functional Batman costume that he could use as a "target dummy," thus setting the standard for extremely questionable treatments that we know and love today.

Q: What is the Flashpoint Chris Sims like? -- @graemem

A: A lot like Age of Apocalypse Chris Sims, but newer.

Q: How do you feel about the term "brony" being applied to adult males who watch My Little Pony: Friendship is Magic? -- @CitizenPalmer

A: I actually think it's pretty clever, but then again, I am a sucker for a good portmanteau. In fact, I guess you could call me... a portmanbreau.

Q: What is the most awesome Hulk panel of all time? -- 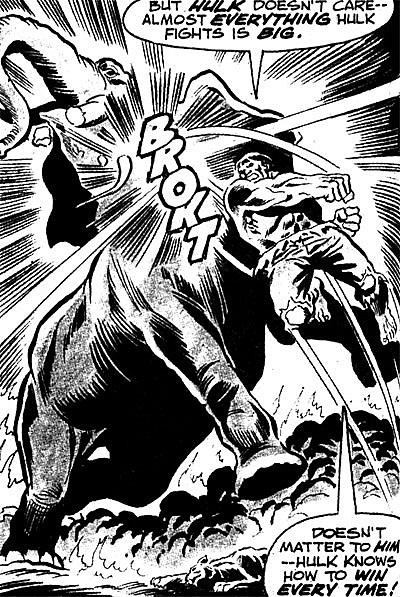