Q: Who are the top five super-heroes from the American South? --@AaronABCP

A: As readers and listeners of War Rocket Ajax could probably tell from my constant talk of barbecue and my obsession with pro wrestling -- not to mention the accent that leads me to tell people I'll do something right quick -- I'm a Southerner myself. And oddly enough, with all the fictional team-ups I thought up to kill time over the years, it never occurred to me to try my hand at creating a team out of folks from down here.

But a Southern gentleman such as myself cannot let a challenge to my honor stand, suh! So today, it looks like I'm putting together a Southern Super-Group!But it's actually a pretty tricky task, especially if you subscribe to a philosophy that prevents you from putting Rogue and Gambit -- probably the South's most prominent representatives in the world of comics -- on any list that has the word "top" involved, which I do. And a few of them even pose a tricky question of just what it means to be "from" the South. I mean, if you want to get technical about it, Swamp Thing was "born" in Louisiana, but his brain patterns were based on Alec Holland, who was from Stamford, Connecticut, which is about as Northern as you can get. Either way, I just can't imagine that guy throwing down on a plate of Bojangles, and really, that's the true test of Southernness.

Plus, there just aren't a lot to work with. Super-heroes have always tended to operate in places like New York, either the genuine article of the Marvel Universe or slightly disguised versions like Batman's Gotham City. It really just underscores the fact that for all their high and mighty rhetoric, the Justice League just doesn't give a dang about those Duke boys making a mockery of Commissioner Hogg and Sheriff Coltrane with all their blasted 'shine-running. 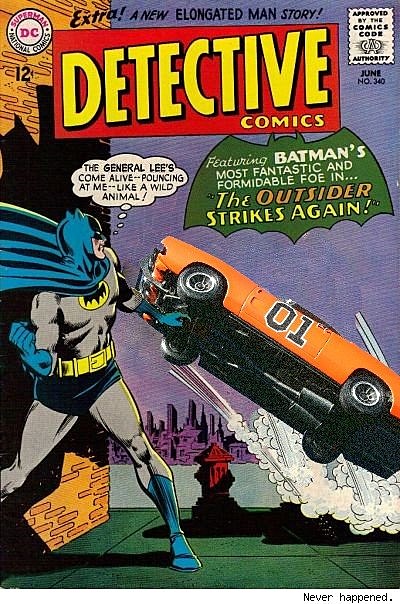 So really, when you're trying to come up with a list of the top five super-heroes from the South, you're pretty much going to be talking about all of them. And surprisingly, my picks make for a pretty solid group. 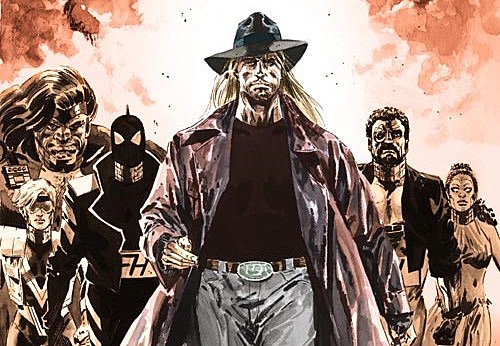 First up, Mitch Shelley, alias Resurrection Man, who hailed from the fictional city of Viceroy, South Carolina. Viceroy was also the home of the Soder Cola bottling plant -- Soder and Zesti being the DC Universe stand-ins for Coke and Pepsi -- which always scored bonus points with me, since I actually live in a South Carolinian city with a Coca-Cola plant, making it pretty easy for me to see Resurrection Man as a hometown hero.

I also really like his powers, which provided a really interesting premise for a series of ever-changing adventures. Every time he gets killed -- which is surprisingly often, even for a third-string DC hero -- he "resurrects" with a different super-power. It's pretty similar to Multi-Man (a DC fourth-stringer who had his greatest moment in Suicide Squad), with the difference being that his new power usually relates to way he died, so if he got, say blown up by a gas station exploding, he'd come back with fire-powers.

Even better, his series is getting resurrected in September's big DC relaunch, featuring the return of co-creators Dan Abnett and Andy Lanning to scripting. So hopefully, we'll finally get the story that shows whether he prefers mustard-based barbecue or or the heathen vinegar based travesty they peddle up in the other Carolina. 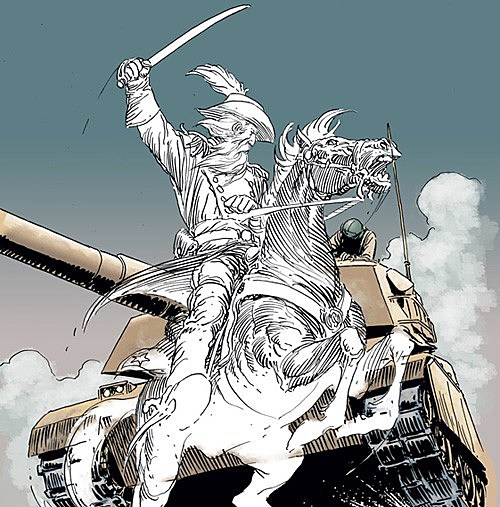 Even in comic books, a medium that has brought us stories of gorillas with jetpacks and robot Draculas, there has rarely been a high concept as monumentally over the top as The Haunted Tank. It's a tank. And it's haunted. By a ghost. This is genius.

And it's also what I'd refer to as egregiously Southern. Amazingly, I grew up in a state that observes Confederate Memorial Day, and I didn't know until I was 20 years old that the Haunted Tank's ghost in question was based on a real person, Confederate cavalry general James Ewell Brown ("Jeb") Stuart, who was known both for being a gifted strategist and for wearing a cape and a gigantic ostrich feather in his hat. And in the DC Universe, after fighting for the cause of slavery, he has to work off his karmic debt by helping his descendant blow up Nazis. Like I said: Genius.

Especially when you look at the covers the legendary Joe Kubert provided for the Haunted Tank's adventures in the pages of G.I. Combat. My personal favorite, for reasons that are probably going to be obvious, is the one where they fight an enemy tank by straight up ramping off a cliff, Hazzard county style: 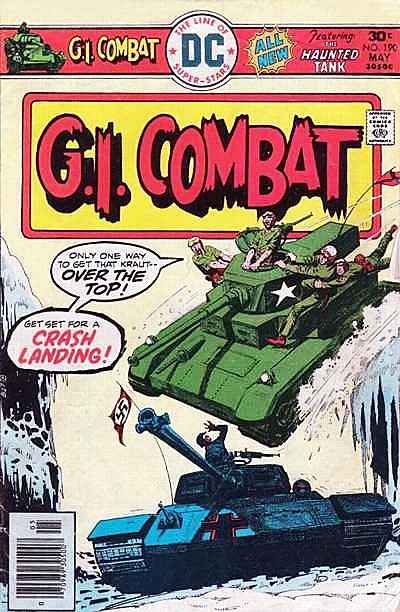 You can't really tell there, but on the actual cover, the Nazi tank commander's eyes are bugging out like Daffy Duck. It's great.

And yes: That was the second Dukes of Hazzard reference I've managed to drop in this column. The question now isn't if I'll hit the trifecta, but when. 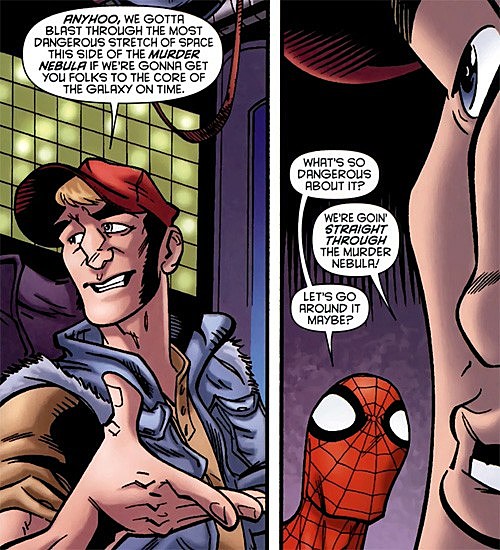 As the record will clearly show, I love the hell out of U.S. Ace, the modern-age name for Marvel's underrated classic U.S.1 -- but unlike the other characters on this list, his region of origin isn't ever clearly referenced as being the South. That said, let's be real here: This is a trucker who has a metal plate in his head that gives him the ability to mentally control his big rig in comics' first and only example of teletruckinesis. So basically, he's Marvel's version of Jerry Reed's character in Smokey and the Bandit, and that was the Southernest movie since Birth of a Nation.

Plus, how can anyone doubt a dude so Southern that he made Doctor Doom say "mess o' biscuits?" 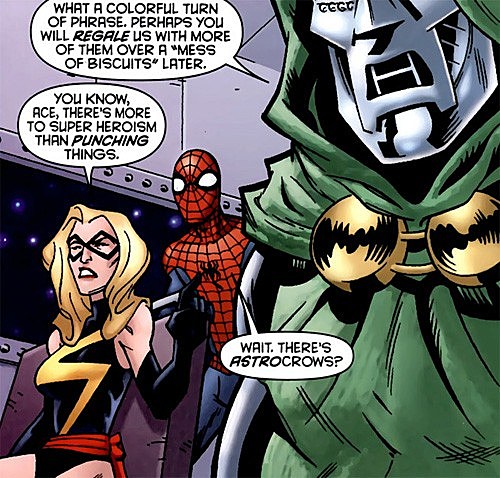 How Ace is not featured in comics every single month is a mystery I will never understand. But for the record, I am available to write it. 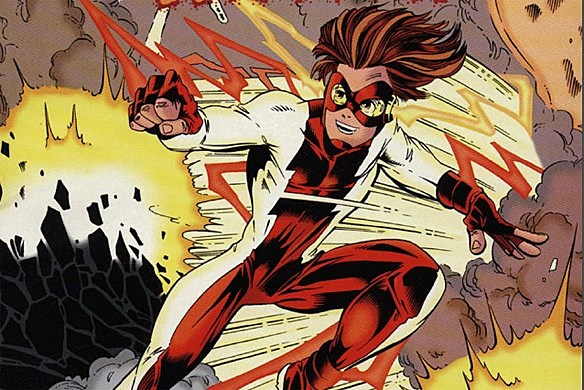 Back before he was Kid Flash, Bart Allen was Impulse, the resident super-speedster of Manchester, Alabama. Now admittedly, he wasn't actually from there, since he moved there when he was five years old -- after his uncontrollable super-speed led him to age to an apparent fifteen -- making him what would properly be termed a time-traveling carpetbagger. But since that's the same age I was when I moved here, I'm counting it.

Besides, his time in Manchester under Mark Waid and Humberto Ramos was unquestionably the high point of Bart Allen's super-heroic career, right down to one of my absolute favorite single issues of all time, Impulse #3, in which Bart got in a fight with his entire school. 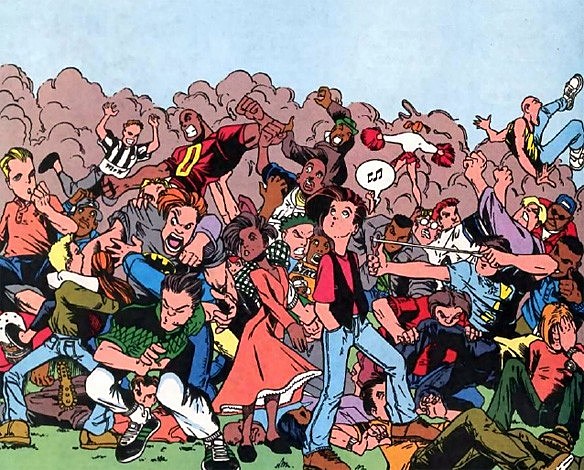 That girl in the dress cold slapping the kid in the Adidas is the best, you guys. The best.

And finally, my top Southern hero... 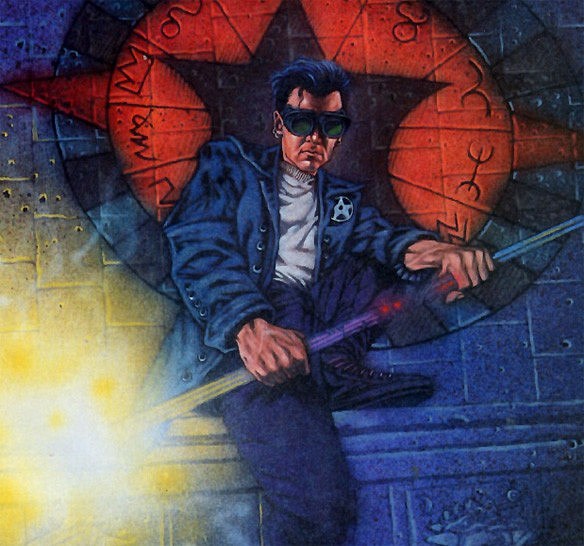 Now, hold on, I know what you're saying: "Jack Knight? Starman? That guy's not from the South!" But here's the thing: While Opal City's actual location is never mentioned in the comic - just like Gotham, Metropolis, Keystone and so on -- a book published for the DC Universe roleplaying game, released as an official source, had a map that dropped the Opal right here in South Carolina, down around Charleston.

Presumably, this was done to reconcile the fact that Opal is surrounded by farmland but has a strong history of pirates, as Charleston and Savannah, Georgia are both steeped in all kinds of piracy that dates back to the 1600s. That said, it is slightly problematic. For one thing, I'm pretty sure that the Palmetto State doesn't feature a single sprawling Art Deco metropolis, and for another, as someone who's lived here for a mere 23 years, it's hard to believe that the Shade would pick this place as the spot to live out the rest of his immortal days, no matter how good the barbecue is.

But it more than makes up for those problems by improving the series immeasurably. It's a great read as it is, but trust me on this one: Jack Knight's dialogue is way, way better if you read it with a thick Southern accent. Here, try it out on my favorite line from the entire series: 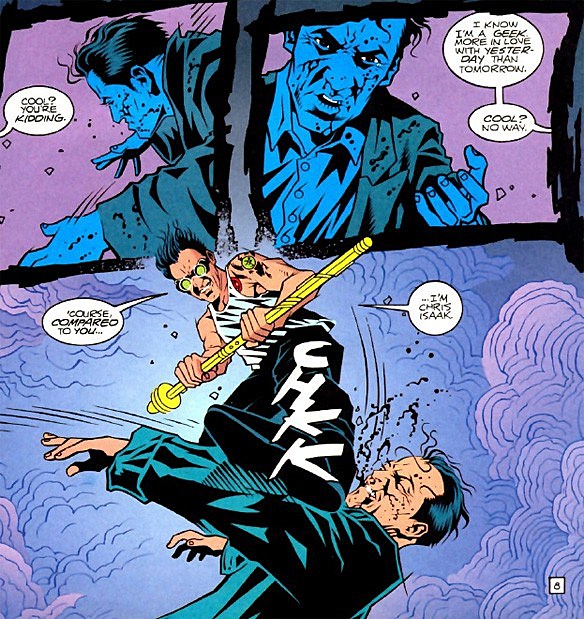 See? The only way that gets better is if he'd said "Compared to you, I'm Hank Williams Jr.!"

So there you go: My favorite Southern super-heroes. And before anyone says it, no, I did not "forget" Jonah Hex. Sure, he's Southern as the day is long, but he's also not a super-hero. You could say the same about the crew of the Haunted Tank, but while scarred-up cowboy is a thing that could (and did) actually happen, a haint on treads is something you only get out of the DC Universe.

And now, a few quick ones:

Q: What would you rather fight (and probably lose to): a zombie dinosaur, or a were-Cloverfield? -- @nicholasreed

A: First of all, I'm a little upset by your insinuation that I couldn't beat a zombie dinosaur in a fight. I mean, I couldn't, but it's not polite to call me out for it in public.

Anyway, while I haven't seen Cloverfield, I am informed by the Internet that it's about some giant monster who menaces a gang of insufferable youths. But the fact that it's a were-Cloverfield means that it's only a giant monster sometimes, and the rest of the time it's just some guy who doesn't know why he's waking up on top of a pile of rubble, right? So yeah, I'd fight that guy, right as he was waking up. You may call it cheating, but me and Batman call it winning.

A: I re-read a big chunk of it not too long ago and while there are parts of it that fall into the "woefully dated" category, like the three stories in a row where Magneto, Dr. Doom and Dracula all decide not to kill the X-Men because Storm is really hot (seriously, they're all in the third Essential) most of it it really does hold up really well. That said, I could live quite happily without ever again seeing the phrase "no quarter asked -- and none given!"

Q: What steps would you take to market your indie comic? -- @JoeyG

A: My indie comic? You mean my webcomic, Awesome Hospital, created by me, Chad Bowers, Matt Digges and Josh Krach, which updates every Tuesday and Thursday with the continuing story of the world's most radical medicine? Well, I'd probably try to get a job writing for America's most popular comics website and then slip in a shameless plug when I thought my editors wouldn't notice.

Filed Under: Dukes of Hazzard, DukesOfHazzard, Haunted Tank, HauntedTank, Impulse, Resurrection Man, ResurrectionMan, starman, The South, TheSouth, US Ace, UsAce
Categories: Ask Chris, Opinion
Comments
Leave A Comment
Fantastic Five: Best War Heroes
Cast Party: Who Should Star in a ‘Starman’ Movie?
Ask Chris #296: Starman And The Challenge Of Holding Up
The Replacements: Celebrating LGBTQ Legacy Characters
Best Cosplay Ever (This Week): Robin, Starfire, Mojo Jojo, Rey, Speedy And More
The Master Collaborator: A Birthday Tribute To Mark Waid
Forgotten 15: The Lost Launch Titles Of The New 52
On The Cheap: DC’s Back To School Sale Has The Best Of Batman, Superman And More
Ask Chris #222: This City Hates You