Q: Has there ever been a Punisher toy line? If not, what kind of vehicles or Punisher toys could you come up with? -- @Protoculture27

A: Back when I was still buying action figures that weren't Destro, I always kept an eye out for Punisher figures, but unfortunately, he's never been able to carry a full line of toys himself. And really, I can see why: You might be able to get a few variations out of Frank Castle himself, the rest of the line would pretty much consist of Microchip, Jigsaw, and maybe an "army builder" box full of dead mobsters that you could pile up around him. That's about as far as you could go with it. There just aren't enough recurring characters to fill out an entire line.

Of course, there's also the fact that the Punisher is a guy who straight up murders people all the time, and that can be a difficult sell to parents out doing their Christmas shopping. 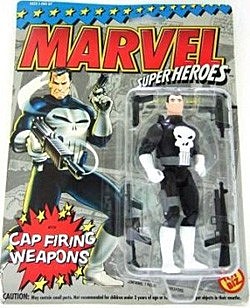 Of course, that doesn't mean that there haven't been any Punisher figures. There are plenty, mostly because the Punisher hit the high point of his popularity during a time when Marvel Comics was owned by a toy company, and as we all learned from America's daring, highly trained Special Missions Force nothing quite appeals to the kids like an action figure of a guy who comes with his weight in guns, especially if they actually fire!

That's the thing about Punisher figures : As much as I love the character he is the last person that should ever be made into a toy for children. The best thing you can say about him is that he fights bad guys, but even at his absolute best, he's a guy who does nothing but kill other people, and he does it constantly, because he hates them. It is completely insane that someone would make a toy of that, but they did, and the fact that these exist will never stop being hilarious.

I never had the one with the caps, but I did get the second version from the Marvel Super-Heroes line, which came with truly awful brown plastic "trenchcoat." As much as I'm not really a toy guy, I love this line, if only because some of the accessories they had to come up with for these figures are just bizarre. The Invisible Woman, for instance, comes with exactly the sort of things you'd expect: an "invisible" (read: clear plastic) catapult and a frisbee with the Fantastic Four logo on it. That's what her powers are, right? Catapulting and super-frisbiing? Sounds about right to me.

I almost think that the Punisher was included solely because he's the easiest character to make accessories for. Just throw a handful of guns in there and get back to figuring out how to represent Starfox's power of super-seduction in action figure form (Hint: Make him smell like bread).

I'm also pretty partial to the more recent figure from the Marvel Universe: 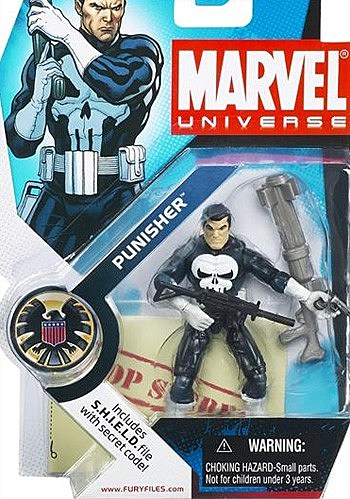 For one thing, while he doesn't quite have the articulation of a G.I. Joe figure, he is in the same 3.75" scale, and you best believe that means I had him hanging off the side of the A.W.E. Striker, blasting away Cobra troopers and reminiscing about his time in Vietnam with Stalker and Snake-Eyes.

Much like the original figure, the best thing about this one is the accessories, specifically that big silver thing. I have no idea what it's actually supposed to be, but it looks enough like a bazooka that you can use this figure to re-create one of Frank Castle's most ridiculous moments, the cover to Punisher #1: 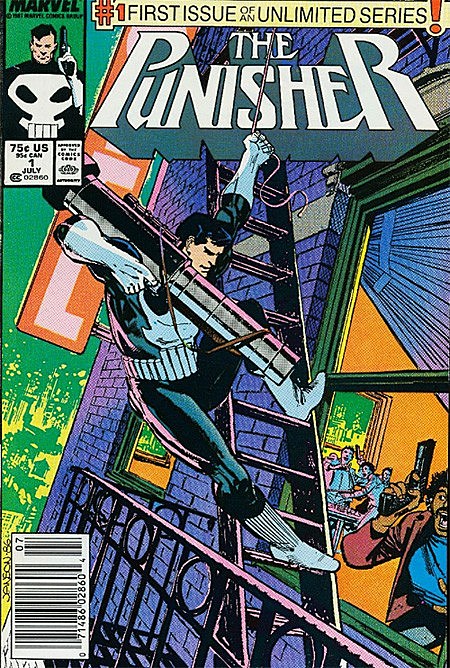 That thing cracks me up every time I see it. He is about to shoot that dude from two feet away with a high explosive,while hanging one handed from a rope, even though he is already standing on a fire escape. How exactly is this supposed to work? I'll tell you how: Awesomely.

Anyway, as crazy as their very existence might be, the regular Punisher action figures have nothing on the sheer hilarity of the Super Hero Squad versions: 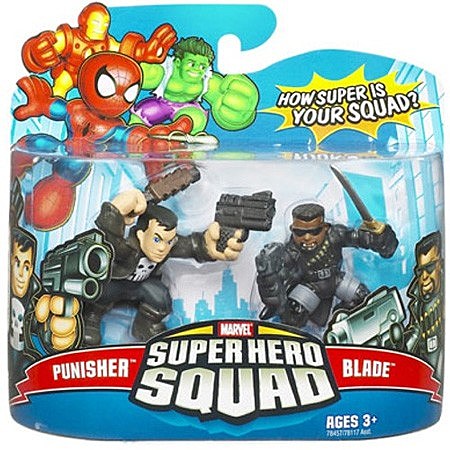 That is literally a toy of a guy who does nothing but kill people, to the point where he has a pistol and a shotgun attached to his hands -- and who, from the look of it, is based specifically on the extremely violent Garth Ennis MAX run, which featured him killing a man by cutting out his intestines and stringing them up like Christmas lights, and it is for three year-olds.

And as an added bonus, he's packaged with a character best known for starring in movies with lines like "always some motherf***er trying to ice skate uphill." They might be the best toys ever created.

There are a couple of other Super Hero Squad Punisher figures, too. The first one has the bazooka and comes with a chain-wielding Ghost Rider, just in case your toddler is feeling nostalgic for 1992. And then there's the second, which is based on a costume that Frank wore in five issues that saw him swearing to shoot a neo-Nazi in the face. No, really. 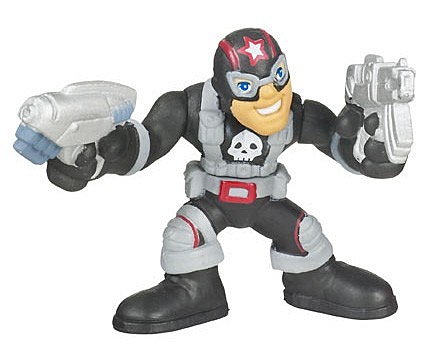 And he is happy as hell about killing crooks.

My favorite Punisher toy, though, is one that I didn't even know existed until recently, when I was talking it over with CA editor Caleb Goellner: The Punisher's Battle Van. 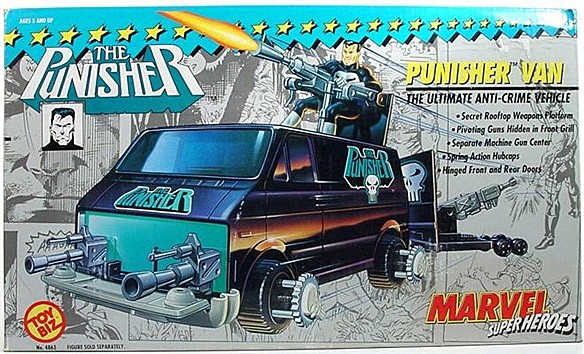 There are so many amazing things that I don't even know where to begin, but the fact that this toy that asks you to believe that the Punisher would be driving around in a van with his own logo airbrushed on the side is pretty fantastic all by itself. That's not even sarcasm -- this dude had t-shirts printed up with his logo on them so that everyone would know who was about to kil them. I have no trouble at all picturing Frank patiently explaining that no, he doesn't want a wizard riding a dragon across the moon, and yes, it's just the skull, thank you.

But the absolute best piece... It's sort of hard to make them out in the picture above, but if you look closely at the wheels, you can see that HE HAS RIMS WITH HIS OWN LOGO ON THEM. THAT IS THE MOST BALLEREST THING OF ALL TIME.

The only thing that isn't great about those is that I cannot put them on my car. Marvel. For real. Stop whatever you're doing and get someone on licensing a set of Skull Spinnaz right now.

Still, all of those figures are part of other lines. If, however, I was put in charge of coming up with ideas for one based solely on the Punisher himself, I'd probably focus on doing playsets rather than just figures. After all, while the Punisher himself has remained pretty constant over the years, putting him into different environments and situations is exactly what makes those storeis so fun.

For starters, I'd want to have one based on one of my all-time favorites, Punisher War Journal #19, the comic that features one of the greatest cover blurbs of all time. Obviously, the set would come with a jet-ski that could be kissed goodbye, Frank's rental deposit and an improbably huge gun, along with a Punisher figure that'd be unqiue to the set, based on the outfit Jim Lee had him rocking at the time: 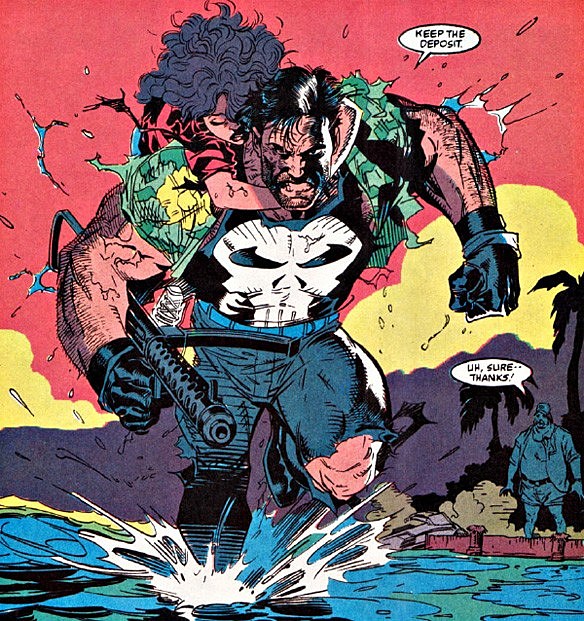 Seriously, who wouldn't want to remember that time that the Punisher wore a Hawaiian shirt over his costume for a more festive look?

The one I'd really want to do, though, would be a Central Park Zoo playset based on the scene from Welcome Back Frank, full of different traps and action features that you could spring on the bad guys as they chased Battle Damaged The Punisher™ through the exhibits. And as the centerpiece? 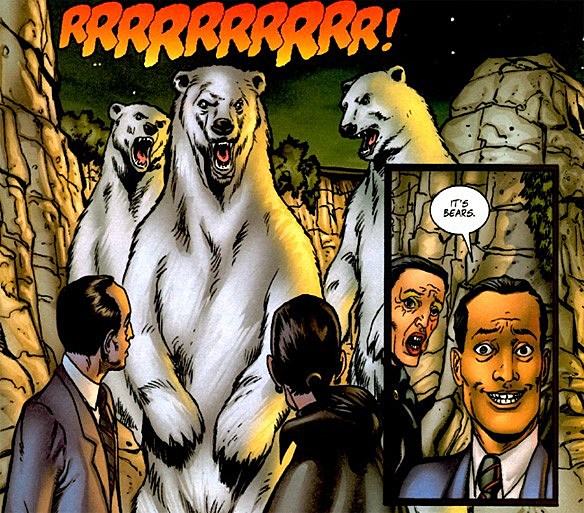 It might seem pretty gruesome, but let's be real here: If you're already making a toy of the Punisher, there's really no reason not to go all out by throwing in some angry animals that maul an old lady.