Q: Which of the two Batman/Punisher crossovers do you find most delicious? -- @glunders

A: I'm not sure that "delicious" is an adjective I've ever used to describe comics that weren't printed on Fruit Roll-Ups, but I'm going to make a judgment call on this one and answer this one without tearing them in half and making peanut butter and Punisher sandwiches. 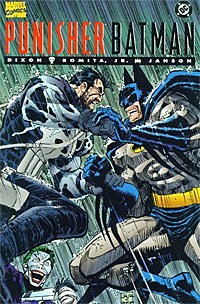 Anyway, as much as I love the characters on their own, the two Batman/Punisher comics from the '90s are pretty awful. They just don't work at all, mainly because these are two characters that can never reach their logical end with each other. Batman can't beat up the Punisher and throw him in Arkham, and the Punisher can't shoot Batman, and they can't even come to an easy alliance that creates a long-running tension (like the Punisher and Daredevil), because after about 48 pages, they both go back to a universe where the other doesn't exist. So they just sort of hang out together and glare at each other for a while and occasionally one throws a punch at the other. It just doesn't work.

So of course, much like many ideas that didn't work, it happened twice in 1994, in a pair of prestige format comics that told one big story, but with each part by completely different creative teams: Lake of Fire, by Denny O'Neil, Barry Kitson and James Pascoe, and Deadly Knights, by Chuck Dixon, John Romita Jr., and Klaus Janson. Neither one's good, but as to which one's better, well, let's have a look.

Lake of Fire kicks off with the Punisher on the trail of his old enemy, Jigsaw, who has apparently escaped to Gotham City with plans to use stolen rocket fuel to set the water supply on fire. I wish I could say that this was the dumbest thing about this comic, but that's just where it starts.

Jigsaw has apparently been in Gotham long enough to start forging a criminal empire -- I think they offer tax breaks for it in that city -- and through an increasingly convoluted series of false clues, he's able to lure the Punisher into a church, where he's taken out by a fake nun who splashes him with poisoned holy water. Then, for reasons I can't even begin to understand, Jigsaw decides to set the church on fire. Fortunately for Frank (but no so much for the readers), he's rescued by Batman. 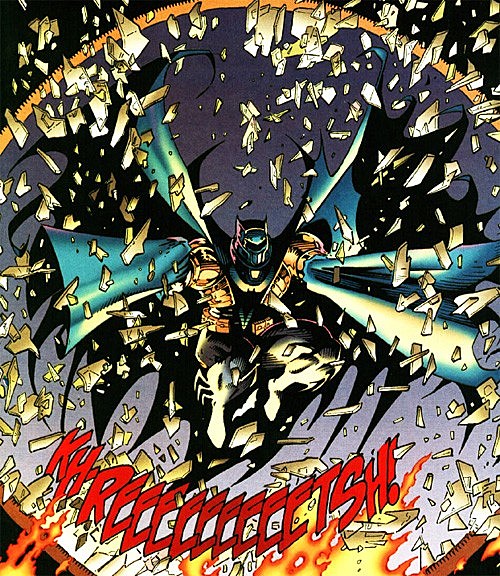 That's right, everybody: We are in Azbats territory. For those of you who don't know, this is Jean-Paul Valley, also known as Azrael, who briefly took over the role of Batman after the events of Knightfall. And he is terrible.

"Batman" and the Punisher realize that they need to work together to keep Jigsaw and his pals from setting all the water on fire, so they decide to pool their resources and investigate things for themselves. Which they do by heading straight to the bathhouse. No, really. 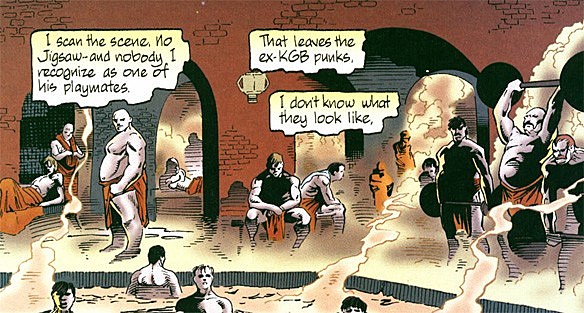 The captions in this part are hilariously defensive, especially when you consider that they're meant to be the internal monologue that Frank Castle will later commit to his diary war journal. "We can barely see the Russians through the steam," he says, before quickly tacking on "but we aren't admiring them, just punching them out." Sure, Frank. Whatever you feel like you need to tell Micro when you get back to the Battle Van.

After that, the Joker shows up and the Punisher completely fails to kill Jigsaw, which wouldn't be all that notable except that in the captions, he's criticizing his own actions while he is doing them. He talks about how he should just shoot him, while not shooting him, and how he shouldn't waste time watching himself bleed, while doing that very thing. He even goes so far as to immediately follow dialogue with a caption about the thing he just said is dumb.

Even this comic doesn't like this comic. And for good reason; it's awful.

The sequel, however, is actually worth checking out if you ever stumble across it. It's not what you'd call "good," but it has the distinction of being the only time in his career thus far that John Romita Jr. drew a comic with Batman and the Joker:

If that's not delicious, then I don't know what is.

A: You know, I honestly never expected to get one question that I'd have to reference Punisher/Batman: Deadly Knights to answer, and yet here I am with two.

As I said above, it's nowhere near being a great comic, but to his credit, Chuck Dixon -- who had long runs writing both characters -- manages to pull off one pretty awesome scene. As you might expect, the Punisher tries to kill the Joker, which I'm pretty sure would actually count as community service. Batman stops him and tells the Joker to run for his life, and the Punisher, about as frustrated as the readers by this point, hauls off and punches Batman in the face.

If that sounds absolutely terrible, it's because it is. But then this happens: 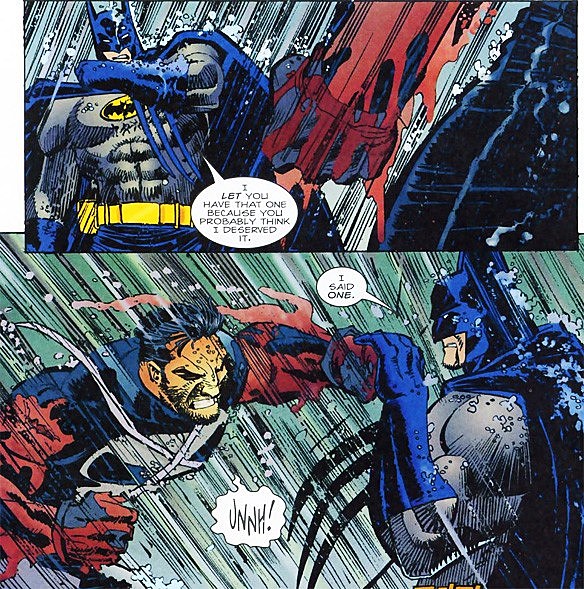 Seriously, it cracks me up every time I read it, which is probably way more often than anyone actually should. The first panel alone, with Batman's "I let you have that one" is such a schoolyard move, to the point where it might as well have been followed up with "What? No, I'm not crying. It's just... it's just raining really hard on my mask. Shut up."

The second panel, though, where Frank actually goes for it and Batman just cold shuts him down? Classic.

Q: Why aren't Wolverine's teeth covered in adamantium, if every other bone is covered? -- Nicole, via email

A: Believe it or not, this is something that I've actually thought about quite a bit, thanks to the fact that the comic book store I used to go to when I was a kid was a hole in the wall that never changed the "hot" comics they had on display behind the counter. As a result, every time I went in, I found myself looking at the chromium enhanced cover to What If #50. 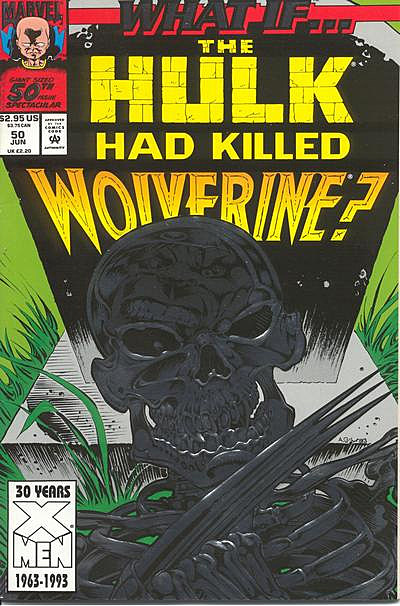 I never actually read the comic, but since they had that thing on display for the better part of a decade, it was etched pretty thoroughly into my memory, along with the fact that even Wolverine's teeth were meant to be metal.

Now, I realize that since this is an issue of What If, its made-up stories about imaginary Canadian berserker samurai might not be as accurate as other made-up stories about imaginary Canadian berseker samurai, but for the sake of argument, let's go with it. If this is an accurate depiction, it means that Wolverine does have Adamantium teeth -- or more accurately, that he used to.

Given what we know about Wolverine's lifestyle, it's pretty easy to figure out what happened: 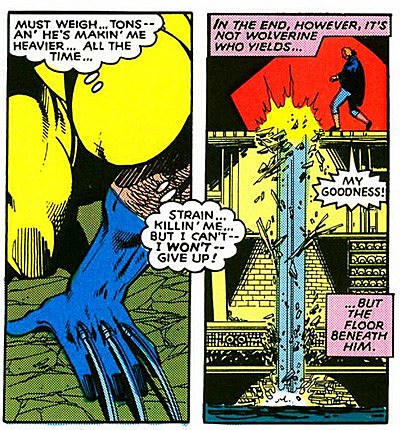 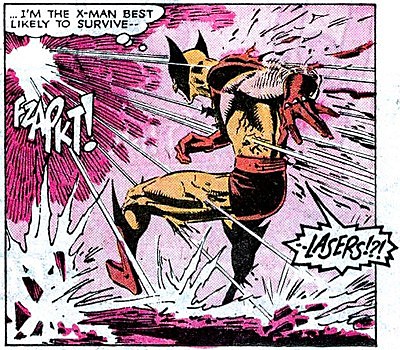 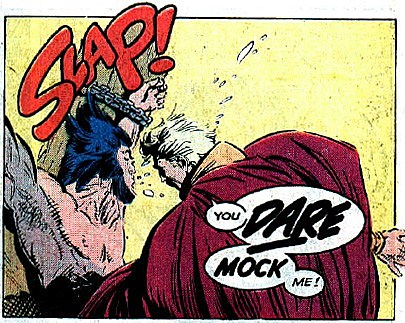 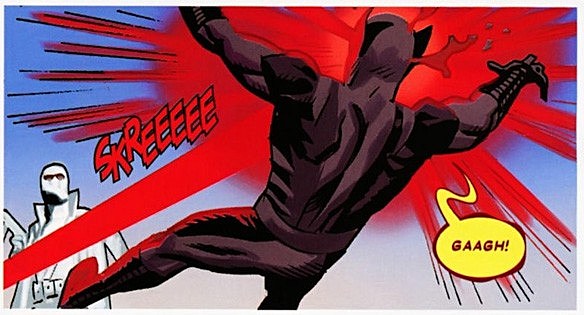 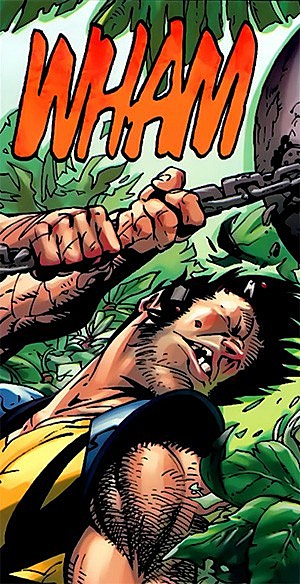 Even Adamantium teeth can get knocked out if you hit 'em hard enough -- like, say, with a wrecking ball. Thanks to his mutant healing factor, he just grows new ones, but since the Adamantium isn't a natural part of his body, he just gets regular teeth. Meanwhile, there are presumably 32 Adamantium teeth just floating around the Marvel Universe wherever they were knocked out, just waiting to be gathered together and reforged into the ultimate grill.

Filed Under: Batman, Dentistry, Punisher, wolverine
Categories: Ask Chris, Opinion
Comments
Leave A Comment
Every DC Comics Movie, Ranked From Worst to Best
Ben Affleck’s Batman Is Back in New ‘Flash’ Set Photos
Hugh Jackman Hints at Possible Return as Wolverine
Batman, Catwoman Sex Scene Removed from HBO’s ‘Harley Quinn’ Animated Series
The Live-Action ‘Nightwing’ Movie Is Not Dead Yet
Dave Bautista Pitched Warner Bros. to Let Him Play Bane
DC Is Making a Comic-Book Sequel to ‘Batman ’89’
Viggo Mortensen Reveals Why He Turned Down the Role of Wolverine
The Man Third In Line For President Has Been In Five ‘Batman’ Movies