A: Out of all the questions I got this week, this was the only one that combined two of the things I love most in this world: The Punisher, and oddly specific but ultimately insignificant dollar amounts. Clearly, you brought this question to the right place.Under normal circumstances, I'd say you got your money's worth just by virtue of getting ten comics for less than a buck, but these in particular are a special case. Mike Baron's run on Punisher had always been about putting Frank Castle into almost-believable situations that had been ripped from the headlines (or at least his local video store in the case of the stories that were pretty directly inspired by Class of 1984), but that last year is all over the map in terms of quality.

Fortunately for you, I'm both a guy who's read every Punisher comic and someone who essentially sits around reading comic books for a living. As a result, I've developed a complex rubric for determining the actual worth of comic books that's way more accurate than any printed price guide could ever hope to be. The way I see it, we can look back over the issues you picked up and determine whether I'd pay to read them again, or if I'd actually have to charge for the hassle of slogging through 'em. At the end of it, if the bill comes out to less than eighty cents, then you've made a bad deal. 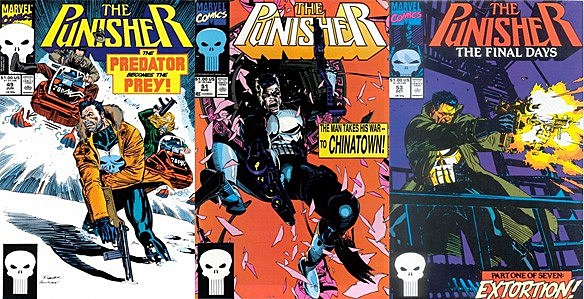 For starters, we can go ahead and throw #48, 51, and 53 right out of the running. The first two aren't necessarily bad, but they're about as generic as you can get with Punisher stories. They both operate on the premise of just putting the Punisher into different locations -- a snowstorm and Chinatown, respectively -- and then seeing how that works out for 22 pages. Here's a hint: Frank kills everyone else in the book, because he's the one who gets to come back next month.

#53 has a little more going for it, but it's also the first part of the seven-part "Final Days" story, in which Frank gets his face cut up by Jigsaw in prison and then gets stitched back together by a heroin-addicted prostitute who used to be a brilliant surgeon who experimented with using melanin in her procedures, thus leading to the issues where the Punisher's skin was dyed black and he teamed up with Luke Cage in Chicago. 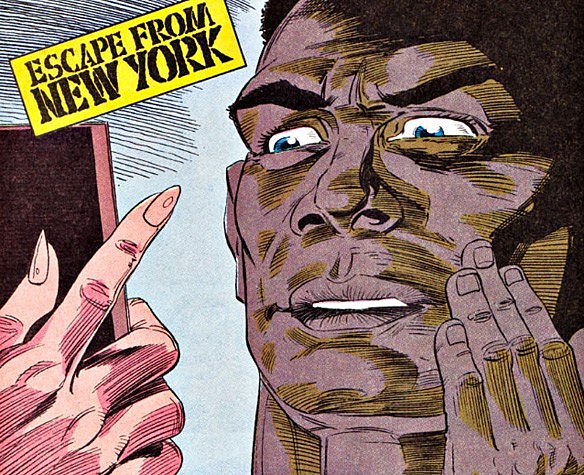 Now those issues are definitely your eighty cents, but without the rest of the story, there's no real reason to jump into the first part.

With those knocked out, we can start in with #44, and I hate to break this to you pal, but we are off to a pretty bad start. This one focuses on what was then the hot news item that was flag-burning, and it's probably the single weakest issue of Baron's otherwise pretty solid run. If nothing else, it has not aged well, probably because it's about Frank teaming up with a rapper named Arc Light to fight a bunch of rednecks who are mad at him for burning a flag as part of his act, and includes a lengthy sequence where the Punisher talks about how this newfangled "rap" isn't music. 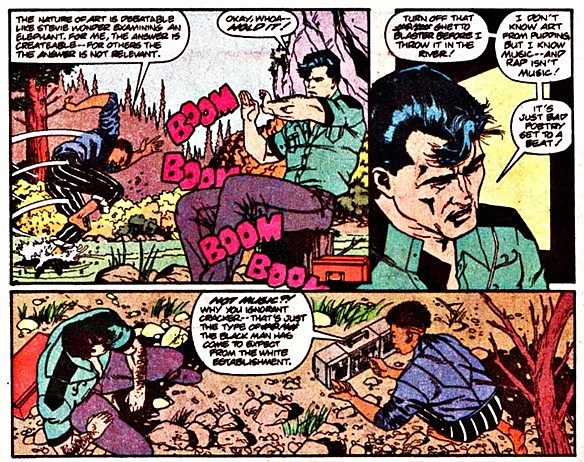 48 Hours, this thing ain't. That's gonna knock a few buck off the total right there, and it only gets worse when Frank starts explaining why he's not racist:

Baron's run is full of some pretty great dry humor -- he often finishes up panels on these weird anti-punchlines that are occasionally downright bizarre -- but that particular gag falls pretty flat on its face. I'd want five bucks for getting through that thing again.

Sadly, #45 isn't a whole lot better, though it does have one of the greatest cover gags in Punisher history: 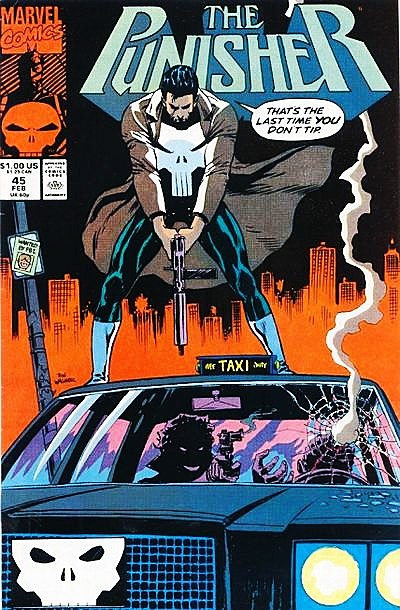 The premise of this one is that there's someone killing cabbies, so the Punisher has Microchip trick out a taxi so that he can go undercover. It's a neat idea, especially when the Punisher gets into a high speed chase with this pickup truck full of crooks who have no idea why this super-taxi is trying to murder them. Unfortunately, the whole thing turns into the story of a woman who's killing cabbies for revenge because she had to walk home one night and got raped, and it is rough.

Even with the good cover, it'd take at least a couple bucks before I'd read it.

Things are not looking so good for your financial acumen right now, but don't fret, because this next story is where things start to pick up again. First of all, it's got the insanely over-the-top cover blurb "IT WAS FROZEN IN THE PAST. IF IT THAWS, THERE'LL BE NO FUTURE!" and I'd drop four bits just to find out what the hell that's all about.

Then, it turns out that it's about the Punisher stealing an airplane that crashed into a glacier while it was carrying the prototype of a Nazi particle beam. 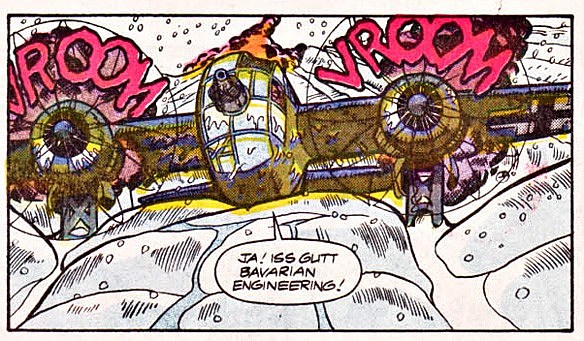 That's the thing about '80s Punisher. With the Garth Ennis era of the 2000s, Frank Castle's focus was narrowed back to his war on organized crime, but back then he was basically a globetrotting adventurer who went anywhere that he thought someone might need killing. The character was much more influenced by Men's Adventure Novel characters like Mack Bolan, and this is a prime example.

It's definitely worth a buck, maybe a little more for the Punisher blasting Nazis with a particle beam and the truly hilarious fact that Baron left the door open for a sequel by mentioning a second plane rigged up the same way in the last panel.

You're still in the hole, but things are looking up, because these next two issues are one of my favorite parts of the entire run. Any creator can take the Punisher himself to the extreme, but Baron and Hugh Haynes take the actual concept of a gun over the top by having the Punisher fight a Middle Eastern country with a cannon that's 40 meters long. 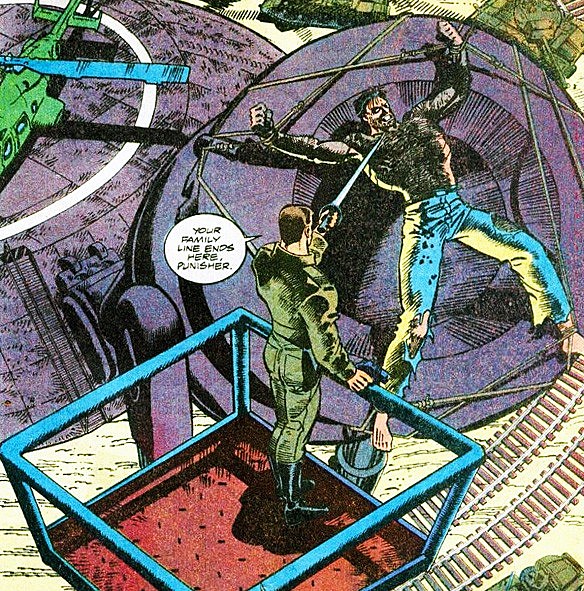 That was not a typo. He fights the entire country.

Seriously, this thing is awesome. It's the closest comics have ever gotten to that feeling of finding a fuzzy VHS tape of the greatest straight-to-video action movie ever made, and it just keeps getting crazier as it goes on. Every twist takes it to new heights, like how the guy running the gun is the same dude that killed Frank's last remaining relatives in a previous story. Frank eventually frees himself from the giant cannon with the help of his "diamond manicure" -- a set of super-sharp fake fingernails that have been abandoned in recent years, though I can't imagine why -- and then decides that he can't very well run around killing people without a giant skull on his chest.

So of course he just does the sensible thing and greases up for combat. 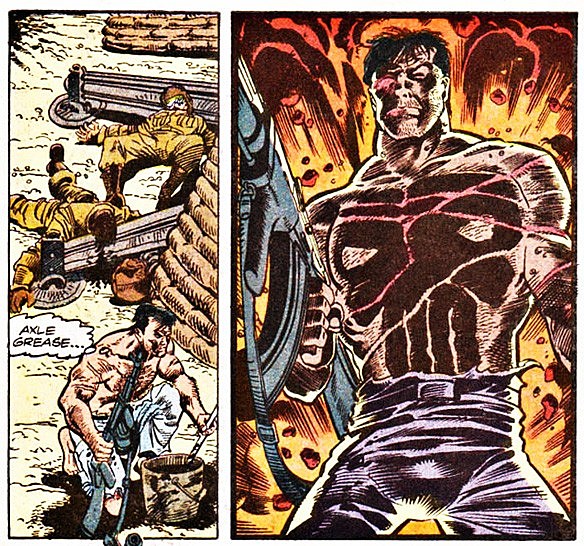 How in the hell have there been three live-action Punisher movies and none of them have included this scene? And incidentally, I have no idea what's supposed to be exploding in that second panel. Presumably the Punisher's skill at greasing his chest was just so overwhelming that things spontaneously combusted.

These are easily two of the most enjoyable Punisher comics of the era, and they'd be a bargain at two bucks each.

Let's skip ahead a bit to #52. Once again, we have a pretty phenomenal cover, this time by Mike Harris and Rodney Ramos: 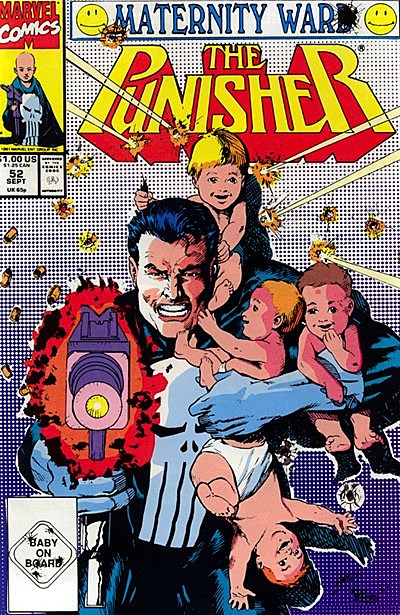 Those babies crack me up every time I see this comic, especially the one that Frank's just dangling by the foot while he shoots at somebody. He's just so darn happy.

Unfortunately, the story doesn't really live up to the promise of the cover, but here's the thing: It should. This is, after all, the story of the Punisher fighting a woman who is not only kidnapping babies to sell to rich people, but who is also a former luchador. 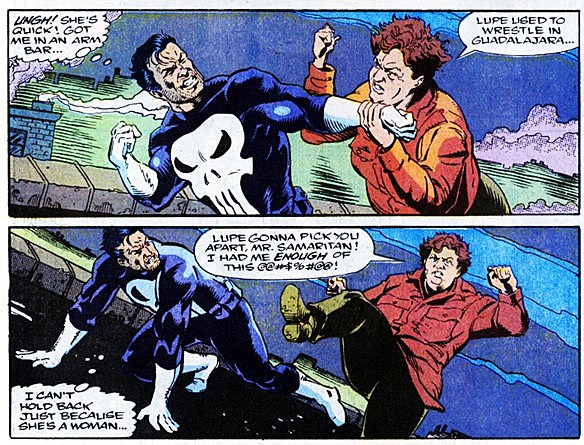 I have been waiting my entire life to see Frank Castle hulk up and power out of a Fujiwara armbar, but it just doesn't work in this issue, and the fact that Lupe speaks with an accent that even Chris Claremont would think goes a little too far doesn't really help matters either.

It's not quite as bad as the flag-burning issue, but it'd take about a buck for me to get past that hilarious baby on the cover.

All right. We are down to the wire here, and you're still in the red. There's only one thing that can help you now: The double-sized Punisher #50.

And this is a comic where Frank Castle invades Biosphere-2 to kill an evil scientist/architect who uses a deadly buzzsaw yo-yo to murder his underlings. 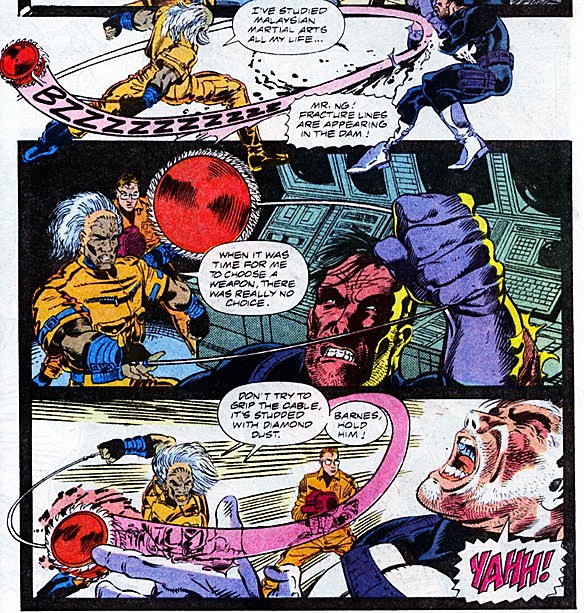 Throw in the fact the Punisher kills this dude by snapping his knee and then leaving him to drown when a nearby dam bursts, and that the last page includes a line about how this didn't result in any innocent people being killed "thanks to the Emergency Broadcast System," and you're looking at a comic that's giving you at least $3.60 worth of enjoyment.

So there you go, Jeff: Actual, mathematical proof that your eighty cents were well spent. The numbers don't lie, and now you can rest easy knowing that you got more enjoyment out of these comics than the one (1) crunchy taco that you could've bought instead.