Q: Can Batman have a happy ending or is he always doomed to be the old man in Dark Knight Returns and Batman Beyond? -- @tjones0982

A: I guess that depends on whether your concept of a "happy ending" includes punching the Riddler right in the face. Spoiler Warning: Mine does. 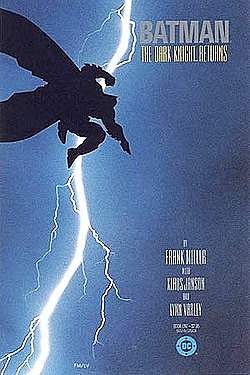 I don't think I'm blowing anyone's mind here when I say that wanting to see how a story ends is a pretty natural impulse. A story without an ending feels incomplete, even when, like superhero comics, it's the kind of story that's never really meant to end. When you get right down to it, the entire purpose of a superhero comic is to continue being published indefinitely so that its creators (or, if we're being a little more honest about it, its parent company) can continue making money. Jonathan Hickman mentioned a while back that superhero comics are always second acts, and he's right -- with as much as a story structure demands closure, there always has to be enough left unresolved that we can have another story next month.

Still, that impulse is there, and it always has been. We have stories about how Hercules, Robin Hood and King Arthur end -- more on that last one in a second -- and superheroes like Batman aren't really all that different. The thing is, because they're being wedged into stories that aren't designed to have them, those endings don't always work that well.

Don't get me wrong, Dark Knight Returns is a great comic, but like I mentioned in last week's column, those stories from the late '80s that tried to edge toward it as an "official" future -- of which "Death in the Family" and "The Cult" were probably the most memorable -- were way worse off because of it, and the same goes for the stories ten years later that did the same with Kingdom Come. There are exceptions, of course; Scott Snyder and Francesco Francavilla tying Jim Gordon Jr. from Year One in to the rise of the Mutant Gang in DKR in "The Black Mirror" was awesome, but it was also subtle enough that it wasn't the entire focus of the story.

The thing about those stories, though -- and Batman Beyond, since you brought it up -- is that despite their billing, they're not endings. For all the pretense around them as the Official For Really Real Future, they're just as much a second act as the rest of those comics. Dark Knight Returns ends with Batman out of retirement, going underground to act in secret, recruiting a bunch of impressionable teens to do his bidding: 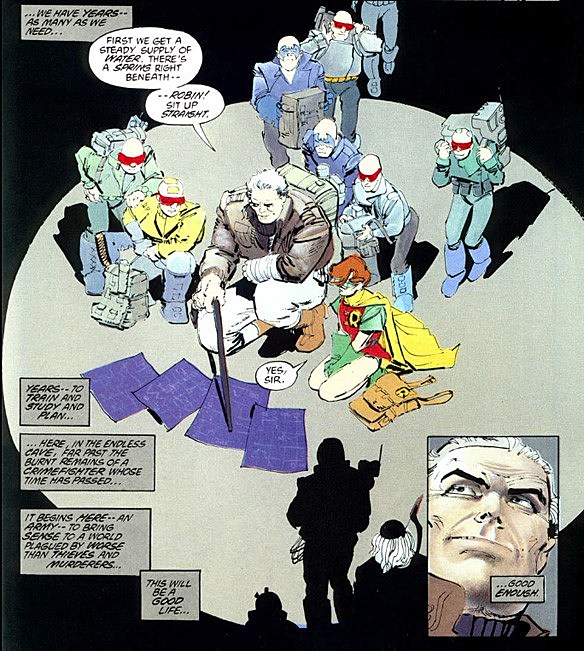 That last line, the contrast of Bruce embracing this new idea of what being Batman means as a life that's good enough with the opening's rejection of a death that never would be is great, but it doesn't close anything. It tells you right there on the last page that Bruce Wayne's story will continue, although as we all know, there was never a sequel to The Dark Knight Returns.

Kingdom Come's the same way, ending with the heroes all coming out of retirement to beat up the '90s and maybe do some other stuff down the line. Even Whatever Happened to the Man of Tomorrow, which shut the door on 50 years of Superman comics in about as resounding a way as it was possible to do, ends with a piece of coal being crushed into a diamond and a wink from a character who knows that nothing in comics ever really ends. In that respect, they all fall in line with how King Arthur's story ends, with the declaration that he's the once and future King. He's only dead for now, and eventually he'll come back and have more adventures, probably with a laser sword version of Excalibur. I think Brian Bolland drew it.

Batman Beyond is a little different, but only because it doesn't have any pretenses of being an ending. It's Terry McGinnis's show, sure, but Bruce never leaves. He's all over that thing. He's just not running around punching out crooks, and while we're on the subject, I love how the show justifies that. That opening, with an older Batman being pushed to a physical limit to the point where has to use a gun, the one thing for which he could never forgive himself, is so well-done: 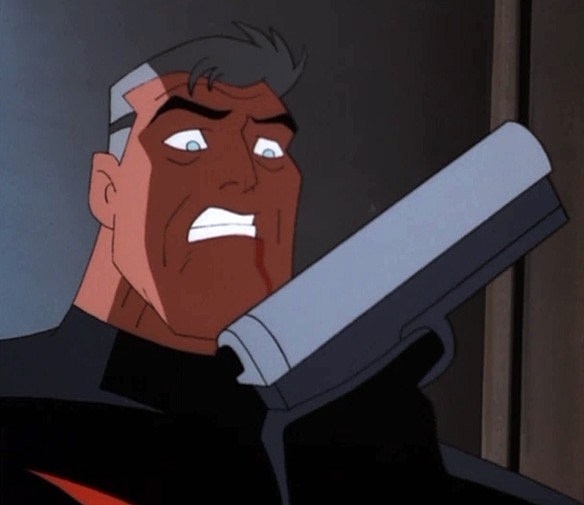 I completely buy his revulsion and disgust at himself, the realization that he can no longer be what he was, and his decision to quit being Batman rather than compromise his moral code. That stuff's great. What I don't buy -- and what, unfortunately, is necessary for the premise of the show -- is that not being Batman would ever stop Bruce Wayne from fighting crime. You can take away his physicality in its entirety and the dude is still the World's Greatest Detective, who, as you might have heard, is somewhat interested in public safety. It's hard to believe that he'd just go sit in a mansion until Peter Parker showed up at some point in the future. It just makes for a much better show if he's out of the picture for a while.

All of which is to say that those Grumpy Endings you bring up both leave the possibility that Batman actually can be happy in his later years -- his much, much later years -- by being continuations of the story rather than actual endings themselves.

Of course, the fact remains that he's a friggin' sourpuss throughout. So do I think that there could be a truly happy ending for Batman? Well, yes and no. To dial back a little -- because what this column needs is another lengthy diversion, I know -- I don't think that Batman needs to be all that crabby in the present.

It's not that I want everything to be the bright and cheery pop art world of the Adam West show [note: this is a lie, I definitely do want everything to be like that forever] but I like a Batman who's not a complete and utter jerk to everyone around him way more than the skulking, sidekick-backhanding loner that he's occasionally been characterized as, like in 90% of his interactions with Superman since the mid '80s. Batman: The Animated Series and its accompanying comics actually did a really good job with this, giving us a Bruce Wayne who seemed genuinely friendly and interested in other people, but who was still undeniably driven and serious about punching out criminals. Those scenes where he'd have casual, friendly conversations with Alfred or Robin, or when he'd roll up to Wayne Enterprises in that hilarious mustard-yellow suit but still turn that growl on when it was time to be Batman did a lot to round out his character in a way that a lot of other versions missed.

Believe it or not, there was a point to all this, because it affects just what it is that we're going to consider a "Happy Ending" for Batman.

Batman is, at the core of the concept, a crimefighter. He's defined by his opposition to crime, particularly murder -- even more particularly, murder by gunshot of parents in an alley, but he'll branch out to poisoned reservoirs if he needs to. So really, the only unambiguously happy ending for Batman can only come once he's done wiping out all crime ever. Now, not to be to cynical or anything, but this is not likely. That's kind of a bummer, I know, but the bright side is that we pretty much get Batman comics in perpetuity.

The logical ending to that is that Batman just fights crime until he dies fighting crime, but that's not exactly "happy," even if you account for how much joy he has to take knocking the Riddler's block off. So the question is, do you adjust the standards? Is it enough for Batman to know that he made things better in Gotham City, that he helped to literally save the entire world on multiple occasions as a member of the Justice League and that, on a personal level, he's had a positive effect on the lives of people around him, like the Robins (okay, some of the Robins)? All of those things are true because they have to be -- if things aren't better with Batman around, then he's a pretty awful superhero and that is a theoretical possibility that this column does not discuss. So is that enough?

Or is he so driven that no matter how much good he's done, it'll never be enough? Will he ever be satisfied if he can't meet that goal of eradicating all evil in Gotham? Would even that be enough if there was still evil elsewhere in the world?

Personally, I come down somewhere in the middle, but a lot closer to the former than the latter. It's not that I don't think he's driven, or that he'll ever be completely satisfied, but it's like I said: Dude's the World's Greatest Detective, and if there's one thing that Gotham City's full of, it's evidence that Batman and Bruce Wayne have made things better. The simple fact that the city's not overrun with glaciers, carnivorous plants, murderous clowns, fear gas, crossword puzzles, ninja assassins and whatever the hell the Penguin's been trying to do all these years is a pretty good sign. Hell, there are even people confident enough to continue opening businesses like the Janus Twins Playing Card Factory And Haberdashery and Priceless Egyptian Cat Statue Museum, so obviously he's doing something right. Is it enough? Probably not, especially for a guy whose concept of realistic expectations allowed him to dress as a bat and run around on gargoyles all night, but that's why he'll keep doing it until he can't, and why he'll find another way to help after that.

Besides, punching the Riddler is its own reward.