A: Oh, son. You have come to the right place. After three years of this column, you're probably already aware that I'm the World's Foremost Batmanologist, but if my studies of the caped crusader have a specific area of emphasis, I can pretty much assure you that "Batman punching animals" is most definitely it.Now, look: Even though I might not be a pet person (with the exception of certain Bulbasaurs), there are very few situations in which I would ever condone violence against an animal in real life. If a bear is about to tear your head off, fine, punch it in the nose like they tell you to on the Discovery Channel. Outside of that, the abuse of an animal, especially a pet, is one of the absolute worst things a person can do. We're all clear on that, right?

Good, because in comics, seeing a superhero punch out an animal is literally one of my all-time favorite things, ever.

From Punisher slugging a polar bear on down, it cracks me up every single time I see it and I have no idea why. It's not like I have some animal trauma in my childhood that I'm working through in comics or anything. I mean, I'm allergic to cats and dogs, but that doesn't really fill me with a desire for revenge as much as it fills me with a desire for Claritin and a box of tissues. I even like going to zoos! But for some reason, whenever Batman has to fight an animal, I get absolutely giddy over it. So you can imagine how thrilled I was when I cracked open Batman #16 and saw the panel you mentioned: 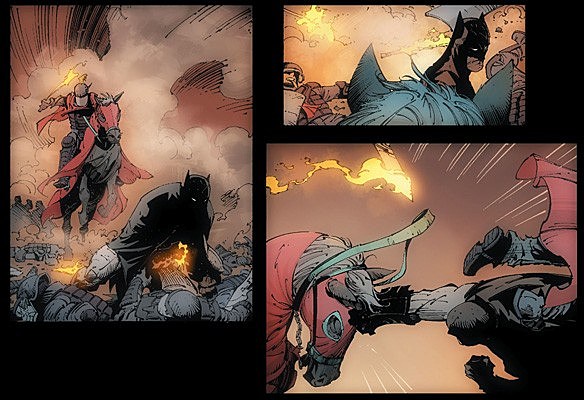 Seriously, not only does Batman stop a charging horse by punching it right in the face, but he hits it so hard that they then become friends and re-enact Frank Frazetta's Death Dealer on the very next page: 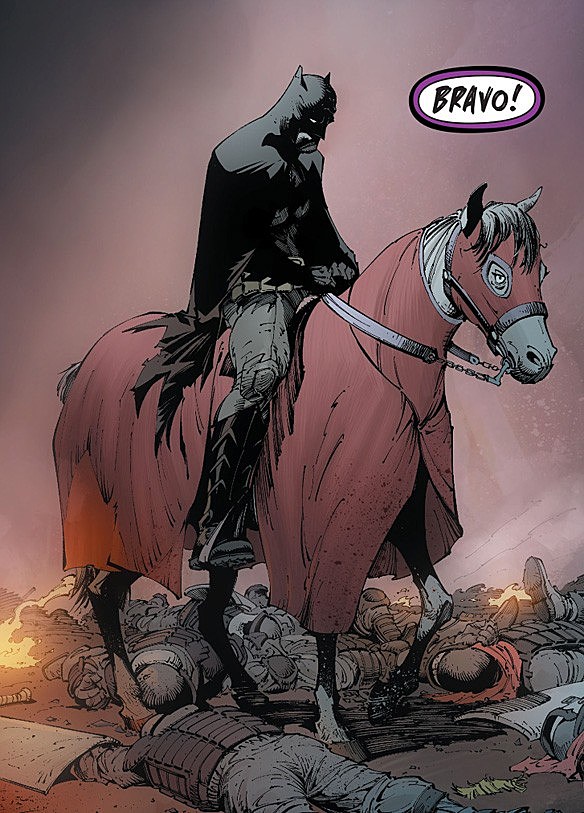 But while this little instance of beast-fightin' is the latest and arguably one of the greatest, it's hardly the first. He's not the all-time champion of punching out fauna (that honor belongs to Conan the Barbarian, who is involved in my single favorite instance of Man vs. Beast Combat in the entirety of fiction), but still. Batman has a long, long history with this sort of thing, to the point where he's been punching animals almost as long as he's been punching criminals. And it makes sense that he would, too.

The fact that Batman's an ordinary human being -- or, you know, a billionaire ninja with a photographic memory, a butler and a robot dinosaur in his basement -- means that most of your more fearsome animals can actually present a viable threat to him. In the DC Universe, that actually makes him pretty unique, especially when you consider that Superman once wore an entire lion as a hat when he was having a bad hair day: 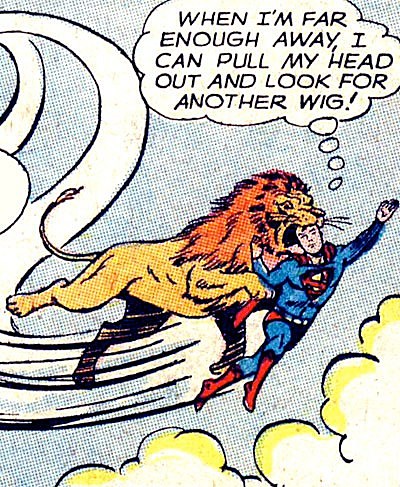 Batman, however, is still part of that grand pulp tradition of heroes who have to solve their lion-related problems with uppercuts.

Plus, the sheer number of thematic villains Batman has to deal with on a daily basis pretty much guarantee that he's going to be dealing with criminal animals (or crimanimals). When you're fighting people with names like "Catwoman" and "The Penguin," it's basically a certainty that you're going to be locked up with a tiger or have to deal with some kind of man-eating waterfowl, and those are just the obvious ones. When it's basically your job to hunt down a lunatic who's obsessed with Alice In Wonderland, you're almost guaranteed to end up running into a giant caterpillar jacked up on PCP in the middle of a poorly tended hedge maze.

All of which is just to say that Batman ends up punching out a lot of critters, and that it's established pretty early on that this is kind of his deal. Bill Finger and Bob Kane start teasing it as early as Detective Comics #31 in 1939, when Batman is faced with (and runs away from) one of Hugo Strange's gorillas: 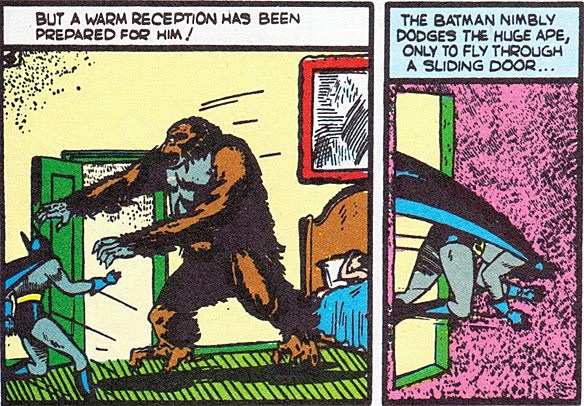 Obviously, they were still working out the kinks -- the Batman of today has beaten more gorillas than I can count, and I assure you, there is nothing I love doing more than counting the number of times Batman has beaten up a gorilla. But as time goes on, he gets a little closer. It's only a few months later, when dealing with the Mad Monk, that Batman has to take on a pack of wolves and disposes of them with some utility belt trickery: 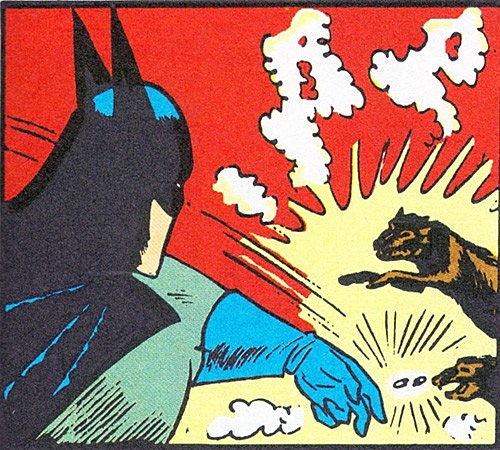 Incidentally, when Matt Wagner redid that story as the awesome Batman and the Mad Monk in 2007, Batman's response to the vampire wolves was a little more hands-on: 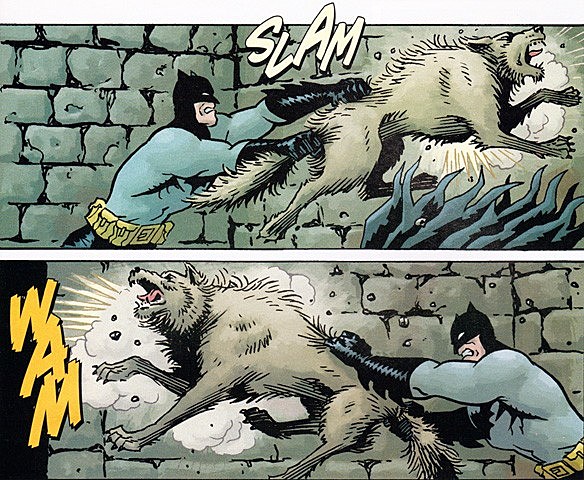 Back in the Golden Age, that level of onomatopoetic violence was still a ways off. We did, however, get one of the most awesomely bizarre acts of violence the Dark Knight would ever perpetrate against an animal in Detective Comics #43. See, back then it was customary for heroes to have a sort of calling card, and before he got the idea to just leave notes on crooks with a little bat drawn on them, Batman apparently thought it would be a good idea to send bad guys an actual living bat in the mail that would fly around when they opened the box... 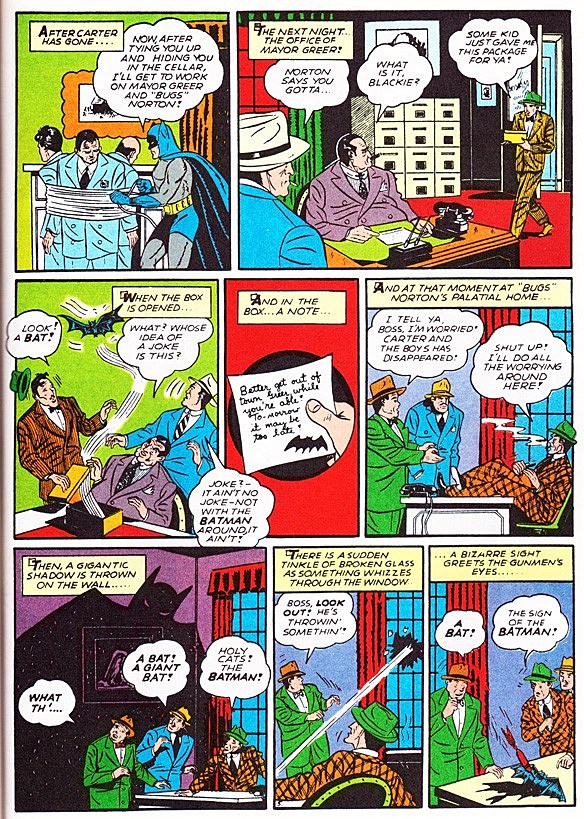 ...and then straight up kill it by throwing a dart at it through a window, which means that he was just hanging around outside waiting for the postman to arrive. That is both super hardcore and completely insane, but you can't deny that it's pretty effective in terms of striking terror into the hearts of criminals. If someone did that at my house, I would be f**king terrified. Sadly, for our purposes anyway, no punching was involved.

It got a little closer the next month in Detective Comics #44, when Batman made a giant housecat tap out to a modified full nelson with body scissors... 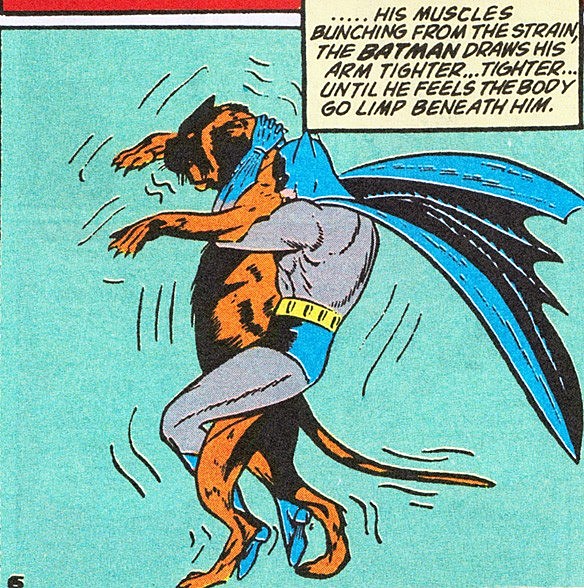 ...in a panel that was, of course, prefaced with Batman jumping onto its back while shouting "Not so fast, pussy!" Along the same lines, 1941's Batman #5 saw Batman choke out a lion with a sleeper hold: 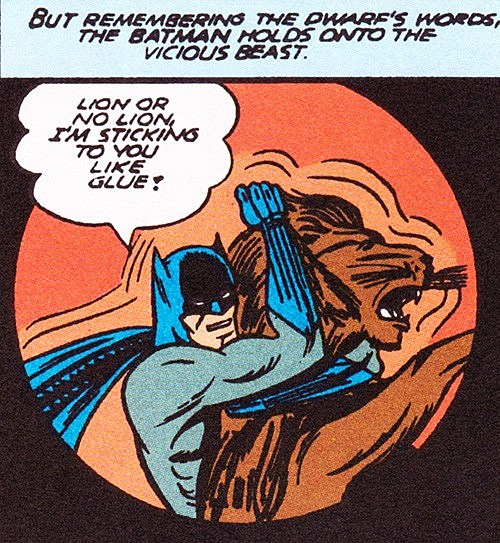 Again, there's a catch: It's actually just a witch shape-shifting into various forms.

But in Detective Comics #52 (June, 1941), it finally happens when a Yellow Peril villain decides it'll be a good idea to release the hounds: 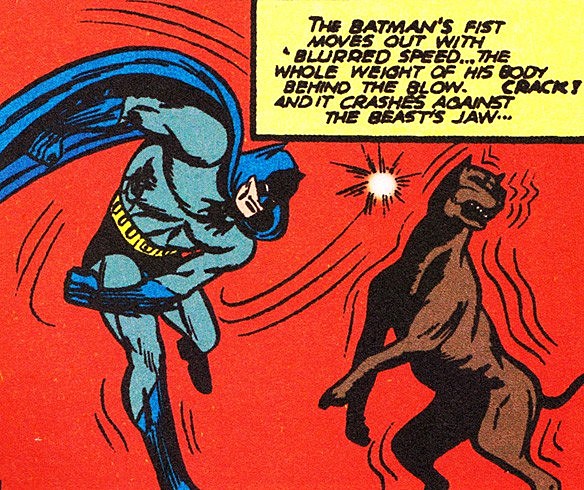 From that point on, there's no going back. Batman is a puncher of animals -- but to be fair, most of them are evil animals, and that has to count for something. I don't think I actually have a comprehensive list handy, but I can assure you that Batman has gotten into fistfights with dogs, wolves, panthers, lions, tigers, bears (oh my!), gorillas (regular), gorillas (telepathic), gorillas (other), sharks, horses, crocodiles, at least one eagle, and I distinctly remember an ostritch, although the issue number escapes me at the moment.

As for the most awesome, well, most people would probably go with a shark, whether it was the one he dropped the elbow on in the 1966 movie or the one he jacked up with a chain in "The Joker's Five-Way Revenge" from Batman 251: 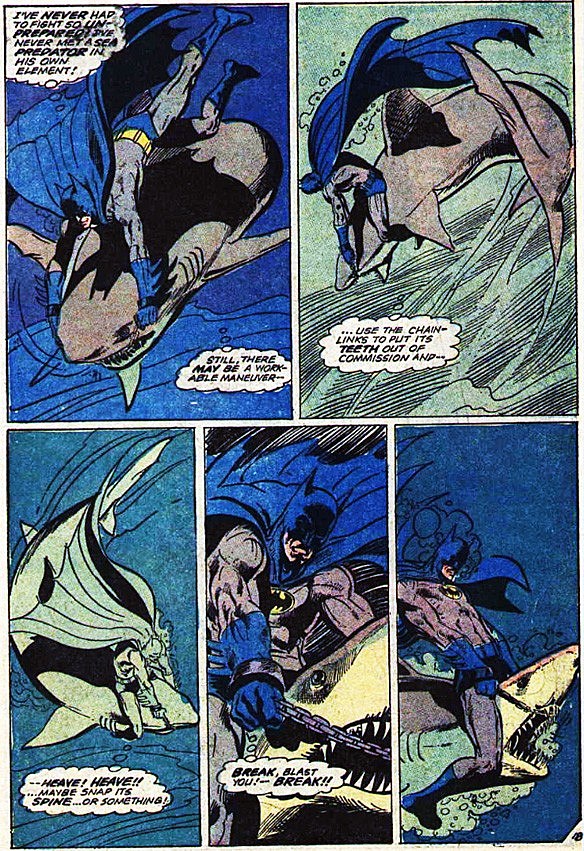 My favorite, however, is from a different story, and while it may not actually have punching, missing the letter of the question, I think it fits the spirit. It happens in Action Comics #465, in a story where Lex Luthor decides that the best way to kill Superman would be to turn him into a child and then make him punch himself in the face until he dies. This, for the record, is one of Luthor's more successful plans: 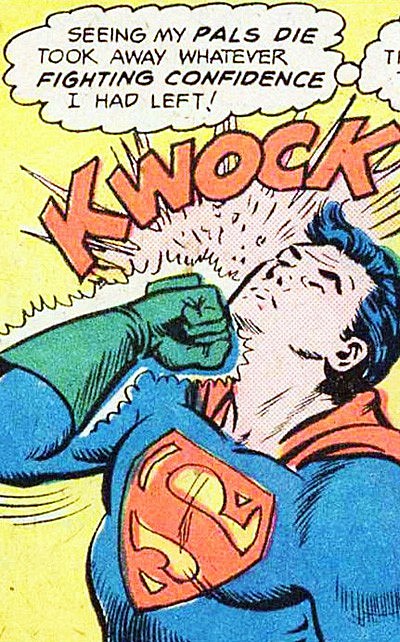 Along the way, he ends up turning Batman and the Flash into kids too, for reasons that I'm not going to get into so that we won't be here all afternoon (too late). Point being, Superman demands that Tiny Flash and Li'l Wayne prove their identities before it's actually them. For the Flash, that's as easy as just running at super-speed, but for Batman, things are a little more complex, especially since being dropped back into a younger body has robbed him of all of his training.

So what does Batman do to prove that he's the genuine article? Does he tell Superman something that only the two of them know? Does he use his keen deductive mind to solve a puzzle? No.

He beats up a motherf**king bear. 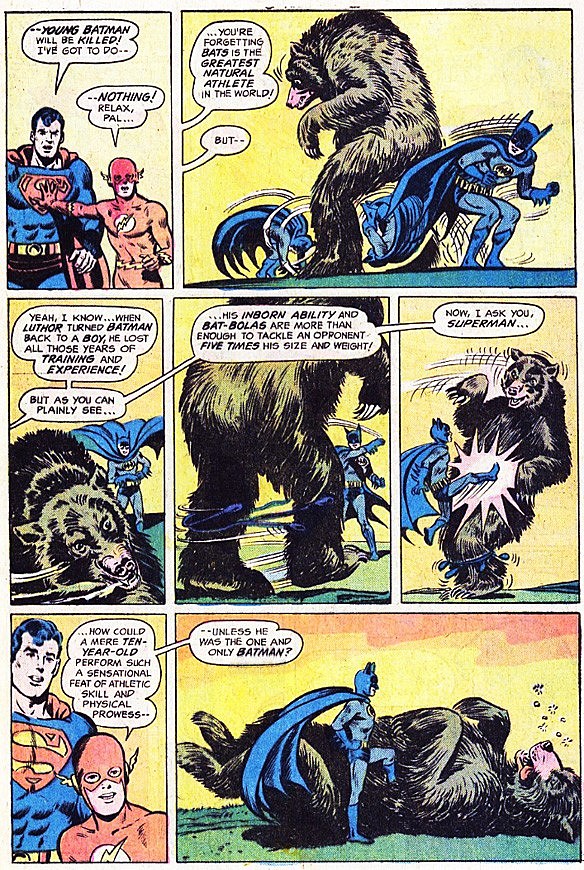 Of all the amazing things on that page, the idea that beating up bears is just something Batman has a natural talent for is only second to Li'l Wayne's Captain Morgan pose over a KOed grizzly. If I had a van, you best believe that last panel would be airbrushed on the side faster than you could say "Bronze Age."