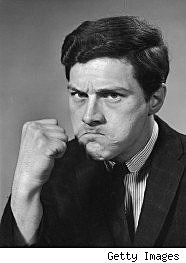 So you hate your dad. It happens. Whether there's a break in ideology, he made you kill and eat your childhood dog, or you just have an Oedipal complex, you and Dad are not on good terms, and the sound of Father's Day approaching turns your spine to broken glass. Everywhere you look there's another saccharine ad for a holiday sale, another stupid greeting card, another list of "yeah right" gift recommendations, and all you want to give Pa is a good gouge in the eye.

Listen: we feel your pain. In deep, sticky, draconian ways. And we're the chilly voice of reason here to remind you that your dream reconciliation will never happen. He'll be drunk, he won't like what you got him, and if you try to speak, he'll just tell you to shut up because "Ice Truckers" is on.

So don't bother. Instead of torturing yourself and pining for that mythical cathartic beer, stay home and read these comics to remind yourself why it's never gonna happen: He just doesn't get you and he is incapable of changing.

These are the comics your dad would hate. Take liberally with a bottle of scotch and the certainty that you are right.

It'll feel like getting taller than him all over again.

"The Frank Book" by Jim Woodring

With its blend of hallucinatory imagery, homily, and geometrically-shaped-card-playing chickens, "The Frank Book" is sure to raise your dad's ire. He thinks you have to be on drugs to enjoy this stuff, and dad never took drugs -- they're for the weak-willed. "I ain't trying to excape reality," he says, unaware that he's paraphrasing Tom Berenger in "Platoon." "I am reality."

Dad hates when people play the blame game. Pass the buck. He figures lots of people get molested; they just gotta "man up and be normal." And questioning your faith? That kind of talk will put you smack-dab on the Devil's doorstep. Your dad would riddle this book with bullets, burn it, and punch its ashes until his knuckles bleed. Why would he want to read "Blankets" when he has a pile of Jack Chick tracts in the crawlspace and a brand new gun? What happens in crawlspace stays in crawlspace.

Tricked into thinking he'd enjoy it after seeing "The Dark Knight," "Arkham Asylum"s creeping madness would plunge a rusty needle deep into the very cornea of your dad's ignorant worldview. If he ever got past the image of young Arkham's mother eating cockroaches, he'd eventually see Joker shapes in everything, like grinning, twisted visions of the Madonna. This paranoia would eat at his brain like a festering disease, turning him into a frail, wide-eyed insomniac. So maybe you should give him this. When it comes to crappy dads, double-A plays for keeps.

Hey, your father isn't one of those nuts who believes the Holocaust didn't happen. That would be crazy. He just thinks there's not enough evidence to confirm it, and that Adolf Hitler "had some interesting ideas." Big difference.

"One! Hundred! Demons!" by Lynda Barry

Lynda Barry's innocent, imaginative, heart-twinging memoir might elicit lumps in your throat, but your dad couldn't care any less about this book if it were a petition to legalize gay marriage. Your dad doesn't "do" heart-twinging memoirs, and would toss Barry's masterpiece out the pickup window faster than he could slap on a new pair of Truck-Nuts.

"The Invisibles" by Grant Morrison (and various artists)

"In this house we vote Republican."