Some readers have had questions about sexual content on ComicsAlliance, particularly because we've been rather critical about sexuality in superhero comics in the past. Much like in real life, sex -- and sexual content -- is neither good nor bad by default, but good or bad depending entirely on context. Also much like in real life, it's also a very complicated topic that a lot of people disagree about, which is why we think it deserves more dialogue and attention.There's nothing wrong with making art to titillate -- that is the entire point of porn and erotica, after all -- but it should above all be honest about what it is trying to do, and who it is trying to do it for. Superhero comics often ends up looking a lot like a really specialized form of erotica aimed exclusively at straight men, which is fine if it's trying to be erotica aimed exclusively at straight men, but can be a pretty strange experience if you're showing up for action-adventure tales of fantasy and drama that are intended to appeal to a wide audience for non-erotic reasons.

For the next two weeks, we'll be looking at a wide range of sexy comics in both the superhero genre and beyond, talking about how they look at their characters, what they're trying to accomplish, and what makes them succeed or fail. (Note: For those of you reading at work AOL rules mean that there will be no explicit nudity, for better or worse.) Not every comic we highlight will to appeal to everyone -- with the dominant superhero aesthetic and our recent gender-swapped art as cases in point -- so I would ask that people be tolerant, even if you feel like not every comic or piece of art is up your alley. There will be plenty of non-sexy reading options as well, which ideally means more sexiness that appeals to more people, not less. It's something that should be relatively easy to support unless you are some sort of Larfleeze of boners, which is the image I'm going to leave you with now. 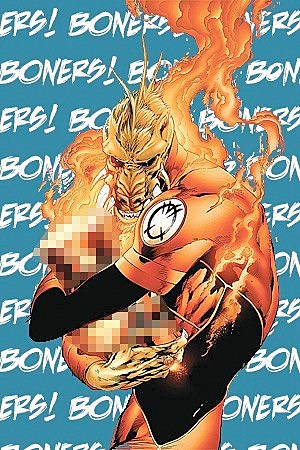