There was lots of applause for the Batman books, as DiDio continued to tease fans about his Dick Grayson deathwish. He revealed that "up until the eleventh hour, [Grayson] was gonna die in Infinite Crisis, and a lot after that had to be revised. But there turned out to be an outpour of trying to protect him, since he grew up with his fans. This is why we turned him into Batman." Azzarello mockingly replied that "he's not my Batman," while Van Sciver observed that "every fangirl [he's] ever met is in love with Dick Grayson. Women love that character."

DiDio said that Dick will not be leaving the costume, and he will be Batman during "Batman Inc" and for the foreseeable future. When asked about a Damian miniseries, DiDio hinted at one "by Andy Kubert." Whether that means art or written and drawn (fitting in with DC's new strategy of giving A-list artists permission to write their own books) was unclear.

A debate erupted over whether Batman should use a gun. Fans were vocally in support of Batman not using guns, although it was generally accepted that they were fine in alternate-universe stories like First Wave. Azzarello talked about writing "early" Batman, who's less of the "cynical, dark knight" and more of a "happy knight, with guns. That's the secret to happiness. Guns." 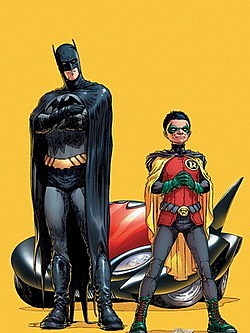 There was much discussion of Damian, and DiDio agreed with one fan that Damian should not age. "The concept of aging characters served everybody well for a period of time, but it's created all of our problems. The whole generational aspect is wonderful because it gives us history." DiDio feels it's best to hold the line, and "the constant reinventing of the same characters was getting confusing and factionalizing our audience," forcing them to have "their" Flash, Green Lantern or Atom. But since all of the legacy characters' origins shoot off of the original character, they brought back those original characters.

On the topic of the post-"Blackest Night" "dead means dead" rule, DiDio brought up Kid Devil's death in "Teen Titans." There was originally a plan for his resurrection, but to prevent the cheapening of death the plan was nixed. Van Sciver: "I don't want to read any more superheroes crying over open graves."

One fan likened Brightest Day to the television show "Lost," with interconnecting storylines and characters, even if their representation is uneven in each issue. When another fan jokes that Brightest Day should end with the revelation that all the characters are still dead, the audience booed but DiDio seemed rather taken with the concept.

DiDio talked about how once, after a panel, fourteen different creators pitched him on Aquaman and "the way to fix him," including Brian Azzarello. Azzarello mentions that it was actually approved, which DiDio follows with "oh yeah." DiDio then talked about how Aquaman and also Wonder Woman don't have "really great rogues galleries," which prompted Ethan Van Sciver to offer "Green Lantern" villain the Shark to Aquaman.

DiDio started talking about the origin of "Justice League: Generation Lost": "That book was something completely different when it started. It was going to feature certain characters who had fallen out of the limelight -- guys like Connor Hawke, etc., which is where the title came from. We sat in the meeting, we got everybody together, we were breaking out the story. Ryan Choi was another one of these characters. There were six different characters, and then they added Captain Atom, and then Fire, and then Ice, and then all of a sudden within 15 minutes it went from a book being about the lost generation to Justice League International. The energy, excitement, conversation and ideas started flowing, while the first book was forced." DiDio also revealed that Red Hood was in the original incarnation of "Generation Lost." 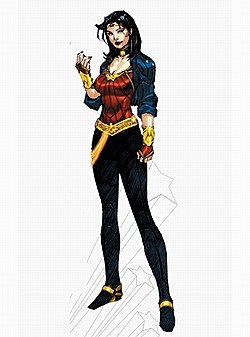 J. Michael Straczynski's Wonder Woman received a generally positive response, with fans enjoying the new suit: "I think what you're doing is interesting," said one. Didio talked about how Wonder Woman was considered perfect, and she's on such a pedestal, it makes it hard to tell stories. "Am I just speaking out of my rear end here?" asked DiDio. "No more than usual," replied Azzarello.

In response to a question about a "JLA/Avengers" followup, DiDio SAID, "I don't believe in company crossovers."

On Manhunter, DiDio said she was "the DC Universe's lawyer," and wasn't going to go away any time soon.

A fan asked the panel to reveal one thing that DiDio didn't want the audience to know. They responded:

Van Sciver: I'm working on a project with Gail [Simone] and Two-Face is in it.

Manapul: Something... new. A story arc.

Azzarello: Doing the First Wave stuff with Rags and Doc Savage -- six issues of that. Probably play around with that universe a little bit more, then -- I don't know what you have in store for me. And Eduardo Risso and I are starting another series for Vertigo.

Another fan heaped praise on the "Rise of Arsenal" miniseries, saying that "you guys wrecked his life in, like, one issue." Another fan yelled that Roy should gain a dead cat as a sidekick, prompting DiDio to reveal that a dead cat joke is indeed coming up in a future DC book.

On the topic of more "Wednesday Comics," DiDio said that while "it had a really good nostalgia feel, the newspaper formula might not be how we want to go, but we have some ideas." A fan asked if that meant a digital version, and DiDio was coy.

The panel ended with a question about former Batgirl and fan-favorite Cassandra Cain, prompting DiDio to declare he'd answered "one question too many" and end the panel.

Filed Under: brian azzarello, BrianAzzarello, damian, Dan DiDio, DanDidio, DC Nation, DcNation, Dick Grayson, DickGrayson, fan expo, FanExpo, generation lost, GenerationLost, wednesday comics, WednesdayComics
Categories: Conventions, DC, News
Comments
Leave A Comment
Breaking Macho: What ‘Logan’ And ‘Lego Batman’ Have In Common
Why A ‘Nightwing’ Movie Could Be Vital For Roma Representation
The Definitive Power Ranking Of Every Single ‘LEGO Batman Movie’ Minifigure
An Epic Adventure Is Underway In ‘The Kamandi Challenge’ #1 [Preview]
The DC Universe Collides With Hanna-Barbera’s Most Beloved Characters In March
12 Facts You May Not Have Known About Robin
Lego Batman Movie Minifigures Dig Deep Into the Wardrobe and Rogues’ Gallery
What You Might Have Missed In DC’s January 2017 Solicitations
Hate Speech And The Fight For Roma Representation After New York Comic Con