Welcome to Digital ComicsAlliance! This is the news post, and we're going to tackle the biggest news of the week, outstanding issues with digital comics, sales, and whatever else is relevant to digital comics. This week, I'm taking a look at how the addition of schedules for digital comics are a no-brainer, and why the industry desperately needs to develop a system for preordering digital comics if they want to compete with other media.

DC Comics is launching fifty-two new ongoing series in September, each of which will be available day-and-date digitally. We're just past the point where the buzz was at a fever pitch. For a good two weeks, DC Comics dominated our corner of the internet, and even managed to get the attention of the mainstream media and, of all people, my grandfather, who wanted to know what the big deal was. If any of those people who saw all this press, or spent hours arguing about how stupid some aspect of the reboot is, wanted to preorder those comics, they can't. You could go into a comic shop and order a printed copy, sure, but that defeats the entire point of digital comics. There's no mechanism in place for preordering digital comics, and at the moment, there's not even a schedule of releases. 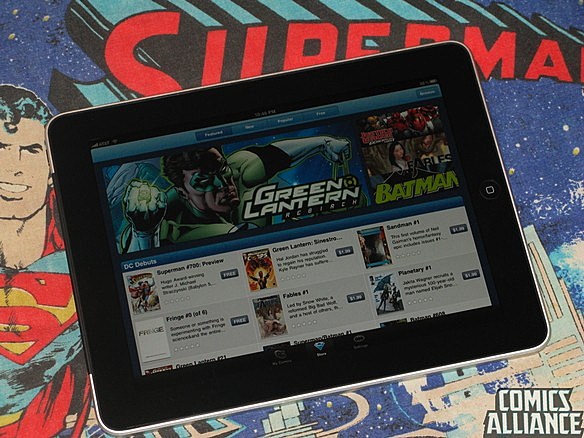 Barring promotional stunts, almost every aspect of pop culture has release dates that are announced months (or, in the case of Dr. Dre's ten years in the waiting album Detox, years) in advance. I'm planning to see movies that don't come out until six months from now and keeping an eye on release dates for Charlie Huston's new novel (Skinner is coming at some point in 2012). Oftentimes, I'll preorder something, forget about it, and then get a nice surprise down the line. Preordering is a way to get your customers to put up some cash (or the promise of cash) before their white-hot enthusiasm dampens down to "oh, yeah, I'll have to keep that in mind."

For example, comics scribe Duane Swierczynski, who also writes book-books, has a new novel coming out on Halloween called Hell & Gone, the second part of a trilogy. If you wanted, you could preorder it right now from Amazon in print or on Kindle, and it would be on your doorstep or device on Halloween morning (or whenever UPS deigns to come by your place). The hardcover for Charlie Huston and Juan Jose Ryp's awkwardly-named but great Wolverine: The Best There Is - Contagion arrives in July, and yep, you can preorder that, too.

But right now, there are precious few series that come out in digital format on any sort of schedule. IDW, for example, releases digital comics roughly four weeks after their print release. Marvel does it either six months after the print release or willy-nilly, depending on the series. Good luck finding out what's due when, though, because there's no aggregator out there that collates this data. The companies don't even make this data public. If you want to know what's coming, you have to either keep track of specific series ("Okay, this comic always releases in digital form two weeks after") or scour the new releases list, if there is one, every week.

DC's big push this September is definitely going to be a turning point. It's the biggest move in the short history of digital comics since the iPad came out. Digital comics need schedules and a preordering system that puts the comic on your device the morning it comes out. Users, whether die-hard fans or someone who saw an article in the New York Post, should be able to go to a website, click a box, and be guaranteed a copy of a comic as soon as they hear about it.

Comics don't have the incredible marketing budget that movies have, nor the brand name recognition of weekly newsmagazines. They have to keep visibility high somehow, and a slapdash release schedule isn't the way. Comics are solicited to retail stores three months in advance, and sometimes six months or more to major outlets like Amazon or Barnes & Noble. Assuming that most comics will come out on time, what's stopping publishers or distributors from creating a schedule based on that info? "You can buy this comic on this date, or you can preorder it now and we will deliver it to you."

It seems like spending the cash to get the system in place now will serve everyone in the future when DC drags digital comics back to the forefront of the comics conversation in September. If you tell me what I can buy, if you put that information in front of me ahead of time, then I'm much more likely to purchase books on a regular basis. If you just throw the info up on an RSS feed or a giant webpage once a week, then I have to put in some real work to find things to buy.

Purchasing digital comics should be just as easy as buying everything else. Dark Horse has already taken a step in the right direction. Now, we just need someone to take this all the way.

-Paperkeg on Digital comics: I came across two essays on Paperkeg that I thought were pretty interesting in terms of digital comics. Jon Stump discusses Playboy's digital presence in this SFW post, and finds that the skin mag managed to get an astonishing amount of things right with their app. He proposes that Marvel and DC could learn something from them--I agree. Another contributor throws some cold water onto the idea of DRM-free digital comics. I'm sad to say that the essay is probably correct. In the best of all possible worlds, we'd get digital comics without DRM. In this world, though? We can't even get people to stop buying comics by Greg Land.

-Slave Labor Joins iVerse: Slave Labor Graphics has allied with iVerse to put more digital comics out there on the iVerse Comics+ app. There's not too much to analyze here, beyond offering your wares in a variety of locations being a good thing. Presumably the stock on iVerse's story will be non-exclusive, so the offerings in Comics+ will be the same as what's offered elsewhere.

-David Welsh vs the Viz Manga App: David Welsh, one of the most interesting manga bloggers around, picked up an iPad and took a look around Viz's app. He finds its offerings cautious, with Viz perhaps hedging its bets toward commercially successful material a little too much, but welcomes the addition of more diverse fare. To help Viz along, he provides a list of five manga that are worth a digital release. Hopefully, Viz is listening--David's suggestions are pretty good.