We've spent a lot of time writing about digital comics here on ComicsAlliance. As far as developments in comics go, it has the potential to be one of the biggest. To cap off a year full of interesting and possibly fantastic developments, we reached out to some major figures in the world of digital comics for a little something we're calling Digital December. Over the course of the next week, we'll be talking to some of the most important publishers in comics to answer some questions about the landscape of digital comics straight from the horse's mouth.

Our first stop was Dark Horse Comics, which just announced the details of their new digital comics store slated to launch in January, and has had a series of high profile digital launches over the past year, including Frank Miller's 300.Dark Horse publishes a mix of generally highly-regarded creator-owned work from people like Mike Mignola, Frank Miller, and Stan Sakai, and licensed works that adapt video games or movies. Their third pillar is their manga line, which is currently not available for digital consumption. We spoke to Online Marketing Manager Matt Parkinson about Dark Horse's digital plans.

ComicsAlliance: To begin at the beginning, how long has Dark Horse been producing digital comics?

Matt Parkinson: We officially launched our digital initiative at [San Diego Comic-Con] in 2009 with a handful of select Dark Horse titles on iTunes. Since that time, we've continued to release some of our most popular titles through the iTunes store including Hellboy, Serenity, Star Wars, Mass Effect, The Guild, Dr. Horrible, The Umbrella Academy and more. We've also released a couple of our titles through Comixology and Panel Fly as well.

CA: Generally, how have digital comics performed in the marketplace for Dark Horse? Have there been any series that were surprise hits in digital form that just sold on par in print?

MP: The general fan response for our digital comics line has been strong. Our launch plans were conservative, but based on the strong performance of those initial titles we immediately saw the financial potential that digital publishing held.

All of our apps have performed well on the iTunes store. The Mass Effect: Redemption series and The Guild surpassed our initial expectations, as they were both new and untested titles for us. We knew both properties had an existing fan base, but whether they would be interested in downloading and reading a digital comic was another story. We did a good job connecting with those established communities via marketing/promotional outreach, and we saw a tremendous number of downloads as a result. Both titles were among the top five best-selling book apps in the iTunes store at the time of release. 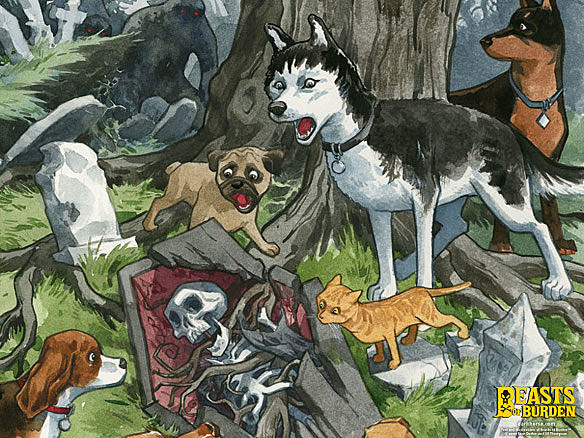 CA: Traditional direct market comic book shops generally serve a certain demographic, while bookstores serve a somewhat more mainstream demographic. Have digital comics sales aligned with one or the other?

MP: It's clear that digital comics serve both demographics. I believe we've also seen the emergence of a new type of reader: the more tech-savvy, content-hungry consumer. Digital distribution has enabled us to reach an entirely new consumer base who might not be categorized as a conventional "comic book/graphic novel" fan, but they still want to read a good story. They aren't biased in terms of storylines, genre, or publisher (i.e. caped vs. non-caped heroes, licensed vs. non-licensed titles, etc.). They're looking for a short burst of entertainment, and we're able to deliver it.

Going back to the Mass Effect example, there was already an existing audience who was very much "wired in" to the technological world. While the ME physical comic sold commendably, the digital comic performed just as well if not a little stronger. We were able to get our digital comics in front of that fan base in a way that was very easy and convenient for them to make the purchase. 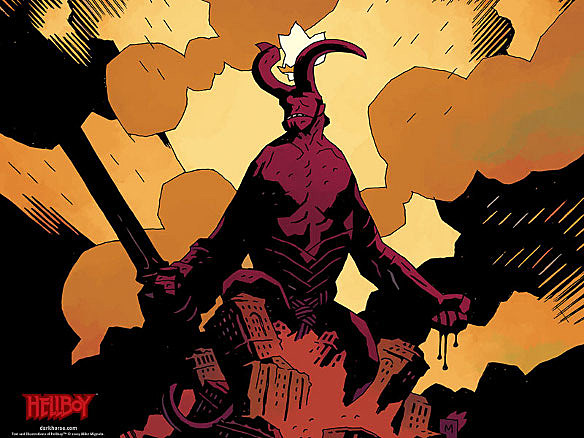 CA: The industry-wide digital comics rollout has been fairly conservative. How do you go about choosing which series get converted to digital format first?

MP: Dark Horse has a tried and true roster of titles that consistently perform well in both the comics and bookstore markets. It was a no-brainer to launch with a number of those, as we felt confident that they would perform very well for us. The more challenging questions were how aggressively were we going to roll out the line out of specific titles, and were we offering the most competitive pricing model, without devaluing the brand?

At launch there will be several of the usual suspects: Conan, Hellboy, B.P.R.D., Umbrella Academy, Serenity and the like. In addition to the more obvious tiles, we're also launching with Jill Thompson & Evan Dorkin's critically acclaimed series Beasts of Burden, Adam Warren's ever-popular Empowered, plus the Usagi Yojimbo: Yokai original graphic novel by Stan Sakai. Beyond that... We've got a number of other "surprises" up our sleeves for the coming months. 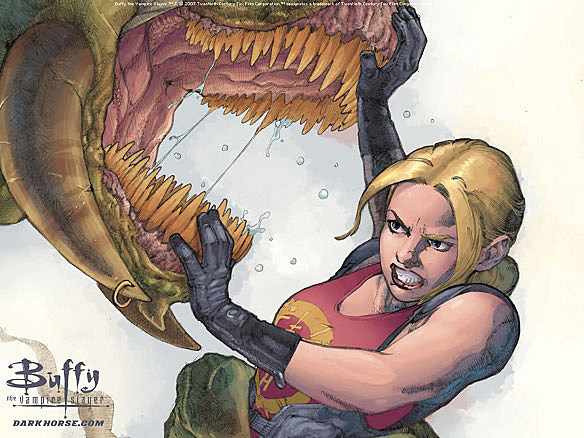 CA: Will digital comics purchased on iTunes prior to Dark Horse's January launch be compatible with the new software? Will the current slate of titles eventually be removed from iTunes and replaced with new versions that integrate with the new service?

MP: Once the Dark Horse Digital Store launches in January, apps previously downloaded from the iTunes store will be eligible for update, free of charge. The updates will happen in small batches with new versions of our comics that both support the iPad and allow in-place registration for the same title in our bookshelf (as allowed by licensors). So all those individual DH apps you're currently carrying around on your device will go away once you make the update, then you'll be able to house all your DH titles on our bookshelf app.

CA: Dark Horse publishes a number of licensed titles, which generally have different rights situations than titles Dark Horse or creators owns outright. Does this provide any unique challenges or benefits when it comes to digital comics?

MP: There have been a few wrinkles involving digital rights with some licensed properties that have needed to be ironed out. Although this may be a speed bump in the process, it is not a major obstacle. We've found that most creators can't wait to have their comics available digitally, so that hasn't really been much of a hurdle at all. Plus, they're more than willing to get behind the program and help to promote the apps and digital store. This is a great benefit for us, as it increases the buzz factor among fans. While we're trying to keep all parties happy, we're obviously not able to make every title we publish available at launch, but it's our goal to have the entire line of DH titles available on the digital store in the future.

MP: As you mentioned, some titles will receive day and date, or what we call "synchronized release" (comics hitting retailer shelves and our digital store on the same day) while others will have a slight gap between direct market on sale date and digital on sale date. At that point, the decision when to release will be made on a title-by-title basis. The nice thing about having created this technology in-house is that we have the freedom, control, and flexibility to test drive where the "sweet spot" for those non-day and date sales lie. We'll be targeting the first few weeks after said title has hit the retailer shelves, as there will still be a fair amount of buzz for the title and interest won't have completely lapsed.

CA: In terms of the current digital comics reading experience, comics are generally not downloaded, but are rather stored on the cloud and inaccessible for anything but reading. How do traditional ideas of ownership, whether that means the ability to legally transfer a work to another machine or simply having the ability to have a comic book stored on your desktop, factor into your plans?

MP: From an "ownership rights" POV, we're just like Amazon, or Apple: you don't "own" the books you buy from our digital store, you license rights to read them on supported/authorized devices. We may allow reading on arbitrary PCs, but we're not going to support copying from device to device without going through our service, at least not any time soon. 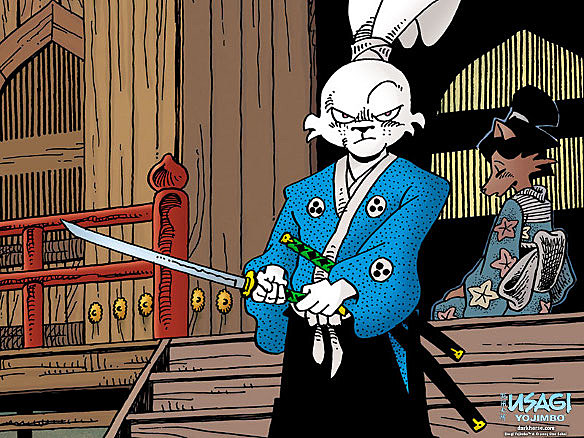 CA: A common question is whether or not digital comics will have an iTunes -- a centralized store with a deep library across a variety of publishers. Dark Horse has chosen to go it alone with a standalone, proprietary store that isn't connected to a third-party distributor. What benefit does this have for Dark Horse?

MP: Developing the Bookshelf app/digital store technology in-house allows us to exert more control over our content in terms of how we choose to present and distribute it. It also allows us to experiment with different distribution and pricing models. Additionally, it ends up earning both our creators and us a little more money.

Another benefit to having created the technology ourselves is that we are able to cut out the middleman, which allows us to spread the savings onto the customer and offer industry low pricing of our comics at $1.49!

CA: Where and how comics are sold has a habit of creating massive change in the comics industry. The rise of the Direct Market helped change how comics were consumed and to who they were sold. Speculators in the nineties depended on scarcity and conjecture to turn a fast buck. How do you see the advent of easy-to-attain and affordable digital comics affecting the comics industry?

MP: Digital comics are another evolutionary stage in the growth process of the comics industry. For the short term, digital comics are helping to inject new life and energy into the industry. Through the convenience and accessibility that digital distribution affords, plus the ubiquity of tablets/smartphones there is great financial potential for comics publishers.

I've said this before, but I believe we have an incredible opportunity to connect with and engage an entirely new audience and get them excited about comics... and that's a really good thing! I don't have a crystal ball to see into the future, so the long-term impact of how digital publishing will impact physical sales and business for the brick and mortars (both comics shops and bookstores) remains to be seen. It would be naïve not to acknowledge that challenges will most certainly present themselves, and we'll need to find creative solutions to keep all three markets healthy and happy, but it's our mission to continue producing the highest quality work, and making it available to both existing and new readers in as many formats as possible. 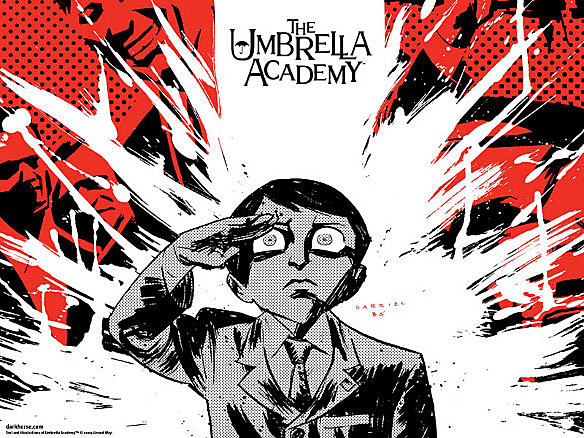