* I ain't much on Casanova

In the comics equivalent of releasing the DVD extras before the theatrical premiere, $2 gets you a one-shot with script fragments and an interview with artist Jacen Burrows about the H.P. Lovecraft-inspired series Moore was so excited about he couldn't remember its name in one interview. Note that this is about two weeks shy of being a year late for its originally announced release date, too.

Gould was maybe the greatest character designer American comic strips have ever had, and he hit his peak in that department in the strips reprinted here: The Brow, B.O. Plenty and Flattop Jones all make their first appearances. So does Breathless Mahoney, which means we can blame this on Gould. 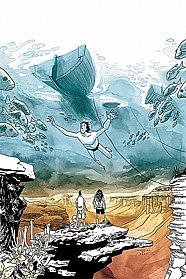 The first issue of this Fabio Moon/Gabriel Bá miniseries left me wondering where it could possibly go, but CA's Laura Hudson says I really have to read the second one to "get it." Laura, I am counting on you.

Now that there's going to be a Human Target TV show -- twenty years after the one that starred Rick Springfield -- Vertigo is collecting the Peter Milligan-written 1999 miniseries and 2002 "Final Cut" graphic novel. They're probably much closer to the tone of the show than the original Len Wein/Dick Giordano stories from the '70s, but it'd be nice to see those two get an extra payday.

In which Tony Stark continues to not wake up. (This issue, apparently, Dr. Strange shows up with smelling salts or something.) On the other hand, the supporting players Matt Fraction and Salvador Larroca have assembled for this series are interesting enough that I'd be happy to just read a series about them for a while.

Paul Tobin's mission to rehabilitate every forgotten character in the Marvel Universe continues with this issue's appearance by Plantman, who this issue apparently takes on the Silver Surfer in one of those "what happens in panel number two?" confrontations. In the meantime, please enjoy this two-minute Gary Young video about Plantman. Or a Plantman, at any rate. 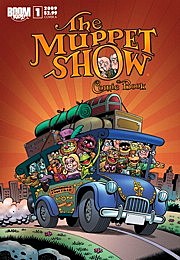 Boom! relaunches the Roger Langridge-written-and-drawn Muppet project as an ongoing series, in which the popular felt vaudeville ensemble takes to the road. I like the musical numbers Langridge has been integrating into this series; too bad he's limited to public-domain songs, because the Muppets do well with more recent material too.

The final collection of the Brian Michael Bendis/Stuart Immonen run, in which Bendis's version of teenage Peter Parker gets caught up in a Grand Guignol crossover. Also out this week: the "Ultimatum" paperback itself. Lock up your children!