Today, Grant Morrison: Talking With Gods -- the feature-length documentary by Respect! Films, directed by Patrick Meaney -- was supposed to drop but seems to not be available until December 15, at least. It's a very well-crafted piece of work, a clear labor of love and result of the fairly extensive access Morrison and his friends and family gave the filmmakers. While it's an interesting documentary on its own, it's of special interest to anyone who's ever read a Grant Morrison comic and asked themselves: "Where the hell is this guy coming from?" Talking With Gods has your answer, and it's one that I couldn't take my eyes away from, interesting and entertaining for experienced Morrison scholars and casual readers alike.

Wrapped up in the layers of mystique and mythology, it's easy to forget that Grant Morrison is a real person, a guy who listens to music and loves his wife and misses his dad.The Grant Morrison Legend is certainly self-perpetuated, and unquestionably interesting, but Talking With Gods allowed me to really peer through to Grant Morrison, The Dude for maybe the first time. What makes Meaney's film so effective is that he doesn't canonize his subject - while there's a great deal of hero worship going on in the interviews with critics and other creators, it feels like Meaney's reporting on an existing bias rather than manufacturing one in editing. As a result, it gives us an honest look not only at how he's influenced an entire generation of creators, but also connects the themes and concepts of Morrison's work to his childhood and everyday life.

As someone who studies Morrison out of a deep passion for his work, there was still a great deal of new material for me in here, and the stuff I already knew was presented in new contexts and from new perspectives. Take, for instance, the thematic link between Final Crisis: Superman Beyond and Morrison's childhood. His parents were both huge anti-bomb activists, and his entire childhood was spent mentally and emotionally dealing with the spectre of nuclear holocaust. Discovering superhero comics was, for him, a revelation, since they presented a depiction of reality that implied that existence wasn't hopeless and death wasn't right over the horizon - replacing the apocalyptic narrative with the heroic. This personal experience mirrors almost exactly the events of Superman Beyond, where Superman travels to the world of the Monitors and replaces their apocalyptic prophecy of which they all live in fear with the story of an infant boy rocketed from a dying planet. 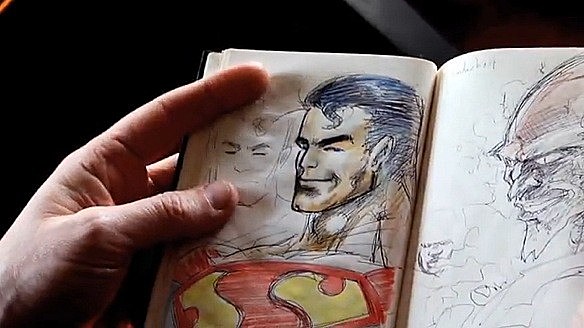 The movie also offers a great deal of insight into his creative process; interviews with numerous artists touch on his scripting style, the way he collaborates and the intersections between magic, drugs and writing. Cameron Stewart, Frazer Irving, Chris Weston, Steve Yeowell and Jill Thompson all have wildly different interpretations on the collaborative creative process with him, and watching them talk about it is a joy. Additionally, co-writers like Mark Waid and Geoff Johns make appearances, although drama addicts everywhere will probably bemoan the lack of a segment on the falling out with Mark Millar.

These are the kinds of insights I was able to gain from TWG, and I'm sure I've only scratched the surface. More than just a documentary of his personal or artistic lives, it looks at the intersection between the two, and asks the viewer to make up his or her own mind. Did Grant Morrison really trap a scorpion loa in the base of his spine with a tattoo? Did he really win his wife over with a ritualistic prayer to Aphrodite? I have no idea. Do I believe that Grant Morrison believes? Absolutely. In short, if you have any interest whatsoever in the man's work and where it comes from, this is pretty much must-viewing, with the fact that you get to see pages of Invisibles get Ken Burns Effected as a bonus.