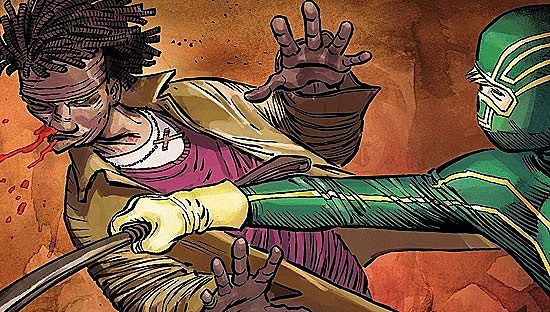 Yesterday, Mark Millar (co-creator of "Kick-Ass" and "Wanted") announced not only that a comic book sequel to "Kick-Ass" is coming this September, but that the second movie -- "Kick-Ass 2: Balls to the Wall" -- is scheduled to begin production in 2011 and will be released in theaters in 2012. While there were few other details, Millar promised "fans of the movie can find out what happens two years in advance by picking up CLiNT," Millar's new U.K.-focused magazine which he says "isn't aimed at comic stores."

The "Kick-Ass" comic book sequel will launch in the first issue of "CLiNT," which hits stands on September 2, along with material from British TV host Jonathan Ross and comedian Frankie Boyle. The magazine will be "aimed almost entirely at the UK" and will feature comics-related interviews, features and original comic book stories. According to Millar, "If people in the US want a copy [of CLiNT] that's great, but this is being put together with casual British readers in mind... for 16-30 year old men."

The original "Kick-Ass" story was hailed by Millar as a "realistic" take on the possibility of someone trying to become a superhero. Namely, that no one COULD or SHOULD want to be a hero, as it was a life of violence and danger with no clear reward and only someone crazy would be any good at it. Although the last scene of both the film and the comic involved a character swearing revenge against our the title character, it still seems strange to have a sequel. After all, if the story progresses to show that our would-be hero Dave (a.k.a. Kick-Ass) must return to his costumed identity because an old enemy from the past has resurfaced, doesn't that leave the realm of a "realistic" approach and just become a straight-forward superhero story?

Then again, I think we left the premise of a realism-driven, dark-humored cautionary tale as soon as we introduced Hit-Girl. Don't get me wrong, folks. Love Hit-Girl. Fun character? Absolutely. Antithetical to the premise introduced in the beginning of the story? Probably. And will audiences really enjoy her ultraviolent, c-bomb dropping antics as much if they see her as an older character in a sequel?