The upcoming Green Lantern comics event 'Blackest Night' is based around a colorful idea: the green willpower of the Green Lanterns and the yellow fear power of the Sinestro Corps aren't alone; there's actually an entire rainbow of Lanterns, with ROYGBIV energy powers based on different emotions.

Creating new characters by changing the colors of old ones is nothing new in comics, but I can't help thinking how much the new Lantern spectrum reminds me of another group of rainbow-colored characters with emotion-based energy powers -- the Care Bears. How would the Lanterns -- and their respective emotions -- fare against their Care Bear color counterparts? We put them in the emotional octagon to find out. 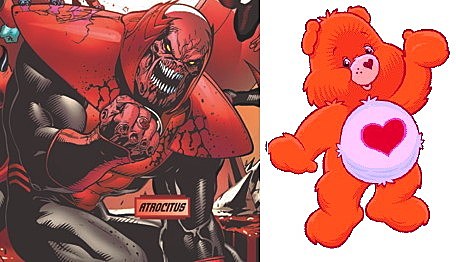 Rage vs. Sensitivity. This one almost isn't fair. It's a dude named Atrocitus, who looks like that, versus Tenderheart Bear and his fuzzy white tummy with in a giant heart on it. I don't know if you've ever seen a particularly sensitive person come face to face with someone in the throes of full-blown rage, but they pretty much crumple up like giant paper accordions. First blood goes to the Lanterns. One imagines there would be a lot of it.

See the rest of the deathmath after the jump! 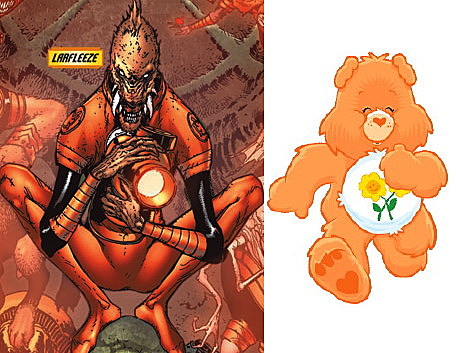 Avarice vs. Friendship. The more familiar name for avarice is greed -- not just the desire for riches, but the desire to hoard them and take them from others. There's a reason this dude is the only Orange Lantern, and it's that he's a tightfisted, thieving douche who alienates everyone around him. Larfleeze has no friends and thus no backup, whereas Friend Bear is by definition going to roll with a posse. Advantage: Friend Bear 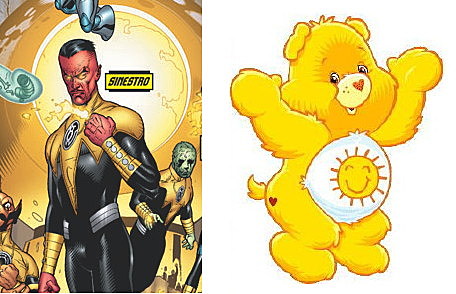 Fear vs. Optimism. Having a positive outlook on life is great and all, but looking on the bright side of life is only so useful when you're about to crap your pants with terror. Sorry, Funshine Bear. I'm sure you're a hoot at parties and all, but given the fact that yellow energy has caused entire civilizations to destroy themselves out of sheer panic and paranoia, I just don't think you have the cajones to handle what Sinestro's throwing down. Advantage: Yellow Lantern 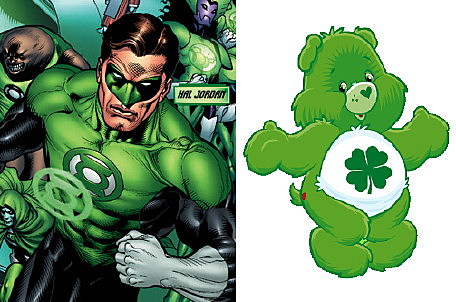 Willpower vs. Luck. The power rings of the Green Lanterns allow them to make their ideas into reality using the strength of their wills, which is pretty much the opposite of relying on luck and letting the dice make the decisions for you. Look at Good Luck Bear in that picture: He's practically throwing his arms up and saying, "Whatevs!" When someone who depends on lucky breaks contends with steely, unyielding determination, in the end the house (and Hal) will always win. Advantage: Green Lantern 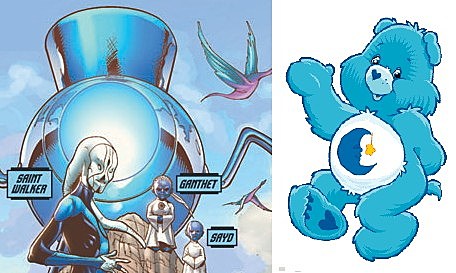 Hope vs. Sleepiness. This one might seem obvious -- HOPE! -- but remember that sleep is a powerful biological urge that cannot be ignored. It's kind of like making hope face off against hunger -- the dream of a better world is a wonderful thing, but it also will not be able to help you if you starve to death. Still, if you stack up hope and its power to change the way we imagine and create the future against the power to yawn less throughout the day, it's not that much of a contest. Advantage: Blue Lantern 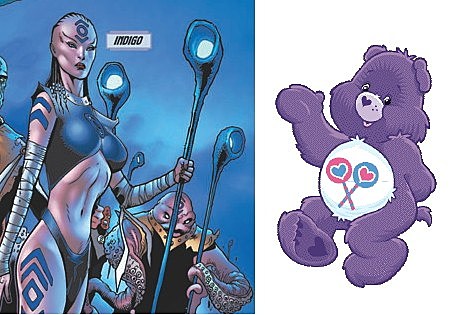 Empathy vs. Generosity. Ultimately, this battle breaks down to "caring vs. sharing," so it's best to start by forgetting everything Barney ever told you. Caring is a feeling, but sharing is taking an action, and sadly the two are far less linked than grade school platitudes would have you believe. At the end of the day, the glory goes not to the person who feels or intends something, but to the person who does something about it. Plus, Indigo is a total Caiera ripoff. Advantage: Share Bear 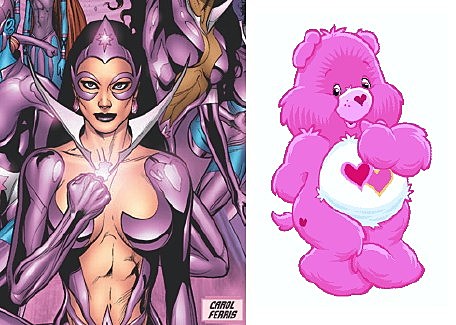 Love vs. Love. Carol Ferris (a.k.a. Star Sapphire) and Love-a-Lot Bear have a lot in common. They're both women -- in fact, Violet Lanterns can ONLY be women -- with pinkish costumes who possess the power of love and the mission of spreading it to the world. I guess what we're supposed to take away from this is that love is best represented by vaginas and pale red colors, and/or that Violet Lanterns are closer as to being Care Bears than I'm really comfortable with. Either way, it's a tie.
Black Hand (Black Lantern) vs. Grumpy Bear 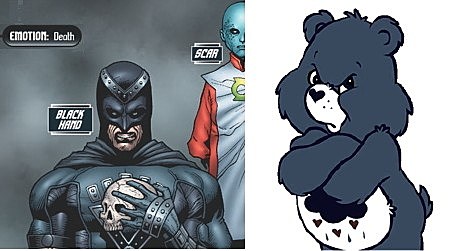 Death vs. Grumpiness. So, the whole idea behind the "all the Lanterns of the rainbooow" concept is that each color in the electromagnetic spectrum is linked to an emotion, which is in the case of the Black Lanterns is death. Can you see the problem here? For starters, black is not a color in the visible electromagnetic spectrum, and secondly and more irritatingly, death is not an emotion. I want that on a frigging t-shirt with that picture of Black Hand eating the flesh off a skull with a giant rainbow over the whole thing: DEATH IS NOT AN EMOTION. "But it's the absence of emotion!" DC and its promotional copy might say. Sure? That means you actually agree with me, that the caption makes no sense, and also that Black Hand is disqualified for having the power of nothing. Besides, look at Grumpy Bear's face here -- he is not playing. He is in a bad frigging mood and he will kick your ass. Advantage: Grumpy Bear
Filed Under: Black Lantern, Blackest Night, BlackestNight, BlackLantern, blue lantern, BlueLantern, Care Bears, CareBears, Geoff Johns, GeoffJohns, Green Lantern, GreenLantern, indigo tribe, IndigoTribe, Orange Lantern, OrangeLantern, red lantern, RedLantern, sinestro corps, SinestroCorps
Categories: DC, Television
Comments
Leave A Comment
Back To Top