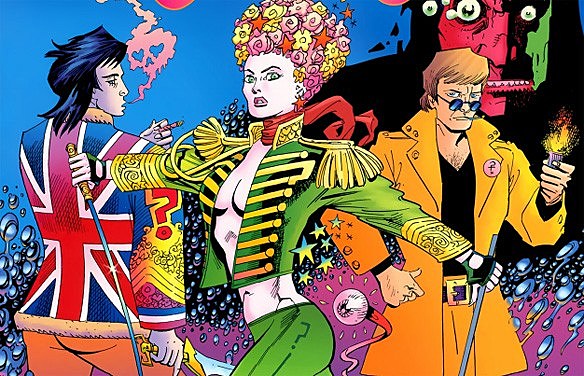 This week, Top Shelf released the latest volume of Alan Moore and Kevin O'Neill's League of Extraordinary Gentlemen. In Century: 1969, Moore and O'Neill continue their tour of 20th century literature, and to say that it's something I was looking forward to is a bit of an understatement. For twelve years, the League has been one of my favorite comics, a fascinating piece of work that took the "everything counts" stance that's often advocated for super-hero continuity and applied it to every story, blending it with a thrilling narrative that featured Dracula, Martians, Fu Manchu and Professor Moriarty. The end result of 1969, however, is a pretty big letdown. It's the first part of the series that I don't like. But I still find it absolutely fascinating.Saying that Alan Moore and Kevin O'Neill are smart guys is pretty close to being the understatement of the year, and watching them create their massive literary mash-up is enthralling. There's a baseline level of craftsmanship from those guys that makes it worth reading, especially when it gets to the point where Moore starts creating a Grand Unified Theory of Evil Fictional Wizards that links a fictional version of Aleister Crowley to Lord Voldemort.

The problem is that at this point, all of this expounding and world building has shoved the actual storytelling of the comic to the back burner. The great thing about the first two volumes of League wasn't just that they featured well-known public domain characters, but that they used them to tell thrilling stories that didn't necessarily require a college degree to understand. Moriarty using a Cavorite zeppelin to rain down fire on Fu Manchu or Mr. Hyde punching out Martian tripods aren't just exciting for the English majors, they're also enjoyable conflicts all on their own, and because he was dealing with a smaller circle of influences, Moore was able to craft simpler, more elegant explanations to catch up the slackers in audience (like me) who didn't know Allan Quatermain from AJ Raffles.

Even Black Dossier, which most people cite as the moment when the franchise "disappeared up its own a**," as a friend of mine put it, had an underlying story that was built to make sense within the context Moore and O'Neill were creating. To hear other people talk about it, it seems like I'm one of about eight people who actually liked that comic, and I agree that there's a lot of it that's pretty masturbatory -- as most fan-fiction tends to be -- but still. Even putting aside the fact that it features Bertie Wooster vs. Cthulhu, the overarching story of two immortal adventurers trying to escape Britain as it rebuilds itself from a totalitarian regime (Airstrip One from 1984) while being hunted by two secret agents (James Bond and Emma Peel) is exciting, even if you don't know the information in parentheses.

And again: The story elements that actually are in the book are things I like and find interesting. The idea of Mina Murray desperately trying to stay relevant as the world changes dramatically around her is extremely engaging and relatable, especially when her facade of cool relevance cracks under the stress she's experiencing. 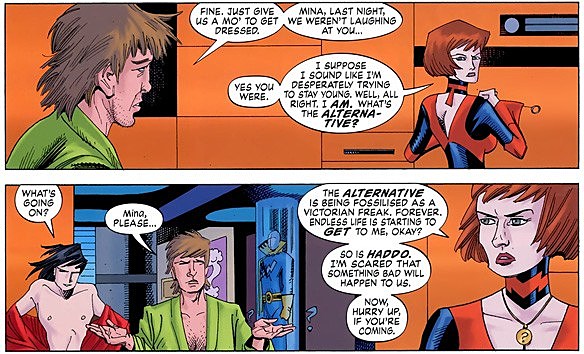 The problem is that this isn't really explored. I'm all for brevity in comics, and while it's fair to say that this is established an underlying theme of her character here, it feels neglected and unfinished. Even the fact that Mina has to say this out loud to the other characters is pretty close to Geoff Johnsian literalism that feels like it was put in for the sake of expedience, rather than allowing characters to build naturally. 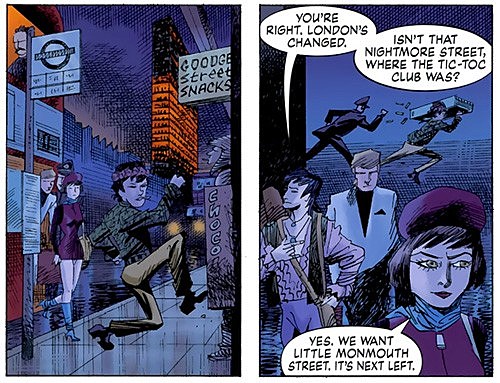 A scene of two characters discussing street names does not advance the plot. It feels like it should, because the names are distinctive and the characters are spending an entire panel being extremely specific about them, but in the end, they're irrelevant. They're just there to meet Moore and O'Neill's recommended daily allowance of Michael Moorcock references. Push it far enough, and you're just doing Family Guy for smart people.

And the entire book is like that, and the references only get more distracting as the book moves into a time frame where he's no longer working in the public domain. The verbal gymnastics Moore has to do in order to introduce characters that are under copyright verge on the ridiculous. And in the case of characters that are actually relevant to the plot -- like Lord Voldemort, whose introduction is complicated even for a guy who named himself after an anagram -- the obfuscation of those tricky copyrights is so obvious as to be distracting from what's going on.

It might stick out more for me now because I'm also reading Kim Newman's Anno Dracula, the masterpiece of the literary mash-up genre and an acknowledged influence on Moore and League. It's full of references like the ones Moore and O'Neill indulges, but even the ones that are veiled for trademark rights are presented in a way that makes them work in the story, with all the necessary information given to you in the context.

For instance, the plot of the novel is that rather than being killed, Dracula wins at the end of Dracula and then goes on to bite Queen Victoria and take over England. In a scene where someone is talking about running off to Africa because there aren't any vampires there, one of the characters corrects him by saying that not only are there vampires, but cites the well-respected vampire lord Prince Mamuwalde as an example.

It's a great reference, because it serves to underline a character's ignorance of life outside of his own country and his belief in stereotypes, and illustrates the fact that Dracula's reach extends far beyond England and Transylvania. All the information you need is presented to you in a way that flows naturally.

If you actually know who Prince Mamuwalde is, however... 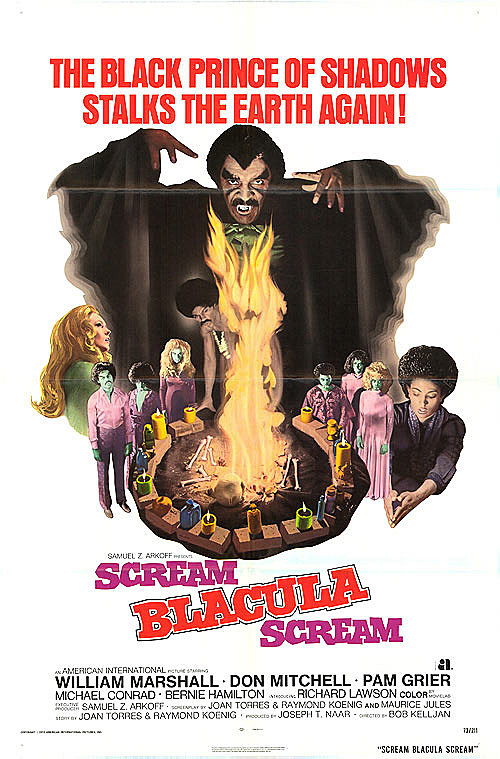 But in League, those references have taken over, crowding out story elements in favor of a world that exists not to serve a story, but just for the sake of existing. And again, there's a level on which it's truly fascinating. I love the idea of a world where all fiction happened and where real people have been replaced with the fictional analogues that were based on them, and I think it would be amazing to just sit around and listen to Alan Moore explain his ideas of how the world of fiction can work and come together. But as a story, it's collapsing under its own weight.

At this point, Jess Nevins darn near needs a co-writer credit for as indispensable as he's become in understanding the majority of what appears in these comics.

And of course, there are other problems too, relating purely to characters. As much as Mina's conflicts are glossed over, the other two main characters, Allan Quatermain and Orlando, barely contribute to the plot at all. They just sort of tag along, having things explained to them and eventually getting into a fight that Moore and O'Neill seem completely disinterested in depicting. They only serve as passive sounding boards, and while that turns out to be part of the point in the end, that passivity makes them boring. Everything that happens would've been the same if they'd stayed in the Blazing World and sent Mina out on her own, so why are they here?

Then there's the fact that this is yet another League of Extraordinary Gentlemen comic that prominently features rape as a plot device. You can easily explain it as being, like everything else in the comic, Moore's metatextual commentary on the use of rape as a plot device in fiction. At the end of the day, however, there's only so many times that you go to that well before your commentary just becomes part of what you're commenting on, especially when you're the writer with a track record of using sexual violence multiple times in your most prominent works.

But even that just points to the larger problem: In this volume, references no longer exist to serve the story. The story now exists only as a shaky framework on which to hang the references, and no matter how interesting those references may be, that doesn't make a good comic.