If you've rifled through a quarter bin any time in the past fifteen years, then you've probably seen your share of comics starring Prime, the flagship character of Malibu's short-lived Ultraverse imprint. Prime's career in comics was pretty brief, but in less than four years of publication, he managed to appear in a cartoon, get optioned for a movie that was in development as recently as 2004, and, most importantly, star in a video game.

Ultraverse: Prime came out for the Sega CD, and a version was also produced for the Super NES, but was never released. Fortunately for the curious, though, archivist Danny Cowan has the SNES version archived at his site. And having played it, I have to say: It's actually not bad, and has one of the most amazing theme songs ever. 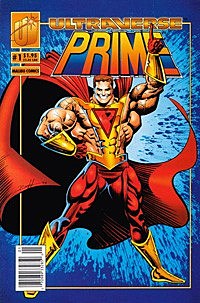 Don't get me wrong, it's not exactly what I'd call good either, but it's definitely the sort of game I would've rented for a weekend when I was 11 years old and had a pretty good time with.

Before we get to that, though, a little background on Prime: Created in 1993 by Bob Jacob, Gerard Jones, Len Strazewski, and Norm Breyfogle, Prime was essentially the Chromium Age answer to the Captain Marvel formula. According to Wikipedia -- which doesn't say how, or more importantly why -- 13-year-old Kevin Green has the extremely gross-sounding ability to to "project an organic 'liquid flesh' from his torso," forming a super-heroic body around him that was inspired by his own love of comic books. And since he was reading them in the early '90s, the body he ends up with is, of course, grotesquely Liefeldian.

So in case you were wondering, yes. He actually is supposed to look like that.

And that's pretty much everything I know about Prime. While it was coming out, I was way too caught up in the thrilling tension of the Rogue/Gambit relationship to read books without X-Men in them, so when I started playing through the game, I was hoping it would help me to catch up on the character. As it turns out, though, it's pretty long on questions and not all that into answering them.

As far as gameplay goes, Prime is a pretty standard side-scrolling Beat-'Em-Up in the mold of Final Fight, which shouldn't come as a surprise if you were playing video games in 1994. Most of the action-oriented comic book characters that made it to the Super NES did so through that style of game, including Superman, Sailor Moon, the Teenage Mutant Ninja Turtles, and most importantly, Spider-Man. Maximum Carnage, based on the Spider-Man storyline of the same name, was a big success; or at least, it seemed like a pretty big success to me, since I ended up wasting literal days of my life and a pretty hefty chunk of video game rental late fees trying to beat it.

But before you get to the action, there's a truly incomprehensible cutscene that looks like it was adapted straight from Breyfogle's art: 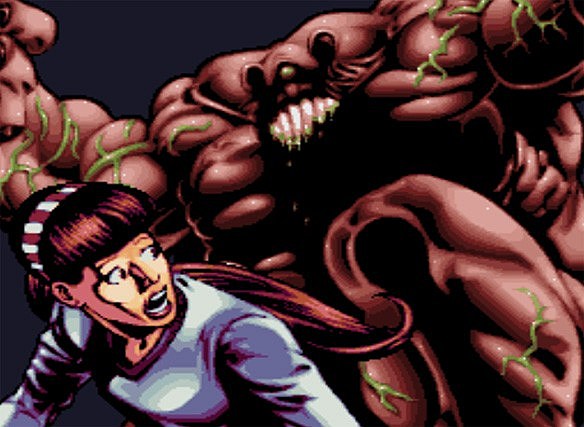 The thing is, at least in the incomplete SNES version, there's no dialogue or captions to explain just what the hell is going on, or why there is a woman being attacked by a giant, naked, veiny monster. I mean, there's a pretty obvious metaphor they might be going for here, so I guess we'll go with that. Kids, ask your parents.

Once that's done, the game starts you off in typical Beat-'Em-Up fashion on a city street, where you meet your first enemies. They are, of course, the scourge of any '90s super-hero: a gang of bulked-up thugs in tank tops. 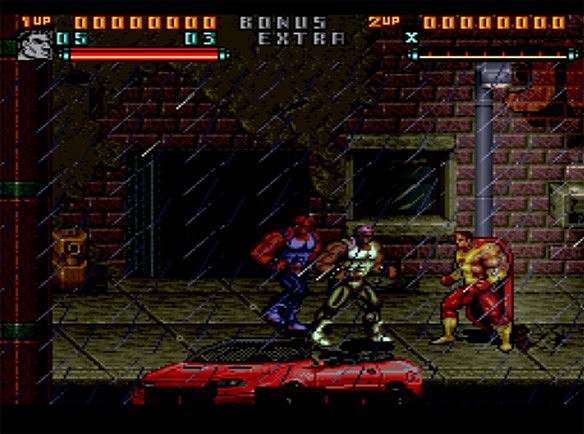 According to the life bars at the top of the screen, these Bad Dudes are named Arthur and Randy, and judging by how often they show up in the first three levels of this game, I'm going to guess that they were huge characters in the comic.

They're also your first opportunity to test out Prime's fighting abilities, and I have to say, Malibu Interactive did a pretty good job on that front. Maximum Carnage seems to be the bar they set out to beat, and while you don't get to whip people around with Spider-Man's webs, they do give Prime a few neat attacks to keep things interesting -- or as interesting as one of video games' most repetitive genres gets, anyway.

One button makes Prime punch, often with a combo that's a dead ringer for Cody's in Final Fight, but powered by ridiculously huge arms instead of ultra-tight acid wash jeans. And while you don't get to actually fly during any of the fighting levels, you do get a double jump that's useful in exactly one (1) area. Another button gives you an alternate kick attack that begins with the most awkward wind-up ever... 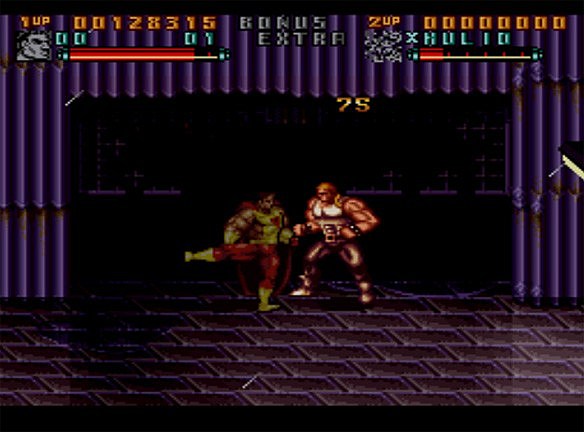 ...and ending with a stiff-leg kick square in the junk, complete with an impact burst exploding out of the bad guy's crotch: 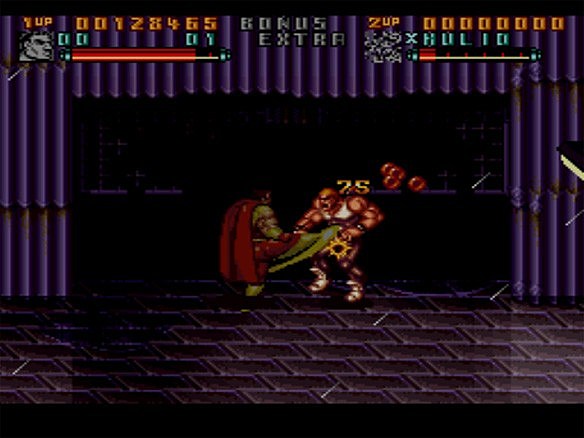 Surprisingly enough, that's not the most fun attack. That honor belongs to Prime's throw attacks. In addition to the standard chuck-an-enemy-across-the-screen, Prime also gives you the ability to throw them towards the background or foreground. It's a trick lifted from the later-era TMNT games, but they pull it off pretty well here by adding something that the comics of the era specialized in: explosions.

Explosions are a recurring theme in the game, and you get to most of them by throwing enemies at everything possible just to see what happens. The car in the foreground, the fire hydrant in the background and the windows on the building can all be broken when you toss an enemy at them, usually resulting in an explosion even when it's a fire hydrant. This makes no sense, but is pretty darn satisfying anyway. It's also pretty nice that the backgrounds have areas (like the windows and the occasional boarded-up door) that are destructible, although owing to the game's unfinished status, the destruction will occasionally result in a glowing purple square of nothingness.

So at this point, we've got guys in tank tops, crotch-kicks and exploding cars, and for the Streets of Rage aficionado, that's all pretty standard stuff. 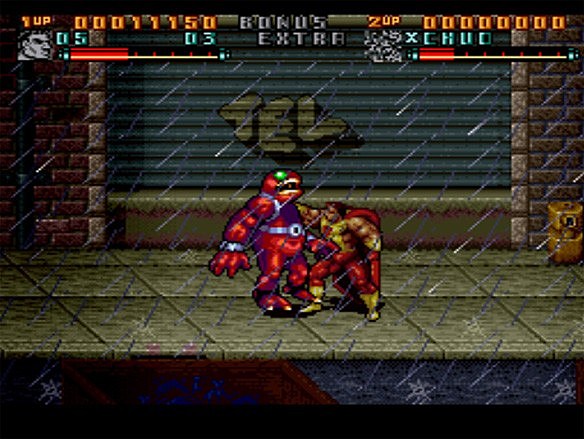 And then the CHUDS show up. 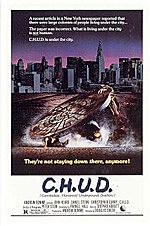 That's right, everybody: Cannibalistic Humanoid Underground Dwellers, as popularized in Douglas Cheek's 1984 film of the same name, which I am pretty sure was a documentary. In the game, they're a bunch of pot-bellied frog-lookin' dudes in various colors who accessorize with silver bracelets and belts, and pretty much serve to annoy the living crap out of whoever's playing the game.

The first time one showed up on the screen, I assumed that it was the same sort of weirdness that always crops up in video games, like how Maximum Carnage saw Spider-Man primarily battling against skaters who had somehow managed to weaponize long hair, but I don't think that's the case. This game was, after all, made by Malibu Interactive, an in-house video game developer that Malibu had acquired to do this exact thing. So presumably, we've learned something else about Prime: That dude fights CHUDs.

And those are the least weird villains that he runs into over the course of the game. In the second level, Prime drops down into the sewers (again, there's no dialogue, but I assume it's so that he can root out the CHUD threat at its source), where he runs afoul of the Gatomen. 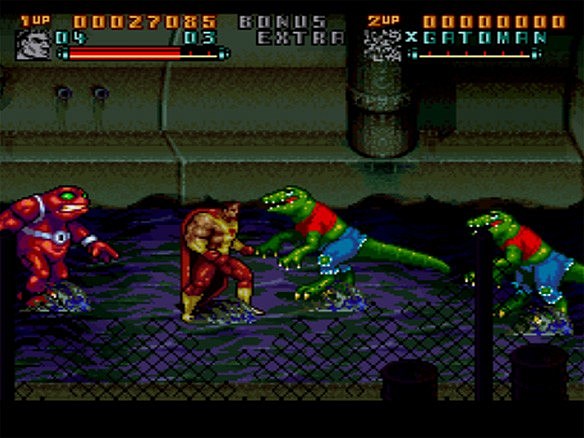 Despite my initial hope that they'd be Spanish-speaking cat people, the Gatomen are actually meant to be mutant sewer alligators, which still doesn't do a whole lot to explain why they look like the velociraptors from Jurassic Park and dress like Bart Simpson.

It's worth noting, though, that when you beat them up, they also explode. 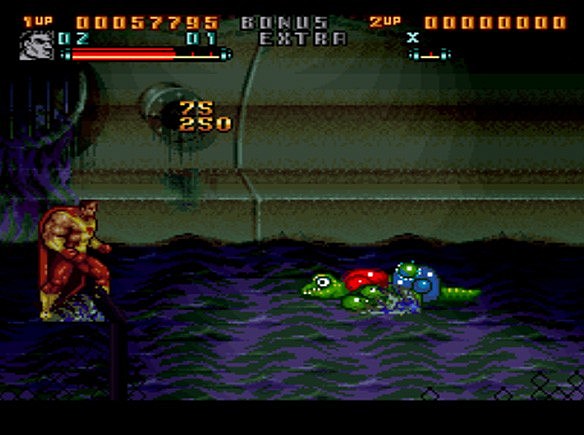 But it takes a back seat to what happens when you get to the next level. It's a science lab, so of course there's the occasional science, and these guys are so keen to explode that they don't even wait until you beat them up to do it. Instead, these guys just blow up their heads in a bizarre bloodsprey as soon as they see you, bursting out of their human forms into the shape of TENTACLE MONSTERS. 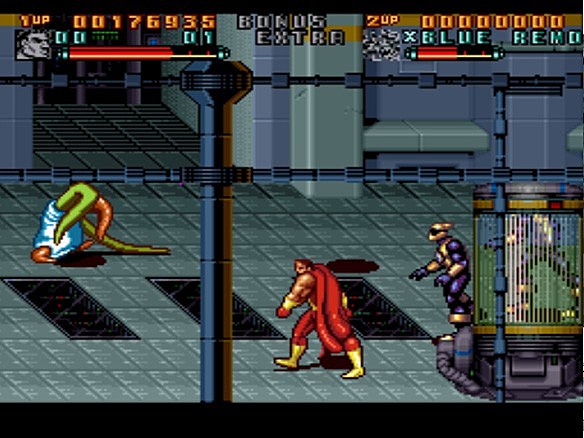 It might not be apparent in these screenshots, but those things are legitimately creepy as hell. They move around by just... flopping and dragging themselves, except they move super-fast. I kind of want to send footage of this game to the makers of Silent Hill and tell them "hey, that's how you do it."

There's one more villain that I think is worth mentioning, and that is this dude: 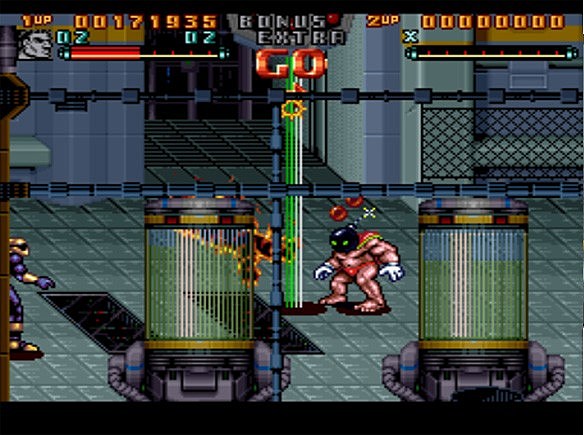 I didn't catch his name, but that, my friends, is a tiny little luchador in a cape whose head is a cartoon bomb. Marvel bought Malibu in 1995, and seriously, if they still own that guy, they need to bring him back immediately, if not sooner.

Fortunately, we can all take comfort in the fact that Prime is equipped with two special abilities that allow him to deal with these horrors. For one, as seen above, he walks just like WWE chairman Vince McMahon. And for the second, his super attack, which allows him to blow up like a balloon until he explodes. 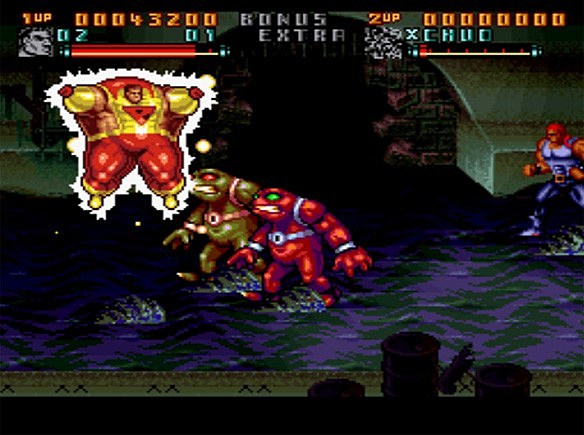 Once gain, I have no idea if this is something that actually happens in the comic, but I think it has to be. That art is just too detailed to not be based on something outside the game, and since it predates the Internet fetish communities that would go on to produce a drawing like that for every super-hero, it's gotta be from the comic.

Eventually, you explode at enough CHUDs that you reach a boss monster, which happened twice before the game hit an area that it wasn't programmed to finish. The second was a cameo appearance by fellow Ultraverse hero Prototype, who was defeated by punching him until he collapsed into a cloud of glittery pinnk dust (really), but the other... was Organism. 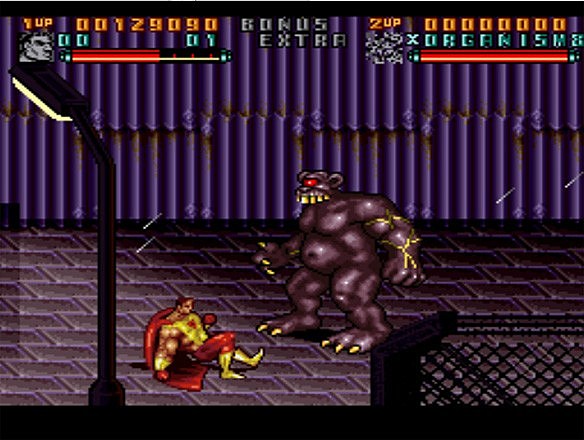 A buck-toothed, cycloptic, purple teddy bear. And when you beat him, this happens: 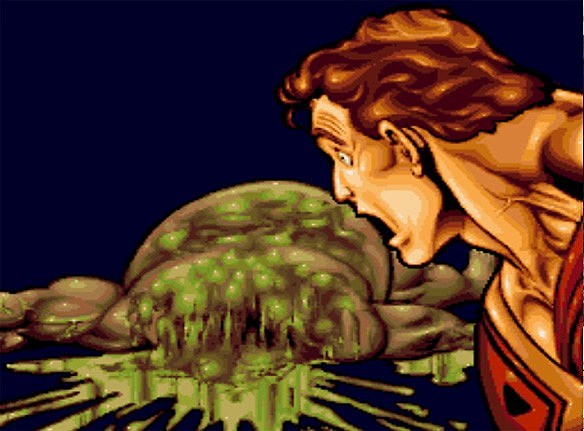 Don't look at me, Prime. I'm as confused as you are by this turn of events.

In the end, it's like I said: It's not that bad a game, and for the 900th unnecessary licensed Beat-'Em-Up for the Super NES, it would've acquitted itself pretty nicely. It does, however, lack the one thing that made the legendarily bad Sega CD version worth playing: The Theme Song.

The SNES version doesn't have sound, but my entire interest in the fact that there was a Prime video game started when my pal CJ informed me that the Sega CD version contains a seven-minute ode to Prime that must be heard to be believed.

This is, and I am not joking, one of the greatest songs I have ever heard in my entire life. Not only does this provide us with the greatest catchphrase ever -- "he's gonna get himself some justice" -- it gives us the super-soulful, Doors-esque "Prime to deliver the good from the bad."

Stick around for the flute solo. It's worth it.