Q: With the baseball playoffs underway, do any stories standout in your mind involving the national pastime? -- Protoculture27

A: Read comics long enough, and the fact of the matter is, you're gonna see some baseball sooner or later. I mean, despite the fact that they dabbled in half-court hoops in the '90s, I'm pretty sure there was a stretch in the '80s where the X-Men were on the baseball field more often than they were in the Danger Room. 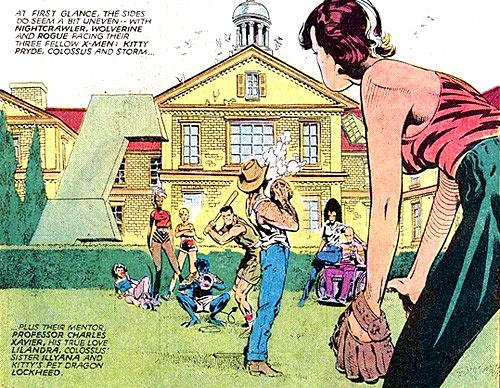 But as for baseball-themed stories that are especially good, well, there actually are a couple that spring to mind.

The first one that comes to mind is appeared courtesy of Bob Rozakis and Dick Dillin in the pages of DC's Super-Stars Giant #10, where it's billed as an installment of Strange Sports Stories. And brother, does it live up to the name. 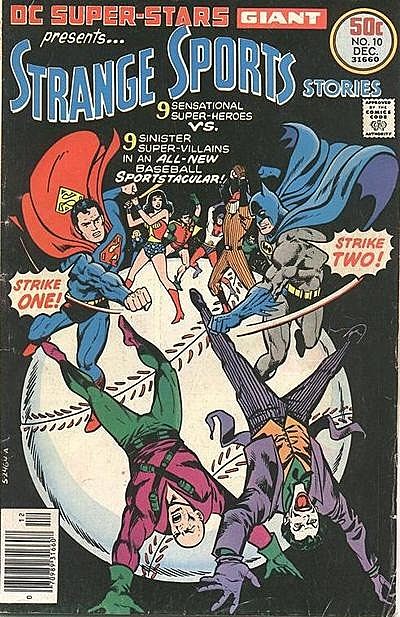 Before I get into the interiors, I just want to say that this cover -- by the great Ernie Chan -- is one of my all-time favorites. Not only does it feature the word "Sportstacular," but just look at the Joker. He is stoked to be getting chin-checked off a giant baseball. Flip it upside down, and he and Lex Luthor look like they're on a rollercoaster.

As for the story, it is completely, gloriously insane. The whole thing gets started when the Golden Age Huntress (later known as Tigress) and her husband and habitual Alan Scott punching bag The Sportsmaster are having an argument about her career. She's tired of being trounced by the forces of good and wants to give up the super-villain life to make a go at being a hero, while he wants them to remain firmly rooted in a life of crime. After all, the couple that commits intricate, thematic robberies together... stays together.

It's worth pointing out that they are having this argument at their home in the suburbs, and yet they are both in full costume:

In order to convince her to keep it crooked, the Sportsmaster suggests that they get the Justice League to play against a team of super-villains in a game of no-powers baseball, which is without question in the top five craziest plots I have ever seen in a Silver Age comic. It makes absolutely no sense, and yet, it makes perfect sense at the same time. This is the Sportsmaster we're talking about; it's not like he was going to come up with a solution that didn't involve sports.

Sportsmaster ends up using a machine to zap the heroes and villains to a baseball field -- which is completely unexplained, as you'd think a machine that could zap people from one place to another would've come in handy during his crimes -- and lays out the deal. Nine innings, no powers, heroes against villains in a straight-up baseball game. And the best part? Everyone totally agrees.

There is, of course, the pretty much mandatory cheating on the part of the bad guys... 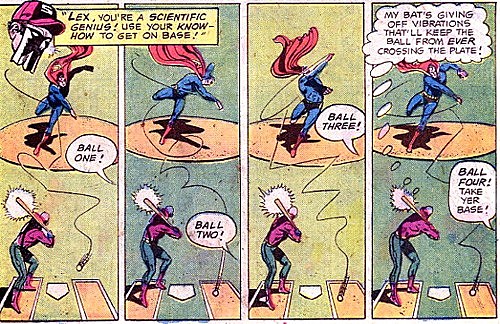 ...but the heroes manage to totally demolish them, winning 21 to 11. And I know this because of the absolute craziest thing about this issue: They published an actual all-text play-by-play at the end of the story: 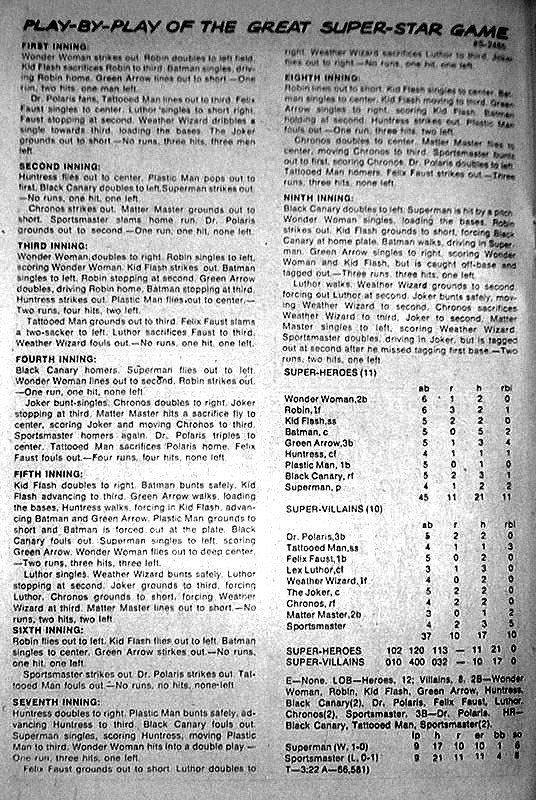 Because why represent these thrilling moments visually when you could do it in text? Although oddly enough, if you look closely this is the page that slash fiction writers have been wondering about for years: Superman's the pitcher, Batman's the catcher. I know, I was surprised too.

As crazy as that story is, though, my favorite use of baseball in comics comes from Jeff Parker and Ig Guara in Marvel Adventures Avengers #26: 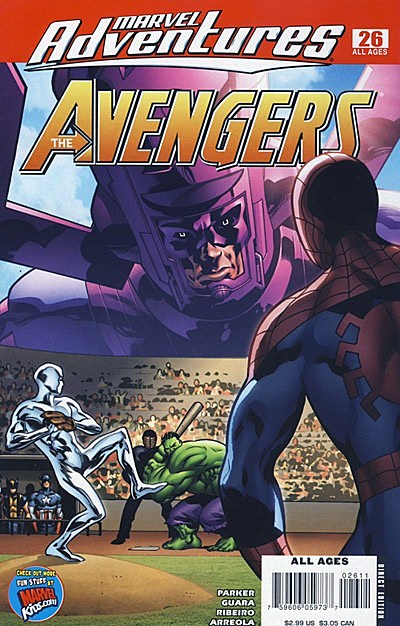 I've talked before about my pure, undying love for the Parker's (and later, Paul Tobin's) Marvel Adventures Avengers run, and the best thing about it is that they were allowed to do stories that embraced the inherent silliness of super-heroes, but were still good stories. This was, after all, the run that brought you the Avengers being turned into MODOKs and Ego the Living Planet developing a crush on our sexy, sexy Earth, but this issue is downright Looney Tunesian.

It's actually a sequel to the events of Fantastic Four #48 - 50, with a group of aliens coming to earth to borrow the Ultimate Nullifier in order to keep Galactus from eating their planet, unaware that, as Hank Pym explains to them, Reed Richards gave the Nullifier back to Galactus after their encounter:

Incidentally, Reed's Southern accent in this panel might actually be the best thing ever. Jury's still out, I'll keep you guys posted.

Anyway, the Avengers being the Avengers, they volunteer to go to the imperiled planet and lend a hand anyway, which involves Pym sending giant alien ants to Galactus's ship to get the Ultimate Nullifier back. And this, I think, is when Parker was seized by the spirit of Chuck Jones: 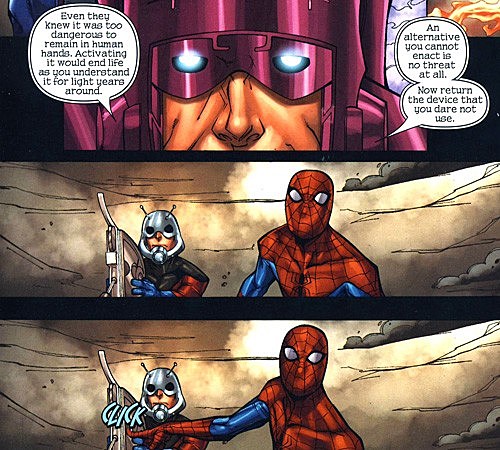 I love that sequence so much.

See, Spider-Man figured out that the Ultimate Nullifier would just level the playing field, equalizing everyone's powers and nullifying their various advantages and disadvantages, leaving the Avengers and Big G to figure out a way to settle their differences. Thus, Baseball. IN SPACE. 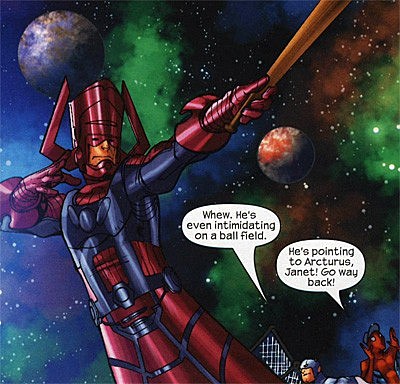 (OK, OK, actually first they try Chess and later move on to Texas Hold 'Em, but nobody asked me about those this week, so that's not what I'm going to talk about.)

Despite the fact that it made for a striking enough image to get on the cover, the entirety of baseball content only lasts about two pages. Still, it's a high point of the issue, especially once Ant-Man takes the pitcher's mound... 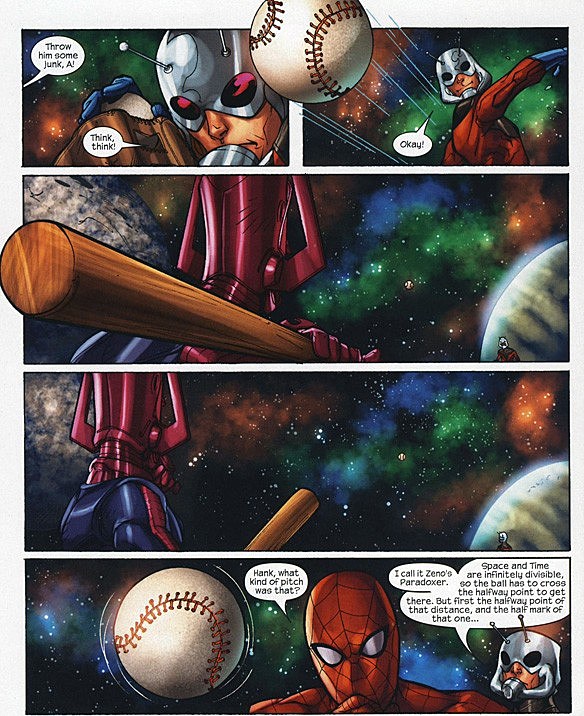 ...to throw the Zeno's Paradoxer.

Both stories are tons of fun, and they'll probably stand as my favorite uses of America's pastime in comics until the Matt Fraction/Gabriel Ba biography of Kenny Powers becomes a reality, rather than something I just made up.

Q: Who are you voting for in this Legion election and why? -- adampknave

Q: What is your take on the Legion election? -- wndola

Q: Who are you backing in the Legion Elections? -- thetallman_Z

Q: Who are you voting for as Legion Leader? -- erkalbeleo

A: For those of you who don't know, it's election season for the Legion of Super-Heroes. The twist is that instead of the characters themselves choosing a new leader, the 31st Century's greatest heroes have opened it up to let readers decide with an online vote that's open until November 10.

It's a pretty neat idea -- and I believe it's one that the Legion books has done before -- but as much as I'm a fan of the franchise, I haven't been keeping up with the book lately, and I was planning on sitting this one out. Of course, that was before my pal Kevin Church made a pretty impressive argument for one of the most underused Legionnaires ever: Quislet! 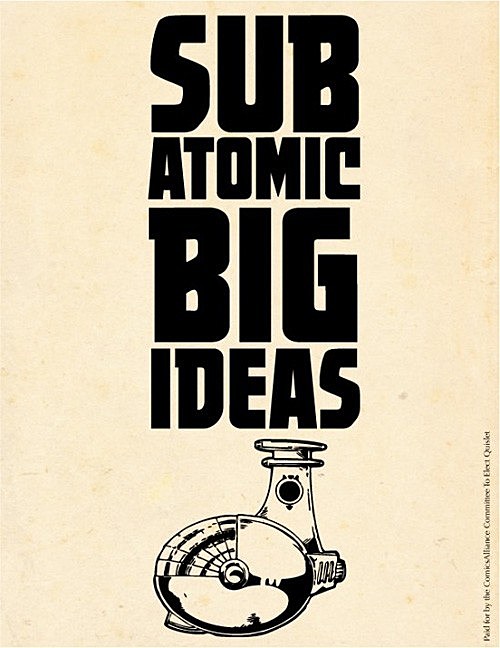 If you ask me, the 31st Century could use the kind of fresh ideas you get from an intangible energy-being from an alternate dimension that flies around in a tiny spaceship and possesses electronics.

I was all set to throw my support behind the honorable gentleman (?) from Teall, but then my other friend Bully the Little Stuffed Bull made an even more impassioned argument for another stalwart Legionnaire who actually has political experience: Matter Eater Lad! 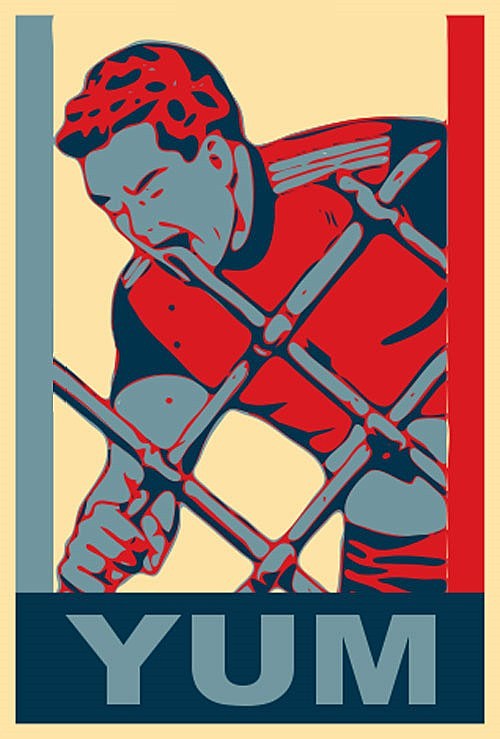 Unfortunately, in what I can only assume was meant to be a grave insult to the people of Bismoll, Matter Eater Lad was left off the current ballot, and that is ridiculous. Did any of the other candidates have Guided By Voices write a a song about them (Warning: a bit of salty language at the end that might be NSFW)? I think not!

The omission of Matter Eater Lad made me realize that as long as we keep supporting the corrupt political system that's in place, we're never going to get away from the same kind of Legion leaders that we've always gotten from Braal and Titan. That's why I say that this year, we send a message to those fat-cats in Earthgov and the UP and work to elect someone with integrity. Someone who stood up to Computo when no one else would. Someone with three heads. 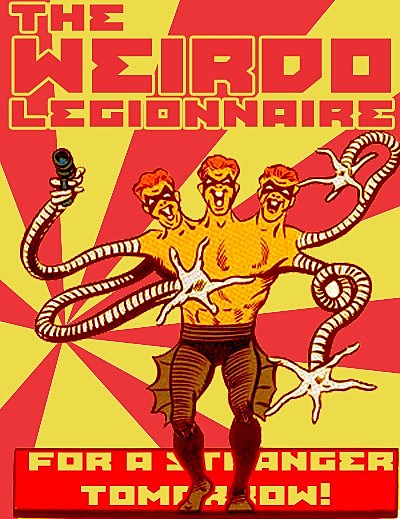 This year, Vote Weirdo, everybody!

And now, some quick answers:

Q: What superhero would make a good Luchador? -- KevinInChains

A: This one's going to require some thinking. I mean, is there any character in comics known for his agility, with super-powers that would allow him to perform complex grabs and throws, who wears a full face-mask and actually wrestled in his first appearance? 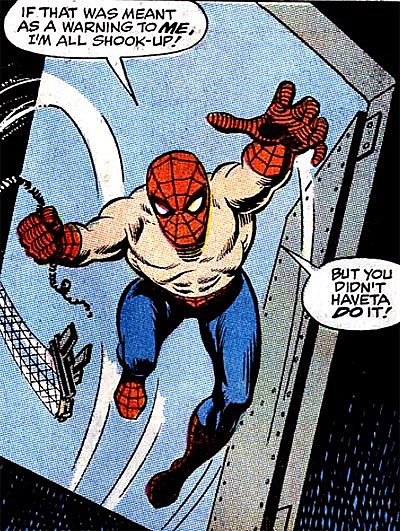 Huh. Seems like there'd be some character who'd fit that bill, but I just can't think of anyone. Sorry!