A: First of all, Kevin, Archie's Weird Mysteries, the TV tie-in comic from 2000 that mashed up Riverdale with the X-Files, was fantastic. The one where Veronica found out she was "The Ender" spoken of in vampiric prophecy as the one who would use an ancient amulet to eradicate the scourge of the undead from fictional Massachusetts is an underrated classic, and for those of you wondering, I'm not kidding. That story exists. 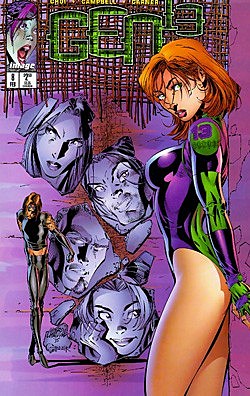 For those of you who may not be familiar with the franchise, Gen 13 was one of the hottest comics of 1995. In fact, there was a time when Gen 13 was my absolute favorite comic book. What? It was a different time! And I wouldn't get my first copy of The Dark Knight Returns until the summer of '96.

Here's the high concept: A team of teenage mutants gen-active super-powered beings led by a curmudgeonly old mentor with male pattern baldness one eye and a totally wicked scar escaped from government custody and went about fighting evil to protect a world that... well, the world was actually pretty indifferent to them, actually.

If that sounds familiar, it's because was basically an absolutely shameless ripoff of the X-Men, but with everything about it jacked up on that Chinese drug that they poison Jason Statham with in Crank. In the first six months of the ongoing series, Gen 13 threw in sexy teenage lesbians, super-heroes being kidnapped by an island of Amazons and used as breeding stock, a character based on Bruce Campbell who battled said Amazons with homemade land mines, a secret order of Vatican assassins who wore corsets and thigh-high leather boots (shout out to Jim Lee), and a gang of pirates. Actual f***ing pirates, with a Spanish galleon sporting eight Jolly Rogers. And they all lived in a house with a sexy housekeeper named Anna in a French Maid getup.

You know what? I take back all the excuses I made for thinking this book was awesome when I was 13. It is, without question, the perfect comic book to love when you're in 7th grade.

So needless to say, those first issues set the bar pretty high in terms of sheer unapologetic stupidity. And then, in a two part story in #8 and 9, Brandon Choi, J. Scott Campbell and Humberto Ramos flat-out shattered their previous record for ridiculousness by trying their collective hand at horror. Or at least horror-themed camp.

You may want to get out your Cliche Checklist for this one: Our story begins in the Hall of Mirrors at one of the four thousand Abandoned Carnivals that chamber of commerce starts constructing whenever a super-hero moves to town. The reason the Gen 13 -- who are actually just five people -- are exploring such a Scoobydoovian location? Their leader, the frequently naked Caitlin Fairchild, has been abducted by an evil circus with the supremely imaginative name of... the Freak Show!

Aside from a brief flashback where tension between characters is created when Roxy tells Grunge that he looks like a "gaybot" in front of Rainmaker (a lesbian), this is pretty much how the entire issue goes. One by one, the characters square off against (and get their asses handed to them by) the freaks, and each one is more of a cliche than the last. There's the Master Blaster-esque Baby & Doll: 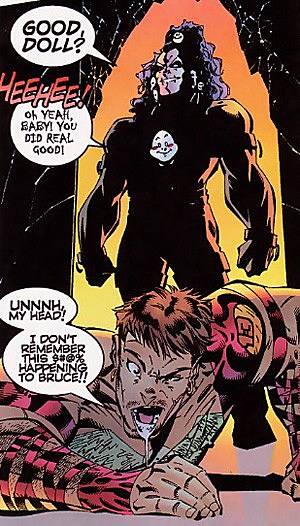 Nymph, an alluring (read: naked) siren who takes out the Dollar Store version of the Human Torch that is Burnout, because she's made of water and he's an idiot: 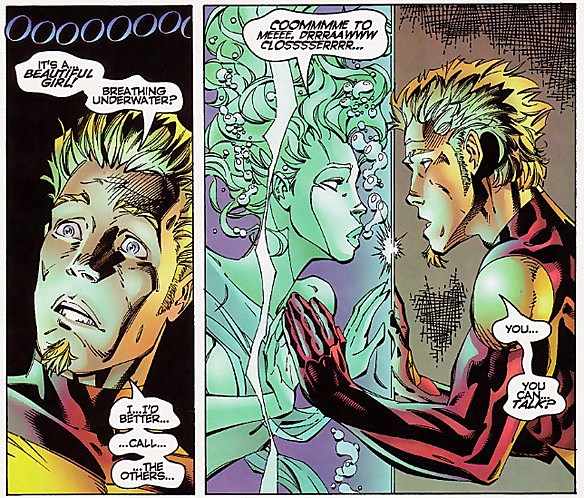 The Albino, based on the old sideshow mainstay of the rubber man, who can endure Rainmaker's lightning bolts (and also pull off one of the book's most thorough gropes) because he's actually made of rubber: 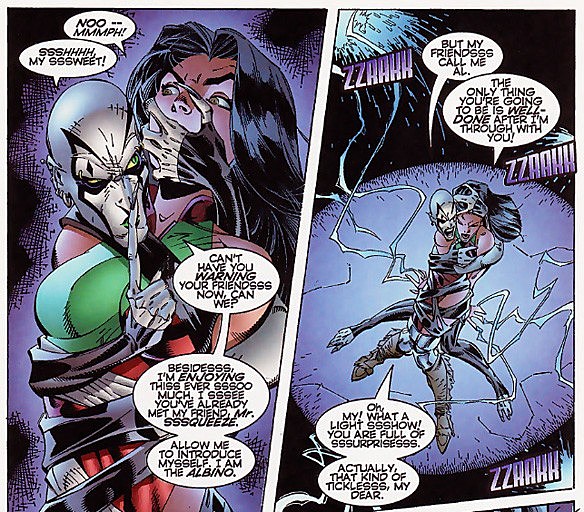 Phobia, not to be confused with the DC villain of the exact same name and powers, who represents a heated battle between the scripts desire to hit cliche bingo with the "creepy little girl" trope and J. Scott Campbell's instinct to draw an upskirt shot for every single female character in the comic:

And of course, Caitlin herself, who has of course been mind-controlled into a version of herself so evil that she has gained Nikki Sixx's haircut: 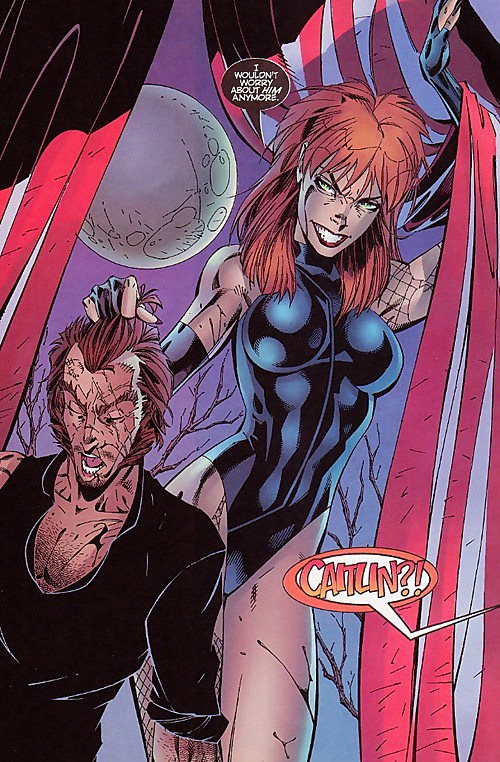 What could have possibly tuned such a pillar of goodness and two-shoesery into someone who looks like she's one streak of face paint away from plotting to get Jem and the Holograms kicked off their label?

That would be due to the sinister machinations of the Freak Show's leader, Trance, who is hilarious. Seriously, just look at this dude: 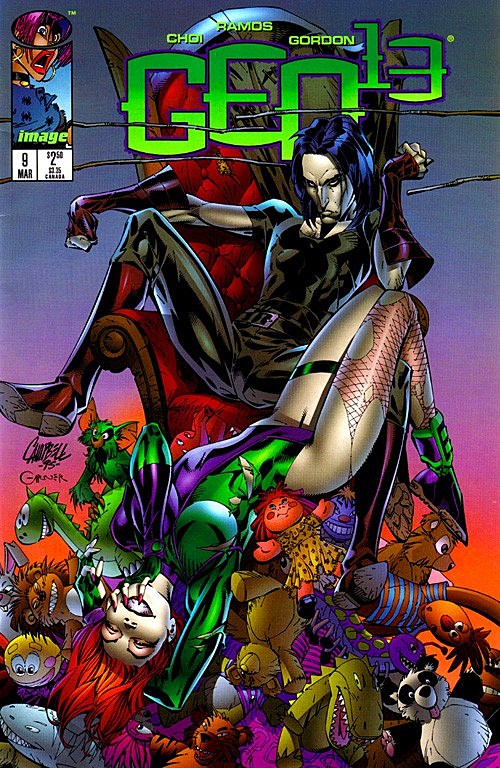 As confirmed in the letters page a few issues later, Trance (get it? Because it's a type of music and a word that kind of means brainwashing people with psychic powers?) was visually based on Trent Reznor of Nine Inch Nails fame, but with Campbell drawing him so ridiculously weedy that he failed to look threatening even when he was standing next to Burnout and his dumb soul patch. Oh, an for those of you still keeping score, you can mark of "creepy pile of dolls" too, even if the overall effect here is about as frightening as a Toy Story themed SuicideGirls™ shoot.

Anyway, it turns out that Trance didn't want Caitlin at all -- she's just a super-strong, super-stacked bonus that came along with the real object of his quest: 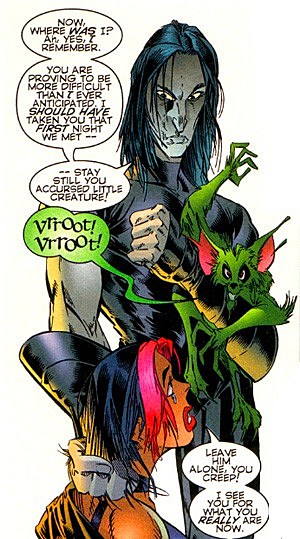 Lockheed! I mean, Qeelocke, Roxy's mysterious pet monkey cat thing who in no way infringes on any copyrights that may or may not be held by Marvel Comics. At all. Honest.

I read this thing a hundred times when I was a kid -- well, I mostly looked at Campbell and Ramos's shapely lady drawings, but I can assure you I paid very close attention to those -- and I still have no idea why Trance wanted Queelocke. He mentions something about bounty hunters and raising an army, which seems like a pretty lofty goal for a dude who's living in an abandoned carnival, but I guess a dude has to find something to do on the 361 days out of the year that aren't the Gathering of the Juggalos.

Unfortunately for him, Qeelocke has the power to open boom tubes (which I don't think anyone had mentioned before), and he does just that, summoning Anna the Maid, who promptly punches Trance into the next county: 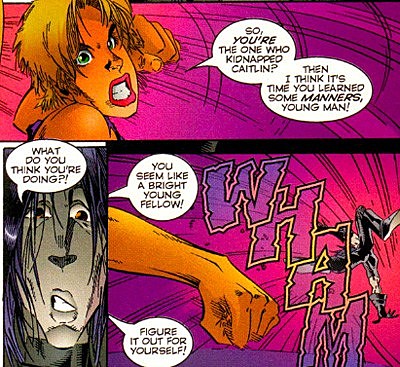 Because she's a robot. Surprise!

And that's pretty much how this little adventure ends. Without Trance to keep Caitlin in line, the rest of the team rallies and beats up the bad guys in like two pages. I mean, you also find out that Caitlin and Roxy are long lost sisters and that their father is a pirate king in the South China Sea, but yeah, mainly it's just that a robot shows up and punches Trent Reznor.

There is, however, one piece of the story that I haven't mentioned: How Trance got to Caitlin in the first place. 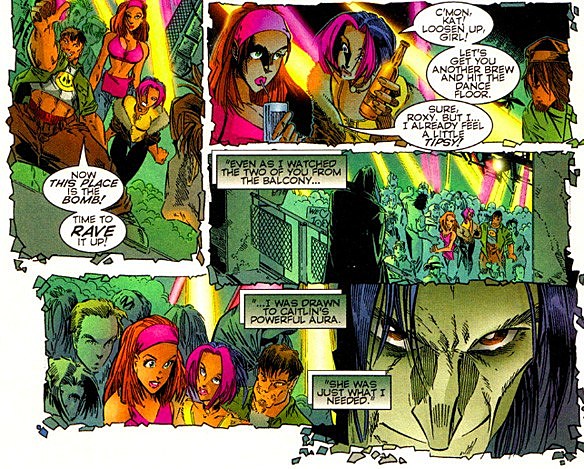 That's right, everybody: The real scary part of this story is the scourge of underage teenage alcohol raves!!

So congratulations, Gen 13 #9: You are officially the single dumbest After School Special on record. And that's saying something.

Q: Besides Dracula, who is the best vampire in comic books? -- 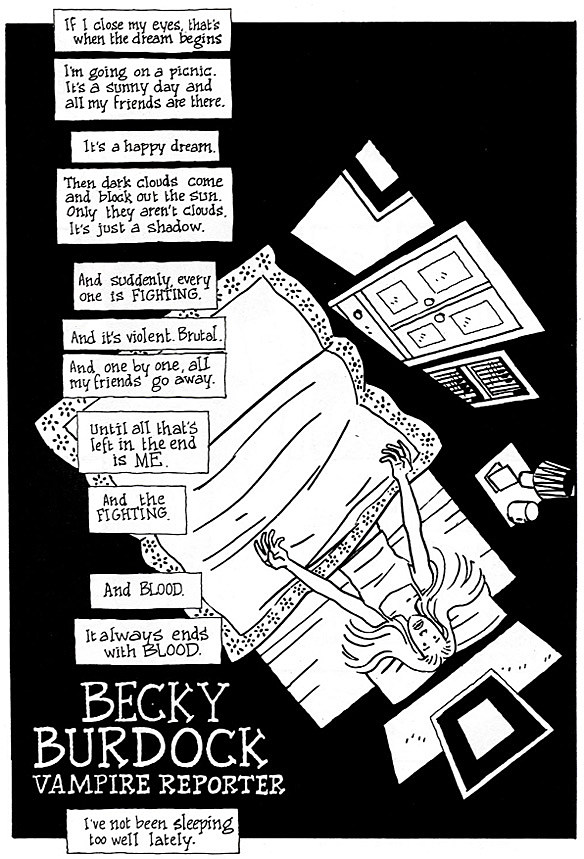 That's all for this spooooky season of Ask Chris! To ask your own question, send it to @theisb on Twitter with the hashtag #AskChris, and have a Happy Halloween!