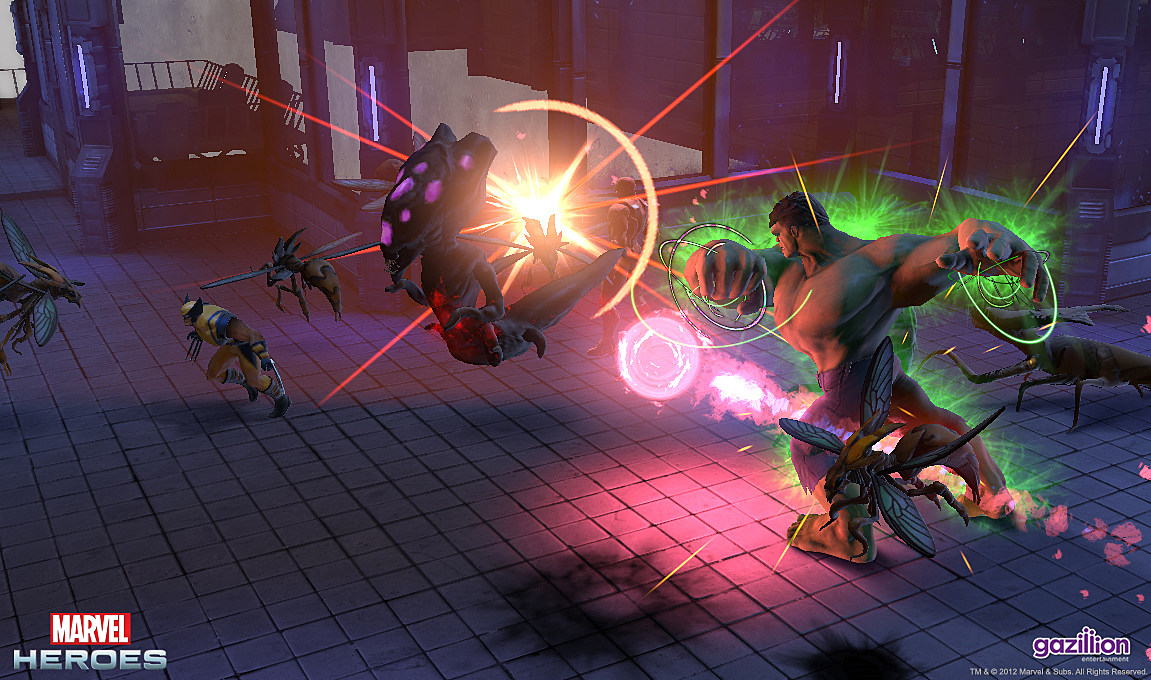 One of the highlights of San Diego Comic-Con for Marvel gaming fans was the debut of the much-anticipated free-to-play MMO action RPG, Marvel Heroes in playable form. I asked the developer Gazillion's Director of Community, Stephen Reid, why they didn't show the game at E3 and he replied, "Because we wanted it to debut it where the fans are." I had a chance to stop by the Marvel booth to get some extended hands-on time with the game demo as well as get a few questions answered by the "Father of Diablo," Gazillion COO, David Brevik. 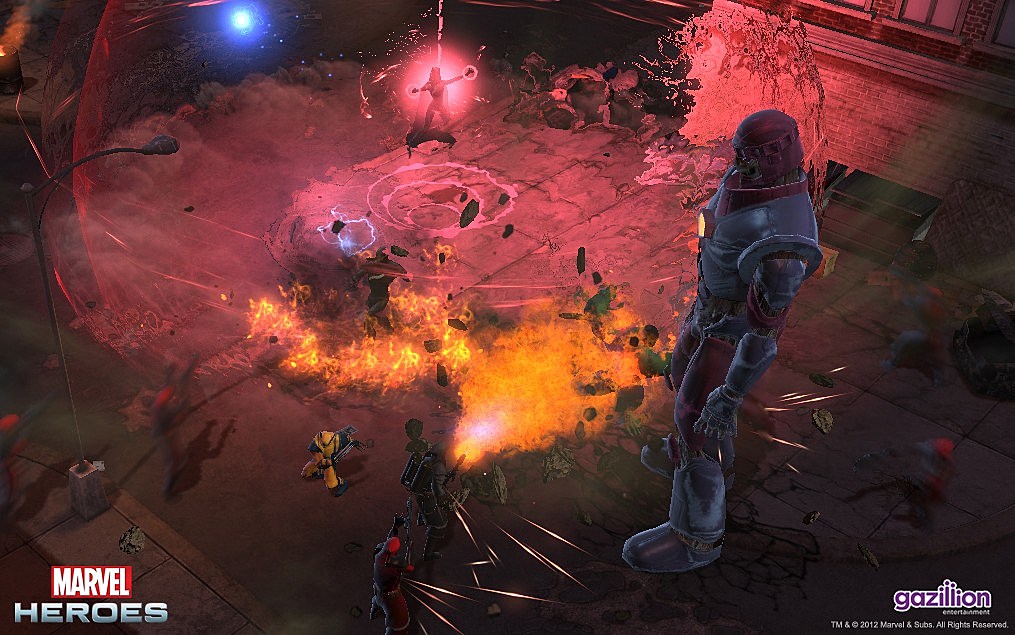 Unlike other traditional massively multiplayer superhero RPGs, such as DC Universe Online, Marvel Heroes is an action-RPG title that plays very similarly to Blizzard Entertainment's Diablo franchise. More specifically, you click to kill lots of things, and get rewarded with some phat loots for doing so. The twist this time around, obviously, is that you get to do so with your favorite Marvel heroes, rather than creating one from a milquetoast character template.

Marvel fans should be very encouraged to hear that Gazillion brought the big guns from Marvel on board to work on the game: Mastermind of the Avengers titles, Brian Michael Bendis scripted over an hour of motion comic cutscenes as well as plotted the game's overall story arc. Art duties for those cutscenes will be handled by a variety of established Marvel artists, the first of which Gazillion revealed to be Ron Lim (Silver Surfer). While voiceover casting has yet to be completed, the developers assured me that they would be looking for actors who had previous experience portraying heroes. I got a short glimpse of one of the first Ron Lim-drawn motion comic cutscenes and it looked very sharp and beautifully animated. 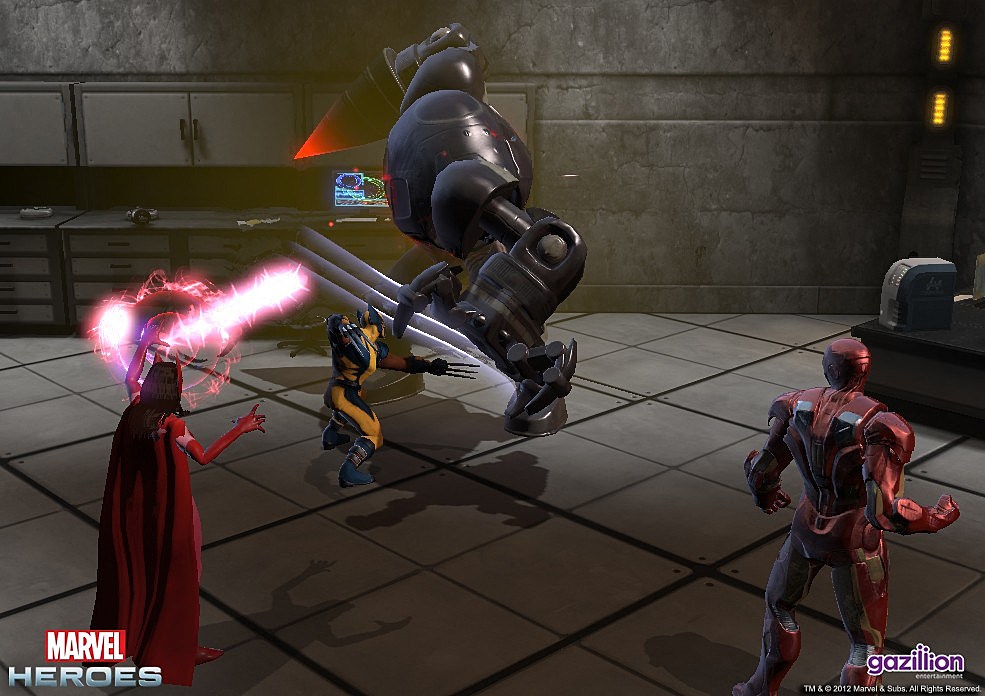 The SDCC demo of the game ran about 10 minutes long in real time, but was actually a time-condensed version of gameplay that will take much longer to complete in the final version. Four characters were playable: Iron Man, Hulk, Scarlet Witch, and Wolverine. Since I was standing pretty close to the Iron Man Hall of Armor display at the Marvel booth, I decided to start my run through with Iron Man. I found Marvel Heroes very easy to pick up and start playing right away. Left-clicking both moves the character and unleashes a primary attack while pressing the ASDF keys gave me access to other abilities. Iron Man has all the attacks you would expect him to have, such as the unibeam laser or repulsor blasts along with the compulsory punches and kicks. Brevik made sure to point out using certain abilities in succession would result in a unique combo attack. He promised that there would be a high number of discoverable combo attacks and that the game would try to guide the player in discovering them.

The other important note about your roster of heroes is that you are free to switch to any hero on your account whenever you want -- without having to log out. You still have to be aware that your characters will have to battle in whatever part of the game you are in at the moment, so if you're wanting to switch your Level 50 Wolverine to your Level 3 Black Panther near the endgame, you're probably going to have difficulties. But if your characters are within reasonable level ranges, you'll be fine. With over 17 announced characters, and hundreds from the Marvel vaults to choose from potentially, it certainly sounds like Marvel Heroes will be a compulsive altaholics's fondest desire.

Gameplay began in the X-Mansion, which acts as the first quest hub. Since it was a demo build, most of the mansion was non-interactive along and the other X-Men scattered around were simply placeholder models. Professor X gave the lone quest to capture William Stryker and off I went through a portal to fight some Purifiers. 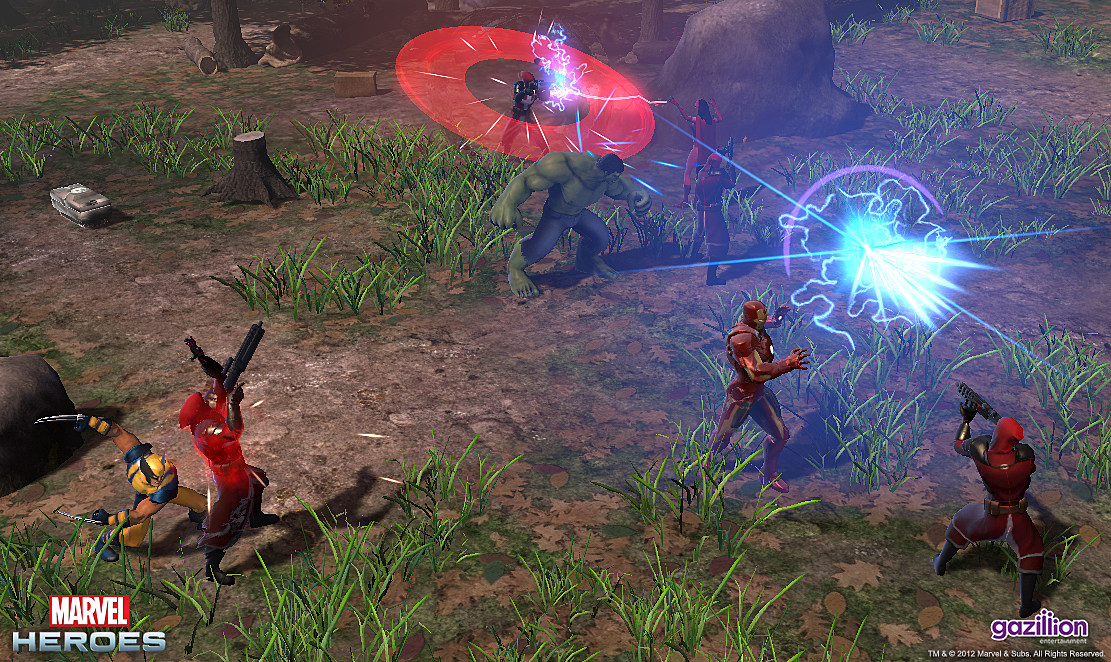 While it's possible to play the game solo or with a small party of friends, Marvel Heroes is an MMO after all and Gazillion has designated certain environments as "social zones" where players are able to see and play with other heroes. The first combat area in the demo was in Mutant Town where the Purifiers harassing the citizens. During the demo, I ran across a couple of other players playing the game from other parts of the Marvel booth, but was unable to interact with them much, as the social features aren't in the game yet. Brevik mentioned that some enemy encounters, such as the giant Sentinel I fought in the demo, would be best tackled by teaming up with other players in the same area as you. He downplayed the importance of having the traditional MMORPG "holy trinity" of a tank, healer, and DPS in lieu of creating a more flexible cooperative system that would really make the player feel like a genuine superhero team up is happening in the game.

There are also instanced areas for important encounters, such as bosses, to limit the need for monster camping. After progressing through Mutant Town, I found Stryker, but he was already in the clutches of Magneto. You can probably predict that a boss encounter happened shortly afterward. The encounter was simple without being eye-rollingly easy. I had to dodge a charged up area of effect attack while also being admonished by Brevik to "not to stand in fire." As a former World of Warcraft raider, I felt extremely ashamed to have to be told that by a former Blizzard employee. 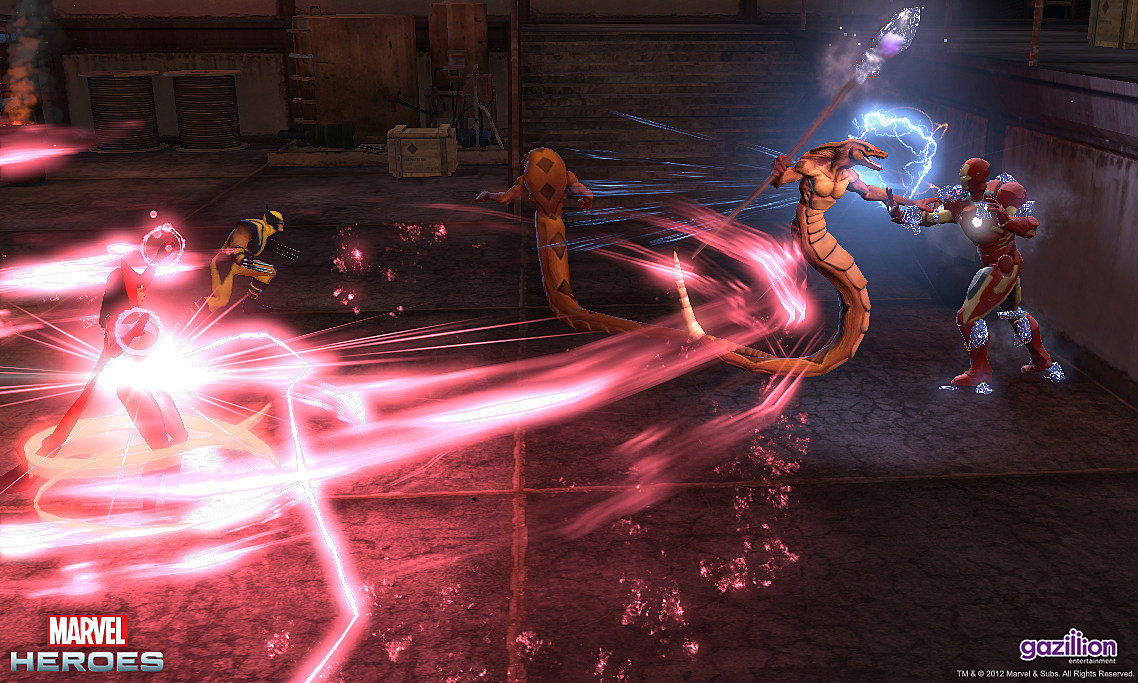 Defeating Magneto sprung a loot piñata of multi-colored treasures. While the demo contained just placeholder items (not sure "ye old leather tunic" is something that Iron Man would wear), Gazillion assured that the loot system would be robust. Along with traditional equipment slots, Gazillion noted that there would be a costume crafting system in place to change the outward appearance of your heroes. Their goal was to have an equipment system that wouldn't result in the heroes looking like clowns from mismatched gear pieces. Thus, while equipped items affect your stats and skills, they won't change your appearance at all. Those afraid of ninja looters and griefing from strangers need not worry -- all loot is automatically distributed to each player, limiting any drama that might occur from jerks being jerks.

The most surprising element of Marvel Heroes to me was that Gazillion plans on making the entire game free-to-play. Even in the game's early development state, the gameplay felt smooth while also having some elements of AAA title quality presentation, such as the motion comic cutscenes and quality voice acting. If they were planning on charging either a monthly fee or retail price for the title, let's just say that no one would blink twice. David Brevik made it a point to say that they were not interested in "nickel and diming" players.

As it stands, though, Marvel Heroes is a game that should be squarely in your radar if you're a fan of action RPGs and/or Marvel superheroes. The fact that it will be free is something that you should look at as an extreme bonus. Gazillion also plans to evolve the game post-launch with new playable characters and missions that could coincide with what is currently going on in the "real" Marvel Universe in the comics. While the game is currently being developed for the PC only, but Brevik noted that a Mac version would be their next platform for release.