Q: What is your favorite superhero wedding of all time? (I'm pretty sure you're either going to go with Reed & Sue Richards or Big Barda & Mister Miracle but I look forward to your answer nonetheless). -- K.D., via email

A: If you're a regular reader of this column, you'll probably be aware that telling people that they're wrong is one of my greatest joys in life. This time, though, it's a little bittersweet, because you are severely overestimating my tastes. 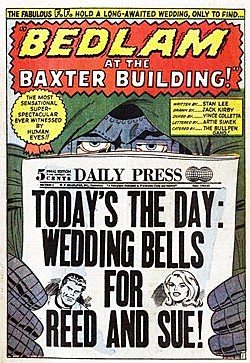 If you'd asked about the best, then -- as you suspected -- the title would've unquestionably gone to Reed Richards and Sue Storm's wedding in Fantastic Four Annual #3. Like most of the things that Stan Lee and Jack Kirby did in their run on FF, that one set the standard that everyone else would spend the next fifty years trying to live up to.

It's still one of the biggest bang-for-your-buck comics of all time. As befitting their status as the center of the Marvel Universe, the Fantastic Four had a wedding that involved everyone. The idea that Dr. Doom would read about Reed and Sue's nuptials in the paper and get so mad at the possibility that his nemesis was going to have a nice, happy day that he got everyone from the Mole Man to Hydra to the Mad Thinker and his Awesome Android to go ruin things is pretty close to being the ultimate example of a super-villain dick move. And it just gets bigger and bolder on every page as Spider-Man, Daredevil, the Avengers, the X-Men, Dr. Strange and pretty much every other hero in the Marvel Universe show up to help out. It's not just the template for the big super-hero wedding, it's one of the first real capital-E Event comics. And it's great.

Plus, Lee and Kirby showing up to be labeled as wedding crashers and kicked out of their own creations' wedding is probably the most purely Marvel Comics moment that has ever happened.

But as much as I love that issue, and as much as I'd say that it's objectively the best wedding story in comics, it's not my favorite. That honor -- such as it is -- actually goes to another story, and in my head, I'm pretty sure that it's not very good. I don't care. I love it anyway.

It's X-Men #30: The Wedding of Scott Summers and Jean Grey. 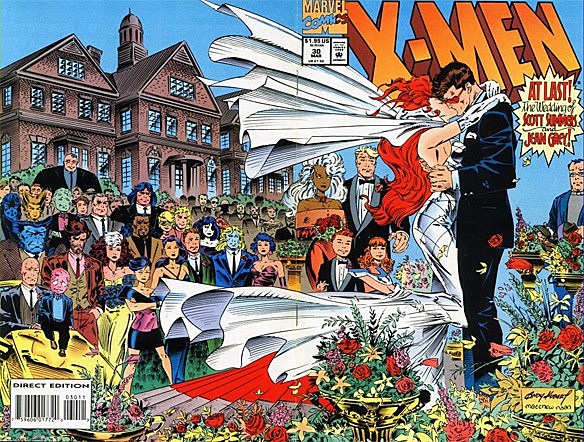 I'm not even gonna try to lie on this one: My attachment to this issue is based entirely on nostalgia. See, this was the first back issue I ever bought.

I was in 7th grade, and as you might expect from the fact that I was twelve years old at the time, I loved the X-Men. And from the fact that this story takes place in 1994, you can probably also guess that, like a lot of people my age, I got pulled into the franchise by the cartoon that was running on Fox Kids. Originally it was just something to watch while Batman: The Animated Series wasn't on, but I was right in the target demographic for that stuff to grab hold of my imagination like nothing else.

I mean, have you seen the X-Men? This one dude has knives coming out of his hands, and this other dude? He touches stuff? And then it explodes. Obviously, it was the best thing that had ever happened, and the paperback I picked up at a middle school book fair where they fought Arcade (another life-long favorite) pretty much cemented that idea in my mind. But for whatever reason, I never really had that many X-Men comics until I was older.

I'm not really sure why. If I had to guess, I'd say it was because I was growing up in a relatively small city in South Carolina that only had one comic book shop, one of those storefront jobs that popped up during the boom with a slightly off-model painting of Punisher and Wolverine on the window and most of the floorspace taken up by used romance paperbacks. Could be that they just sold out before I got there.

Whatever the reason, the only X-Men comics I can really remember were the giveaways from Pizza Hut -- which were awesome, but that's another column -- and a copy of Uncanny #303 that I got from a board game. But somehow, whether it was from reading about it in Wizard or hearing people talk about it at school, I knew that X-Men #30, which I'd missed when it came out a few months before, had the wedding of Scott and Jean, and that this was A Big Deal. So clearly, I had to have it.

When I couldn't find it at the store, I ended up buying it from a classmate who soaked me for six bucks -- three times the cover price! But it was the first time I'd ever had that fun of hunting down a book, and when I read it -- which I did, over and over because I only had six comics with my new favorite characters in them -- I loved it, despite its shortcomings.

And folks, they are short. 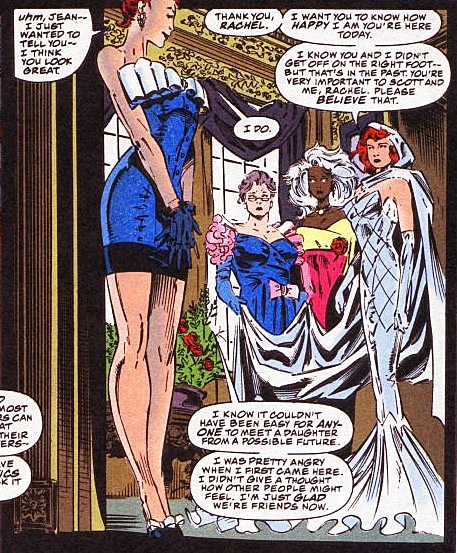 While Lee and Kirby's wedding story is action packed from the first page, Fabian Nicieza, Andy Kubert and Matt Ryan offer one up that's soaked in drama so melo that it might actually be in a coma. I mean, this thing opens up with a full page letter from Wolverine explaining why he won't be attending.

Incidentally, Logan waxes a little poetic in his letter to Jean, claiming that she and Scott go together "like fire and ice," because "one can't exist without the other." Wolverine may be the best there is at what he does, but apparently "what he does" doesn't involve writing metaphors.

Even beyond that, though, this is a comic that is very much Of Its Time, which is readily apparent from the fashions on display. I'm pretty sure that Jean has taken Mary Jane Watson's wedding gown and decided that it would be a good idea to add Moon Knight's hooded cape, but I'll be damned if I even know where to begin talking about Rachel's mini-dress here. That thing has a five-level bow. The mind boggles.

Speaking of Rachel Summers, it's worth noting that the guests of the Grey-Summers wedding include two of the bride and groom's children from alternate dystopian futures.

Of course, Scott's first wife, the clone of his second wife from whom I'm not sure he was ever actually divorced, declined to attend. And if those two sentences don't pretty much sum up the X-Men of the '90s, then I'm not sure any two could. Maybe I should've thrown a "focused totality" or two in there to be sure.

The entire issue feels like an exercise in somehow trying to be even more interminable than a real-life wedding, and on that front, Nicieza and Kubert succeed with flying colors. But there are a few moments that stick out.

For instance, when Jean lifts Professor X out of his wheelchair with her powers so that he can dance with her: 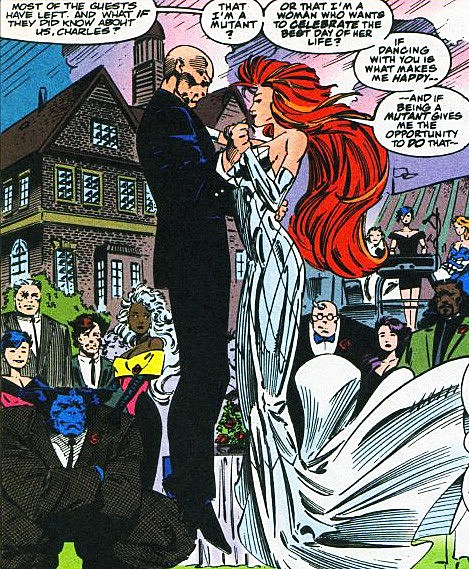 It's actually a pretty sweet moment, and a nice touch on the part of the creators. Except that when Jean starts to lift him up, Professor X has a momentary freak-out about how the wedding guests who don't already know are going to find out that they're mutants.

Seriously, guys? The Beast is there. He is in that panel. And he is not the only dude with blue skin at this wedding. And also Rogue grabbed the bouquet by flying. And then Gambit exploded all the groomsmen so that he could get the garter. I'm pretty sure the cat has shredded that bag to confetti by now, son.

The one that really sticks with me, though, is the first dance of the Bride and Groom, played by Lila Cheney who... you know what? Just wiki it, we'll both be happier that way. 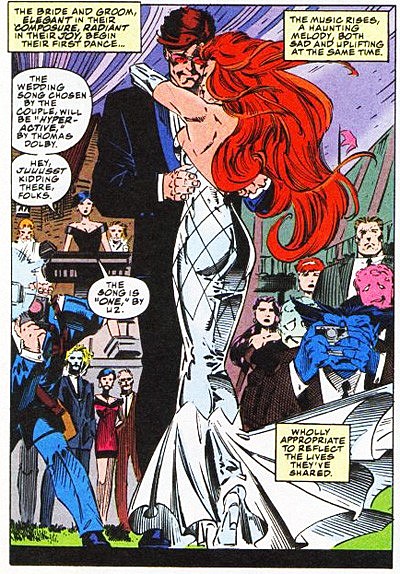 The song, as mentioned in the panel above, is "One," and that's a little piece of trivia that was burned into my mind from reading this comic over and over as a kid. Here, have a listen:

Nice tune. Very appropriate for a wedding rooted smack dab in 1994. But the thing is, when I was 12, I didn't listen to U2. I had no idea what that song sounded like.

But I did listen to Metallica, and they had a song called "One." So for me, the first dance of Scott Summers and Jean Grey's marriage, the "haunting melody, both sad and uplifting at the same time," has always been this (and skip to 4:30 for the really romantic bit):

You have to admit, it fits the description.